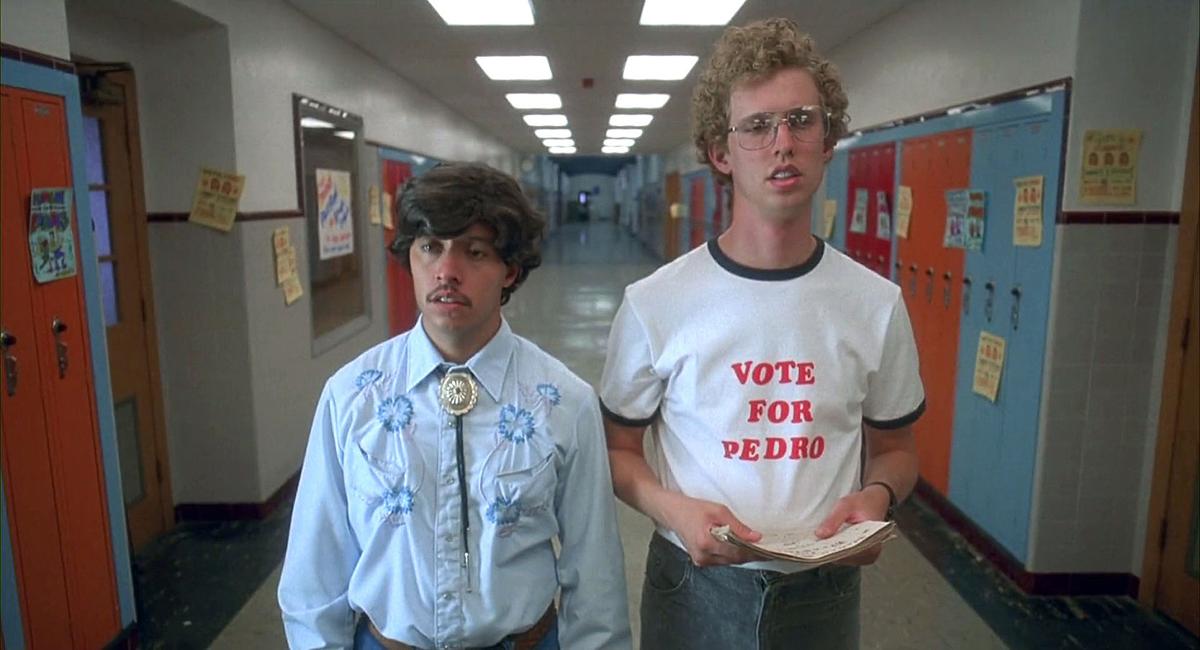 Special to the Sentinel Jon Heder, right, and Efren Ramirez are shown as Napoleon Dynamite and Pedro Sanchez during a scene in "Napoleon Dynamite," which was released in 2004. 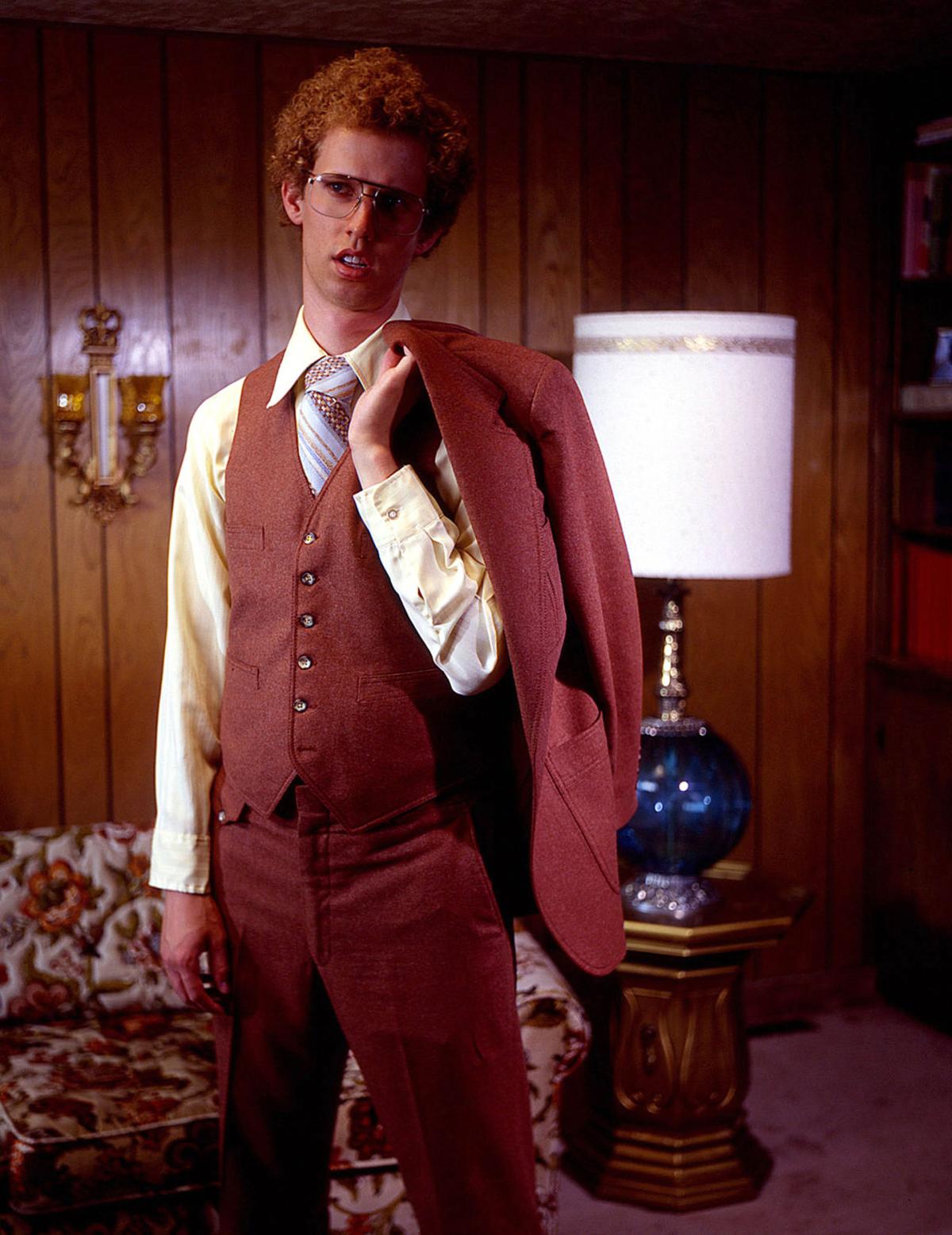 (NYT9) UNDATED -- July 9, 2006 -- IDAHO-NAPOLEON -- Jon Heder starred in the 2004 film, "Napoleon Dynamite." More than 300 people traveled from as far away as California and Connecticut for the chance to embrace their own inner Napoleon in the town of Preston, Idaho for the second annual Napoleon Dynamite festival in July 2006. "Napoleon Dynamite" was filmed for $400,000 and featured no Hollywood stars and won no big awards. But the film struck a chord with moviegoers, particularly college students, garnering $44 million at the domestic box office. (Aaron Ruell/Fox Searchlight Pictures/The New York Times)**ONLY FOR USE WITH STORY BY LAURA M. HOLSON SLUGGED: IDAHO-NAPOLEON. ALL OTHER USE PROHIBITED.

Special to the Sentinel Jon Heder, right, and Efren Ramirez are shown as Napoleon Dynamite and Pedro Sanchez during a scene in "Napoleon Dynamite," which was released in 2004.

(NYT9) UNDATED -- July 9, 2006 -- IDAHO-NAPOLEON -- Jon Heder starred in the 2004 film, "Napoleon Dynamite." More than 300 people traveled from as far away as California and Connecticut for the chance to embrace their own inner Napoleon in the town of Preston, Idaho for the second annual Napoleon Dynamite festival in July 2006. "Napoleon Dynamite" was filmed for $400,000 and featured no Hollywood stars and won no big awards. But the film struck a chord with moviegoers, particularly college students, garnering $44 million at the domestic box office. (Aaron Ruell/Fox Searchlight Pictures/The New York Times)**ONLY FOR USE WITH STORY BY LAURA M. HOLSON SLUGGED: IDAHO-NAPOLEON. ALL OTHER USE PROHIBITED.

Want to ask a girl to a dance? "Build her a cake or something."

Need to apologize? "I caught you this delicious bass," should do the trick.

Hungry for a snack? "Make yourself a dang quesadilla."

Casting a ballot? "Vote for Pedro."

It's an assortment of quirk that fans still relish 15 years after the film was released. If you are one of those fans who has been saving up questions about "Napoleon Dynamite," now is your chance to ask away.

Jon Heder, who starred as the film's lead character and namesake, will be in Grand Junction for a "Napoleon Dynamite" screening and Q&A on Friday, March 15, at Avalon Theatre, 645 Main St.

"I hang out and twiddle my thumbs through the entire movie," joked Heder in a phone interview on Wednesday. He loves the movie, no question, but he has seen it a few times.

And after the film winds up with the tetherball scene between Napoleon and his friend Deb, Heder will take the stage for all those questions.

"It's not very formal. I have a blast," he said. "People can just ask whatever. We get goofy and kind of mess around. I just want people to have a fun time."

By now, Heder has taken all kinds of questions about the movie and Napoleon, as well as questions that have nothing to do with the film, such as "If you were God, what's the first item on your agenda?"

Usually, Heder said, those unusual questions come at conferences like Comic-Con and from folks who probably don't know who he is and just want to kill time between other things.

Then again, you never know when someone will whip out a well-worded question that makes you think, he said.

The big fans, the legit fans, want to know more about Napoleon, an oddball teenager who wears moon boots no matter the weather and navigates the world through half-shut eyes, and his older brother Kip, who at 32 still lives with his grandma and chats with babes online all day.

They want to know about Pedro, who becomes Napoleon's best friend, isn't daunted by popular girls and runs for class president. And they ask about Uncle Rico, who can't stop himself from throwing footballs at camcorders and dreaming about going back in time — warning: Never buy a time machine online. And there's Deb, Napoleon's sweet, maybe crush with a side ponytail.

Heder said he never created a backstory for Napoleon. Given that Napoleon and Kip live with their llama-loving grandma, perhaps their parents died in an accident, he said, but that's not the definitive word on the subject.

"I just left that a mystery," he said, and Jared Hess, who co-wrote and directed the film, never sat Heder down for an explanation.

You can tell from the film's storyline that Napoleon, Kip and their grandma aren't well off, but there's no complaining about that, Heder said.

Napoleon is the "forever younger brother" who gets the short end of the deal and "he kind of lived in his own world," he said.

While "Napoleon Dynamite" gives the impression of being spontaneous at times, it was actually "pretty darn scripted," Heder said.

One scene with Kip and Uncle Rico might have a moment of ad-lib, but for the most part, Hess "really mapped it all out," Heder said.

Even Napoleon's signature long, irritated sigh — "that's all he can muster" — was scripted. Hess demonstrated what he wanted, and Heder made it happen.

It was all part of the beauty of Hess' vision for the film, which isn't quick-paced, especially in terms of the dialogue, and includes moments from Hess' life, Heder said. (See: Cow being shot as a school bus of kids goes by.)

But the dance at the film's climax is totally Heder.

"That was all freestyle," Heder said.

Among his college friends — Heder was attending Brigham Young University when "Napoleon Dynamite" was made — he had developed a reputation for just pulling out the dance moves.

"I always enjoyed getting funky," he said.

So when the script called for Napoleon to dance to "Canned Heat" by Jamiroquai and help out Pedro's campaign for class president, Heder went for it.

Of course, he had no idea then that the dance or the film would become such a hit.

"I was really just stuck in the college bubble," he said.

He thought the script was great, but "at the time I really wasn't thinking big," he said.

It was a low-budget, independent film. They did all their own stunts — jump the fence! Ride the horse! — and Heder thought, "OK, maybe this will play in a couple festivals."

Then "Napoleon Dynamite" was screened at the Sundance Film Festival. Hess and one of Heder's brothers who had to moved to Los Angeles to pursue acting told Heder, "Jon, just so you know, you will probably be approached by an agent."

And the whirlwind took off from there, Heder said.

Heder's latest film project was "When Jeff Tried to Save the World," which was released in December, and he has done plenty of voice work in recent years. The Disney animated series "Pickle and Peanut" is among his favorites.

"One of these days people are going to realized how awesome 'Pickle and Peanut' is," he said. "It's going to find its cult audience at some point."

However, in some ways he really is a "living Napoleon," Heder admitted.

He actually drew a picture of his wife when he asked her to marry him. Fortunately, it was a much better drawing than Napoleon's dance invitation to Trisha — "It took me like three hours to finish the shading on your upper lip. It's probably the best drawing I've ever done."

Heder's proposal drawing actually looked like his wife, as opposed to the inbred Sasquatch drawing he did for the film, he said.

In many ways, "Napoleon Dynamite" is a "personal film," Heder said. It's personal for him, for Hess and the many others who worked on it, and it has become personal for the fans who continue to watch it, quote it and dance.

So don't be afraid to ask: "What are you gonna do today, Napoleon?"

Watch the 2004 film "Napoleon Dynamite" and then enjoy a Q&A with actor Jon Heder, who starred in the film's lead role.

Tickets can be purchased at monumentaltix.com.