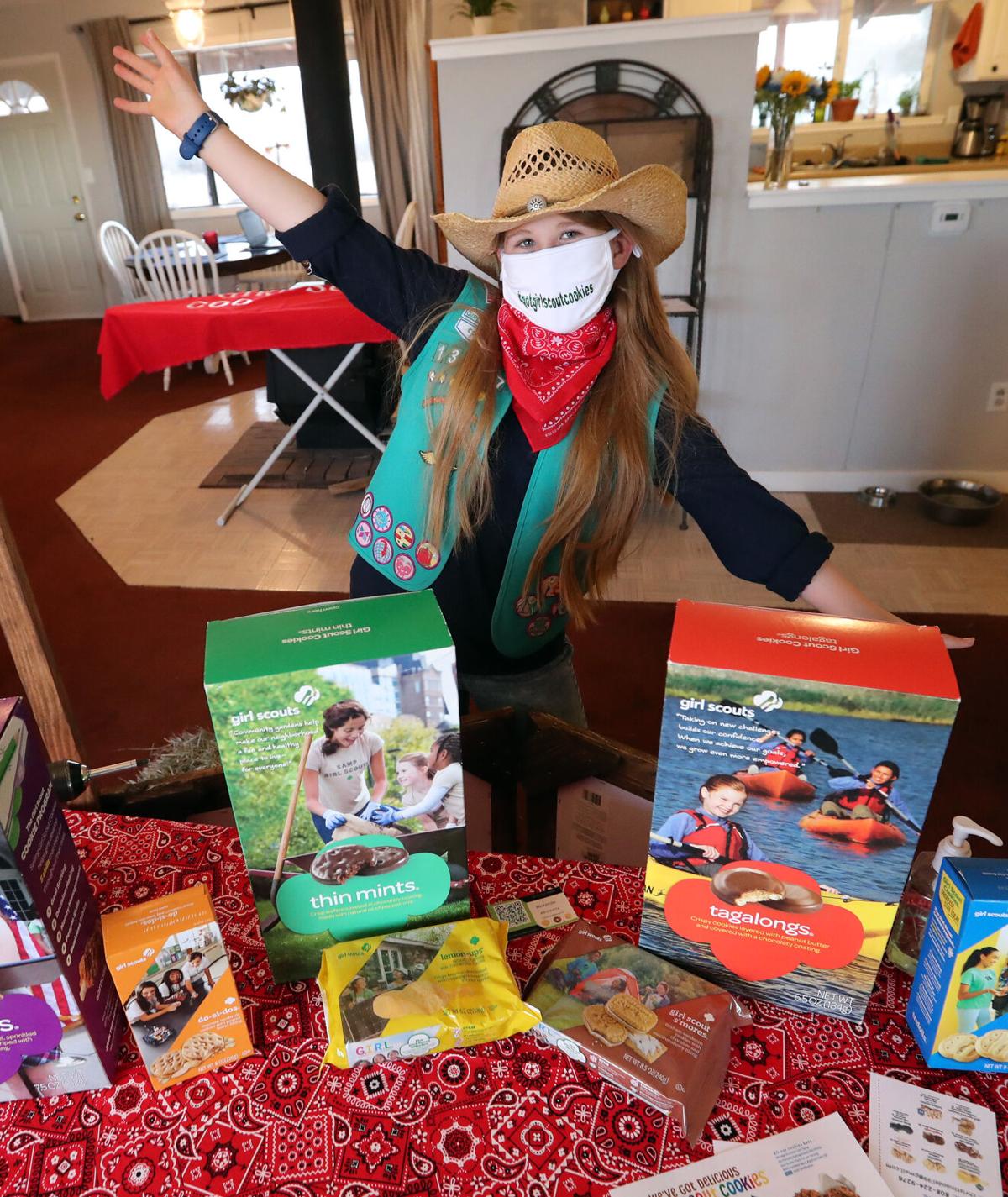 McKenzie, 11, can hardly wait to start selling Girl Scout Cookies on Sunday, Jan. 31. Her goal is to sell 1,000 packages this season. 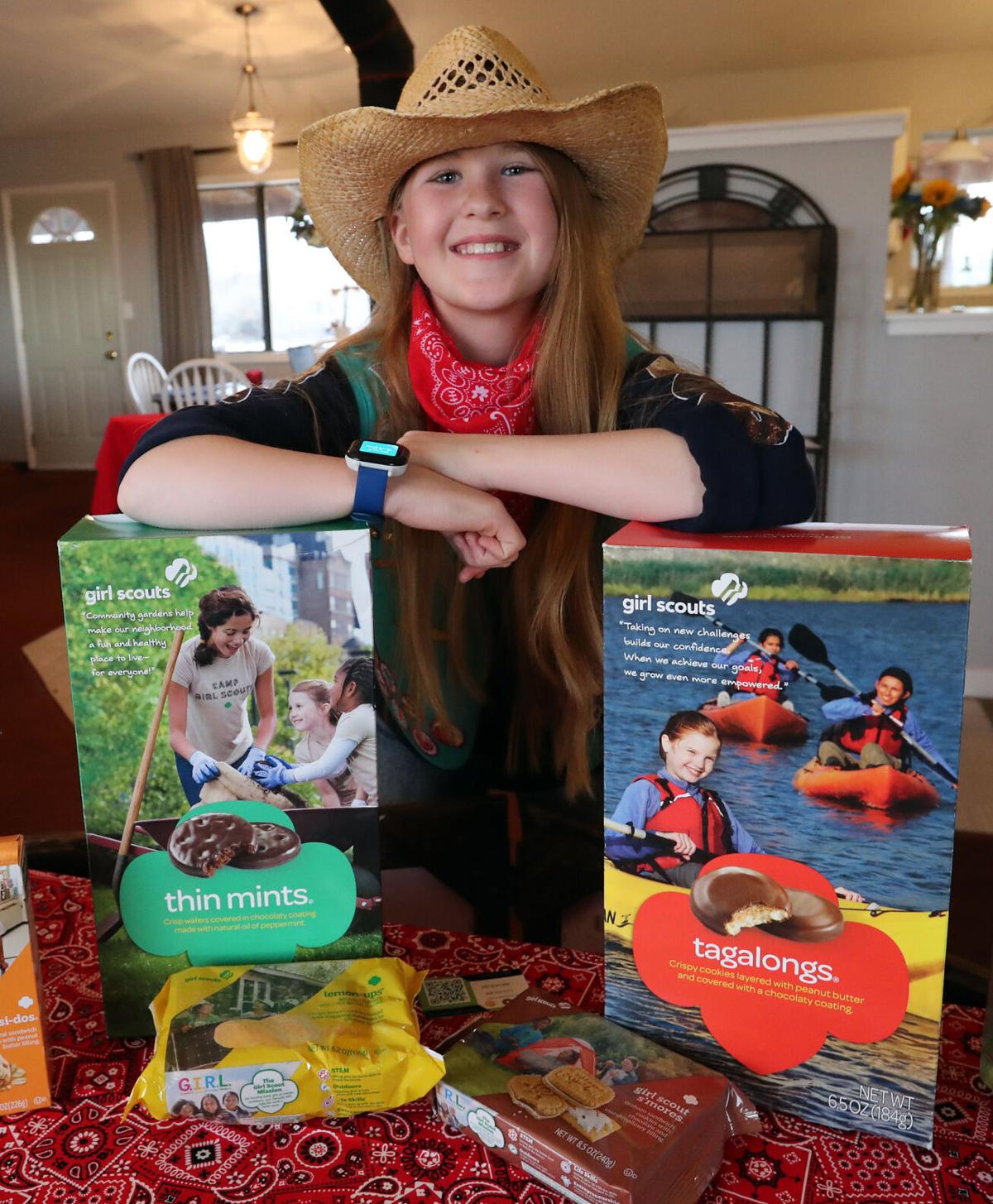 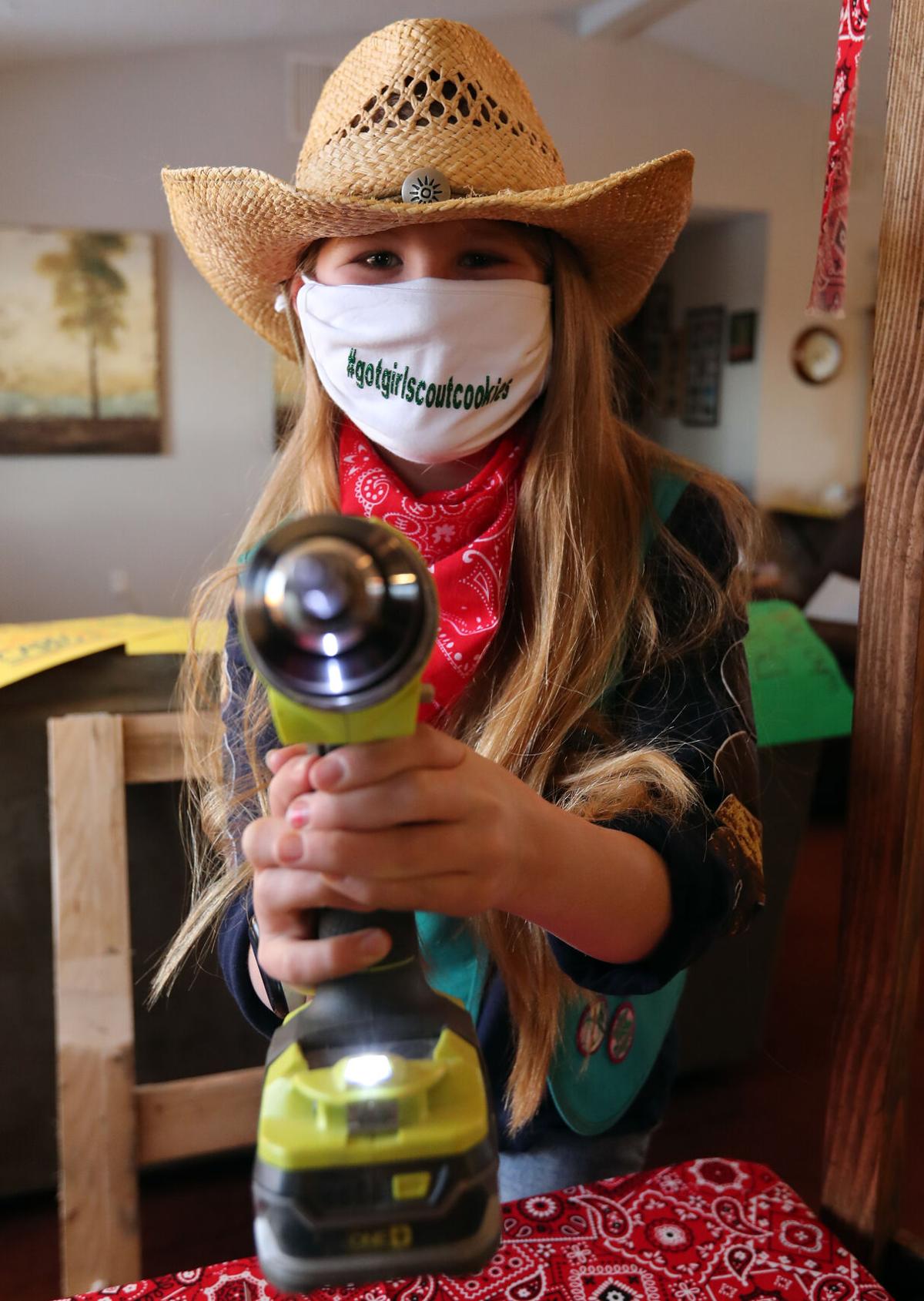 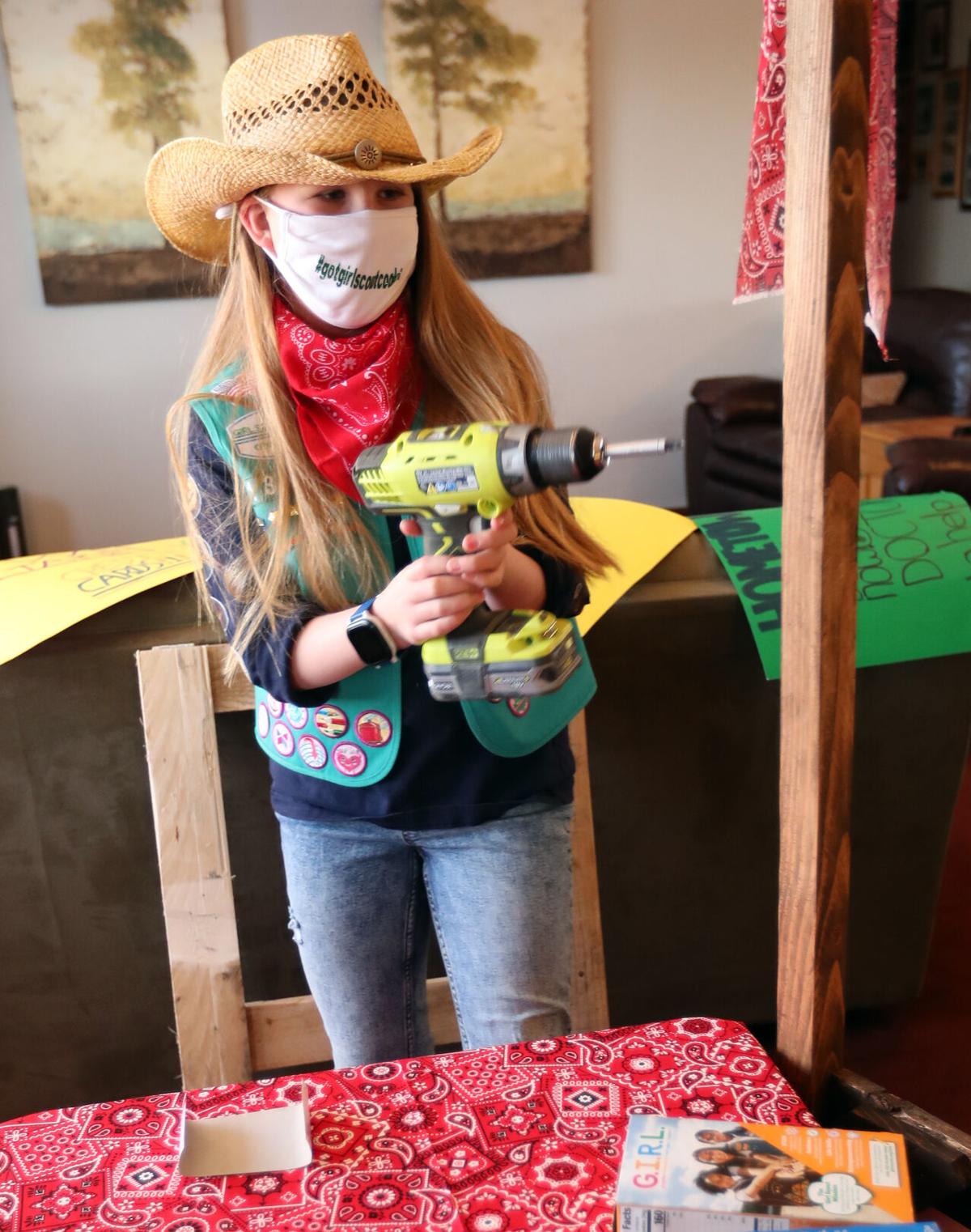 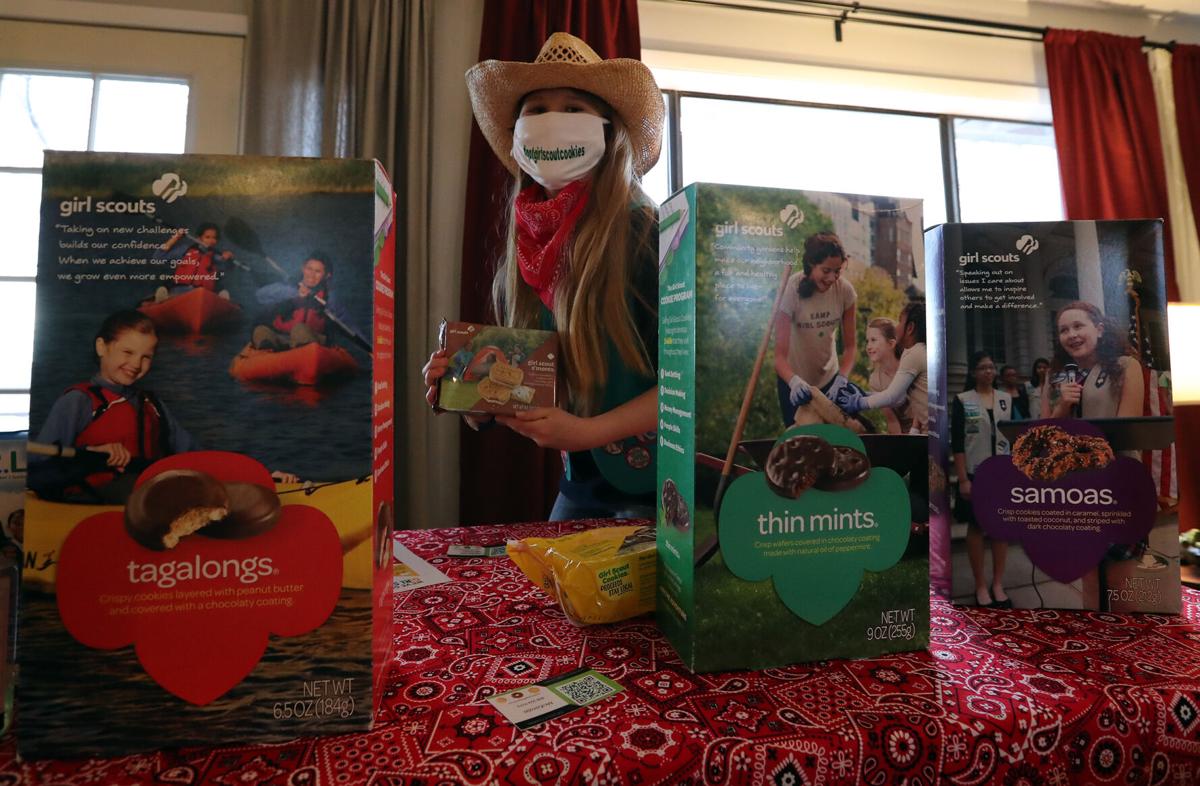 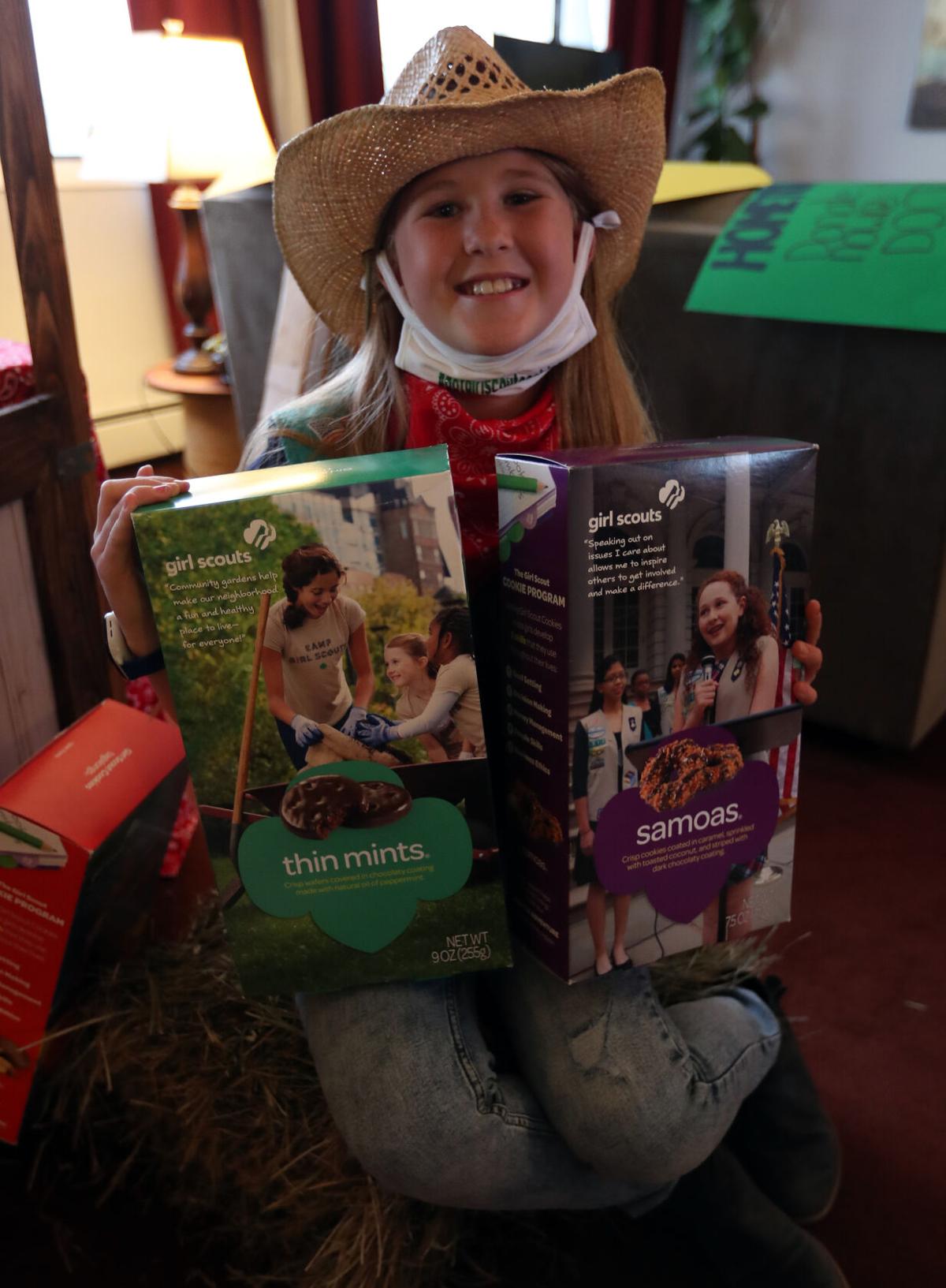 McKenzie, 11, can hardly wait to start selling Girl Scout Cookies on Sunday, Jan. 31. Her goal is to sell 1,000 packages this season.

The 11-year-old is nearly finished decorating her cookie booth and is eager for the first day of cookie sales — Sunday, Jan. 31 — to arrive so she can start selling friends and strangers on the merits of Thin Mints or Lemon-Ups.

She also has a message for her Girl Scout sisters who might feel daunted about selling cookies during a pandemic.

“We can do this, Girl Scouts! We have this Cookie Season!” McKenzie said enthusiastically. COVID-19 is here, but “we can break through that barrier. We can do this!”

McKenzie is part of Girl Scout Troop No. 13497 and is in her sixth year as a Girl Scout. Well-spoken and exuberant, McKenzie had plenty to say earlier this week about Cookie Season and Girl Scouts.

JOINING THE CLUB: “I joined Girl Scouts because I thought it was going to be a fun opportunity for me and my friends. I was really young. I didn’t actually live here when I joined Girl Scouts. I was in Massachusetts,” McKenzie said.

She and her mom started a troop and invited her friends to join. “I remember it so well. It just has had such an impact on me. I’m still good friends with many of those girls,” she said.

McKenzie and her family moved to the Grand Valley about four years ago, and after a year doing Girl Scouts on her own, she joined a local troop.

PLAYING FAVORITES: “Oh, that’s a tough one. I am deeply attached, one might say, to the chocolate cookies: Samoas, Tagalongs and Thin Mints … although I do think that Samoas and Thin Mints rank a bit higher than Tagalongs, but not by much.”

BESTSELLER: “I think that every cookie is very popular” she said.

But the cookies preferred most by all Girl Scouts and “everyone really” are Thin Mints. “It’s a big favorite. I mean, who doesn’t love a good Thin Mint?”

MOST BOXES SOLD: McKenzie sold 1,500 packages of Girl Scout Cookies last year. Her goal was 650 and when she reached it she had to bump up her goal, then bump it up again.

She was selling cookies to the stylists at a downtown salon and then received permission to approach some of the clients having their hair done, McKenzie explained.

One of those clients asked how many more boxes McKenzie needed to sell to reach her goal. Seventy-five, McKenzie told the woman, who then promptly purchased that many boxes. It was most the packages of cookies purchased by a single buyer in McKenzie’s selling history.

“I was stunned because I actually didn’t think she was going to buy any. She bought 75 packages and told me to distribute them to anybody who walked by for free,” McKenzie said. “I almost cried, I was so shocked. I was overwhelmed. That meant I was going to meet my goal. She was so generous!”

And then McKenzie went out of the salon and began giving the boxes of cookies to people walking by. Some people didn’t believe her that the cookies were free.

They would say, “Oh, no thank you. I don’t have any money.” To which McKenzie would reply, “‘No, seriously! They are absolutely free! No contract!’ One lady actually had a tear of joy in her eyes. I don’t think I’ve ever had such a good time selling cookies.”

SECOND FAVORITE COOKIE STORY: A couple years ago, McKenzie was selling cookies at Grand Valley Books on Main Street. She asked a man if he would like to buy some cookies and he said, “Oh, sure. I’ll buy a few.”

He was trying to buy cookies that both he and his wife would like and wasn’t sure which ones to get. He kept asking McKenzie, “Well, what do you think?”

McKenzie tried to explain the attributes of the different cookies: If you’re more of a peanut butter person, you should try the Do-si-dos or Tagalongs. If you like lemon, then try Lemon-Ups. And so on.

“He ended up buying a bunch of Lemon-Ups … and so many Trefoils. I think he got a whole case of Trefoils,” she said, noting that there are 12 boxes of cookies in a case.

When everything was settled, the man had purchased two and a half cases of cookies, at which point his wife walked up and asked, “what are you doing?”

“I so vividly remember it because I had to actually help him bring the cookies to his car,” McKenzie said.

As for what the man’s wife thought of the whole thing: “She either thought, ‘Yes!!!’ or ‘What the heck?’ ” McKenzie said.

REASONS TO BUY: Girl Scout Cookies are “delicious and they will brighten your day,” McKenzie said.

The “in-depth” reasons to buy are “we are saving up money for things such as Girl Scouts camp or camping trips … helping the community is the biggest reason to support Girl Scouts,” McKenzie said.

She tries to thank everyone she talks with for buying cookies from her or another Girl Scout. “Buying from one of us is like helping out all of us. Thanks, everyone!”

SALES PITCH: “You can’t sit there and wait for people to come to you. If you go out and ask, there are people who will admit to you that they wouldn’t have bought unless someone had come up to them and asked,” McKenzie said. “I find that it is best to talk to people and the most fun.”

COOKIE MONSTER: The biggest cookie monster at McKenzie’s house is “me, probably me. Or my dad, for sure. My dad is definitely big on the Samoas.”

SNEAKY, SNEAKY: Do you ever sneak Girl Scout Cookies? (McKenzie was shockingly tongue-tied at this question.)

“Yes, she does!” came the answer, supplied by McKenzie’s mother in the background.

“It’s our favorite after-school activity,” admitted McKenzie about herself and her cousin. “I’m kidding!”

The two of them have even created their own Girl Scout Cookie treat: the Thin Mint Ice Cream Milkshake. It includes Thin Mints, leftover ice cream cake, vanilla ice cream and milk. Blend those together and then “drink as much of it as you possibly can,” McKenzie said.

She recommended adding some green food coloring to the milkshake for St. Patrick’s Day.

NEW COOKIE: If wishes could make cookies, McKenzie knows just what cookie she would wish for the Girl Scouts to add. “I think they should make a sugar- free cookie for people with diabetes,” she said.

She has a customer who buys cookies each year for her family, but can’t eat them herself because she has diabetes. “I wish there were Girl Scout Cookies that she could eat,” McKenzie said.

COVID CHANGES: As with many things, the pandemic has moved many Girl Scout meetings and activities online. “Recently, we earned the first aid badge online,” McKenzie said.

When the weather was warmer, they were able to do some things outside with masks, but since it is winter they are back online a lot, she said.

And they come with a side perk: “I now know all my Girl Scout sisters’ pets!”

Editor’s note: To honor Girl Scouts of Colorado’s policy of not releasing Girl Scout’s last names, McKenzie’s last name was not used in this story.

It’s time to Do-si-Dos for those Samoas or Thin Mints because Girls Scout Cookie Season is nearly here.

Girl Scouts across the Grand Valley will begin their annual sales on Sunday, Jan 31, and there are a number of ways customers can pick up a box or two or 10.

“We will be selling in some new and creative ways,” said AnnMarie Harper, public relations director for Girls Scouts of Colorado.

Drive-thru cookie booths will be popping up around town, she said. Customers can find them by texting COOKIES to 59618 or by using the Girl Scout Cookie Finder app.

Customers who would prefer to order through a Girl Scout they know should reach out to her and get the link to her specific cookie sales website, Harper said.

Porch delivery also can be arranged for customers purchasing through a Girl Scout, she said.

Customers who don’t know a Girl Scout can be connected with a troop in their area by going to girlscoutsof- colorado.org/cookies beginning Monday, Feb. 1.

Those customers can order online, and cookies will be shipped to the customer’s home or donated to the military or a nonprofit.

Beginning Feb. 12, customers can go to grubhub.com/food/girl_scouts, place an order and a driver will deliver that order anywhere within a 20-minute radius of the local Girl Scout office at 580 24½ Road, she said.

And finally, Girl Scouts will have booths at many area business as they sell the eight cookie varieties available this year in Colorado, she said.

Girl Scout S’mores and the gluten-free Toffee-tastic will cost $5 per package.

Colorado Girl Scouts receives its cookies from Little Brownie Bakers, which is one of two bakeries that make Girl Scout Cookies, Harper said.

Some other areas of the country receive cookies from ABC Bakers, which offers a couple cookies that are different from what Little Brownie Bakers provides, she said.

To view information about the cookies, as well as to put in your ZIP code and get a list of dates, times and the locations of booths where cookies can be purchased, go to girlscouts.org/en/cookies/all-about-cookies.html.