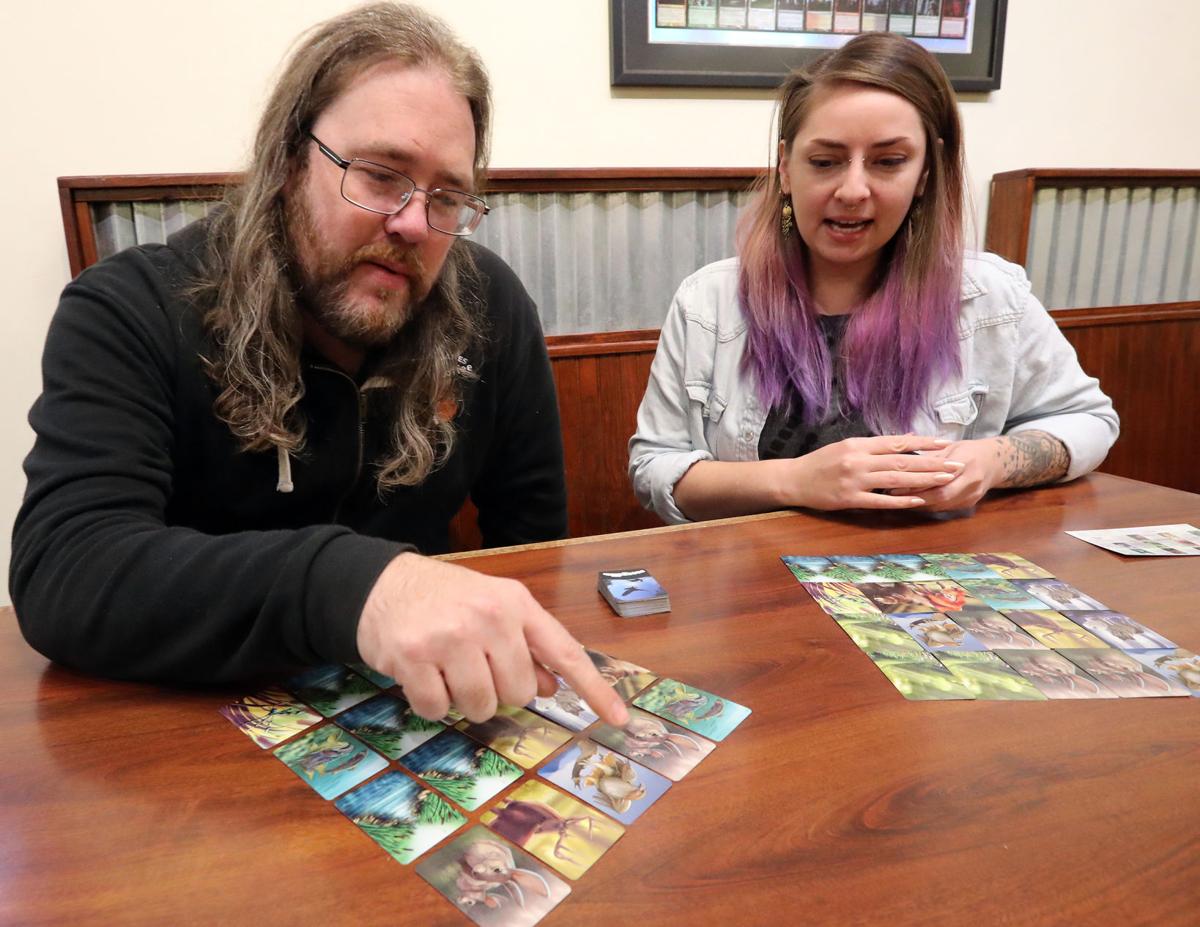 Matt Simpson and Lindsay Falsone play a round of "Ecosystem," a new game Simpson designed with Falsone's artwork. A party and "Ecosystem" tournament are planned for Saturday, Nov. 23, at Board Fox Games, 623 Main St., to celebrate the game that was released Wednesday, Nov. 20. 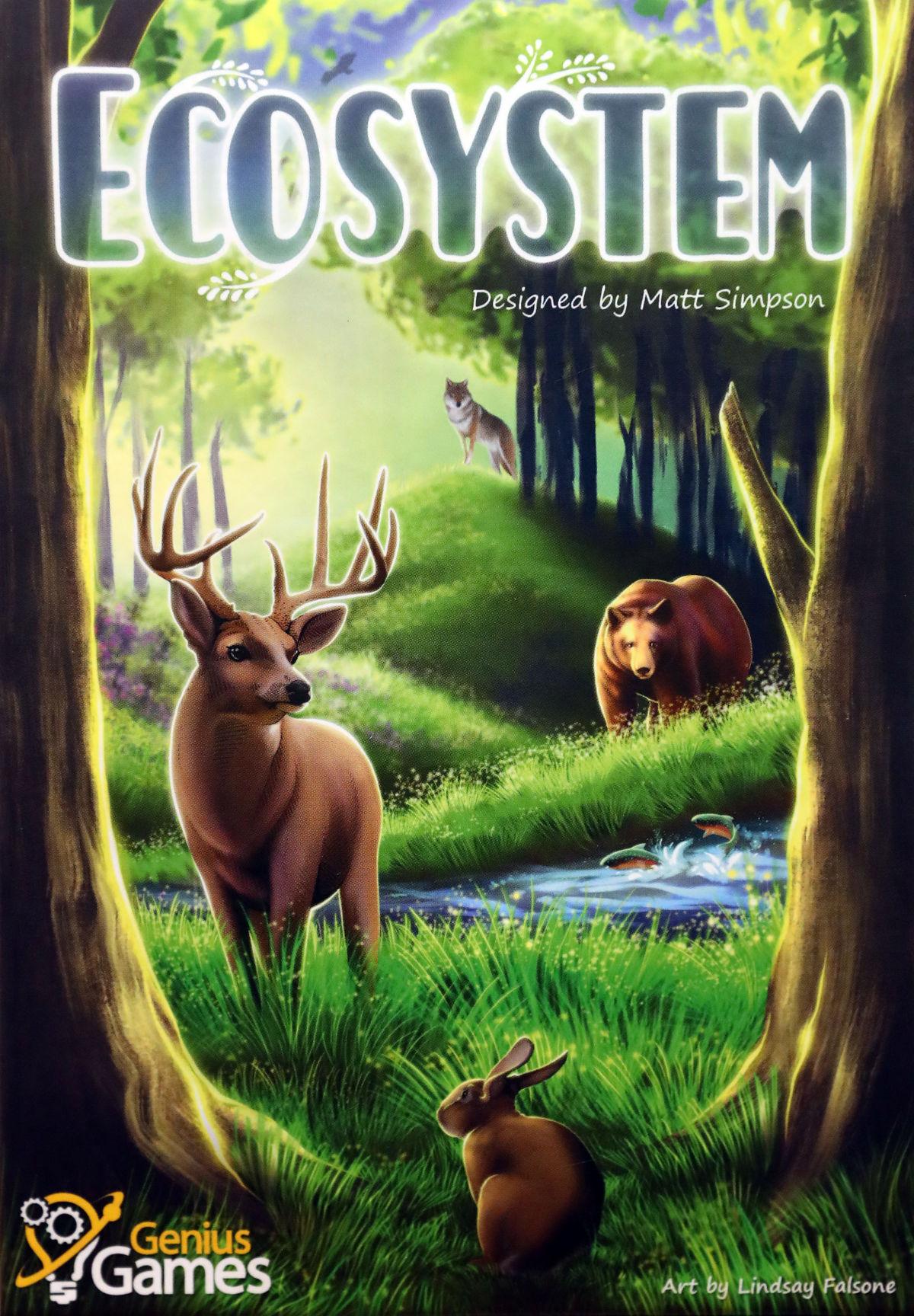 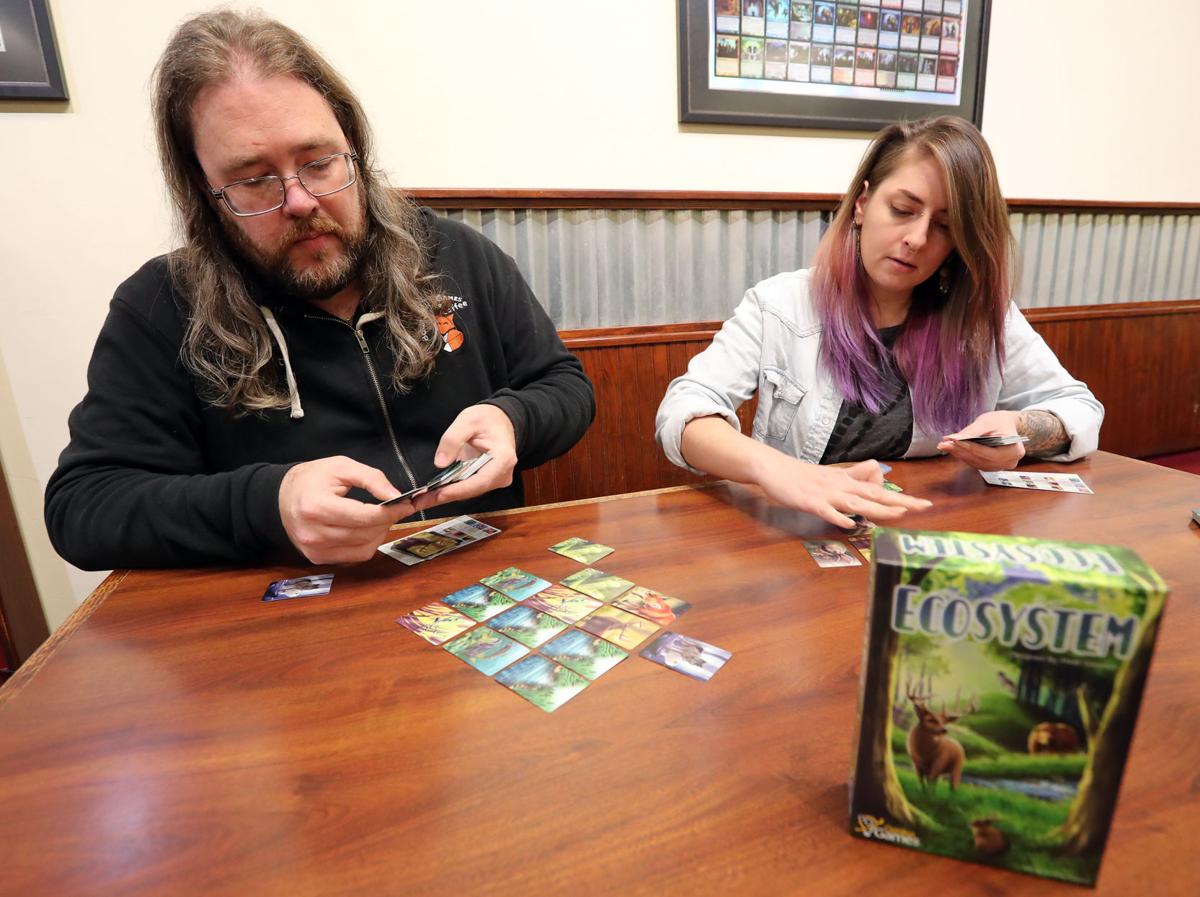 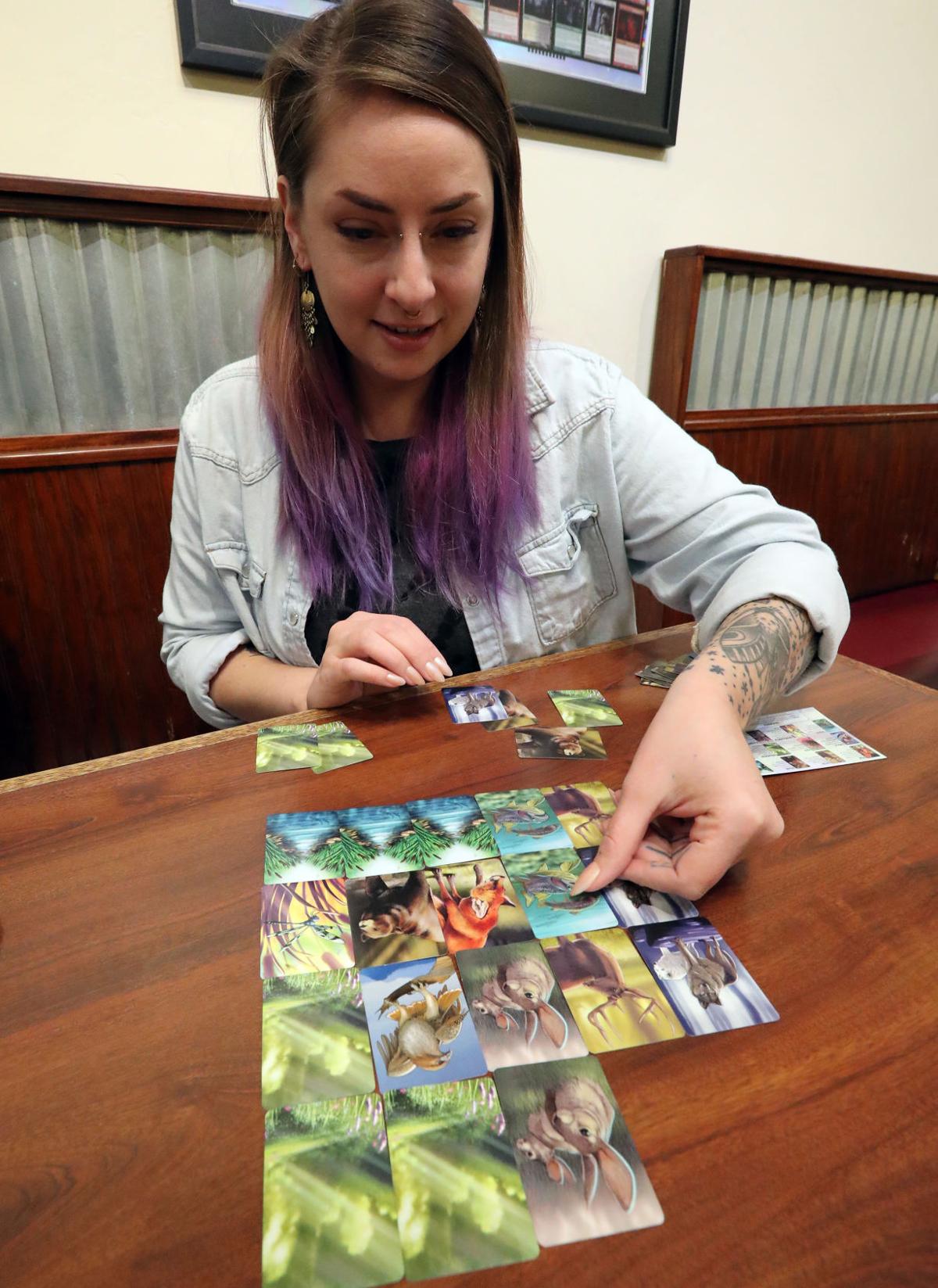 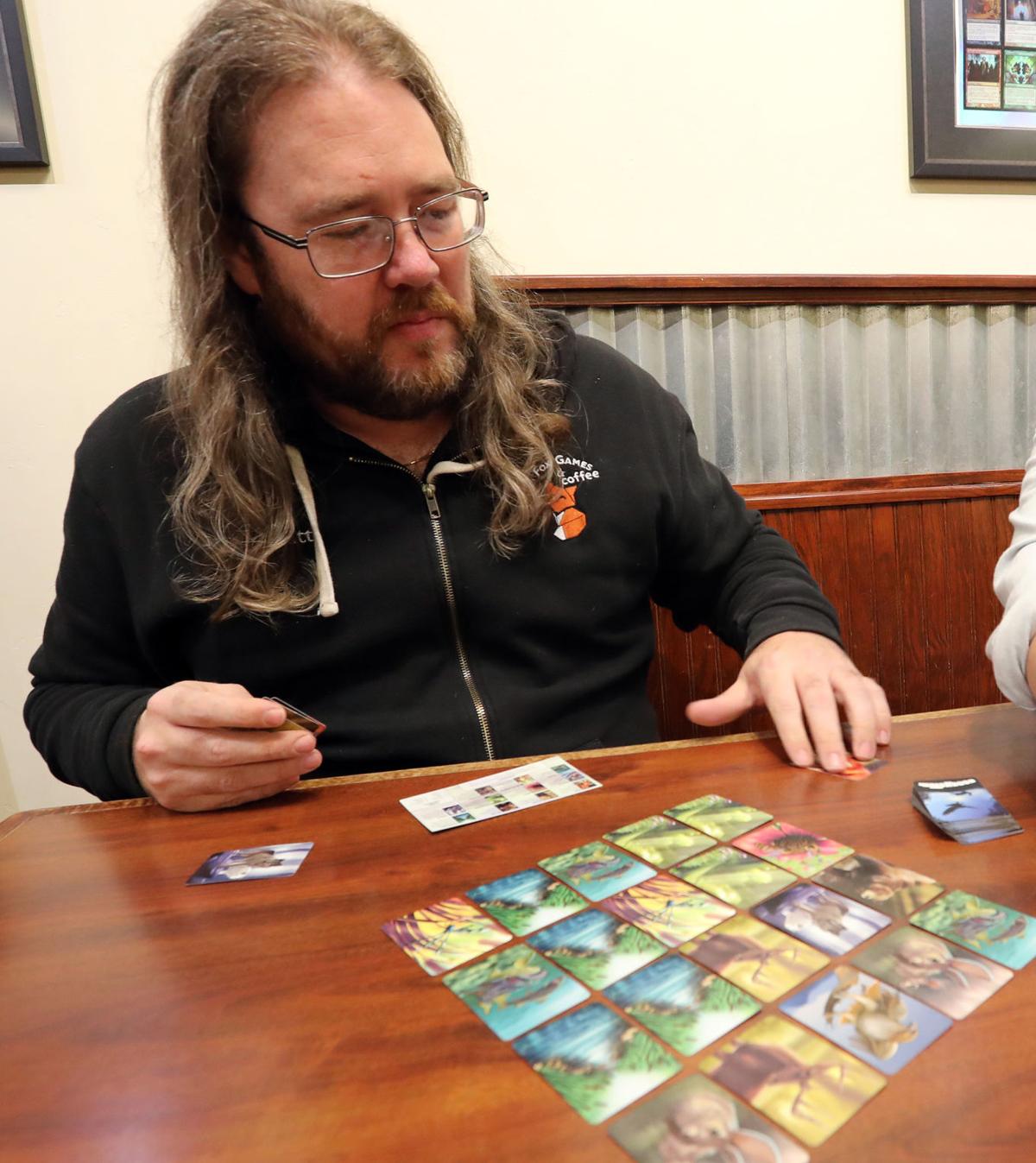 Matt Simpson and Lindsay Falsone play a round of "Ecosystem," a new game Simpson designed with Falsone's artwork. A party and "Ecosystem" tournament are planned for Saturday, Nov. 23, at Board Fox Games, 623 Main St., to celebrate the game that was released Wednesday, Nov. 20.

If games are a language, then Matt Simpson thinks and speaks it.

Board games, card games, tiles and dice, strategy and scoring, they all play out in his mind.

As manager at Board Fox Games, 623 Main St., it's a language Simpson often uses to play or explain the games on the store's shelves.

But now more than every Simpson is speaking his mind. On Wednesday, Nov. 20, Simpson's own game was delivered to the store.

"Ecosystem," designed by Simpson with artwork from local artist Lindsay Falsone, was released that day by Genius Games in the United States and Canada. The game already is for sale in Australia and New Zealand.

"I'm an internationally published artist? What? Crazy!" Falsone exclaimed shortly before UPS delivered the new game, the neat boxes wrapped in a forest scene with a bear, deer and rabbit near a stream.

It was a bit surreal for both Falsone and Simpson to see "Ecosystem" published and shrink wrapped, even though the game's prototypes have been play-tested hundreds of times in the store.

"I just feel like a proud mama bear. They did such an amazing job," said Trudi Wagner, Board Fox's owner and one of those who play-tested "Ecosystem" over and over again.

To celebrate "Ecosystem," Board Fox will host a release party and "Ecosystem" bracket tournament from noon to 2 p.m. Saturday, Nov. 23.

"Ecosystem," which features 11 different card designs created by Falsone, is an educational game with details about a forest's ecosystem integrated into the game's structure.

However, educational wasn't the dynamic or subject Simpson started with when the game began forming in his mind several years ago.

It was more of a science fiction game with spaceships and supply lines, and "it was just too geeky," Simpson said.

He was considering shelving the idea for a while when he spotted Falsone, who was at Board Fox with her boyfriend. Instead of playing a game that day, she was sketching an otter.

The drawing flipped a switch in Simpson's brain, and he realized those spaceships needed to become animals and habitat pictured on cards used by players to build an ecosystem with game scoring based on how those animals interact with each other and their habitat.

Simpson recruited Falsone to create the artwork for the game's cards, and for the past two years they have worked on getting the bugs out of the game, literally.

At one point, while Simpson and Wagner were considering self-publishing the game, Simpson sent some of the artwork for the cards, including that of a dragonfly, to a publishing company rep. The rep happened to also have a degree in entomology and nicely let Simpson know that his "dragonfly" was actually a damselfly.

"Ah, man!" Simpson exclaimed. "None of us were the wiser."

The artwork of the insect's shimmery blue body was beautiful and Simpson wanted to keep the card, but he imagined people would go through the game's cards and say, "wolf, fox, eagle, deer ... damselfly?"

So Falsone reworked the card with a real dragonfly.

In March, Simpson took a prototype of "Ecosystem" to the GAMA Trade Show in Reno, Nevada. Through two connections at the show, Simpson was able to meet John Coveyou, founder and chief executive officer of Genius Games.

The two of them played "Ecosystem," and "he offered me a deal on the spot," Simpson said.

Since then it has been a game of anticipation for Simpson, Falsone and Wagner until Wednesday when they could finally hold copies of "Ecosystem," labeled for two to six players age 14 and older. The age rating is because of European safety testing rules, but "Ecosystem" could be understood and played by 10-year-olds or younger, Simpson said.

"There's nothing to choke on unless you're going to eat a card," Simpson said.

"Ecosystem" plays through in about 15 minutes, meaning there often is plenty of time to play again, Wagner said.

While they're celebrating the release "Ecosystem" now, Simpson and Falsone aren't done collaborating on games.

"We'll have to see how it goes," Simpson said.