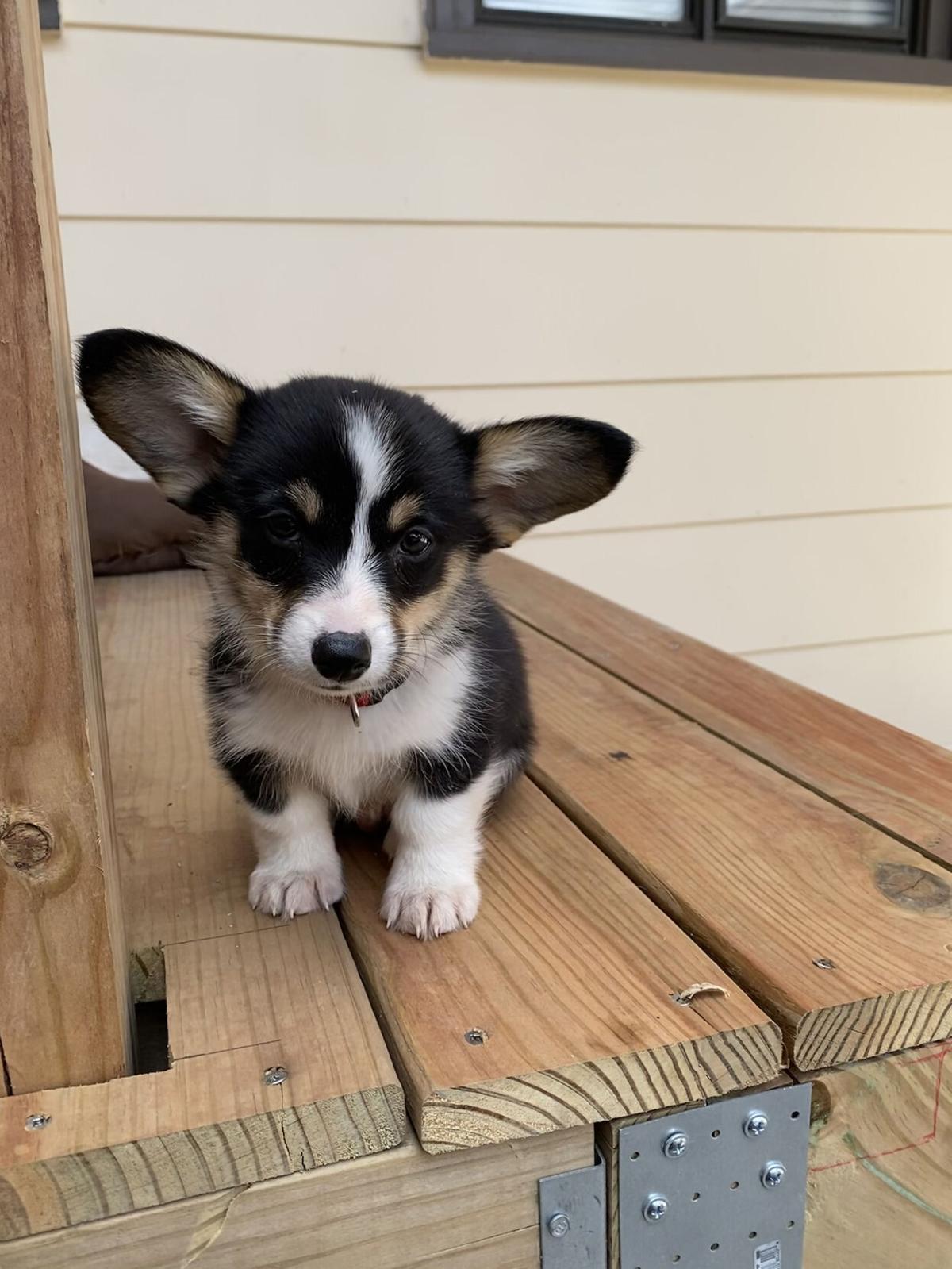 “He’s just the happiest little dog. Very sweet, gets along with everybody,” said Julie Boyd about Roubideau, the Corgi puppy that became part of the Delta family in April. “He just kind of cheered everybody up.” 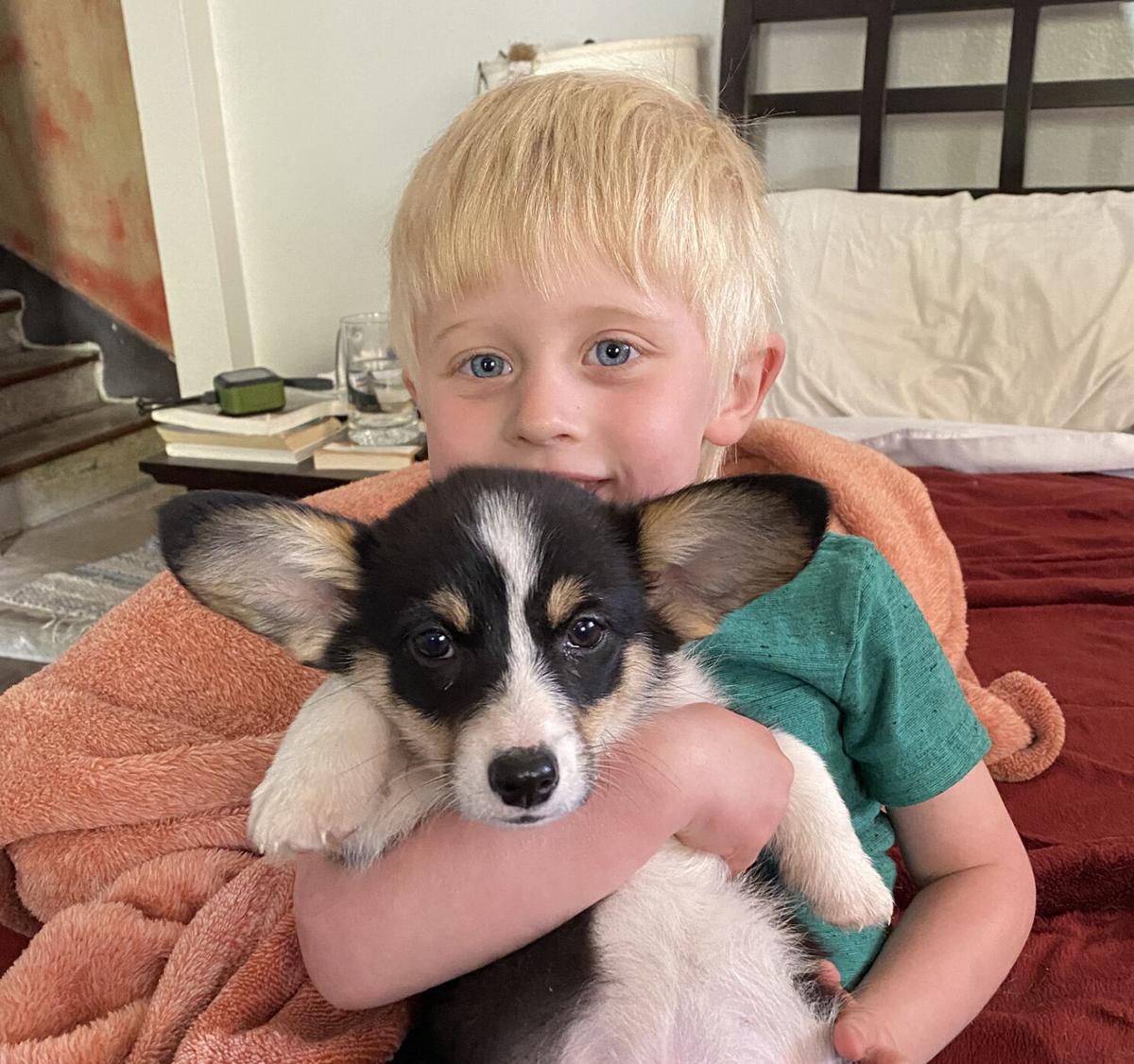 PHOTOS SPECIAL TO THE SENTINEL

Lyman Boyd, 4, holds Roubideau, a Corgi puppy that became part of his family in April. Lyman’s family, who lives in Delta, intended to get a puppy over the summer of 2020, but the pandemic moved up their plans and provided some joy while many things were unsettled because of COVID-19. “He’s just the happiest little dog. Very sweet, gets along with everybody,” says Julie Boyd. “He just kind of cheered everybody up.” 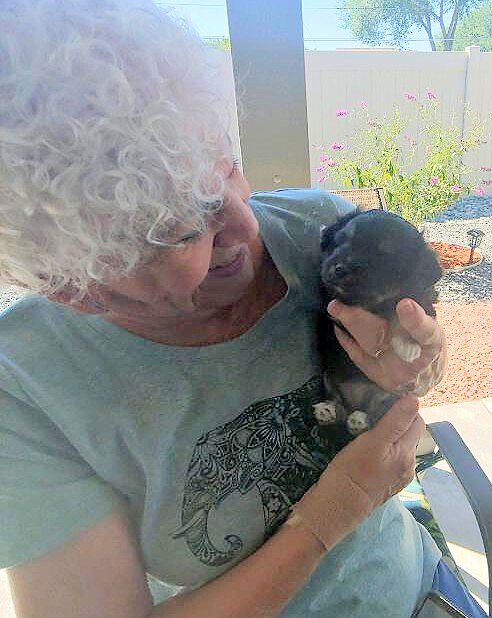 Maggie May is the mini-Aussiedoodle that stole Carol Burshek’s heart. Burshek and her husband, Jerry, are both cat people and have two cats, but the pandemic brought a puppy into their lives. 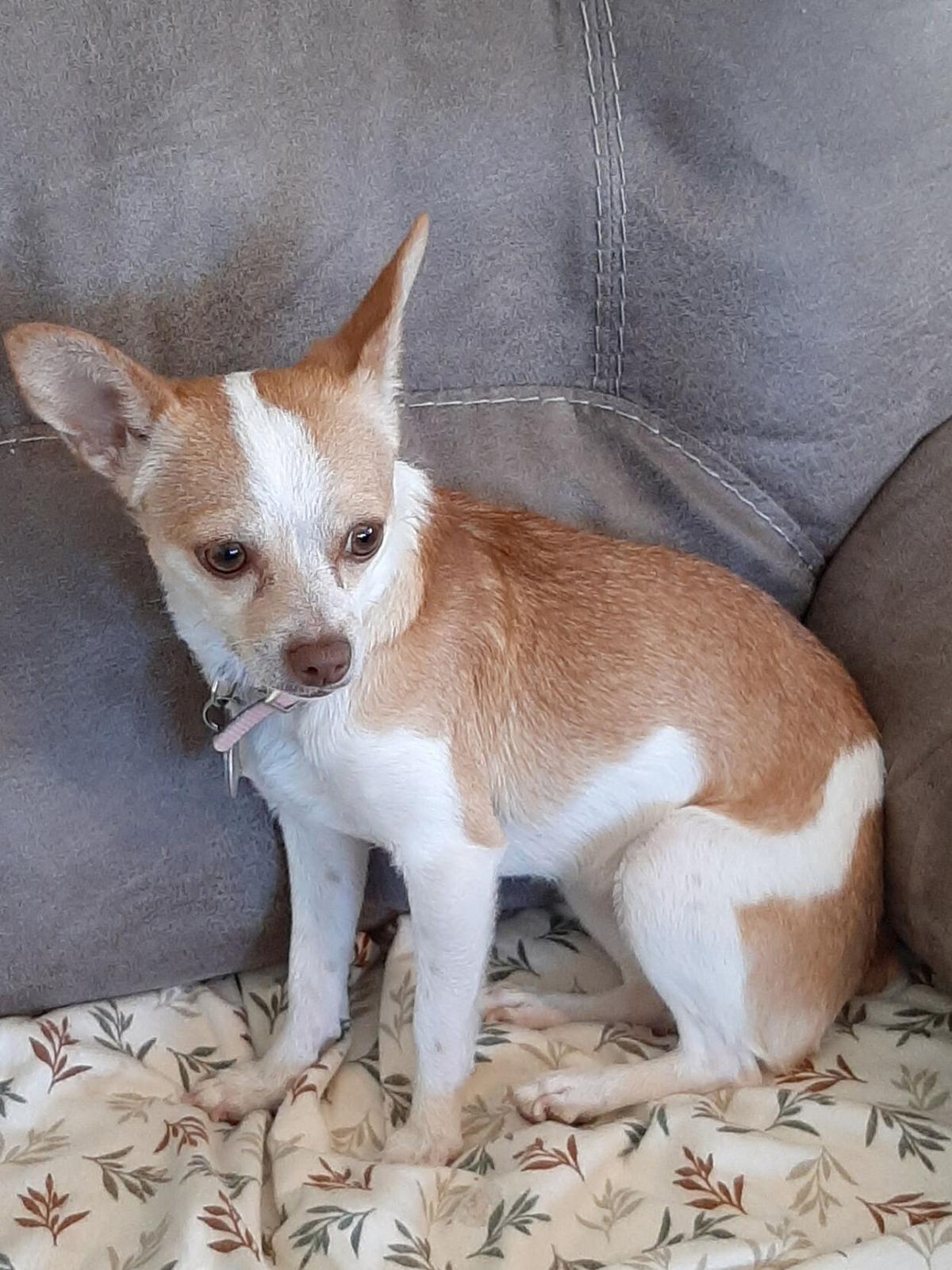 Simone was adopted by Cheryl Munkres from Roice-Hurst Humane Society in April. “I needed something to love and care for,” Munkres said.

“He’s just the happiest little dog. Very sweet, gets along with everybody,” said Julie Boyd about Roubideau, the Corgi puppy that became part of the Delta family in April. “He just kind of cheered everybody up.”

PHOTOS SPECIAL TO THE SENTINEL

Lyman Boyd, 4, holds Roubideau, a Corgi puppy that became part of his family in April. Lyman’s family, who lives in Delta, intended to get a puppy over the summer of 2020, but the pandemic moved up their plans and provided some joy while many things were unsettled because of COVID-19. “He’s just the happiest little dog. Very sweet, gets along with everybody,” says Julie Boyd. “He just kind of cheered everybody up.”

Maggie May is the mini-Aussiedoodle that stole Carol Burshek’s heart. Burshek and her husband, Jerry, are both cat people and have two cats, but the pandemic brought a puppy into their lives.

Simone was adopted by Cheryl Munkres from Roice-Hurst Humane Society in April. “I needed something to love and care for,” Munkres said.

Perhaps it was the perk-you-up wiggly tail. Or it was the comforting rub around the ankles.

Or it was those funny chirps that say, “I’m starving!” that only a leopard gecko can produce.

Lonely times can come around every year, but COVID-19 made them worse in 2020, and quite a number of people turned to pets to help them make it through.

Kids pulled dogs, cats and even fish into camera view to meet their online classes. Adults wanted something to pet while reading or watching news reports.

Pets were a distraction, exercise partners, cuddlers, playmates and breathing bodies of living joy that could care less about COVID-19.

A Bank of America poll released in September called it a “pet boom.” Of the 1,000 consumers it polled, 69% had at least one animal and 37% adopted a pet in the six months prior to September.

Net sales for the online pet retailer Chewy grew 46% and then 47% year-over-year in the first two quarters of 2020, in part because online spending went up, according to its shareholder letters.

However, it’s likely quite new pet ownership had something to do with it, too.

J&M Aquatics in Grand Junction has been “crazy busy” since March when it was deemed an essential business, said Linda Morrison, head manager for the store.

They don’t sell dogs and sometimes have a few cats available from area adoption centers, so customers came in seeking reptiles, she said.

The big requests were for chameleons, leopard geckos — “they’re just so easy to keep here in the desert” — and bearded dragons, Morrison said.

For snakes, customers wanted ball pythons and red-tail boa. They don’t carry much in the way of boas, but everybody wanted one this year, she said.

Shortly after the Colorado stay-at-home order came, so did the customers, to the point that the store sold out of certain animals and then had a hard time getting them back in stock, she said.

It was crazy then, “but it is still busy, even now,” Morrison said.

And if they did offer dogs, she has no doubt they would have been huge as well.

For Cheryl Munkres, a dog was the pet she needed in 2020.

“I am a single lady and was feeling lonely. I needed something to love and care for,” Munkres wrote in an email.

Simone came into her life on April 1 when Munkres adopted her from Roice-Hurst Humane Society.

“Simone was found wandering the streets of Phoenix and brought here with some other dogs. Luckily for both of us, we found each other,” Munkres wrote. “When I got her, she did not know how to play. Now she wants to play all the time.”

Julie and Todd Boyd also found they needed something positive in their lives when the shutdown happened.

It seemed like everything was being canceled, their 4-year-old son, Lyman, couldn’t go to preschool “and we weren’t even sure it was safe to go to the playground,” Julie Boyd said.

In the meantime, the Delta family missed the two older Corgis they had to say good-bye to in January.

They wanted another Corgi, a breed that is good with kids and “can’t jump out of the yard,” Julie Boyd said. They planned to get a puppy during the summer, but finding themselves stuck at home, they decided to move up the timeline.

Julie Boyd looked for a local Corgi breeder, but no one had puppies available. She finally found a breeder in Wichita Falls, Texas, with one cute pup. “He was the leftover puppy that no one had taken,” she said.

The Boyds just happened to have family traveling through Texas who were able to pick up the puppy and bring him home. They named him Roubideau after Roubideau Canyon, one of their favorite spots.

“He’s just the happiest little dog. Very sweet, gets along with everybody,” Julie Boyd said. “He just kind of cheered everybody up.”

“He still chews up anything he can get, a shoe, a bike seat or a strand of Christmas lights, but really he’s a very good boy and keeps us smiling,” she said.

While some found a new pet to be what they needed during the spring, for others it took a while longer.

For Carol and Jerry Burshek, a new pet was the thing they didn’t know they needed until 2020.

“Both of us are cat people,” Carol Burshek said.

They had a Siamese cat and a Persian cat and were quite satisfied.

Being in their 80s, they were not interested in dogs, much less puppies. Then the pandemic hit, and life became extremely boring, Carol Burshek said.

She also was in a lot of pain because she needed back surgery and elective surgeries were not happening.

“So I had a lot of time to get on my cellphone and Google,” she said. “I had hours and hours to pass.”

Since their kids kept pestering them to get a dog, she

Googled dog breeds and her heart became set on a mini-Aussiedoodle.

“They’re so smart they can do your taxes,” she said.

After her surgery and recuperation, she found a breeder and Maggie May came home in September.

Carol Burshek named her after the Rod Stewart song. “You stole my heart, you stole my soul,” she said, repeating the lyrics. “We’re so glad we got a dog, now. She’s so smart she nearly trained herself.”

“We have had some people look at us sort of cross-eyed like, ‘Do you know they live 12 years?’ ” she said.

They do, and their daughter said she would be honored to take Maggie May should anything happen to her parents.

“That clinched it,” Carol Burshek said.

While the Persian isn’t so happy at having a puppy in the house, the Siamese will play and cuddle up with Maggie May.

When a call went out for foster homes in the spring, “we had over 100 foster applications,” she said.

Before the pandemic, they might have received a handful of those applications during an average week and they had to work a lot harder to find foster homes for kittens in particular, she said.

Roice-Hurst currently has 92 foster homes in its network and relies on them heavily especially since it had to change its model of caring for its animals in 2020.

Instead of being shelter-based operation, Roice-Hurst is now foster-home based, she said.

Not knowing how the pandemic would impact staff, they didn’t want a shelter full of pets with no one to care for them.

In addition, they weren’t sure how much room would be needed for pets from the community whose owners were economically impacted by the pandemic and were no longer able to care for them, Stout said.

This latter item is still of some concern heading into 2021 with the pandemic ongoing, she said.

Being able to utilize foster homes has increased Roice-Hurst capacity and has been better for the animals, Stout said.

“It’s better for the pets to be in foster homes instead of a shelter, no matter how great your shelter is,” she said.

It also allows them to get to know a pet better and “better match them to a potential owner, because we can vouch for the animal’s behavior in a home,” she said.

As for adoptions this year, they were very near 2019 levels for Roice-Hurst despite animals not being able to travel to shelters across state lines, she said.

A lot of people in the industry were concerned that many of the pets adopted earlier this year were going to come back to shelters, she said.

“We’re not seeing that, and we’re not anticipating that,” Stout said.

The “pet boom” of 2020 wasn’t so kind to some cats, according to Cat League & Assistance of the Western Slope, CLAWS.

“We have seen a lot of animals left behind, left in apartments and houses. People up and moving and leaving their pets as they drive away,” said Valerie Mazrin, president of the group.

It has been since May that they have seen the increase and at the same time, adoptions did not increase, she said.

“We’re seeing homes wanting kittens and some of our bigger cats, but not nearly to the capacity that we usually see,” Mazrin said.

She also has concerns about the upcoming “kitten season” in spring of 2021 and what may result from the halt on spay and neuter procedures that occurred in part of 2020 because of the pandemic.

It has been a sad year for cats, she said.

“They are kind of secondary to the dog and they need homes just as bad, if not more,” Mazrin said.

This is the last in a series of stories about some of the trends that marked this year because of COVID-19.

Over the past several weeks, we have considered the rush for toilet paper and the shortage of appliances.

We looked how some of us planted gardens for the first time or expanded those we already planned. And bikes were a huge hit, not just in the Grand Valley, but around the world.

Thank you to those of you who shared your stories with us related to those trends.

To read the stories in this series, go to GJSentinel.com.

Myleene Klass: I suffered a miscarriage on my radio show

'A force to be reckoned with': Heartbroken Caprice loses her beloved grandma to Covid-19

WrestleMania 37 to take place in Tampa Bay in April