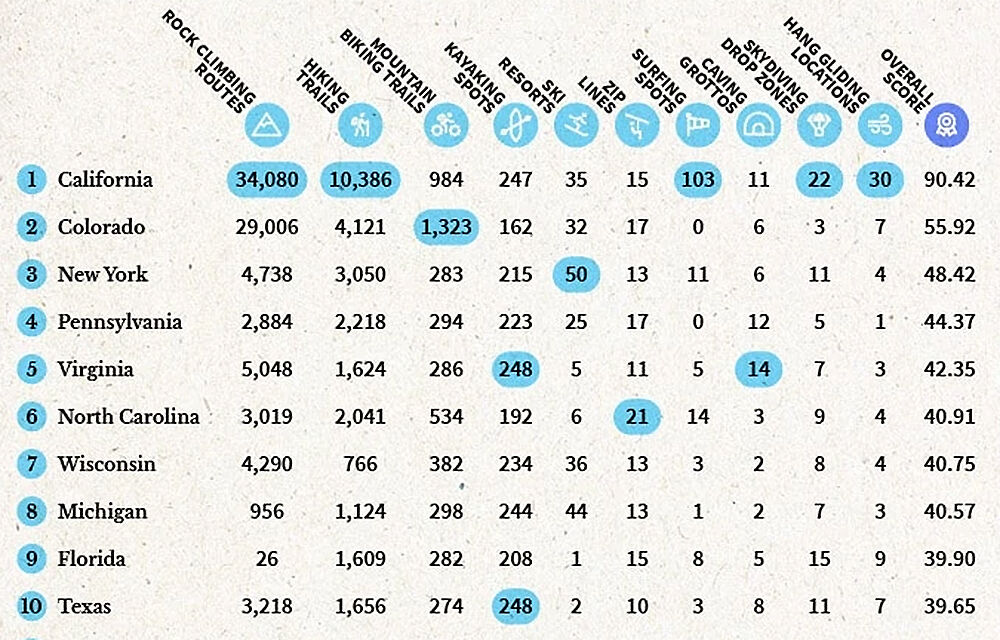 These are the top 10 states in Outforia’s 2021 Adventure Index. To see how all 50 states ranked, go to Outforia.com/2021-adventure-index/. 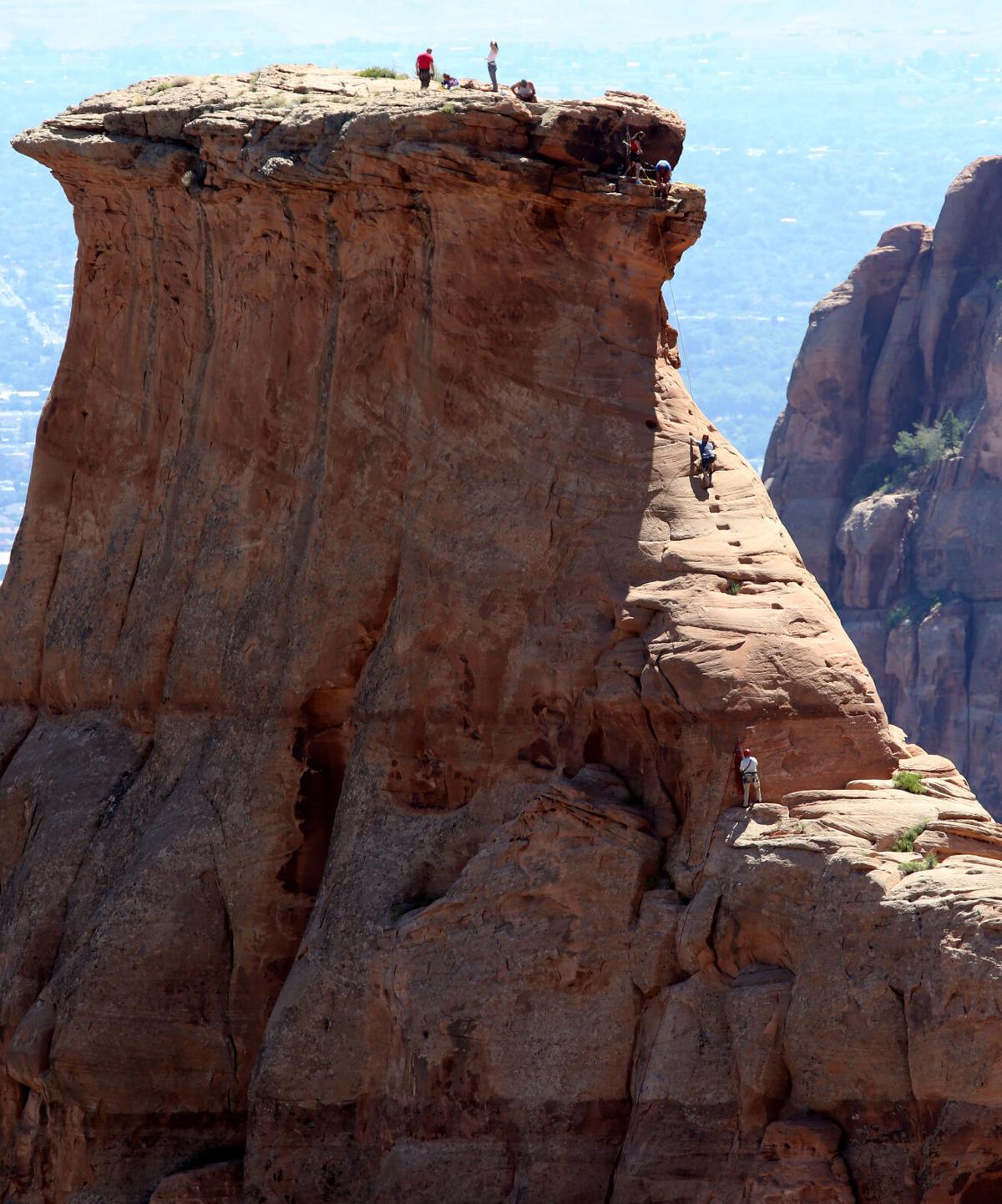 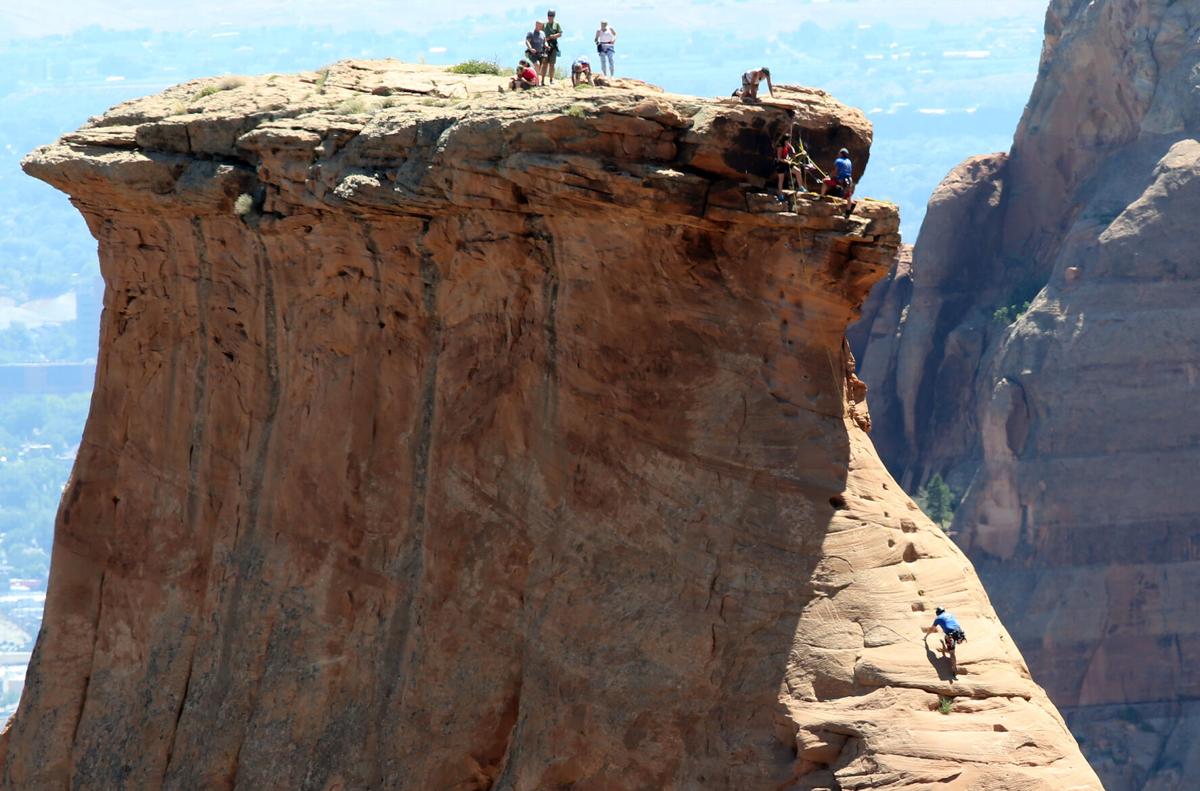 Climbers are shown on top of the 450-foot-high Independence Monument in Colorado National Monument. 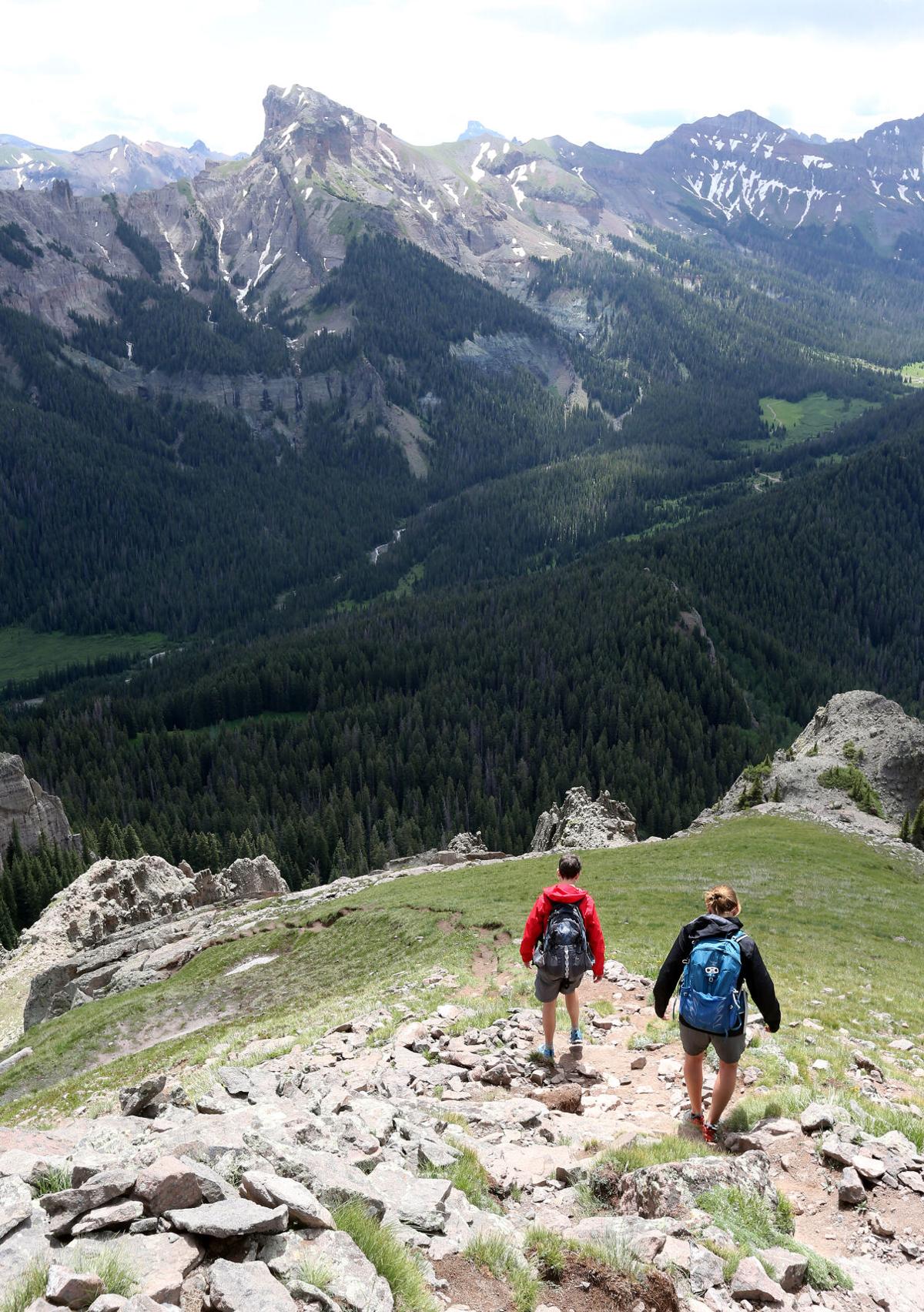 Hikers descend from the top of Courthouse Mountain, which stands 12,152 feet high in the Uncompahgre National Forest northeast of Ouray. 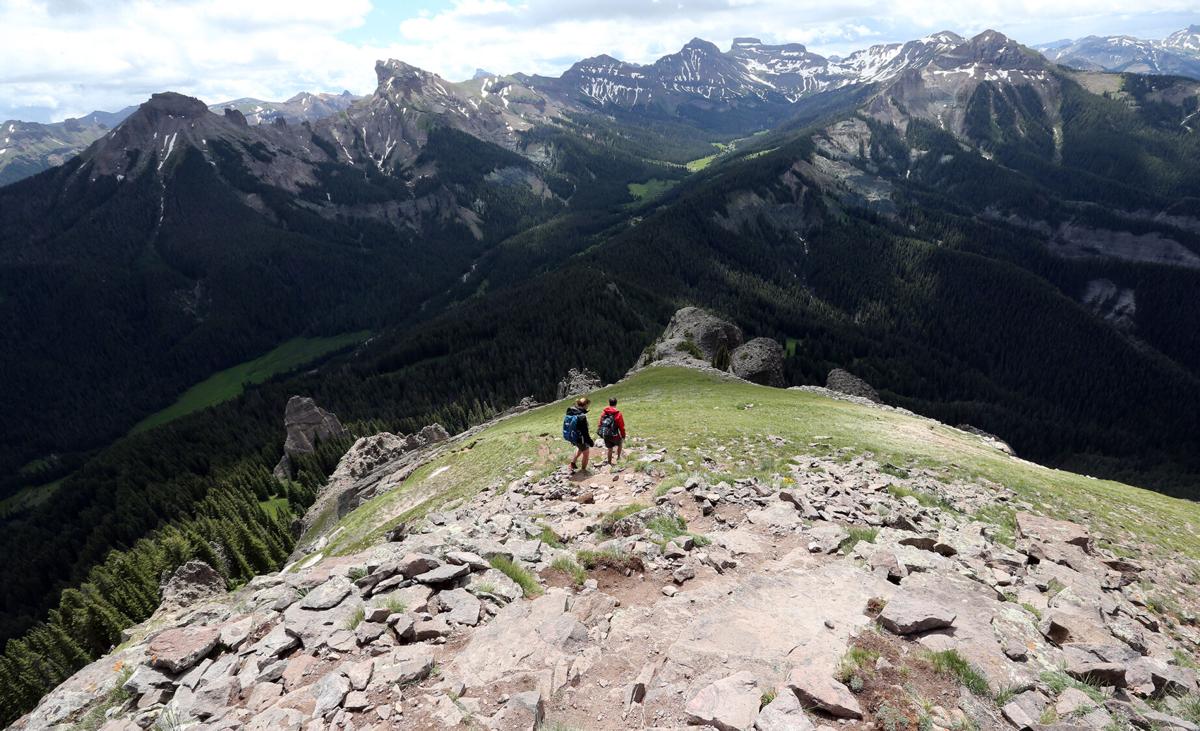 Hikers come down from the top of Courthouse Mountain, 12,152 feet high in the Uncompahgre National Forest north east of Ouray. 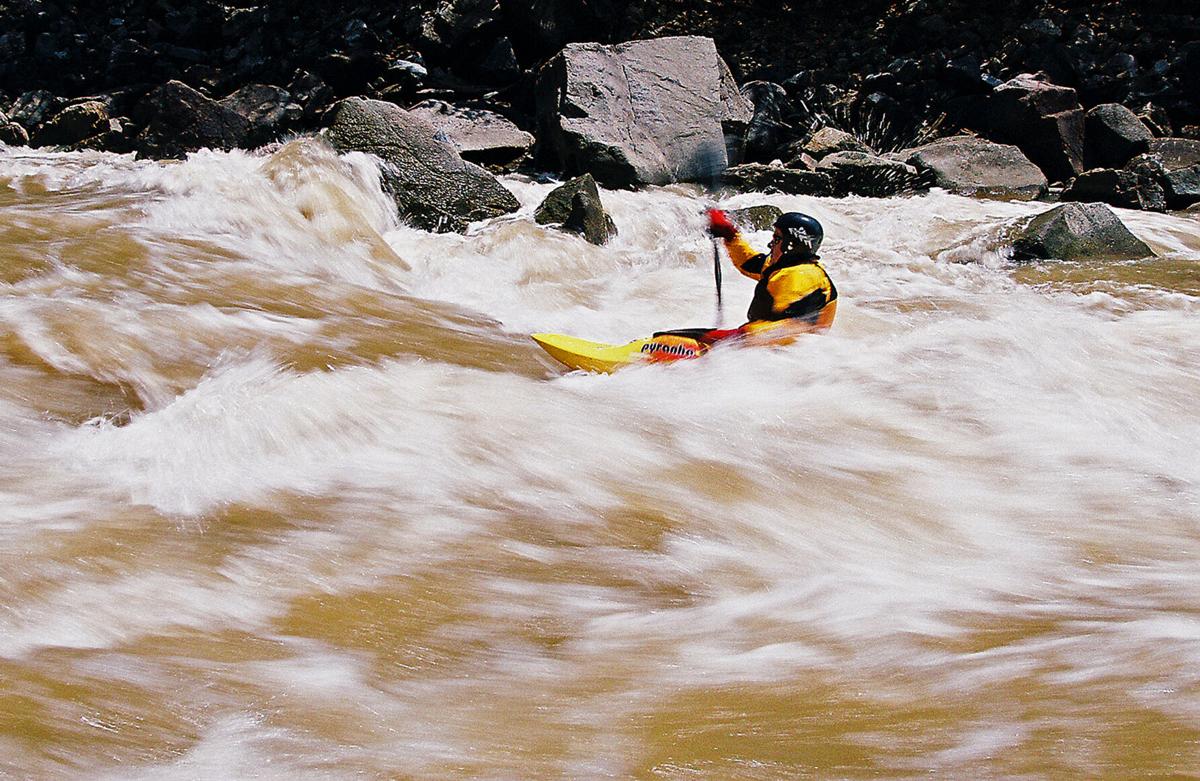 A kayaker navigates the Colorado River in Glenwood Canyon. 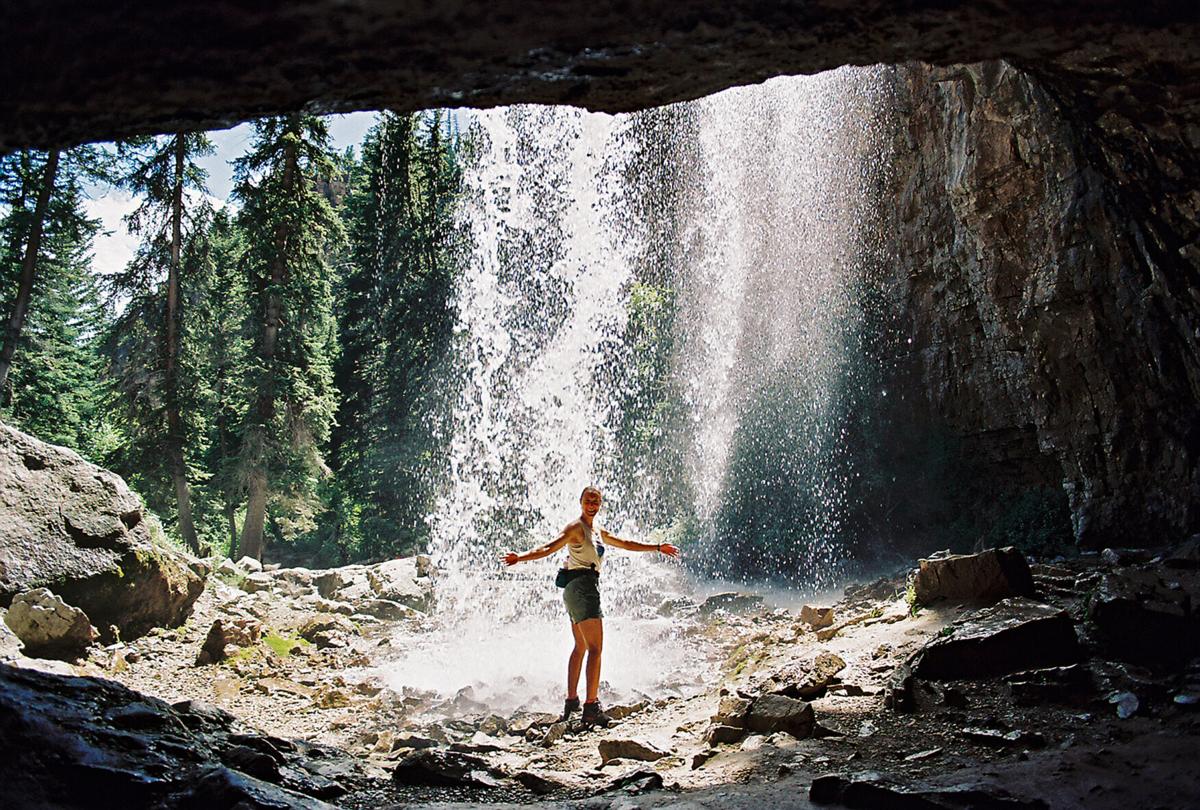 A hiker at the waterfall above Hanging Lake in Glenwood Canyon

These are the top 10 states in Outforia’s 2021 Adventure Index. To see how all 50 states ranked, go to Outforia.com/2021-adventure-index/.

Climbers are shown on top of the 450-foot-high Independence Monument in Colorado National Monument.

Hikers descend from the top of Courthouse Mountain, which stands 12,152 feet high in the Uncompahgre National Forest northeast of Ouray.

Hikers come down from the top of Courthouse Mountain, 12,152 feet high in the Uncompahgre National Forest north east of Ouray.

A kayaker navigates the Colorado River in Glenwood Canyon.

A hiker at the waterfall above Hanging Lake in Glenwood Canyon

And all the activities we can do it in that Colorado outdoors also are awesome.

A reminder of this recently came in the form of the 2021 Adventure Index released by Outforia.com, a site that connects outdoor enthusiasts with resources related to the outdoors, adventure and survival.

Colorado’s overall score put it in second place, sandwiched between California, which took first, and New York, which came in third.

So right there you might have wanted to dismiss the 2021 Adventure Index because, of course, we know this neck of the country is the best. But hang on.

The study still has some interesting data and could shed light on where other amazing, out-of-state places could be (before you come back to this more-amazing place, of course).

Colorado was given the top spot for the most mountain biking trails available: 1,323 trails based on the count at singletracks.com/mountain-biking-trails. It’s a number you may or may not agree with, depending on the number of trails you find at your favorite mountain biking website.

Colorado also had good numbers in the study in the categories of rock-climbing routes (29,006 according to mountainproject.com/route-guide), and hiking trails (4,121 according to alltrails.com).

However, neither Colorado nor California nor even Utah were close to taking the top spot in the ski resort category. That went to New York, which has 50 ski resorts.

That’s just the number of resorts, not a measurement of vertical or technical terrain or even the size of those resorts. But … Lake Placid, New York, has hosted the Winter Olympics twice (1932 and 1980), so there’s that.

Colorado also received a zero in the category of surfing spots. Being landlocked admittedly presents a sizable issue to overcome in this regard.

However, Colorado has much to offer in the way of stand-up paddleboarding, or SUP, and that was not part of the study.

In fact, there was plenty that wasn’t part of the study: camping, backcountry skiing and Nordic skiing, fly fishing, ice fishing, hunting, snowmobiling and OHV trails, windsurfing, snowkiting, paragliding, wilderness areas and the list could go on and on.

Perhaps the point isn’t what the adventure entails, but simply to have an adventure.

To that end we say, “get out there! Colorado’s outdoors is awesome!”

But only 30 minutes south of downtown is 15 miles of granite in Unaweep Canyon, which can be accessed from Colorado Highway 141.

That is where David Deming and GradyLee Palmer with Summit Canyon Mountaineering, 461 Main St., would likely be if they didn’t have time to get to the other two areas.

There are plenty of routes, crack climbing and bouldering, and something for beginners as well as pros.

If you get there at the right time, you might even be able to do some ice climbing on one side of the canyon in the morning, and then rock climb elsewhere in the canyon in the afternoon in short and T-shirt, they said.

For information about Unaweep Canyon, Deming and Palmer recommended going to mountainproject.com. Of course, they won’t mind if you stop in at Summit Canyon to talk with them.

Grand Valley Climbing, 611 25 Road, is another local resource for those wanting to learn more about climbing.

ON THE TRAIL OR SLOPE

If they had to pick a favorite mountain biking trail — it’s admittedly difficult given the number local options — both Henry Mollack and Lucy Foley with The Board & Buckle, 2822 North Ave., have a soft spot for Steve’s Loop.

It’s part of the Kokopelli Trail System south of Loma, and much of it is “smooth flat and rolling,” Mollack said.

It has terrific views and isn’t too technical, although there is a long climb out, “but I don’t mind climbing,” Mollack said.

Foley agreed, then added Holy Cross at the Lunch Loops as a favorite. She likes the technical challenge the trail gives her, and “I feel like it’s a very rewarding trail in general,” she said.

For downhill, Foley heads to Powderhorn Mountain Resort for its summer mountain biking options. “I like going fast,” she admitted.

Back up at Powderhorn in the winter, Mollack’s recommendation for a fast groomed run is Maverick top to bottom. Foley went with Racer’s Edge, which is steeper and offers more speed.

For finding powder, Mollack likes to dip into Sven’s Bend. He likes the lines and the tree spacing.

Sven’s Bend also is a favorite for Foley. “There’s more untouched snow up there, and you can make a lot of new lines,” she said.

For information about local mountain bike trails, check out copmoba.corg. Powderhorn information can be found at powderhorn.com.