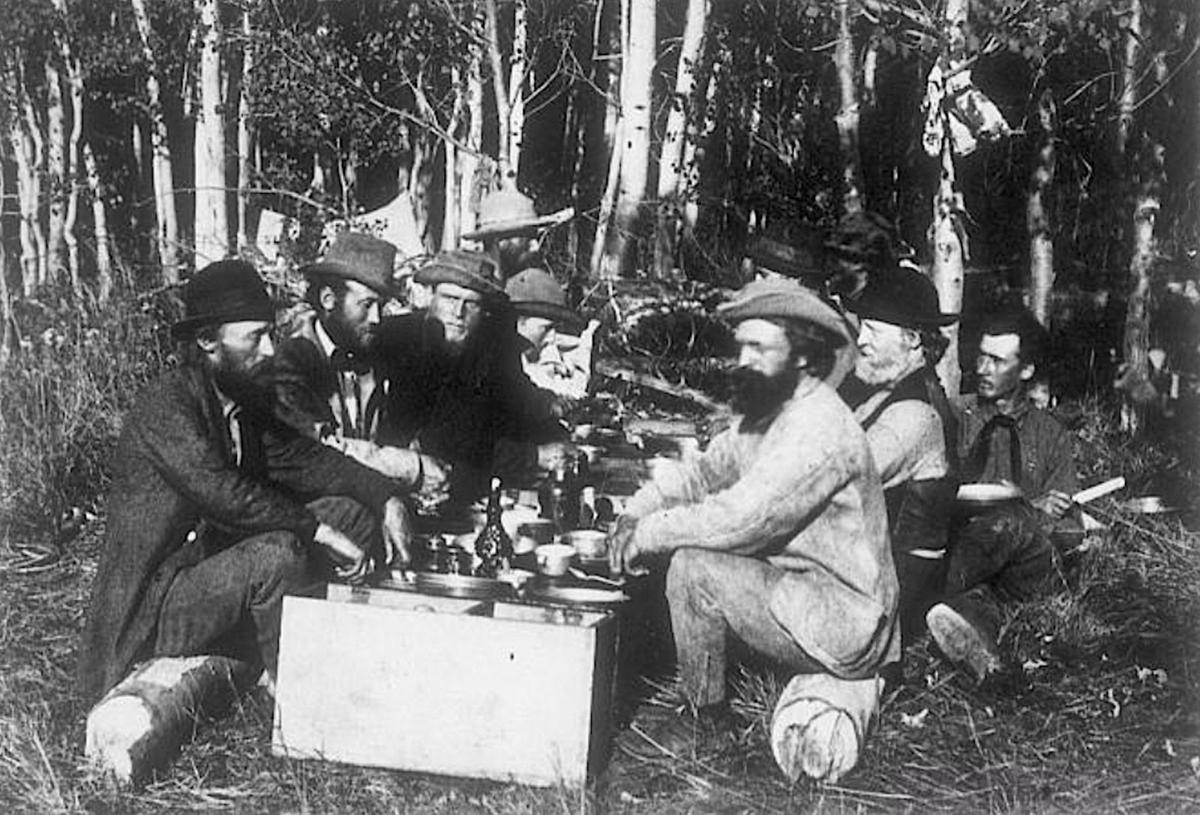 SMITHSONIAN INSTITUTE Members of the Hayden Survey in Eagle County in 1873. Ferdinand Hayden is seated, front left. James T. Gardner, who led the team involved in the 1875 battle with Indians, is seated front right (with dark beard). 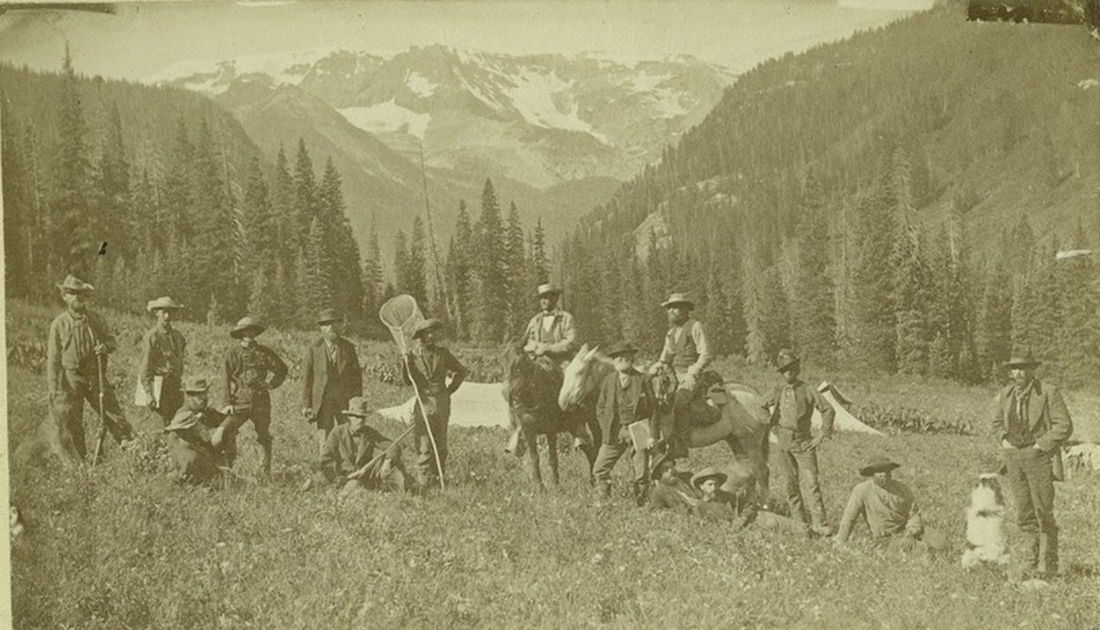 Some members of the Hayden Survey in Colorado in 1874. Man lying down with light-colored hat is believed to be geologist Albert C. Peale. Standing next to him may be the cook, Judge Porter. Both were in the 1875 expedition that was attacked by Indians.

SMITHSONIAN INSTITUTE Members of the Hayden Survey in Eagle County in 1873. Ferdinand Hayden is seated, front left. James T. Gardner, who led the team involved in the 1875 battle with Indians, is seated front right (with dark beard).

Some members of the Hayden Survey in Colorado in 1874. Man lying down with light-colored hat is believed to be geologist Albert C. Peale. Standing next to him may be the cook, Judge Porter. Both were in the 1875 expedition that was attacked by Indians.

Author's Note: This is the second of two columns about the Hayden Survey. For the first, click here.

When James T. Gardner of the Hayden Survey met with Chief Ouray on July 11, 1875, prior to taking his team into the field that year, he received a prophetic warning from the Ute leader:

"I spoke of going to the Sierra La Sal," Gardner wrote later that year. "He said that was not good; that the Indians there were robbers; … that they were in the habit of killing one or two men found alone and stealing a few head of stock."

But Ouray also said that a group of armed men should be safe from the renegades, who may have been a combination of Ute and Paiute.

Many Utes, including Ouray, feared the Hayden Survey's work would be a prelude to white settlement. But the renegades along the Colorado-Utah border were the only ones to physically attack members of the Hayden Survey. They fought a 24-hour running gun battle with Gardner's team.

Gardner led the Primary Triangulation Division of the survey headed by Ferdinad V. Hayden. He planned to establish a point on the highest peak in the La Sals that would allow mapping west to the Colorado River in Utah.

But he was concerned enough about Ouray's warning that he decided to join his division with the Grand River Mapping Division led by Henry Gannett. They met at Gannett's supply camp on the Dolores River near present-day Gateway.

Riding and leading mules, the team arrived at the southern end of the La Sals on  Aug. 11. They spotted nine Indian lodges about six miles east of them.

Two rainy days kept them mostly in camp, but on the morning of Aug. 15, the party headed south toward Abajo Mountains, west of present-day Monticello, Utah.

Late that afternoon, nine Indians rode up, "making signs of friendship and shaking hands," Gardner said. They wanted to trade for tobacco and gunpowder, but the survey party had limited supplies and declined to trade.

"We bid them 'adios' and started forward over the hill," Gardner recalled. "No sooner had the rear guard passed the brow than the Indians commenced firing from behind it."

The mule train moved forward as quickly as possible to get out of range. The men spent the afternoon trying to avoid Indian fire and looking for a safe route southward.

The survey party camped on a sagebrush plain well removed from the cliffs that night. Men with rifles sneaked through the brush around the camp to shoot at any Indians who came close.

"For five hours we fought them in their own fashion, creeping through the sagebrush and firing at the flash of their guns," Gardner reported.

Around midnight, the Indians retreated. But the following day proved to be even more dangerous.

The original attack probably occurred near Church Mountain, which lies next to U.S. Highway 191 between Moab and Monticello.

Early on Aug. 16, the surveyors reached what's now called Peters Wash, trying to find a route to the top of the plateau where Monticello sits.

"We had reached the edge of the great plateau," with surrounding cliffs 1,000 feet high, Gardner said.

A trail to the southwest led up the canyon and much-needed water at Peters Springs. But the Indians on their swift ponies were always one step ahead. They had the survey team in "a well laid trap," Gardner said.

If the team remained in the dry valley another day, "we would become frantic with thirst and rush to certain death up the cañon," he said. The only hope was to reach the top "where we could fight them on more equal terms and move forward, hoping to find water."

The team spent five hours marching up and down the valley in a "fruitless search" to find a safe route up the canyon.

Late in the morning, Gardner discovered a deer trail that snaked through pinyon trees to the top, on the opposite side of the canyon from the Peter's Spring trail. But it was so narrow and steep that the mules carrying packs couldn't ascend it.

Sheltered by rocks and trees, they unpacked the mules, keeping only enough food and coffee for three days, as the renegades fired at them from a distance.

Then, exhausted but determined, they climbed to the top, expecting to be fired upon. But the Indian guns remained silent.

They reached the top about 1 p.m., then "pushed our jaded mules to their fastest trot," headed toward Mancos Creek. They were well ahead of the Indians who had to cross the canyon.

At sunset, "we fortunately discovered a small spring, and the lives of the men and animals were saved," Gardner said.

They rode southeast to the Hovenweep ruins on the Colorado-Utah border. On Aug. 19, they reached Parrot City, a small mining camp near present-day Hesperus. They traveled more than 200 miles in five days and survived a lengthy gun battle.

"Out of thirty-two animals, we brought off 28 … Not a man was wounded and none are sick," Gardner reported.

Reporter Cuthbert Mills said, "we had quenched a constantly burning thirst in little stagnant pools of alkaline mud and ate little beyond dough cakes cooked in a frying pan."

News of the attack spread after Gardner sent a letter to Hayden in Denver, and it was published in the Rocky Mountain News on Sept. 5, 1875, followed by another letter Sept. 25.

The Colorado Springs Gazette reported on Oct. 2 that President Ulysses S. Grant expected Chief Ouray "to secure the capture and punishment of the bad Indians, and recover the valuable surveying instruments which Hayden lost."

However, none of the attackers was captured or punished, or even definitely identified. And the lost equipment wasn't found until almost a century later.

In the 1950s, a uranium prospector stumbled upon one piece of equipment from the Hayden team. In 1964, remnants of many discarded items were discovered on a deer trail and donated to the American Heritage Center at the University of Wyoming, which also held survey documents.

Henry Gannett and geologist Albert C. Peale returned in 1876 to complete survey work. This time, they were accompanied by four Ute guides provided by Chief Ouray, and there were no confrontations.

That was the last of the Hayden Survey's work in western Colorado. But, during three seasons of work — and one harrowing Indian attack — the survey provided detailed information on the geology and topography of the region.

In doing so, it encouraged the influx of miners and settlers that the Utes had feared.