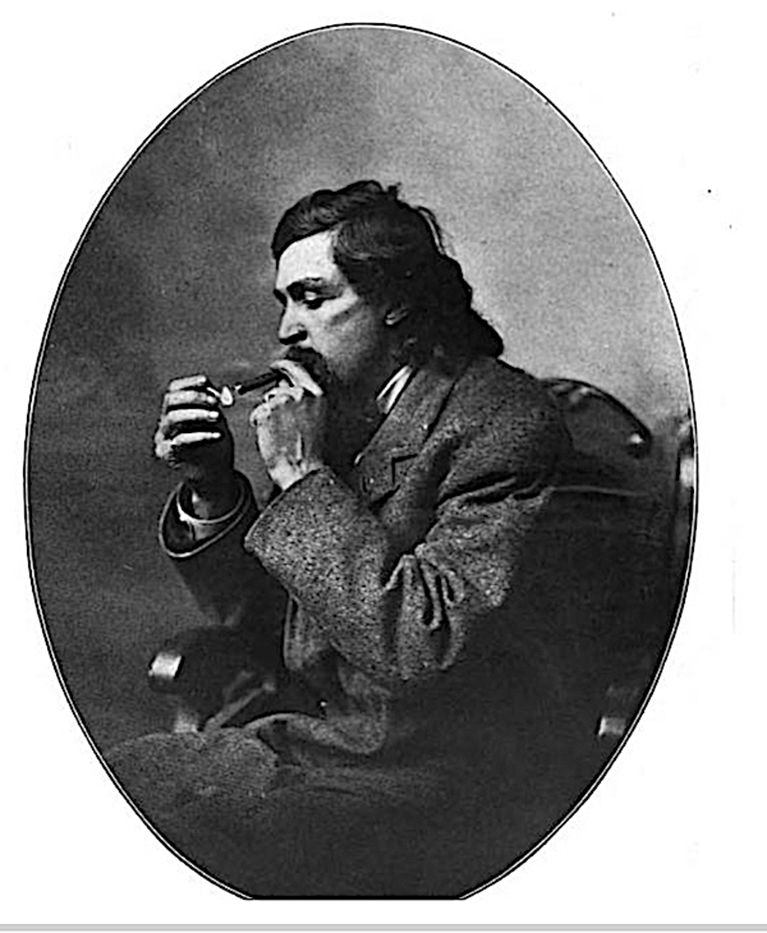 Dr. Edward F. Eldridge, from his book, "The Sinbad Mines." 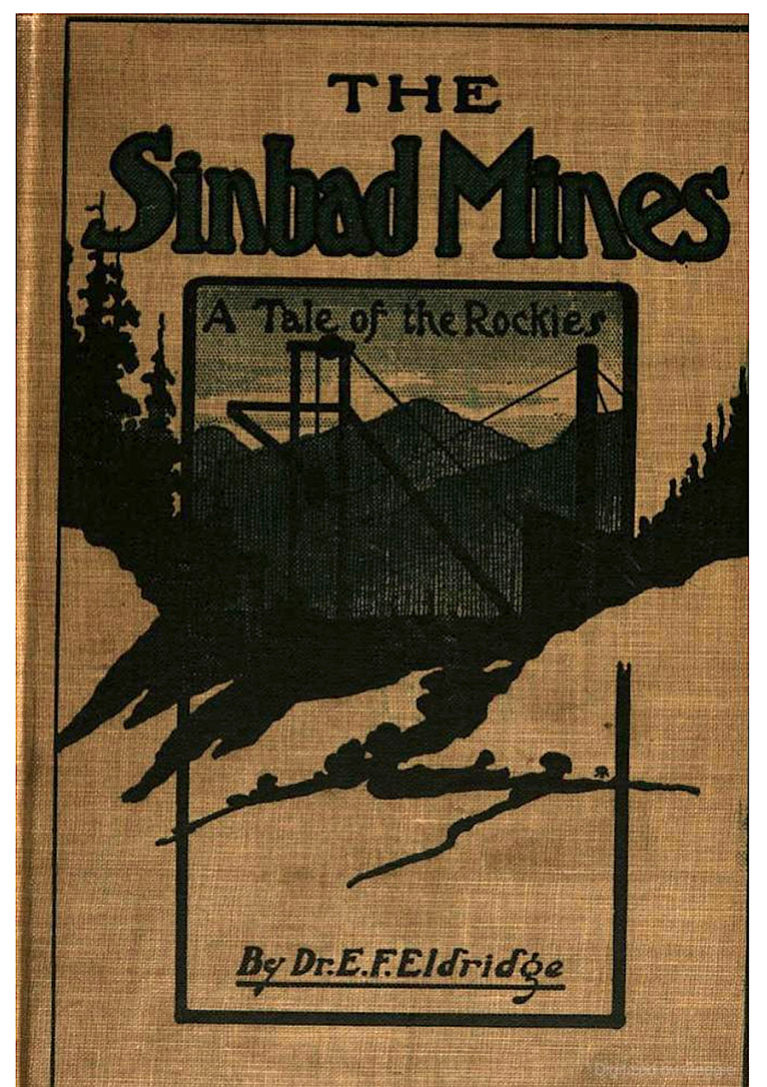 Dr. Edward F. Eldridge, from his book, "The Sinbad Mines."

I sing of a land by the river Grand,

Where the soil is ﬁlled with wealth,

Where the balmy air and sunlight fair

Restore the sick to health;

In late summer of 1881, two prospectors from California headed east across Nevada and Utah, then over the LaSal Mountains to arrive in the Sinbad Valley, near the Colorado-Utah border.

There, Robert and Happy (surnames unknown) found an old dugout cabin, apparently abandoned decades earlier, and the entrance to an old mine shaft. Poking around in the old mine, they found ore rich in lead, copper and gold.

Robert traveled to the new town of Grand Junction, enlisted an investor and partner, who recruited more investors, workers and equipment. Within a year — by the time the Denver & Rio Grande Railroad reached Grand Junction — the Sinbad Mining and Milling Co. had established a profitable working mine, a smelter and a healthy little mining community in Sinbad Valley.

Except it didn't really happen. It was all from the pen of Dr. Edward F. Eldridge, a Grand Junction physician, author, poet and, reportedly, a friend of Thomas Edison.

It was in a Daily Sentinel story about Edison that I first learned of his connection to Dr. Eldridge. The story was written by the late Sentinel columnist Merle McClintock in 1939, but it referred back to a Sentinel article from 1897.

That article described the arrival of the first movie projector in Grand Junction, "an 1897 model Edison Triograph," which apparently provided a brief demonstration of motion pictures at the Park Opera House.

Thomas Edison's work "was not unfamiliar" to 1890s Grand Junction because "a pioneer physician, Dr. Edward F. Eldredge (sic) was a friend of Edison and had been in his laboratory to watch demonstrations of the series of inventions that added so much to the United States and the World," McClintock wrote.

I couldn't find any other references to Eldridge's friendship with Edison, in the Sentinel or on the internet. However, it is clear that Eldridge was eager to embrace the technology Edison developed.

In 1901, the Sentinel reported that "Dr. E.F. Eldredge (sic) has erected a large new lamppost and placed thereon a handsome street lantern, wherein he proposes to place a large candle power electric light and allow the same to burn all night."

The new lamp would, the Sentinel said, "afford a brilliant light to those seeking the doctor's office" at 538 Chipeta Ave.

In another article that year, the Sentinel said Eldridge worked to provide relief to a Plateau Valley rancher dying of cancer.

In 1910, he was described in another newspaper as a "physician and surgeon, mine owner, poet, publicist, optimist, public-spirited citizen and never faltering booster for his home town, home institution and his home country." He was, the article said, "someone who helped the community doff its swaddling clothes and don its metropolitan garb."

Eldridge was born in Ketchumville, New York, about 1855. He graduated from Dartmouth Medical College in 1881 and began his medical practice in Needham, Massachusetts. Two years later, he moved to New London, Wisconsin, where he was a leader in the Wisconsin State Medical Society and a delegate to the International Medical Congress in Germany.

Additionally, he served as mayor of the town of New London.

He moved to Grand Junction in 1890, apparently hoping the dry climate would alleviate his own health issues. He soon became enamored of the community and its climate. He published a paper nationally titled "Grand Junction, Colorado, as a Health Resort."

Eldridge also wrote poetry extolling the virtues of the area, such as the poem at the beginning of this article, which also opens his novel, "The Sinbad Mines."

Another part of the same poem reads:

For life is bliss in a clime like this,

Where all His gifts are free;

As a novelist, it's not clear how successful Eldridge was, although one can still obtain used copies of his 1905 novel "The Sinbad Mines: A Tale of the Rockies."

His first novel, "A California Girl," published in 1901, is more difficult to find.

Eldridge also published several volumes of poetry, including "Alkazar the Moorish Alchemist and Other Poems," in 1898.

Poetry is abundant in "The Sinbad Mines." Every few pages, Eldridge added one of his poems to complement the narrative, such as when the protagonist is bringing his new bride from the East to the Grand Valley, and he points out Grand Mesa as the train rolls toward Grand Junction. That scene is followed by "Ode to Grand Mesa," which begins:

Thou monarch of all the fair mountains

Which smile on the vale of the Grand,

Thy feet in its pure limpid waters,

Thy shadows o'erspread the land.

A store-house of wealth for all ages,

Reserved by a great nation's pride,

To remain in the grandeur of nature,

As fair as a young, blushing bride.

"The Sinbad Mines" is also a morality tale, meant to be an example to young readers. In fact, Eldridge dedicated the book "To the Young People of Our Country, Who Are Endeavoring to Succeed in a Worthy Life."

In the book, Robert leaves his home in upstate New York as a teenager — much as Eldridge himself did. Robert is penniless but determined. He finds work with a family traveling west to Chicago, and it is their daughter he eventually marries.

Through relentless hard work and clean living, he becomes not only a successful mine owner, but a pillar of the Grand Junction community.

"He has arisen from the most helpless and dependent position to one of honor and respect; from abject poverty to abundant wealth, and from an uneducated waif to an esteemed citizen of one of the most enlightened, accomplished and reﬁned cities of the Great West," Eldridge wrote.

He also told of a railroad being built, apparently through Unaweep Canyon, to reach Robert's Sinbad Mines and haul out the great wealth they produced.

That, of course, never occurred. No great mines were developed in Sinbad Valley. Near the end of the 19th century, the valley — which is roughly halfway between Gateway and Paradox Valley, and lies on the western edge of Sew'em Up Mesa — was known as a haven for cattle rustlers and other outlaws.

There were, however, a number of copper and gold claims located in the valley, some of which were worked unsuccessfully into the first decade of the 20th century. The Captain Jack Lode was located by none other than E.F. Eldridge.

Eldridge continued to live and practice medicine in Grand Junction until 1914, when he moved to San Diego, hoping to restore his failing health. He died there in 1915, but his daughter had his body returned to Grand Junction. He is buried in Orchard Mesa Cemetery.

Sources: "The Sinbad Mines, A Tale of the Rockies" by E.F. Eldridge M.D.; "125 People – 125 Years: Grand Junction's Story," by Laurena Mayne Davis; "Eldridge, Edward Fayette," in "Physicians and Surgeons of America, 1893"; The Daily Sentinel archives; "Gateway/Unaweep Canyon at some point in time," edited by Jean Moores.

All contents copyright © 2019 The Daily Sentinel. All republication rights are reserved. Material in this publication may not be published, broadcast, rewritten for broadcast or publication or redistributed directly or indirectly in any medium.

For information, go to www.coloradolottery.com.

NEDERLAND — A Colorado ski resort has reopened a mountain section where chairlifts were closed due to electrical damage.

The ski area about 5 miles west of Nederland said it opened the lower mountain, but all upper mountain lifts remained closed Sunday.

Officials said the wind storm created a ground blizzard in the foothills with limited visibility from blowing snow that led to road closures and fallen trees.

The Sunday incident was the second highway backup caused by a tipped and leaking tanker in Utah.

Interstate 15 was closed in both directions for 10 hours in Lehigh on Saturday when a truck rolled and spilled butane, a flammable liquid.

The driver of the beer truck was not charged. South Davis Metro Fire says no injuries were reported.

Man dead after shooting in Loveland

LOVELAND — A man is dead after a shooting involving police in northeast Colorado.

The Loveland Police Department said police were notified at 11:40 p.m. Saturday of a single car rollover crash on Colorado Highway 402 in Loveland.

When an officer arrived at the scene, it was reported that a man in the vehicle was brandishing a pistol.

The Police Department said shots were fired and the man was struck and pronounced dead at the scene.

No other details were immediately made available.

The incident remains under investigation.

SALT LAKE CITY — A 26-year-old man is recovering after he was shot twice by his wife in Sandy.

Police say the shooting happened Saturday night after a fight between the man and his 25-year-old wife.

Sandy Police Lt. Dean Carriger said the man is in serious condition and is expected to survive.

Carriger says the woman was not arrested while police investigate whether the shooting was justified.

Authorities did not release the name of either spouse.