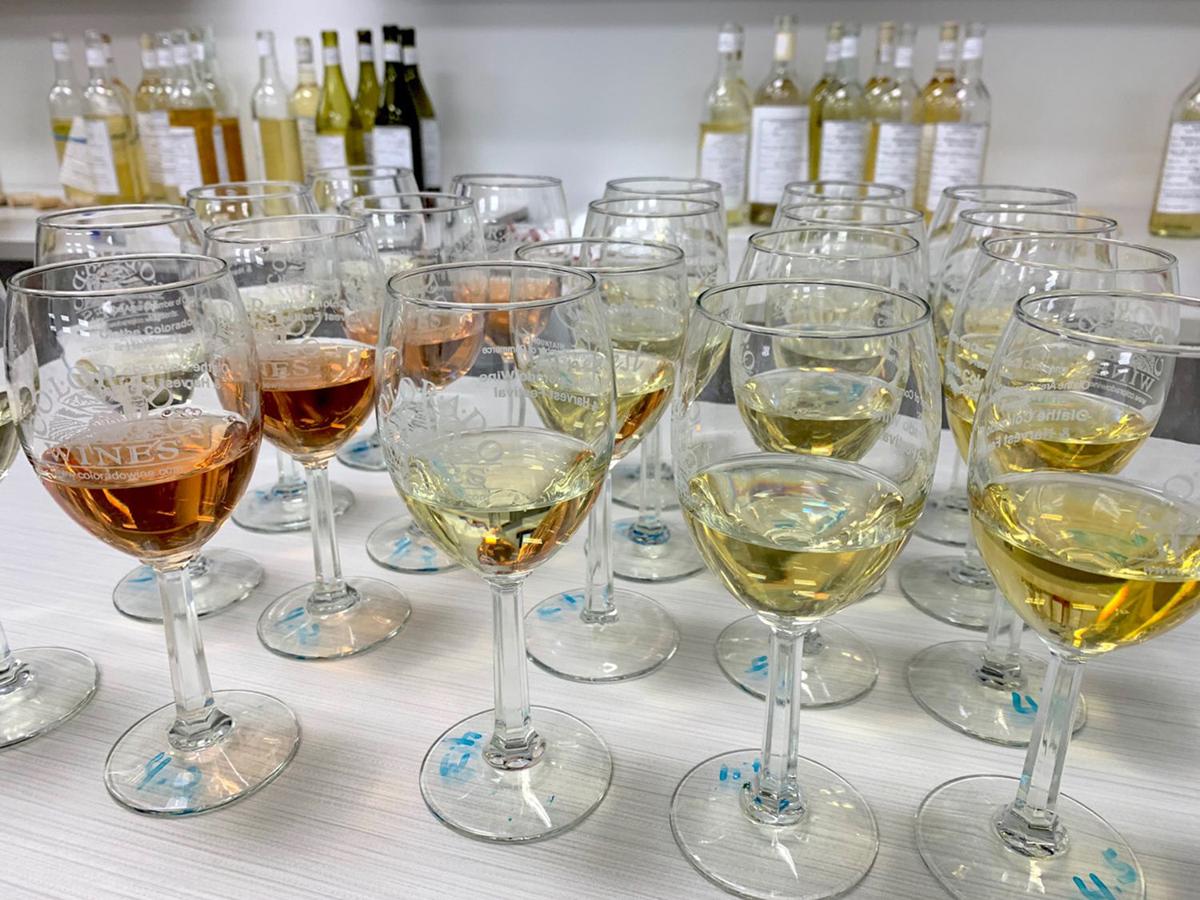 These are few of the white and rosé wines entered into the 2019 Amateur Winemakers Competition. A total of 112 wines were entered in the contest’s various categories including white, rosé, red, fruit and sparkling wines. The judges used the UC-Davis 10-category evaluation system. 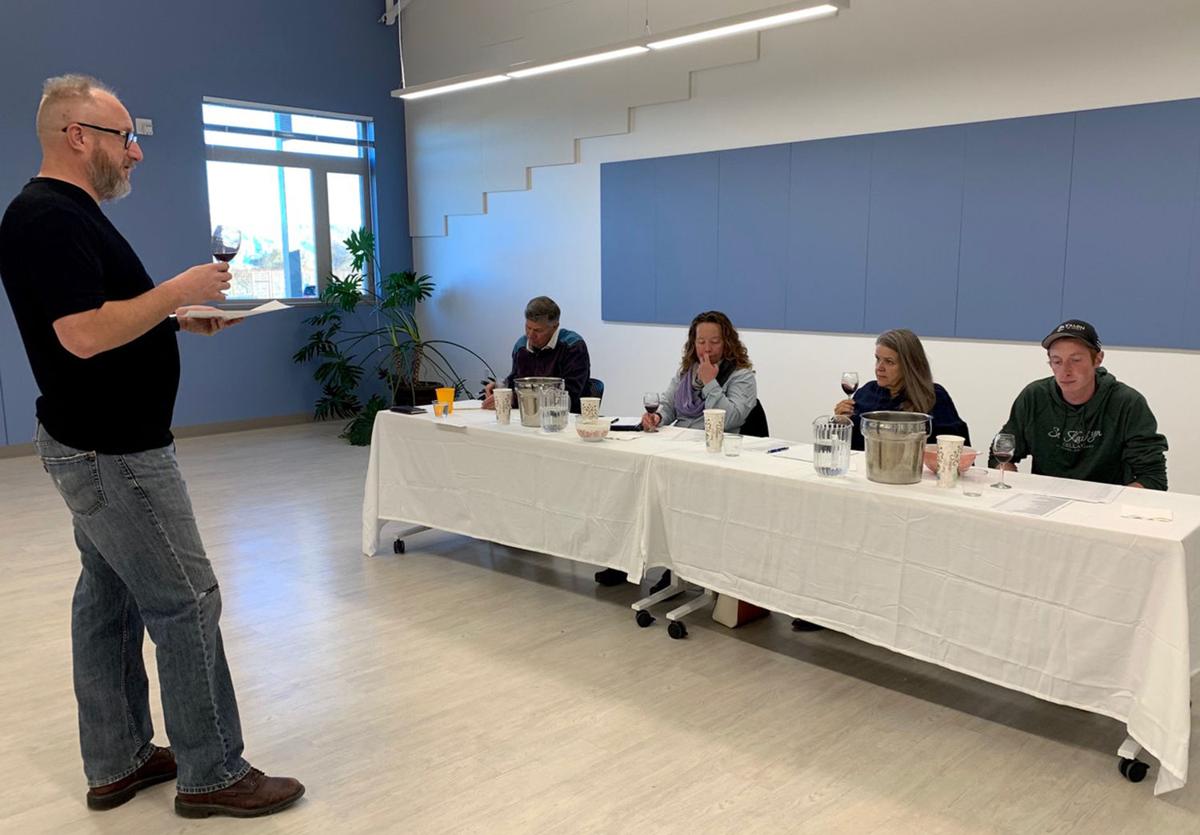 These are few of the white and rosé wines entered into the 2019 Amateur Winemakers Competition. A total of 112 wines were entered in the contest’s various categories including white, rosé, red, fruit and sparkling wines. The judges used the UC-Davis 10-category evaluation system.

Among the local wine events that add spice to this time of year is the annual Amateur Winemakers Competition sponsored by CAVE, the Colorado Association for Viticulture and Enology.

It's certainly a highlight for the winemakers, since for many of them this is their first attempt at having their wines evaluated by someone other than family, friends and others who get it for free.

It's also a highlight for the judges, most of whom have years of experience judging this and other competitions.

This one, however, is different from other contests because it reflects winemaking at its most basic, when a winemaker is taking those preliminary steps from cobbling together a basement wine to producing something that someday may appear on your local store shelves.

This year's competition featured 30 winemakers and a record 112 entries, the first time the contest has reached triple digits.

Entries came not only from Colorado but several other states (wines receive extra points if they are made from Colorado-grown fruit) and included many new winemakers in their first journey into the competitive process.

It's this newness that makes the amateur contest a joy to judge. Winemakers by nature can be an inquisitive lot and many in this contest still are exploring their own creativity, both in their choice of raw material (more on this later) and the winemaking process itself.

Cassidee Shull, CAVE executive director, said it's this freedom to go beyond the normal structure that makes this event one of her yearly favorites.

"It reminds of when I was a dancer and we would put on student works," she said of her years attending then-Mesa State College, now Colorado Mesa University.

Amateur winemakers "have the freedom to have fun with their wines, to explore and experiment and try new things without all the restraints of a commercial winemaking facility," Shull said. "We like to encourage that amateur process."

While not all results are commercial quality, there are always bright spots that make a judge sit back and wonder where this winemaker might be in four or five years.

"Last year, we had a Bordeaux blend that was out of this world," said judge Christine Fuller, who's been at this particular game for 20 years or more. "My favorites this year were some of the dessert wines, which were really bright and clean."

She said the key to judging amateur wines is finding the wines with balance, not too fruity or too acidic, with few if any of the more-common problems that affect most amateur winemakers.

"We all have biases," Fuller noted, "but I always look first for any discernible flaws, if it's too oaky or corked or something really obvious."

Many of this year's 30 winemakers were first-timers, something State Viticulturist Horst Caspari said indicates there always are some winemakers curious to know whether their wines are as good as their family and friends say they are.

"You get winemakers who have been making wines for years and finally enter the contest just to see where they stand," he said. "I think for many this is the first time they get some real constructive feedback."

Contest supervisor and head judge Monty Haltiner, himself with several years' experience on the judging end, agreed, saying winemakers look forward to the judge's comments, even if the final rankings are disappointing.

"Having that feedback helps you to be a better winemaker," he said. "Even if you don't plan on going professional, making better wine is everyone's goal."

Perhaps the real highlight, however, is the sense of freedom you see, smell and taste in the amateur wines.

There are, of course, traditional wines such as Cabernet Sauvignon, Syrah, Cabernet Franc and the like, but how else to explain such exotic blends as raspberry/peach or wines made from tomatoes, pumpkins or this year's standout, a 100-percent Pueblo green-chili wine that "blew everyone's palate," Fuller said.

"It was beautiful on the nose, with such a great smell of roasted green chilis, but oh my god, it was so hot," she said, laughing. "And what would you serve it with? Brats?"

Shull also laughed when she heard that.

"See? That's that freedom that allows the winemakers to express themselves in different ways," she said. "It's lovely to see."

You can see and sample the wines yourself when the contest results are announced Jan. 21 during the annual VinCo conference and trade show at Two Rivers Convention Center in downtown Grand Junction. Information can be found at winecolorado.org.