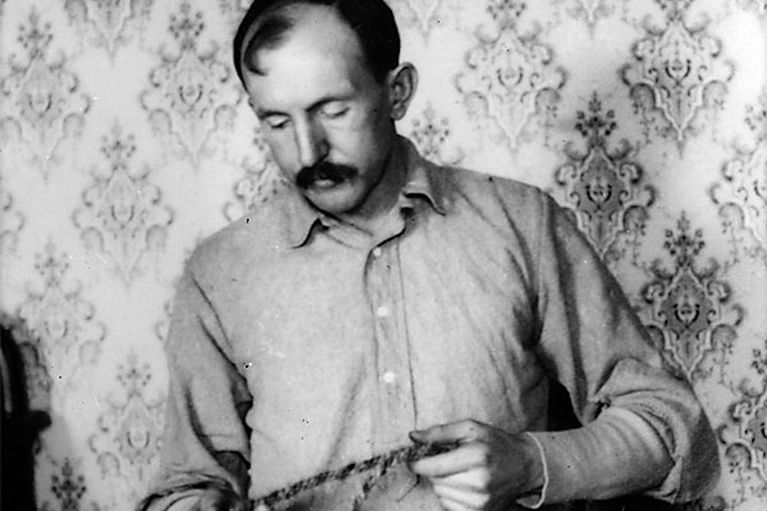 Tom Horn braiding a horsehair bridle while awaiting his trial and execution in jail in Cheyenne, Wyoming. 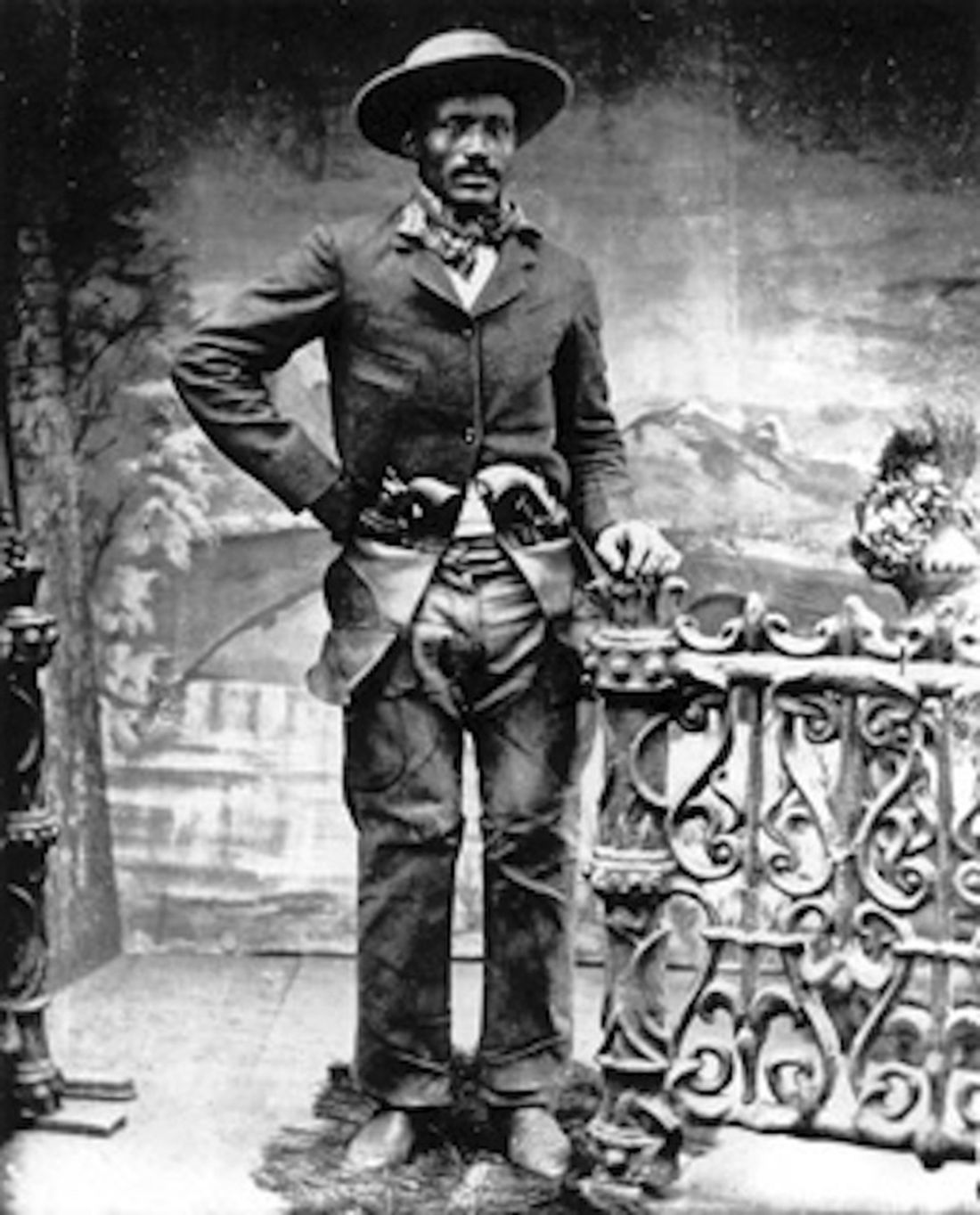 African-American cowboy Isom Dart was born a slave in Texas or Arkansas. He is believed to have been killed by Tom Horn in October 1900. 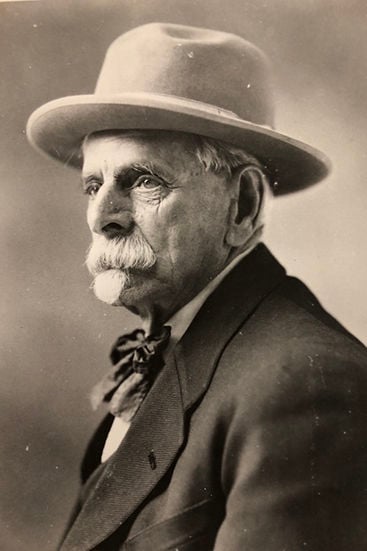 MUSEUMS OF WESTERN COLORADO Cyrus "Doc" Shores, a Colorado lawman, worked with Tom Horn in the early 1890s and was impressed by his courage and intelligence. But he later grew tired of Horn's moodiness and his eagerness to use his gun.

Tom Horn braiding a horsehair bridle while awaiting his trial and execution in jail in Cheyenne, Wyoming.

African-American cowboy Isom Dart was born a slave in Texas or Arkansas. He is believed to have been killed by Tom Horn in October 1900.

MUSEUMS OF WESTERN COLORADO Cyrus "Doc" Shores, a Colorado lawman, worked with Tom Horn in the early 1890s and was impressed by his courage and intelligence. But he later grew tired of Horn's moodiness and his eagerness to use his gun.

When Tom Horn was about to be hanged on Nov. 20, 1903, he realized several people present were tense, including Laramie County Sheriff Ed Smalley.

"Don't be nervous boys," Horn said. "You're only doing your duty."

Two cowboy friends sang a song for Horn — "Life is Like a Mountain Railroad." Then a minister prayed for him.

A hood was placed over Horn's head, and he stepped onto a trap door on the gallows. Then he dropped to his death — and into history and legend.

Tom Horn — sometime Pinkerton agent; veteran of military campaigns against Geronimo and his Apaches; civilian mule packer during the Spanish-American War; stock detective and self-described killer — had many friends in Wyoming, Colorado and Arizona. But he had also developed powerful enemies.

Historians still dispute whether he killed 14-year- old Willie Nickell in July of 1901 — the crime for which he was hanged. But there is little doubt he assassinated multiple suspected cattle rustlers at the behest of large ranch owners.

Two of those murders probably occurred in northwestern Colorado's Brown's Park in 1900, when cattleman Matt Rash and African-American cowboy Isom Dart were both killed in an ambush.

Horn boasted of his exploits relentlessly, including in an autobiography he wrote while in jail. Apache scouts he worked with in the 1880s named him "Talking Boy" because he was so chatty and boastful.

He was born in Missouri in 1860, but left home as a teenager. By 1880, he had moved to Leadville, Colorado, where he worked in mines and possibly on the newly arrived railroad.

He left Leadville in the spring of 1881 for Arizona, where he worked initially for ranchers. By 1885 he had joined the Army as a civilian mule packer under Gen. George Crook, who was pushing to capture Geronimo and his renegade Apaches.

Horn may have had a part- Apache wife, but he apparently abandoned her.

Although he won accolades for his action during a November 1885 incident in which U.S. Army Capt. Emmett Crawford was killed by Mexican militia, Horn left the army to take up ranching in Arizona. He rejoined briefly for the U.S. invasion of Cuba in 1898.

By 1891, Horn was employed for the Pinkerton agency in Denver, and by the turn of the century, he worked primarily for the cattle barons of Wyoming.

LeFors arranged to have a court reporter and another witness in a room outside the U.S. Marshal's office in Cheyenne, while he and a slightly inebriated Horn had what seemed like a friendly chat.

During the discussion, Horn told LeFors he had shot Willie Nickell from 300 yards away, and declared it was "the best shot I ever made and the dirtiest trick I ever done."

That confession wouldn't stand up in court today. But it was central in Horn's 1902 trial. His defense attorneys didn't dispute what Horn had told LeFors, but they claimed Horn and LeFors were just spinning yarns about people they had supposedly killed over the years.

However, the jury didn't buy Horn's story. Based on his confession to LeFors, and other boasts Horn made while drinking in a bar in Denver, he was convicted of the Nickell murder.

Horn was not convicted, however, or even arrested for the murders of Rash and Dart in Brown's Park. But there is third-hand evidence to indicate Horn assassinated the two men.

There are several reports of a meeting in Denver in early 1900 during which ranchers from Colorado and Wyoming, concerned about rustling near Brown's Park, agreed to pay Horn $500 for each rustler he killed.

Included at the meeting were Ora Haley, who owned the Two-Bar Ranch adjacent to Brown's Park, and Haley's ranch foreman, Hi Bernard.

Also present was Wyoming rancher John Coble, a friend and frequent employer of Horn in the war against rustlers.

Horn showed up in Brown's Park in the summer of 1900 as Tom Hicks, a cowboy looking for work. He soon returned to his rancher-employers with evidence of "the boldest, most outrageous cattle rustling job I have ever seen," said Hi Bernard.

Rash was ambushed in his cabin in early July 1900. Isom Dart was killed in October. And Horn talked repeatedly about them.

In November 1900 he told a Cheyenne newspaper reporter Rash and Dart were the two most notorious rustlers in the Rocky Mountains, although he didn't say explicitly he had killed them.

Pinkerton Detective Charlie Siringo said that shortly after the Brown's Park killings, he met Horn in Denver, and Horn confessed, describing the murders of Rash and Dart in detail.

Doc Shores also said he had been told that Horn confessed to the Brown's Park killings.

Shores, who was also a deputy U.S. Marshal and part-time Pinkerton agent, first met Horn in 1890, when he was tracking horse thieves for a theft from a ranch south of Gunnison. Shores followed the outlaws to southeastern Arizona, where a cattle rancher recommended his foreman, Horn, to assist Shores.

Horn and Shores tracked the horse thieves to an isolated cabin and arrested them without violence. Shores was impressed by Horn's nerve and intelligence.

"You sure have done a good job for me, and with your background as an Indian scout … I believe I could get you a job with the Pinkerton National Detective Agency," he told Horn.

A year later, when Horn was a Pinkerton agent, he helped Shores track down in Oklahoma two men who robbed a train near Cañon City. But by then, Shores had soured on Tom Horn.

"I was learning that on the long trail he was moody, insisted on his own way, and wanted the best of everything," Shores wrote.

Additionally, Horn had threatened to shoot a man who volunteered to lead the lawmen to a camp he believed the train robbers had used, but then couldn't find the camp.

"His courage was unquestionable, but he was too quick on the trigger for a Pinkerton man," Shores wrote of Horn. "I was beginning to think that perhaps I had been wrong in recommending him to the renowned detective agency."

Even so, Shores corresponded with Horn regularly over the ensuing years, and even requested his assistance on another train robbery investigation in April 1901.

But that never occurred. By April 1901, Horn was working primarily for John Coble. And Coble may have hired Horn to kill Kels Nickell, Willie's father.

Many people believe Horn shot the younger Nickell by mistake.

Whether Tom Horn was actually guilty of that murder, it set in motion events that eventually led Horn to the gallows. He was buried in Boulder, Colorado, where his brother lived.

Sources: "Tom Horn in Life and Legend," by Larry D. Ball; "Memoirs of a Lawman," by Cyrus Wells Shores; "The Bassett Women," by Grace McClure; "Ora Haley and His Two-Bar Ranch," by Elaine Carr, in the Outlaw Trail Journal, Vernal, Utah, Summer 2017.