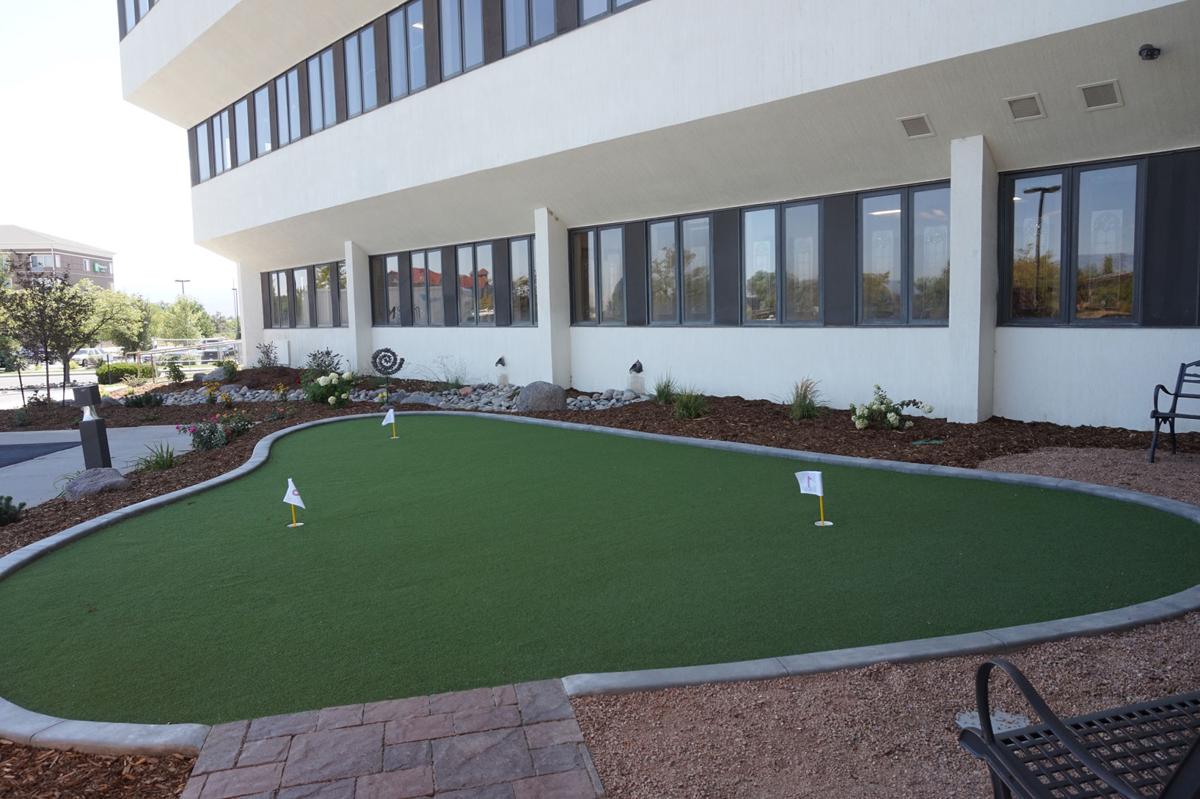 Special to The Sentinel

There’s a small putting green at HopeWest in front of the Herb and Laura May Bacon Center for Living Your Best, 2754 Compass Drive, where members can practice putting. The center was named after Herb Bacon and his wife, Laura May. Herb Bacon died Wednesday at age 90. 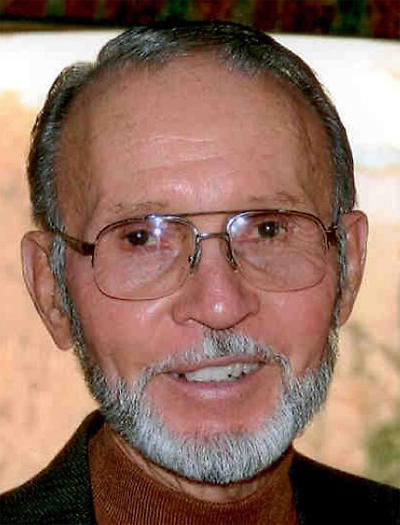 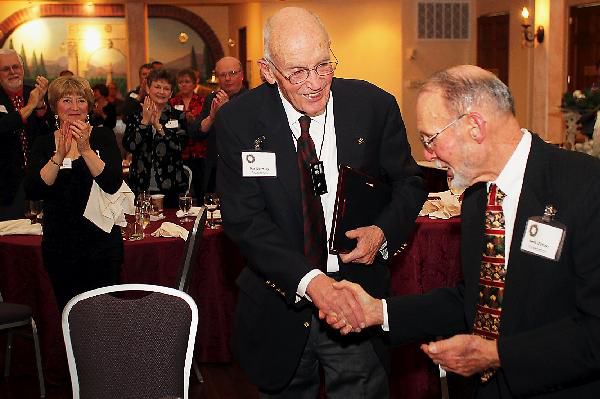 In this file photo from 2011, Herb Bacon, right, shakes Pat Gormley’s hand after Gormley was presented an award during a dinner in his honor at Two Rivers Winery. He was honored for 50 years of service to the hospital at a St. Mary’s Foundation event.

Special to The Sentinel

There’s a small putting green at HopeWest in front of the Herb and Laura May Bacon Center for Living Your Best, 2754 Compass Drive, where members can practice putting. The center was named after Herb Bacon and his wife, Laura May. Herb Bacon died Wednesday at age 90.

In this file photo from 2011, Herb Bacon, right, shakes Pat Gormley’s hand after Gormley was presented an award during a dinner in his honor at Two Rivers Winery. He was honored for 50 years of service to the hospital at a St. Mary’s Foundation event.

Bacon died Wednesday. He was 90. A service remains to be scheduled.

While he served on the boards of several organizations those of St. Mary's Hospital, Iliff School of Theology, and Colorado Mesa University were the ones he most treasured, said his daughter Amy Hill.

Bacon also served on the boards of the Grand Junction Area Chamber of Commerce, and the Goodwin Foundation.

He helped lead the effort to expand the educational offerings from what was founded as Mesa Junior College into the four-year institution now known as Colorado Mesa University.

Involvement in such organizations requires that one gives either their time or money, he always insisted on giving both and encouraged others to do the same, Andy said.

Bacon and his wife, Laura May, were among the first people Christy Whitney met when she arrived in Grand Junction in 1993 to found what is now HopeWest, providing hospice care and help for seniors through the Herb and Laura May Bacon Center for Living Your Best, 2754 Compass Drive. The Bacons made a significant donation to the center in 2017.

The Bacons' involvement with HopeWest was deep and long enough that the organization would have named the center for them "if they didn't give a dime," Whitney, president and chief executive officer, said at the time.

The Bacons were among the first people she met, Whitney said, and with Herb, "I got a lifetime mentor in a week."

Herb and his wife quickly agreed to support plans for a children's grief program when Whitney told them she had met a person with the right background in Grand Junction, Whitney said.

She also marveled at how both Bacons encouraged others to become involved, sometimes turning conversations about one nonprofit or charitable organization to a second, or a third, until hitting the right note for the listener, Whitney said.

"Do you keep a scroll in your pocket?" with the names of the organizations, she remembered once asking Laura May, Whitney said.

Bacon moved to Colorado from his hometown of Bird City, Kansas, earning bachelor's and master's degrees in economics from the University of Colorado. After graduation he joined his father and brother at the US Bank at Fourth and Main streets, where Wells Fargo Bank is still located. He held many positions over his 50 years as a banker, including chairman, president, and chief executive officer.

As such, he guided the bank through prosperous and perilous times, including uranium and oil shale booms and busts.

The downturns were stressful, Andy said, noting that his father knew many of the bank's loans would fail.

His father "was always more concerned with his customers and how they would survive," Andy said.

Bacon scanned the newspaper daily for the usual information, as well as positive tidbits that might escape others, such as news of promotions, business success and the like.

He'd then drop off a congratulatory handwritten note to the person, whether he knew them or not, frequently prompting them to remark, "Yeah, I got a Herb Note," Andy said.

Colorado Mesa University President Tim Foster was a recipient of the occasional Herb Note and saw them as "an indication of his kindness and gentlemanly way."

"There is not a building on campus he didn't support," Foster said.

Bacon never sought to be recognized for his gifts, Foster said, but when told a room would bear his name would respond, "OK, thank you."

“Herb was such a great man. I am blessed to have known him and think of him often while I try to be the kind of banker and community member he would have respected”, said Jeff Taets, chief executive officer of Timberline Bank.

He would ask potential donors to consider giving, sometimes suggesting a specific amount, other times leaving it open.

In one instance, he asked a prospect to consider a $40,000 donation, and said he and Eisenhauer would get back with him.

"What a shock that was for us."

Bacon is a member of the Colorado Business Hall of Fame.

He maintained strong ties to Bird City, Kansas, Amy said, remembering a trip about 10 years ago to Kansas with her father.

"We went to a thresher show," Amy said, chuckling at the seeming incongruity of the Grand Junction banker, globetrotter and philanthropist reliving his childhood memories.

Bacon still knew his way around Bird City and many of the people there, she said.

"He did a lot of good for that community" as well as for Grand Junction, Amy said.

Ultimately, said Andy, "He was a great dad."

The Bacons were well known for traveling the world and bringing back their experiences to the Museums of Western Colorado with "Where in the World is Herb Bacon" presentations.

Herb and Laura May visited more than 70 nations.

Bacon is survived by wife of 69 years, Laura May; and four children, Steve, Andy, Amy and Linda. He was preceded in death by his son Brad.

Memorial contributions may be made to HopeWest, 3090 North 12th Street #B, Grand Junction 81506