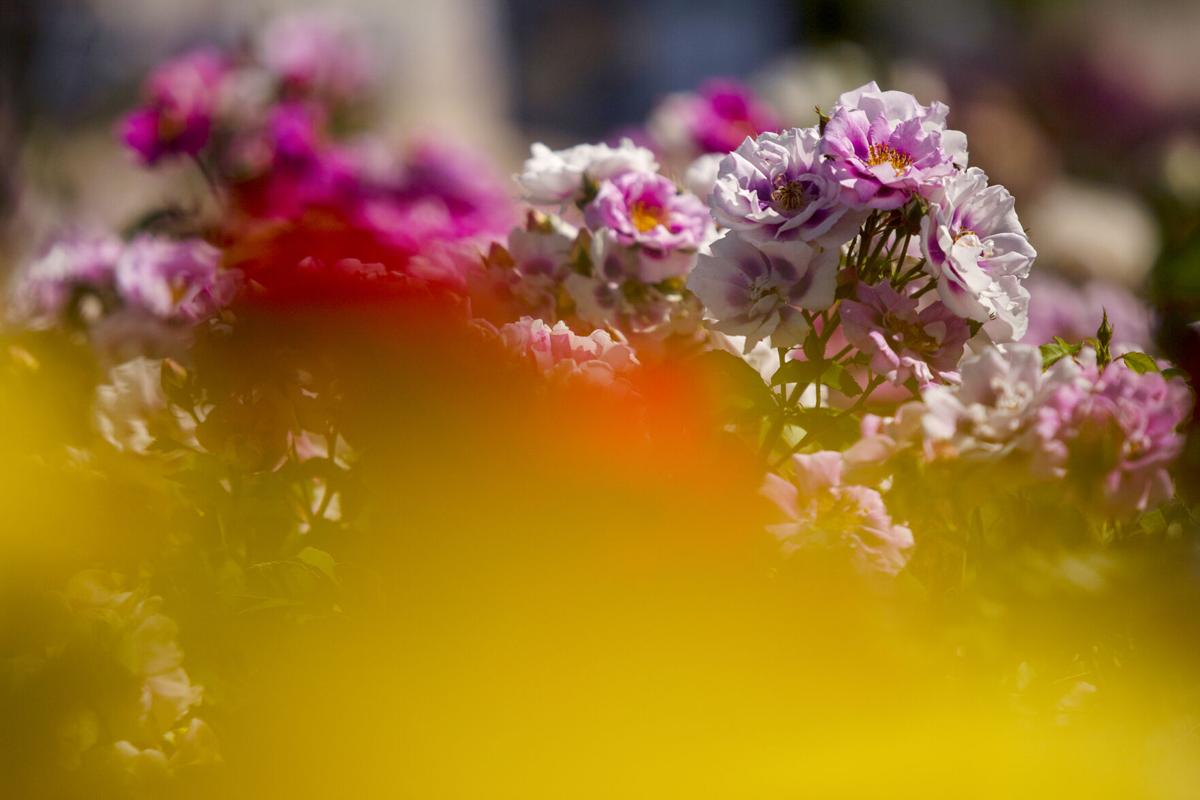 bushes of weeks roses in bloom and ready for sale at Bookcliff Gardens, 755 26 Rd, on Thursday. 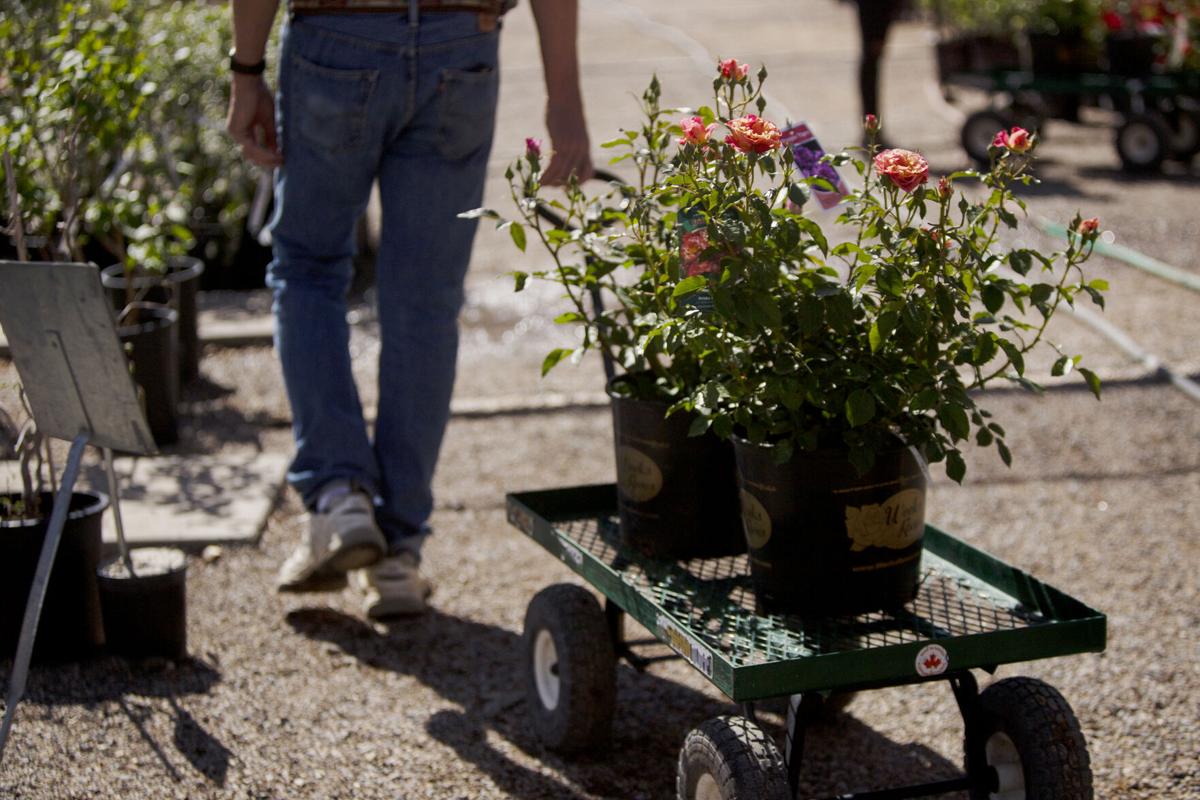 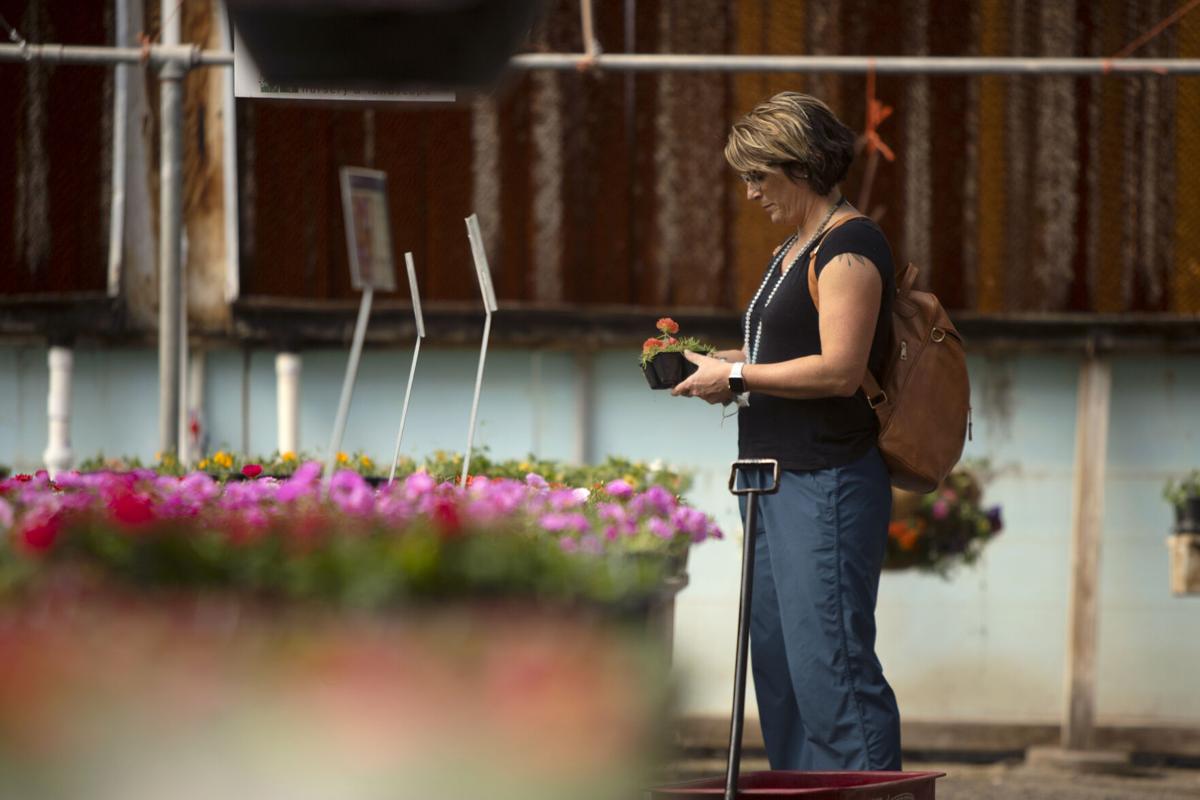 What started last year with people flocking to garden stores to purchase plants for gardening has continued this year. Thursday at Bookcliff Gardens, 755 26 Rd., Kate Pierce, above, chooses the perfect flowers to plant and Elson Shields, left, pulls a wagon filled with rose bushes through the aisles of plants. 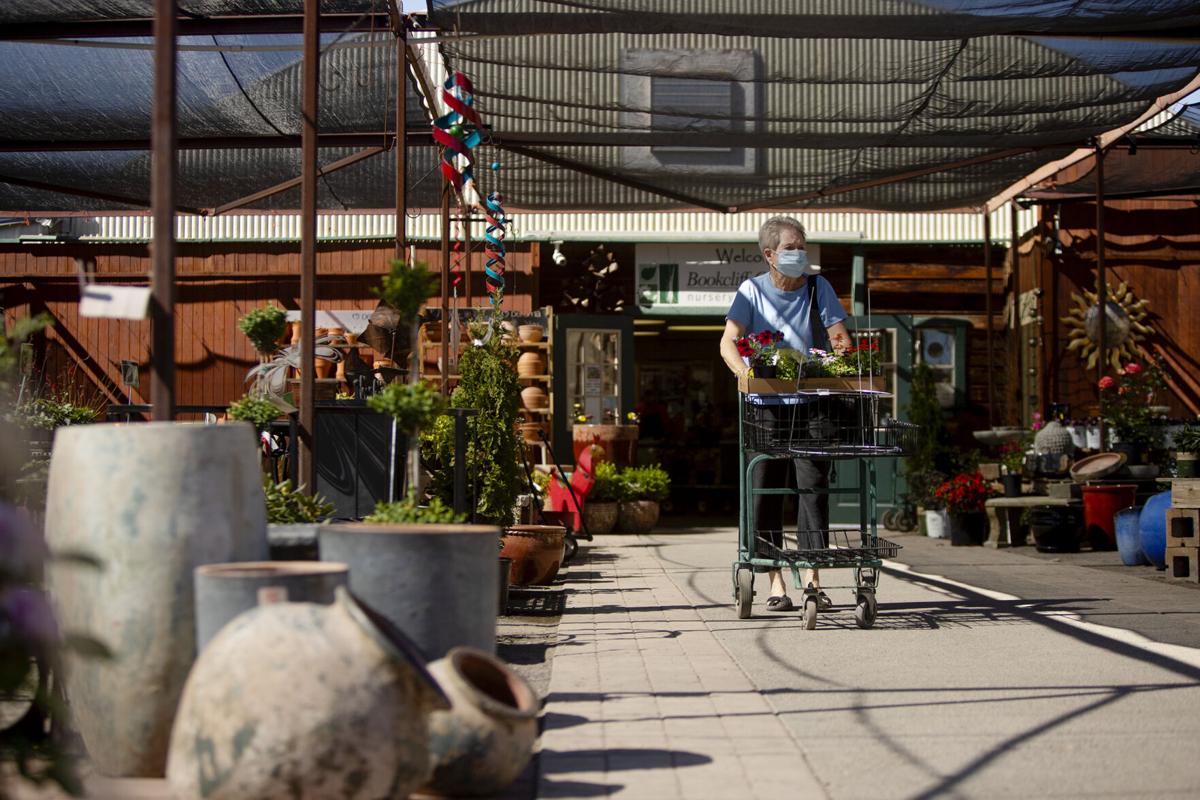 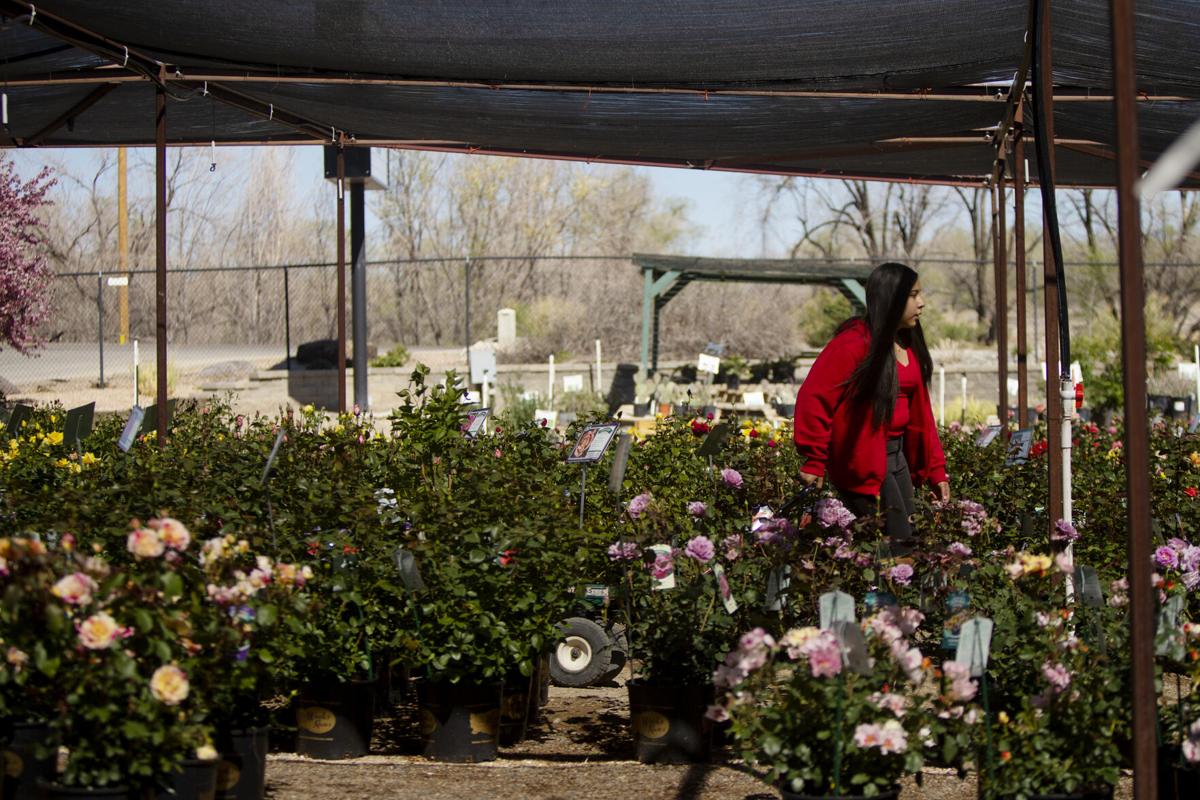 Lupita Baez, 13, rolls a wagon through the rose bushes at Bookcliff Gardens, 755 26 Rd., on Thursday.

bushes of weeks roses in bloom and ready for sale at Bookcliff Gardens, 755 26 Rd, on Thursday.

What started last year with people flocking to garden stores to purchase plants for gardening has continued this year. Thursday at Bookcliff Gardens, 755 26 Rd., Kate Pierce, above, chooses the perfect flowers to plant and Elson Shields, left, pulls a wagon filled with rose bushes through the aisles of plants.

Lupita Baez, 13, rolls a wagon through the rose bushes at Bookcliff Gardens, 755 26 Rd., on Thursday.

As kale and spinach flew off the shelves, people kept asking for fruit trees.

It was a year for gardens unlike any other. Seeds, tomatoes, zucchini, trees and nearly anything else growing at area garden centers and nurseries was snapped up by customers in 2020.

“Last year was such a surprise compared to any previous year,” said Chris Adolf, who co-owns Valley Grown Nursery with his brother, Evan Adolf, and parents, Kathy and Del Adolf.

There were massive jumps up in sales of vegetable plants, trees and shrubs, he said. “It was incredible.”

And as far as retail goes, 2021 “is making last year not look like a fluke,” Chris Adolf said.

This comes despite Valley Grown moving its retail side from 24 Road to join its wholesale business at 1702 10 Road in Mack.

“We were expecting less traffic, but not so. We’re doing good,” he said. Looking at the rough sales numbers, “we’re at the same point as last year.”

Not only that but this weekend and Mother’s Day weekend typically are the busiest time for vegetable plant sales in the Grand Valley.

Last year by this time, there had been a lot of panic-buying of vegetable plants that nurseries couldn’t keep up with, said Breann Fiihr, who owns Mount Garfield Greenhouse, 3162 F Road, with her husband, Travis.

Things have normalized somewhat in that regard this year and most people seem to be waiting until the 40-degree weather is out of sight to plant their annuals and veggies outside, she said.

“I think they’re listening to us when we say they can’t plant them until early May and Mother’s Day instead of panicking,” said Griggs, who expected to see vegetable plant sales to go from steady to hectic in the coming weeks.

Although customers may be waiting for veggies, they haven’t been patient for trees and shrubs. Those 2020 requests at Bookcliff Gardens for fruit trees prompted the Griggses to add them in 2021.

“We got them in March, and we have hardly any left,” Steph Griggs said.

The peach and apricot trees are gone.

“All we have left are one apple tree and a few Asian pears,” she said.

And it’s not just fruit trees. Trees in general “are really a commodity,” Griggs said.

People were home a lot more during the past year and are updating their yards, Adolf said. They’re adding or replacing trees or shrubs.

“So far this year we’ve had a lot of people asking for roses,” he said.

When it comes to landscaping plants, “I would probably put them (sales) equal with last year’s number if not higher,” Fiihr said.

She has had customers who either moved here a couple of years ago and are now ready to tackle the yard or have a new home and need to put in landscaping. To further complicate things, many growing nurseries had much of their inventory wiped out by all of last year’s buying frenzy, so “sourcing those has been difficult,” she said.

It’s like a resurgence of the ’70s houseplant trend, Fiihr said.

“I would call them plant collectors more than anything,” she said of Mount Garfield’s avid houseplant customers. “They want to own one of everything.”

If Mount Garfield posts anything on social media about getting new houseplants in stock, “they descend on us the next day,” she said. “They’re looking for oddities.”

“I think overall, because we’ve got better knowledge about COVID, people are enjoying their shopping experience more,” Fiihr said. Customers “wander around and enjoy the scenery and stop and smell the flowers.”

So many customers last year rushed around with a get-in, get-out mentality, not stopping to ask questions about plants or fertilizer.

“This year, we’re back to having that kind of interaction with our gardeners,” Fiihr said. “We like that.”

GET TO THE EXPO

The Western Colorado Home & Garden Expo presented by HBA of Western Colorado will go from 9 a.m. to 5 p.m. today and Sunday at the Mesa County Fairgrounds, 2785 U.S. Highway 50. The expo can be found in and around the CW Construction Arena.

Admission is $5 for adults, $3 for seniors age 55 and older or youth ages 13–18, and free for children 12 and younger. All tickets can be purchased at the gate.

Along with exhibitors offering ideas and products for landscaping, patio areas and the home, there will be food trucks at the expo for those wanting to get a bite to eat.

For information about the expo, go to hbaevents.com.