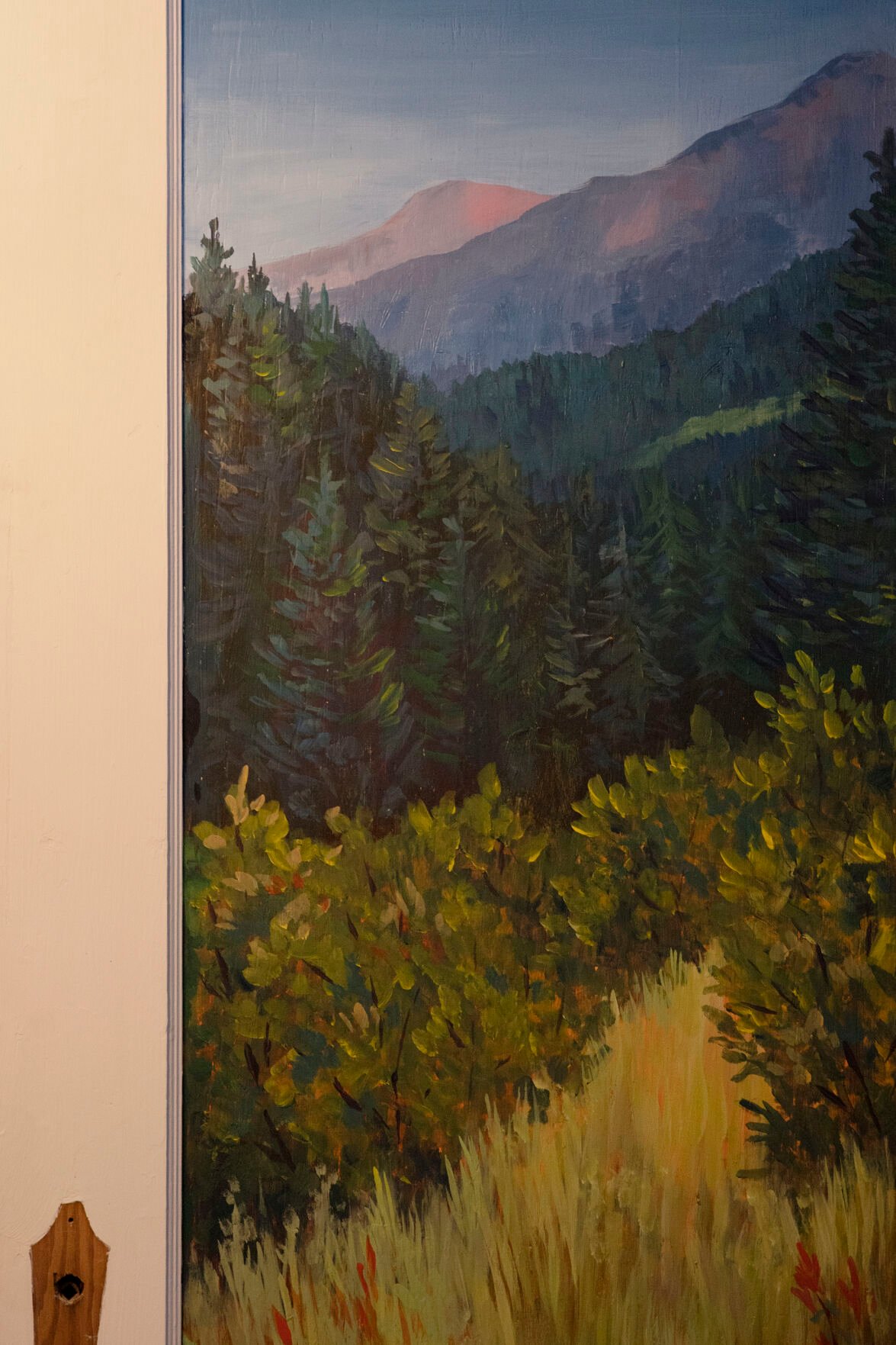 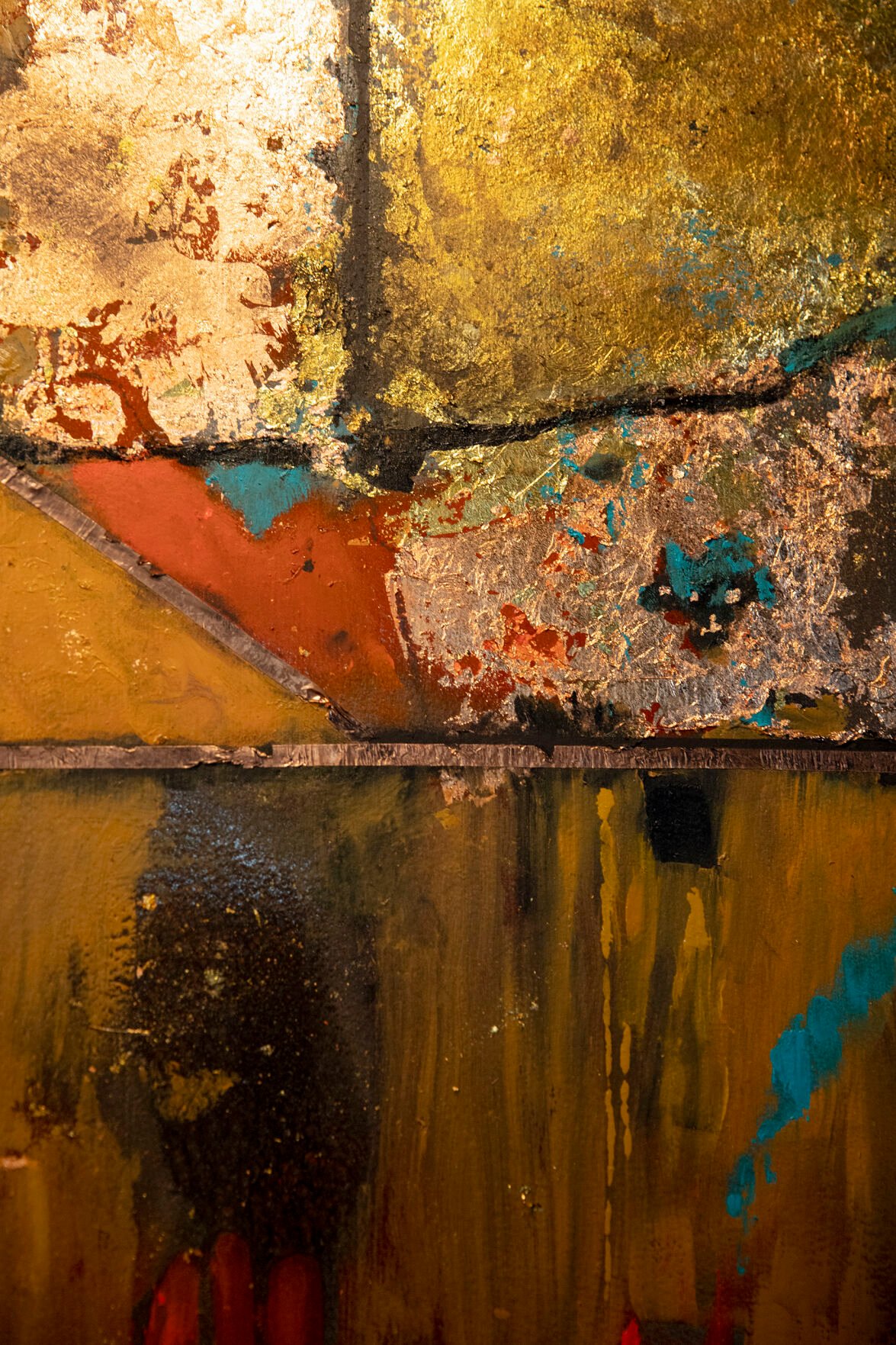 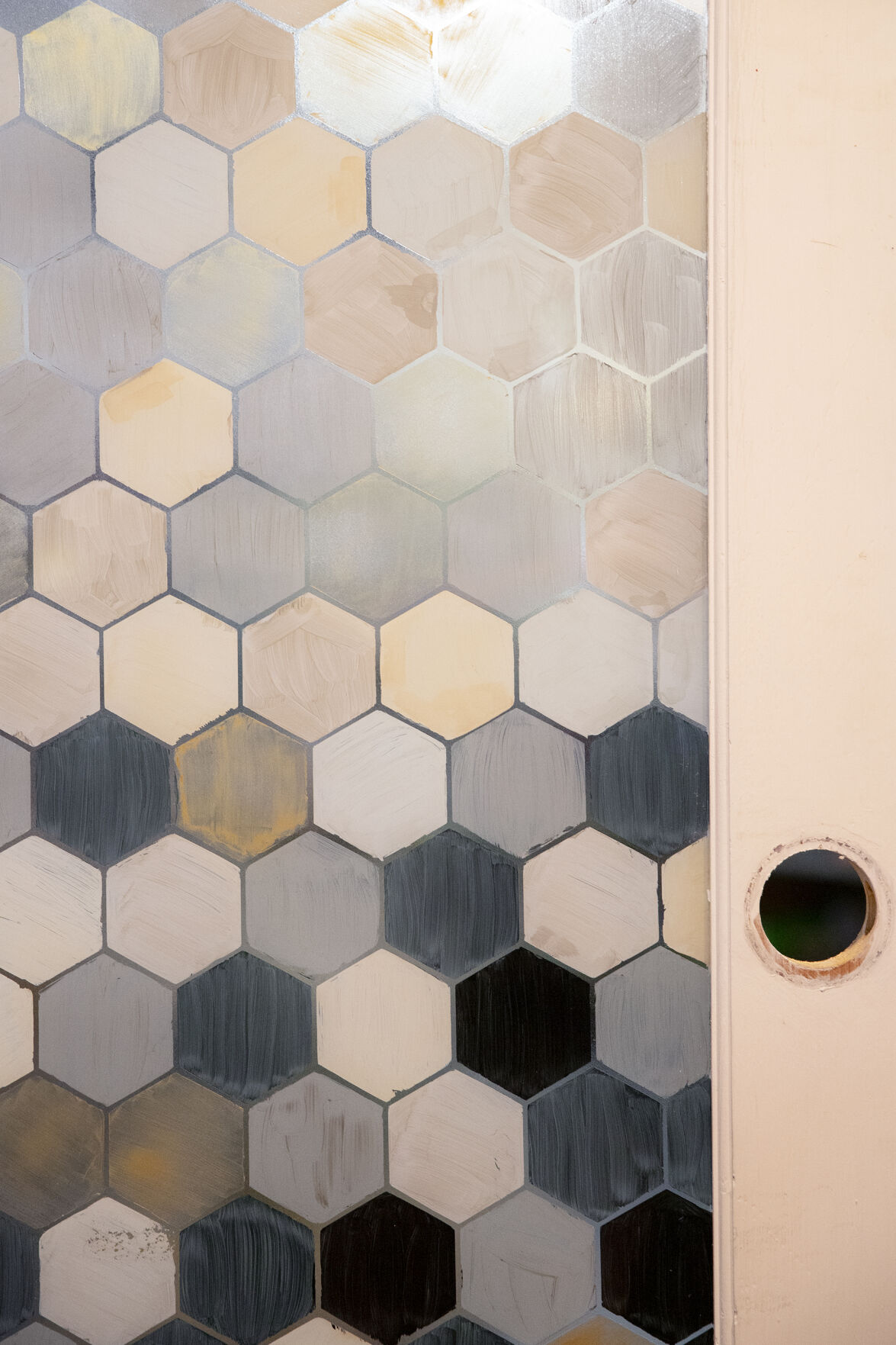 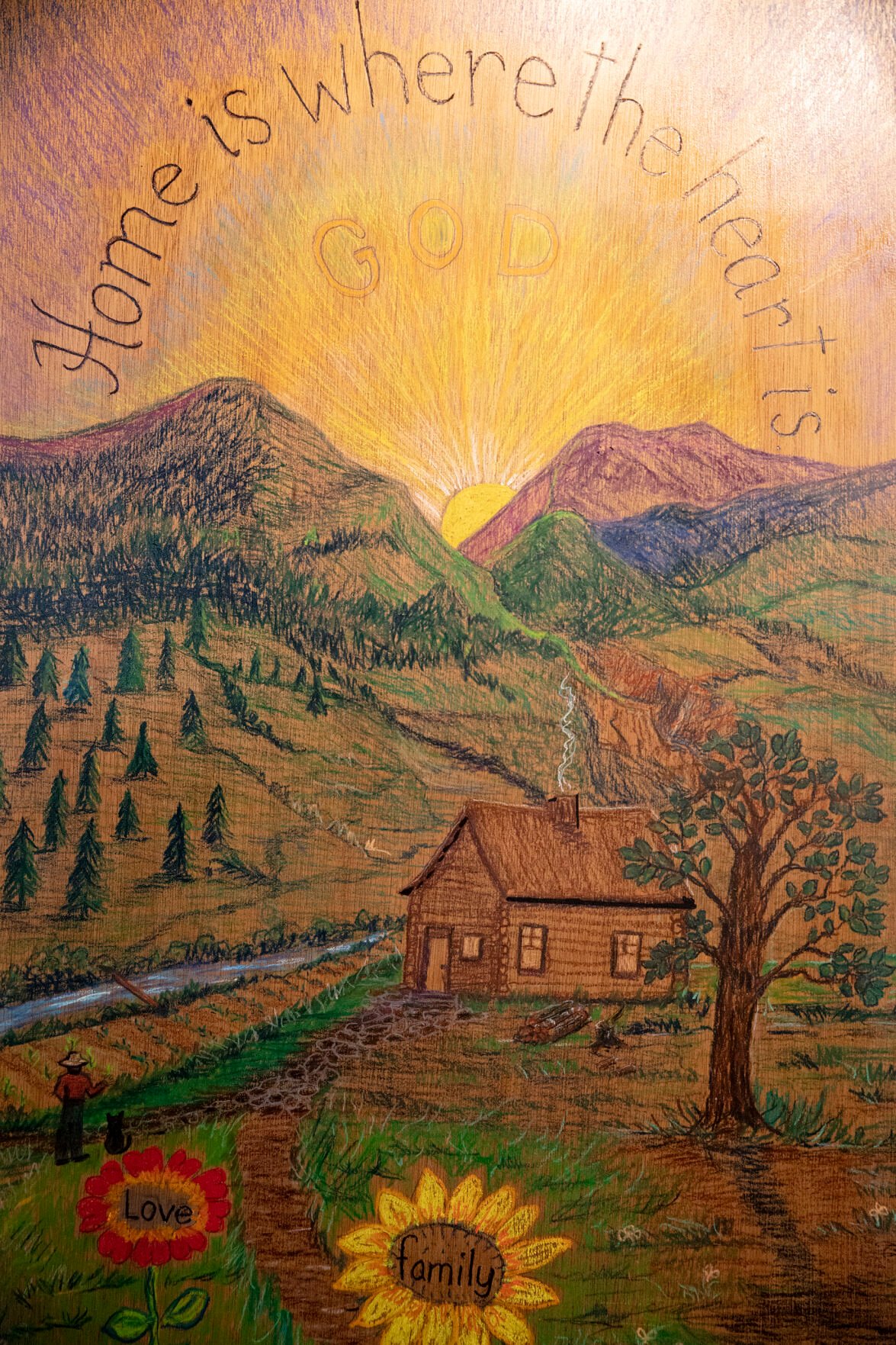 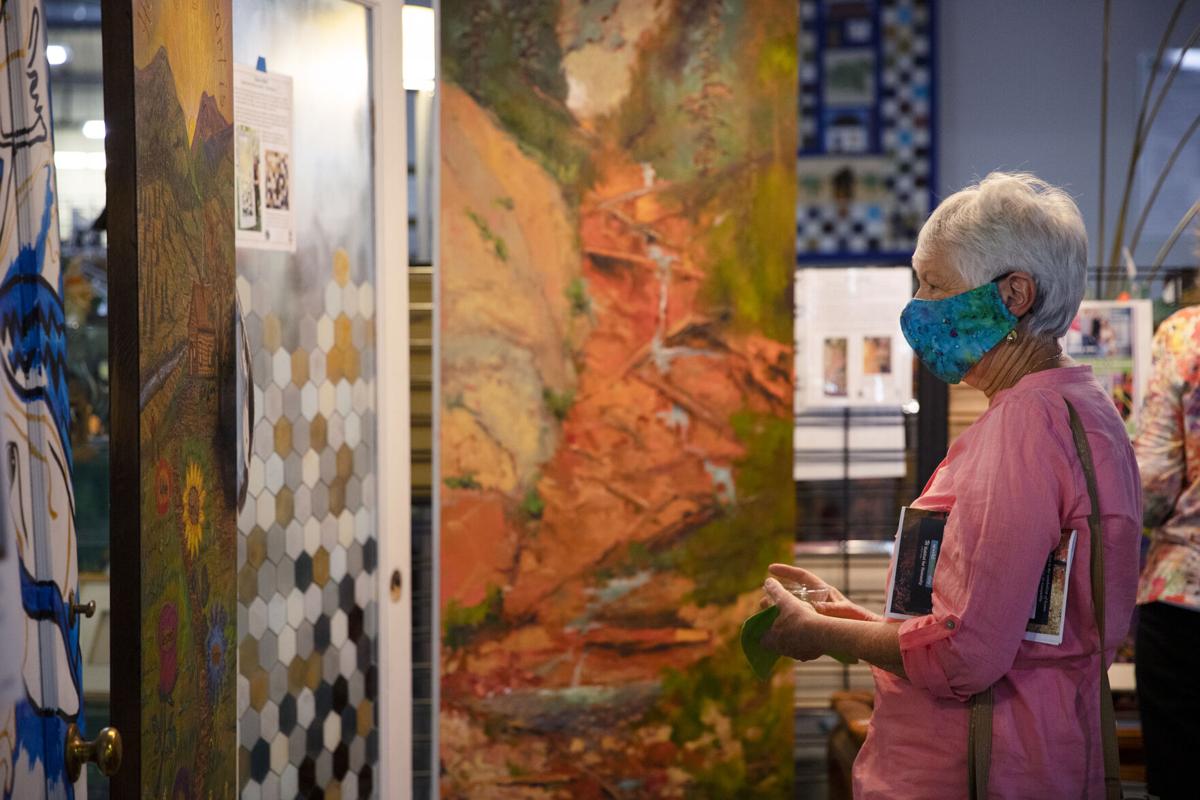 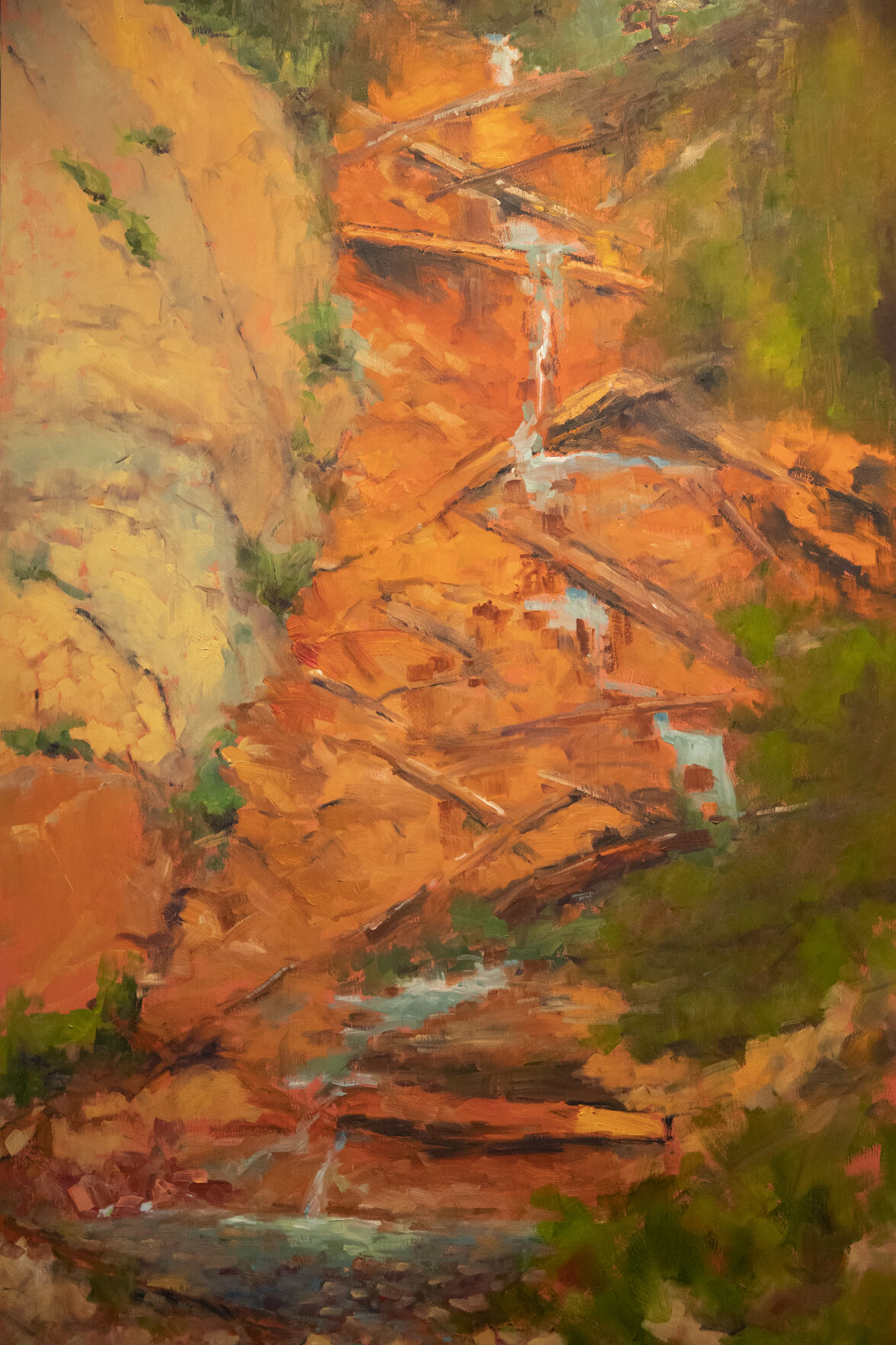 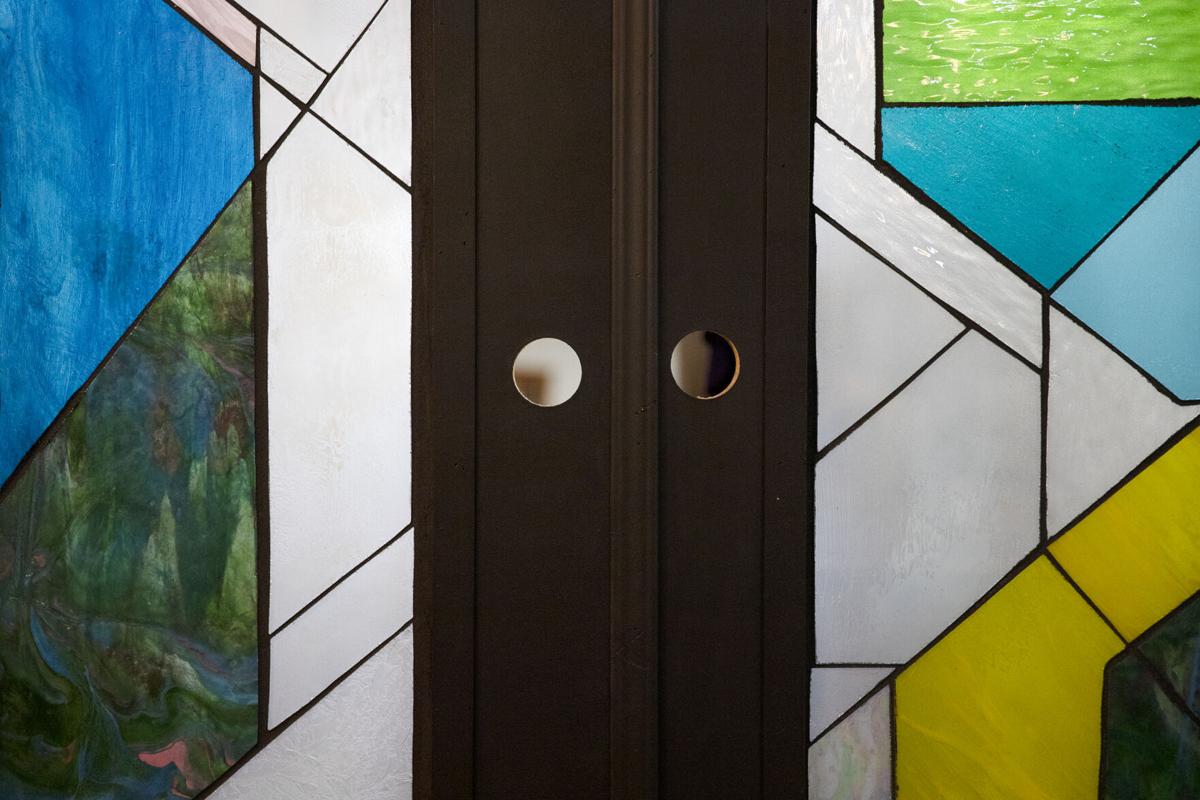 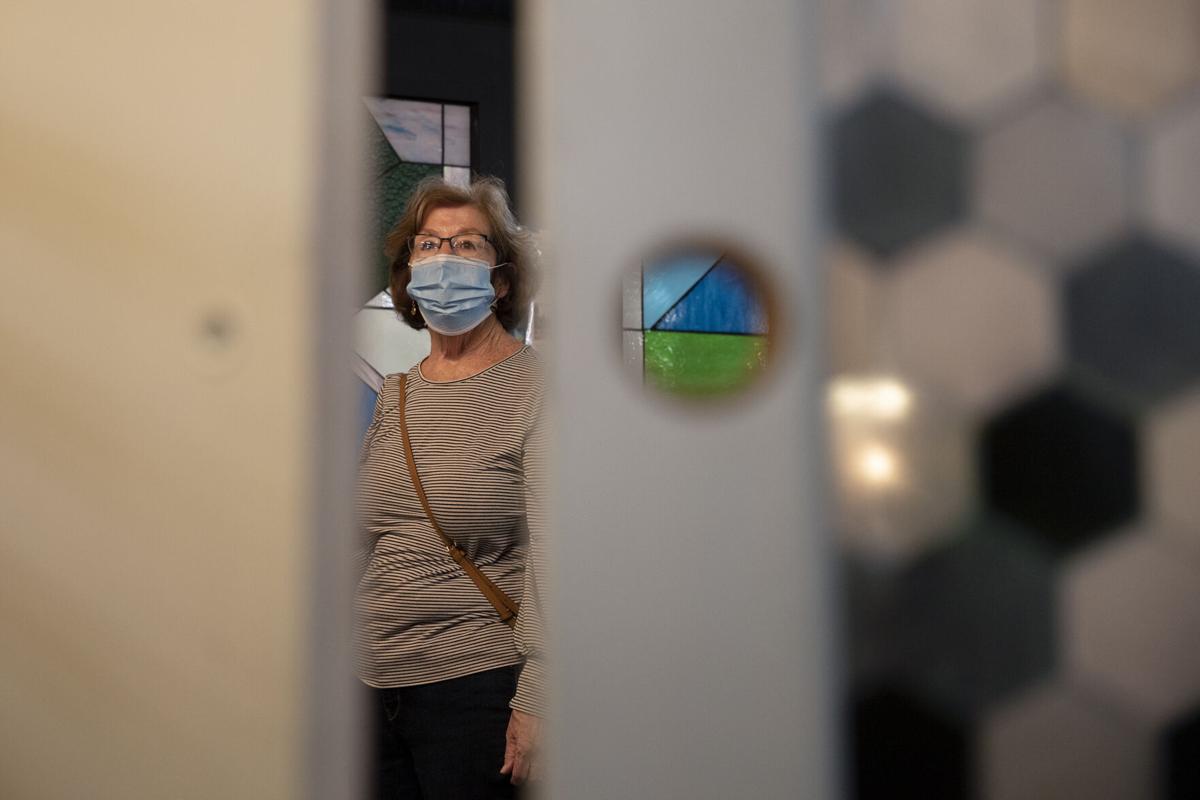 Pat Stiles, Habitat for Humanity volunteer, admires the work of the artists at the Restore Store, 2936 North Ave., on Monday. 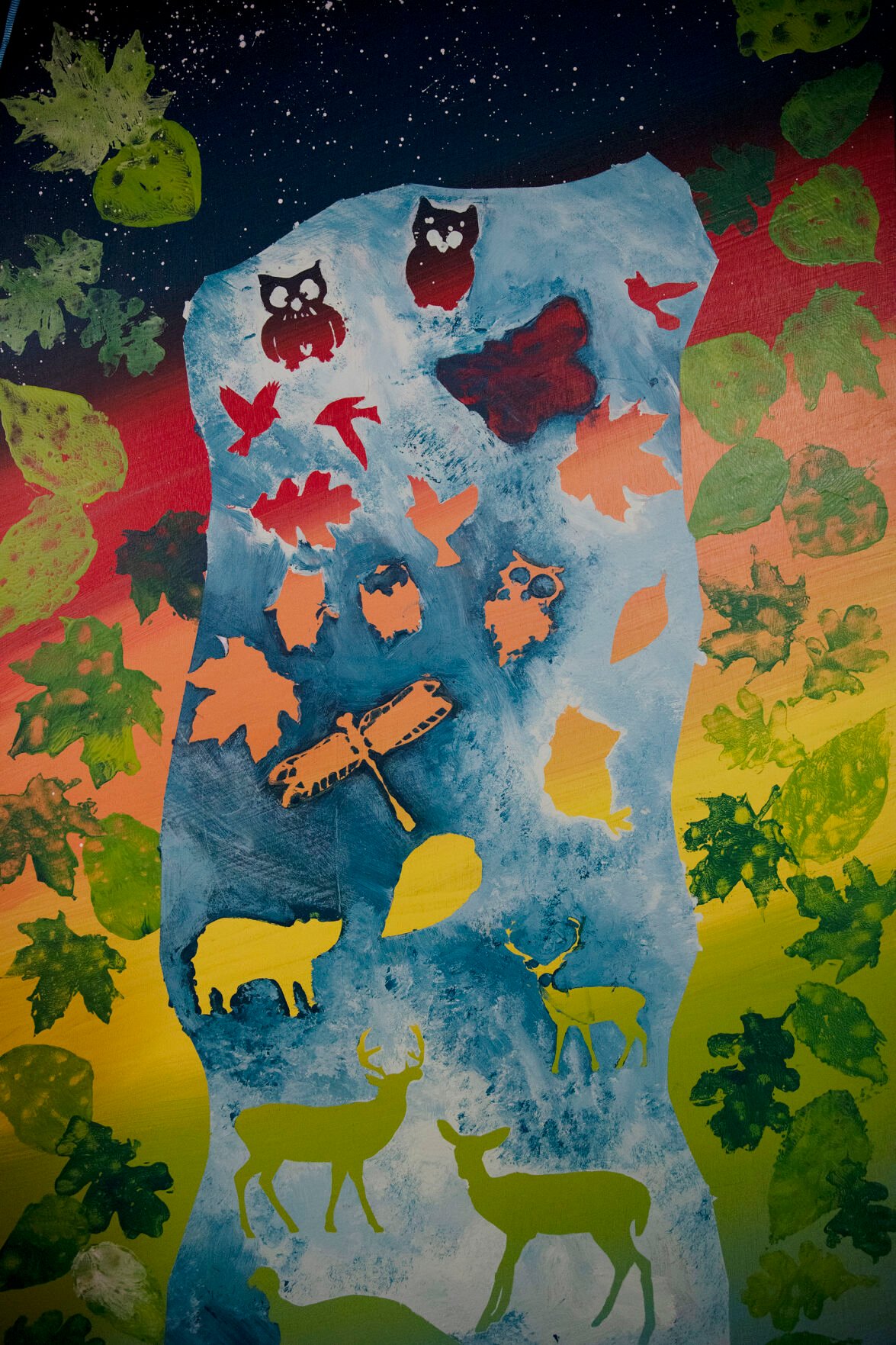 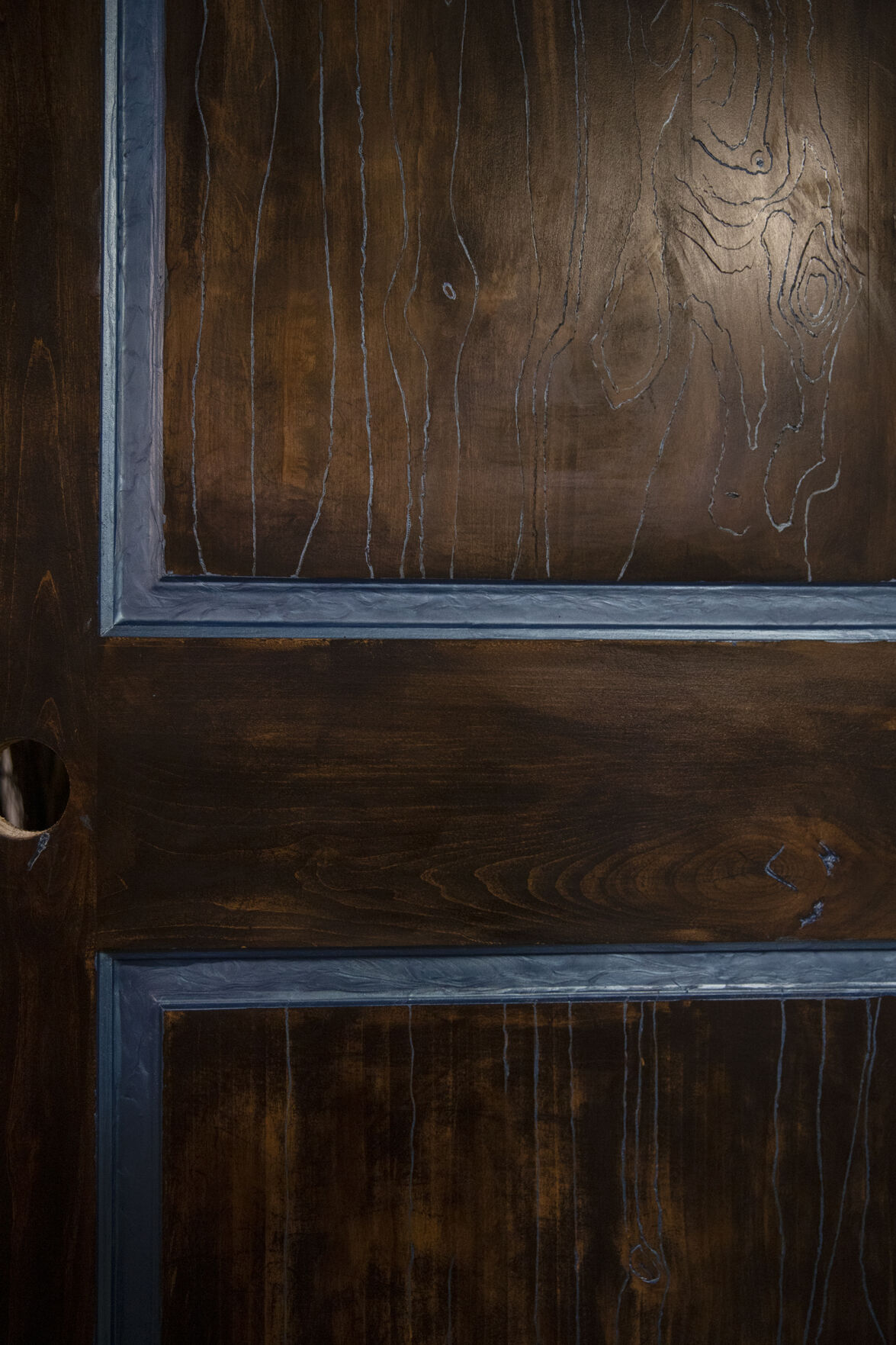 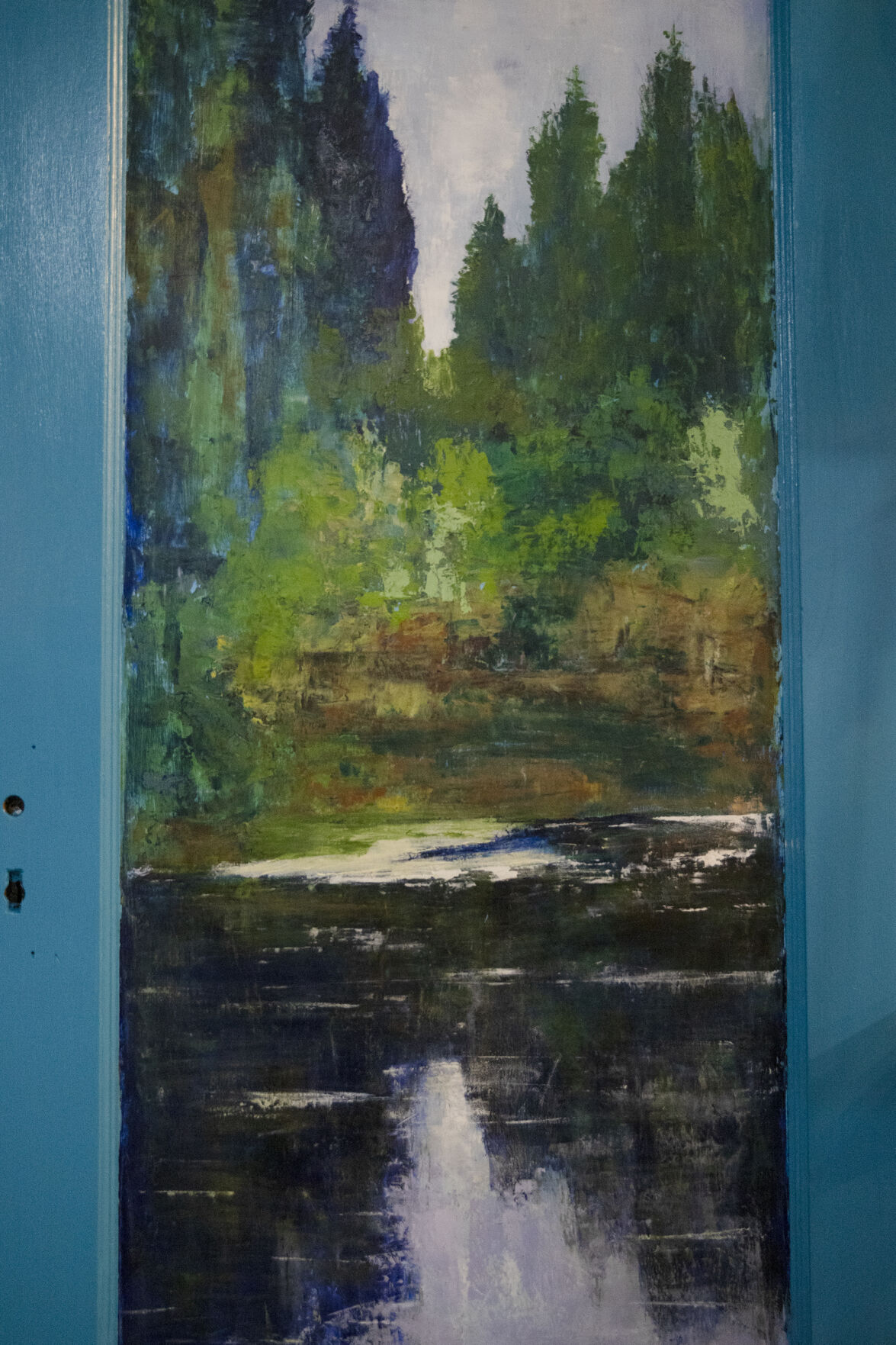 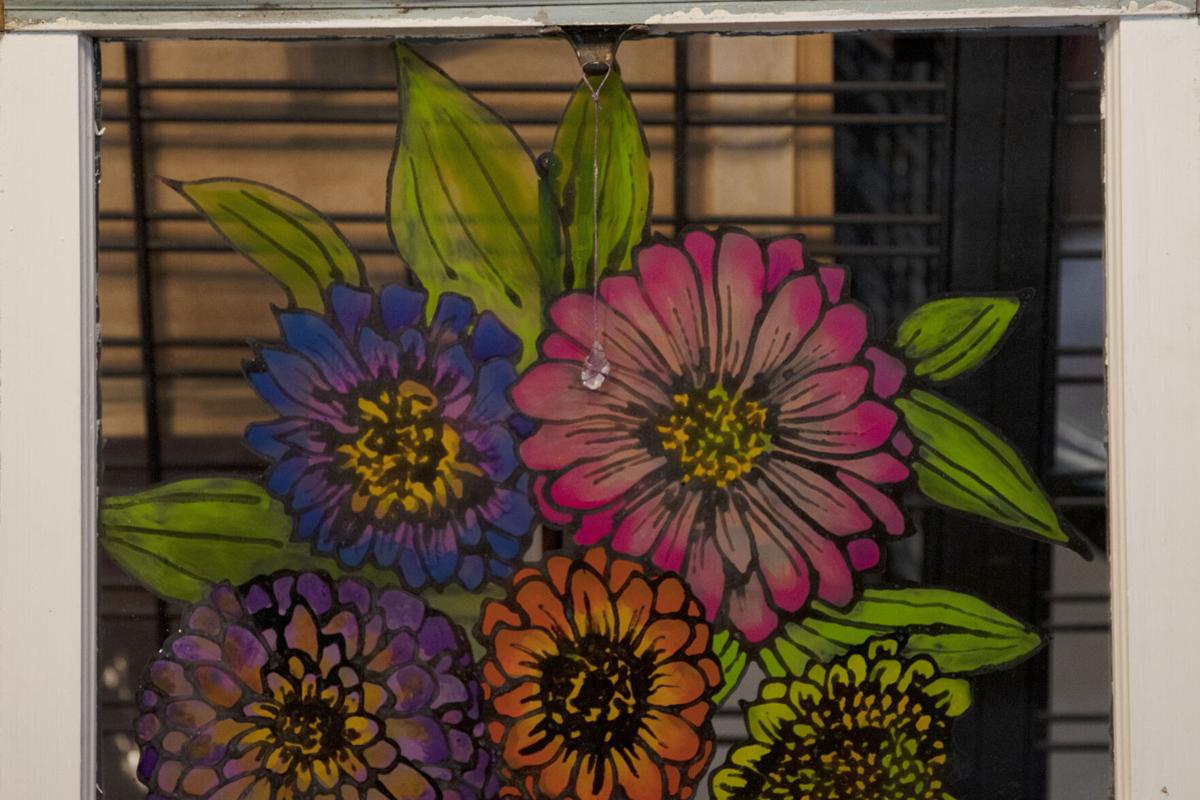 Pat Stiles, Habitat for Humanity volunteer, admires the work of the artists at the Restore Store, 2936 North Ave., on Monday.

As openings to the world or as shelters from it, doors and windows are symbols of home.

For a sixth year, Habitat for Humanity Mesa County has used doors and windows along with original art to draw attention to the need for affordable housing as well as to raise funds for its Homeownership Program.

Ten local artists and a youth group selected windows or doors from the Habitat ReStore and used them to create pieces of art for its “Expressive Doors & Windows” project. The doors and windows, including one door that was re-donated from a past year, were on display at the Habitat ReStore and part of a silent auction that ended Saturday.

Just in case you missed seeing those doors and windows, here are details from the artists about those new pieces.

Door: Jensen selected his door because it was pretty much a 30 x 80 foot plank with no sunken or “pocket” areas. However the narrow, long shape created an interesting challenge and not just any scene would work, the landscape artist said.

Fortunately, he spotted just the perfect vertical scene while driving from Durango to Ouray one morning. Right outside of Silverton, the sunrise lit up a waterfall flowing down a hillside. The light made the reds and oranges of the soil jump and saturate the water. He took a picture, jotted down a few notes to remember the scene, and when he got home he went to work in his studio.

“I’m always inspired by themes in nature,” he said.

Door: Moore has done several doors in past years for Habitat’s annual fundraiser. One she painted with her granddaughter. She did an acrylic pour on another. “I just thought it would be fun to do more of an abstract this year,” she said.

This year she used a narrow panel from a bi-fold door that would suit her contemporary idea.

She started out with spray paint and “I over-sprayed and I just let it run ... let the medium do its own work,” she said. She when back over the piece with oils, and then used copper and gold foils, which are fun to work with because they can fly around during the application process and you never quite know what you’re going to end up with, Moore said.

“I wanted to do some experimentation,” she said. “I do enjoy the abstract, and I usually like to paint big.”

Window: “I really enjoy working on art that incorporates light into it, so I figured a window would allow light to transfer through unlike a door,” Kraushaar said.

She chose a smaller window that could be displayed as window hanging and then got to work. “I tried something I had never done before,” she said. “I painted with glue.”

She mixed Elmer’s glue with acrylic paint and the effect on the glass is akin to faux stained glass, she said.

For her subject, she chose a theme that often finds its way into her artwork. “I love flowers and my favorite flower is the zinnia,” she said.

A decade ago her grandfather, who lives in Massachusetts, gave her seeds that he had harvested from his zinnias. She planted those seeds and has enjoyed the flowers and harvesting the seeds each year since. “They remind me of my grandparents,” she said.

Door: Ashman decided to tackle not one door, but two. The French doors are inset with glass, which she always keeps an eye out for as that is what she primarily works with.

Accomplishing the doors’ geometric design was what “I would like to call a happy accident,” she said.

Inspired by pictures she had seen on Pinterest of a beautiful glass piece at The Fig House in Los Angeles, she intended to create stained glass windows for the doors, but couldn’t figure out a way to keep them stable, so she had to rethink her approach. She ended up gluing her glass design to the doors, then grouting around the pieces. She covered the back of the doors with sea glass spray paint, giving them an opaque effect.

“I learned from doing it differently,” she said “It was fun to modernize the doors.”

Door: Meil has done several doors for Habitat’s “Expressive Doors & Widows” project in the past and all were solid doors until this year. “I wanted something the exact opposite of that,” she said.

Selecting a door with a long glass panel, “I had it in my head that I wanted to do a kind of mosaic style,” she said.

Using a vinyl stencil, she placed a mosaic of hexagons across the glass, then used acrylic paint to fill each hexagon with neutral, natural colors.

The hexagons on the lower end of the door are covered more completely with paint and the amount of paint used decreases as the pattern moves upward, letting more and more light through.

The effect gives the door a “vintage feel,” Meil said.

Door: The heavy, old door that became Axthelm’s canvas was in pretty bad shape when she got it. She had to sand it down more than once before preparing it for the cold wax and oils she wanted to use to create a landscape on the inset panel.

Once ready, “it came together pretty quickly,” said Axthelm, who usually works with pastels. “It was fun to watch.”

Instead of brushes, Axthelm used a squeegee tool, a dough scraper, a palate knife and paint rollers.

The landscape is one she has done before, a combination of Snake River scenery in Wyoming and Colorado mountains. She likes the peace and solitude of the piece “and right now, I guess we’re seeking that out from all the confusion that is going on in our lives,” she said.

Door: This is the second time children age 10 in younger in the youth group have had a door in Habitat’s project.

This time around artists Maya Kraushaar and Peg Oswald started working on the door by painting a rainbow from its top to bottom and printing it with leaves.

The kids then added the animals using stencils, Oswald said.

The piece is named “Forest Friends.”

Door: One side of Oswald’s door was antique looking, so she let it be. The other side she sanded down and painted with a landscape using acrylics.

“My husband and I do lots of hiking and I take pictures,” she said. The scene on the door is from “a photo from one of our hikes.”

She’s painted the scene with Indian paintbrush and distant mountain peaks a couple times and when she saw the narrow length of the door, it was the first scene that came to mind.

“I’d never painted anything that large,” she said. “It was interesting to do and fun.”

Door: Martinez chose her door because it was plain. “I think it was a closet door actually,” she said. “I brought it home and looked at it and I did have sleepless nights over what I was going to paint. That is what artists do.”

“I knew that I wanted to put in words, spiritual words, beautiful words. And flowers came to my mind and then I said, ‘well, a sunrise is beautiful also,’” Martinez said.

She created the piece using pastels — “I love to work with pastels. If you don’t like it, you can always rub it off,” she said — then she burned the words into the wood door so they would be more prominent.

With a steady hand, Martinez burned “Home is where the heart is” above the sun rising between mountain peaks. A man and his dog watch in the foreground, “and you can almost tell that the wife and the family are in the cabin, nice and cozy,” she said.

Door: Martin selected a door that was strong and sturdy with a solid core. “I’m kind of nerdy like that,” she said.

Instead of creating a painting on the door, “I wanted to do something more utility based, I wanted to make a statement piece,” she said.

She sanded the door to bare wood, drilled down the areas she really wanted to accentuate, painted the whole thing a metallic blue and then used several stains on top to get the dark color and look she wanted.

Martin liked being able to accentuate what was naturally already part of the door, and to be able to support Habitat as well.

It’s a great idea to let artists “interpret what would stand out in your own home,” she said.

Information about Habitat for Humanity Mesa County and the “Expressive Doors & Windows” project can be found at habitatmesa.org.

Scarlett Johansson and Colin Jost's handwritten save the date cards

'Vast majority' of Tulsa's record COVID-19 hospitalizations are from outside city, officials say

Emma Roberts: Lockdown allowed me to enjoy my pregnancy