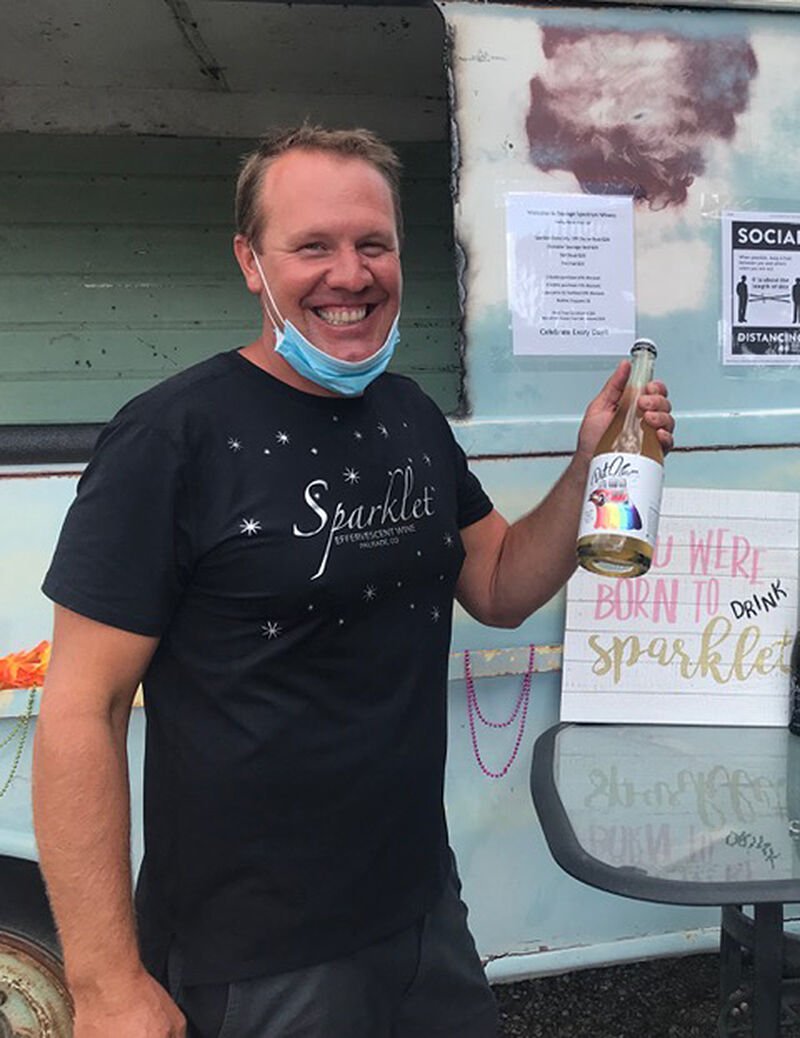 Photos by Dave Buchanan/Special to the Sentinel

Face coverings and social distancing are the norm at wineries, and Kaibab Sauvage still manages to have fun making affordable sparkling wines. 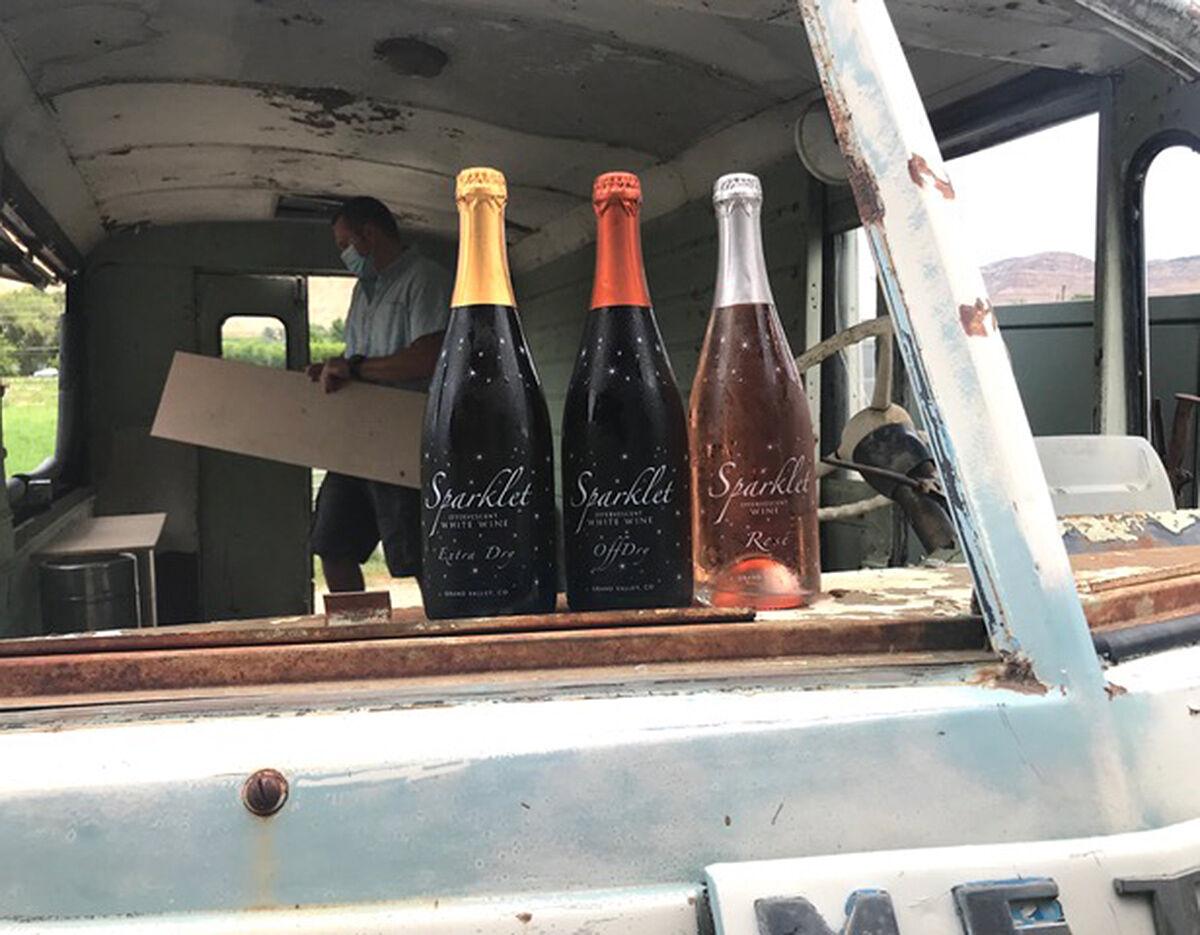 A lineup of Sparklet wines outlines Patric Matysiewski, winemaker for Sauvage Spectrum, as he works inside Patina the Bubble Bus, an unofficial mascot for the winery. Both he and winery partner Kaibab Sauvage have fun with not revealing their winemaking secrets. 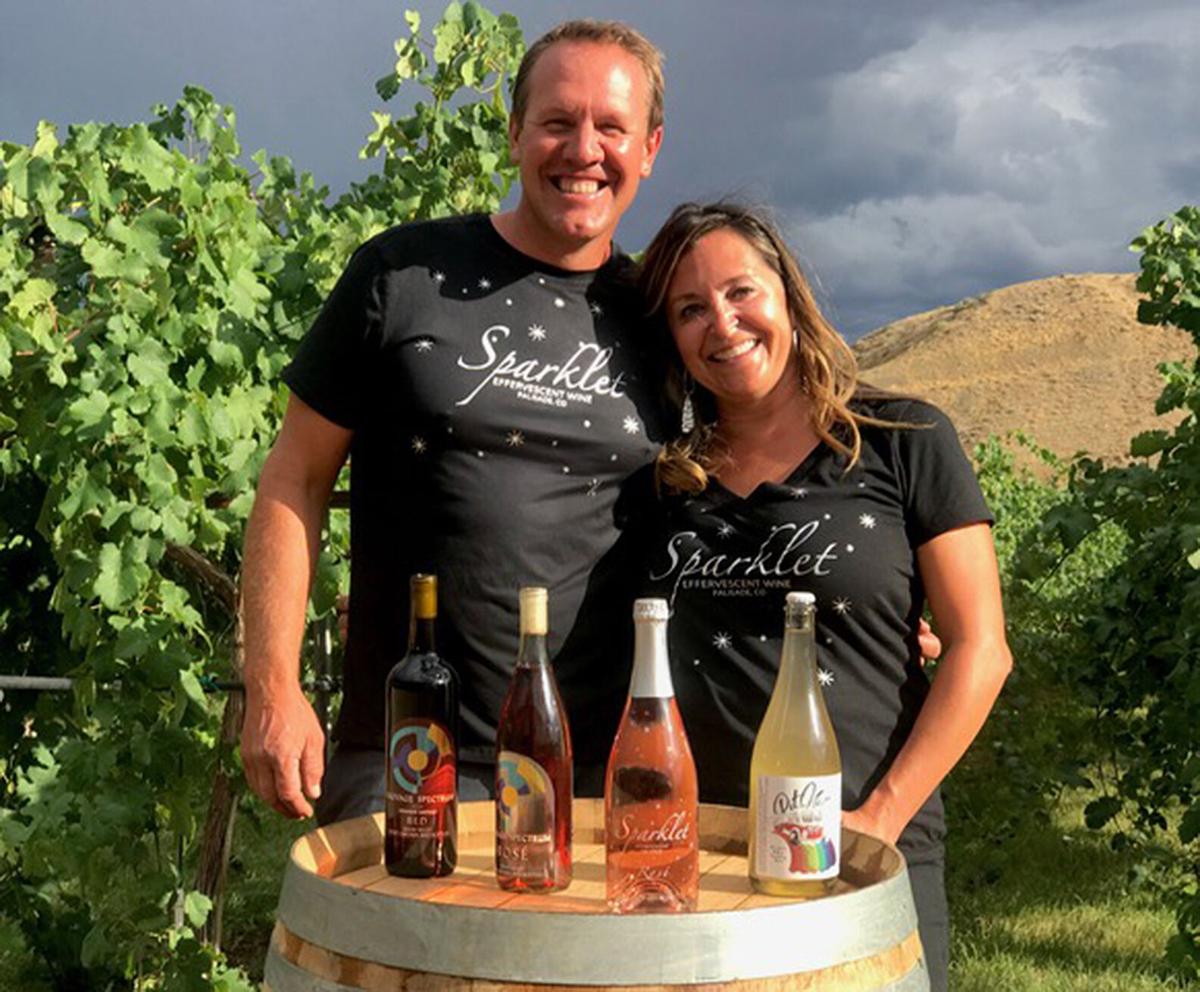 Winemakers Kaibab and Natasha Sauvage take a quick break during their winery grand opening on July 12 in the vineyards. This latest addition to the Grand Valley’s wineries features the effervescent lineup of Sparklet wines.

Photos by Dave Buchanan/Special to the Sentinel

Face coverings and social distancing are the norm at wineries, and Kaibab Sauvage still manages to have fun making affordable sparkling wines.

A lineup of Sparklet wines outlines Patric Matysiewski, winemaker for Sauvage Spectrum, as he works inside Patina the Bubble Bus, an unofficial mascot for the winery. Both he and winery partner Kaibab Sauvage have fun with not revealing their winemaking secrets.

Winemakers Kaibab and Natasha Sauvage take a quick break during their winery grand opening on July 12 in the vineyards. This latest addition to the Grand Valley’s wineries features the effervescent lineup of Sparklet wines.

You won’t find many American-made sparkling wines on the liquor store shelves. There are a few, but aside from a small number of well-known brands, American winemakers generally stay away from sparkling wines.

The reasons are several, including the time and expense in making a wine with bubbles, but mainly because Americans don’t buy or drink much sparkling wine, not like the French or Italians or German or, well, most European countries.

Nothing serious here, folks, just wines you could drink every day without busting the bank. Or needing a degree in viticulture to figure out what’s in the bottle.

Besides, Sauvage won’t tell you what’s in the bottle, that’s part of the current mystique, but it’s not that important.

“What’s important, to me, is people like my wines,” he said while leading a curious visitor on a fast-moving tour of his winery on 676 38¼ Road in Palisade during the grand opening July 12.

This won’t be the first time you’ve enjoyed wine made from grapes Sauvage has grown.

He’s a self-described geek — part-farmer, part-scientist — who has crafted a reputation among local winemakers for the quality and varieties of the grapes he grows.

It’s a full-tilt lifestyle that often tests his ability to balance all he would like to accomplish with the time, energy and money available.

“It’s a bit like a three-legged stool, you know?” he asked during the introductory tour. He laughed. “And now there’s winemaking. I’m running out of bandwidth.”

He forgot to add “being a husband,” which certainly demands a lot of bandwidth. He and Natasha Hickman were wed June 2 in Palisade.

Sauvage has handed much of the winemaking to his partner and winemaker Patric Matysiewski, who honed his skills working for wineries in Denver, Littleton and Breckenridge before being lured by a promise of new adventures.

Now, the two are producing Sparklet, their proprietary name for a 100-percent Colorado-grown sparkling wine.

Produced with an eye on value (everything under $20), these fruit-forward effervescent bubblies are intricate and yet fun to drink, as the visitors to the grand opening were quick to announce.

“I had this at dinner the other night at a friend’s house and decided to buy a couple of bottles for myself,” said Karen Bishop of Palisade, clutching two bottles under her arm. “We’re going to Oregon soon to visit some friends who are really into wine and I’m taking these with me, to show them Colorado really can produce nice wines.”

Much of what is accomplished in the winery is proprietary, from the blend of grapes to the fermentation process.

“Patric has some tricks about that,” was all Sauvage would reveal.

The wines are balanced and well-made, and a crimp cap (like a beer bottle) rather than a cork keeps the sparkle alive. The sparklers are available in off-dry and extra-dry versions as well as a full-bodied rosé.

“We call it a ‘Bro-sé’,” said Sauvage, pouring samples while hosting guests in the spacious winery where shiny tanks line one wall and oak barrels another.

The effervescent wines are unoaked; the barrels are for the Domaine Sauvage Red Blend, the as-yet only still wine being sold.

There also is a pet-nat, a popular style of what’s likely the oldest method for making sparkling wine: unfiltered, naturally fermented-in-the-bottle. A layer of yeasty sediment lies at the bottom of each bottle and Sauvage showed guests Tom and Patricia Meschino of San Diego how to upend and slowly twirl the unopened bottle to mix the cloud of lees.

This imparts a yeasty richness and unfiltered obscurity to the wine, with flavors of tropical fruit sliding into notes of watermelon, grapefruit and raw cashews.

Sauvage has managed vineyards and cultivated grapes in the valley since 2006 and for the past decade or so has focused on winter-hardy varieties such as Verona, Petit Pearl, Vignole, Aromella, among many others.

These are hybrids, painstakingly bred to develop the desirable flavors of one parent (often a European vinifera) with the American native labrusca grape’s ability to withstand extremely cold winters.

“I know how well some of these American grapes will do here,” Sauvage said. “You have to balance the grape growing and the winemaking with the product, and I think Patric and I have a terrific product.”

“Now that Kaibab has exposed me to these American grapes, I really understand what they are capable of,” he said. “They make some really fine wine.”

Matysiewski uses the many contacts he made while working the Front Range wine market to develop a market for the Sauvage Spectrum wines.

COVID-19 made the spring a difficult time to enter the market, but Matysiewski’s experience paid off.

“Bars and restaurants don’t necessarily want to bring in a new product right now, they want to stay with the tried-and-true,” he said. “But if they tasted our wine, it was pretty much an instant acceptance.”

A key addition to the winery, more attitude than alcohol, was Patina the Bubble Bus, a 1959 International Metro stand-up delivery truck Sauvage and friends retrieved from an early grave in a nearby vineyard.

It doesn’t run, has no brakes or windshield and decidedly shows years of neglect. And that’s the point.

“I don’t think Kaibab traded much more than a case of beer for it,” recalled Matysiewski. “He towed it out of a field with a backhoe. Once it was here we cut a hole in it, pressure washed it and it’s as good as new. We don’t want to lose the attitude.”

At some point Patina may become a bar for the outdoor seating area, but that’s going to take more bandwidth than is available at the moment.

“And winemaking, don’t forget that, although Patric does most of it now,” Sauvage reminded a listener.”I guess that sounds like a lot, doesn’t it? But that’s our story.”

Kylie Jenner and Travis Scott are 'acting like a couple again'

Scientist with sickle cell fights for a cure

A partnership with weight