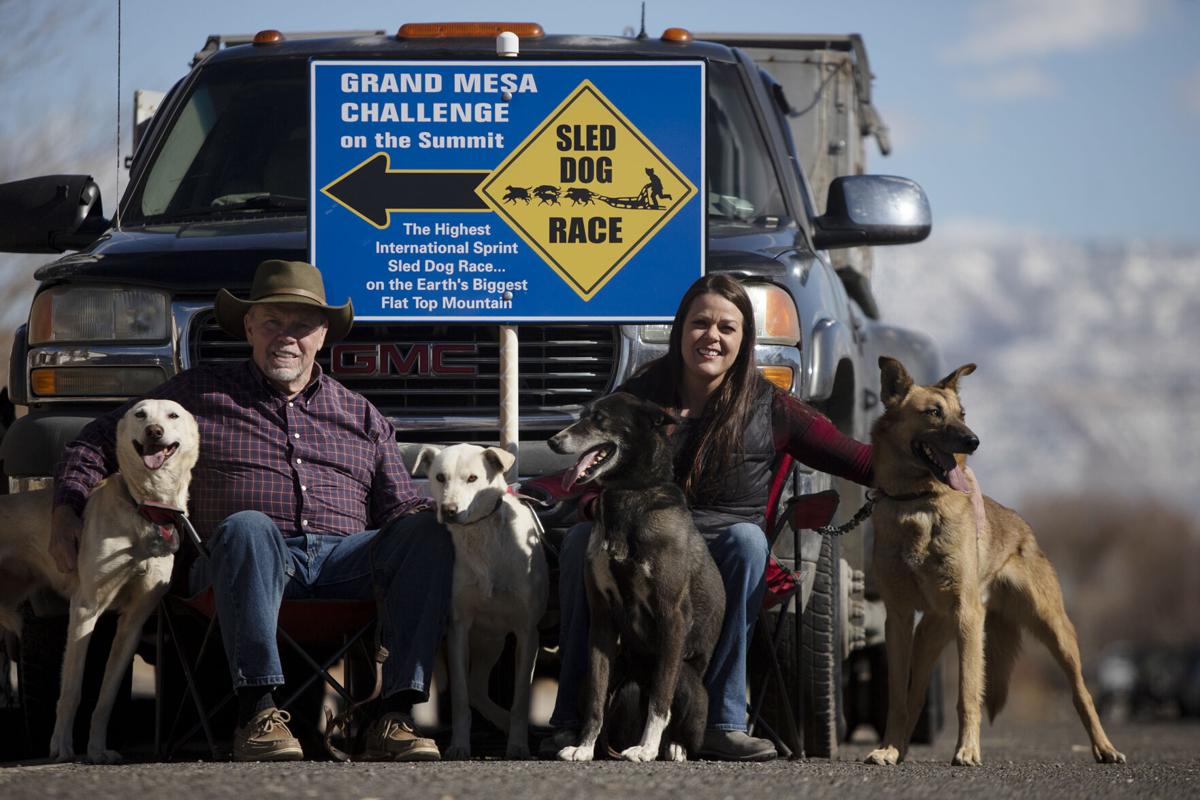 Jesse Miltier, left, and Janean Sheley pose for a portrait with Miltier’s sled dogs, three of which will be racing with Sheley when she goes out for her first sled dog race during the Grand Mesa Summit Challenge Sled Dog Race on Saturday and Sunday, Feb. 27–28. 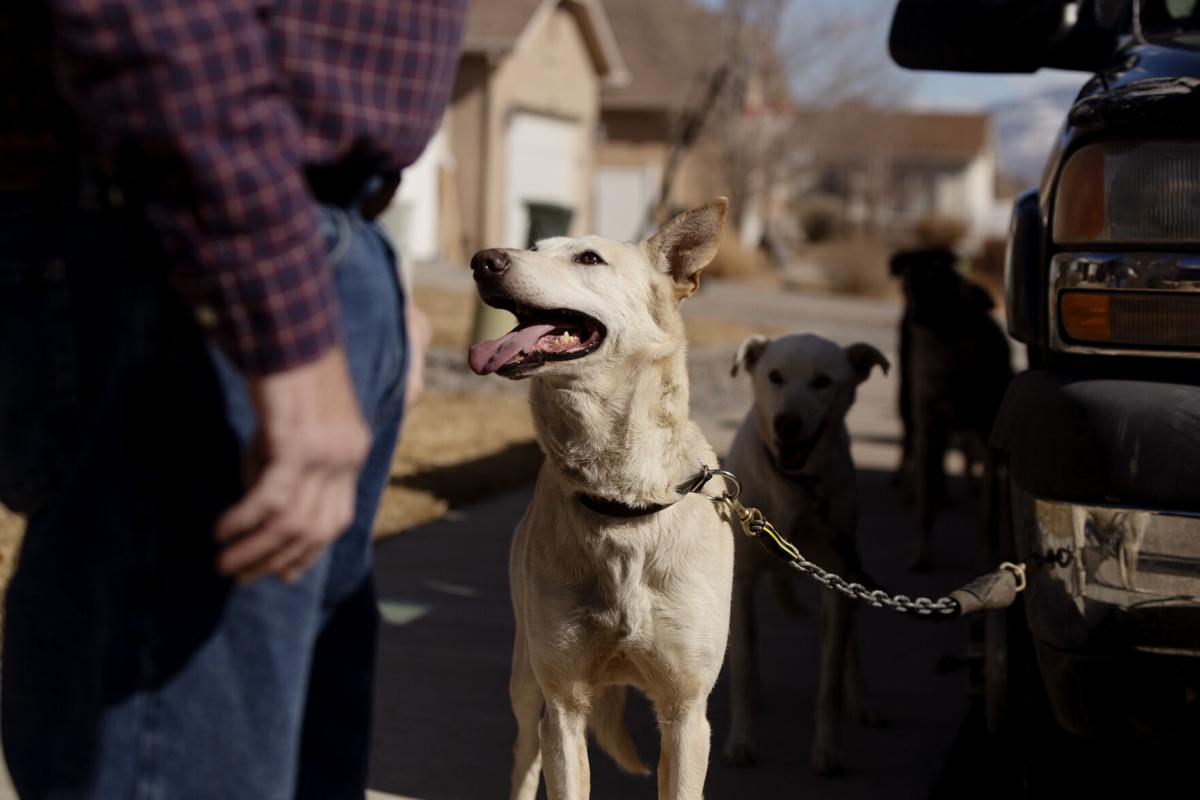 Whitney is one of 18 sled dogs owned by Jesse Miltier, who has raced with sled dogs for 45 years.

Jesse Miltier, left, and Janean Sheley pose for a portrait with Miltier’s sled dogs, three of which will be racing with Sheley when she goes out for her first sled dog race during the Grand Mesa Summit Challenge Sled Dog Race on Saturday and Sunday, Feb. 27–28.

Whitney is one of 18 sled dogs owned by Jesse Miltier, who has raced with sled dogs for 45 years.

The slower dogs were a good place to start, and the medium-speed team was alright, but Janean Sheley was ready to go faster.

“They absolutely took me for a ride, and it was great! It was all I could do to hang on,” Sheley said.

From the snow-covered beauty of the mountains to the onward rush of the dogs, it was something she had dreamed of, and “it was just awesome,” said the 37-year-old Grand Junction woman.

Back in late December, when Miltier had told her that he could have her mushing in a month or two, “I was nervous to try,” Sheley said. “I kind of took it as a challenge. … it was an opportunity I couldn’t let pass by.”

On Saturday and Sunday, Feb. 27–28, Sheley will participate in her first sled dog race with four of Miltier’s dogs. They will race in a recreational class, 4-mile race as part of the Grand Mesa Summit Challenge Sled Dog Race organized by the Rocky Mountain Sled Dog Club.

The event will include skijoring races as well as sled dog races for teams of four, six or eight dogs in various classes. The event is based in the Mesa Top Trail parking area off Colorado Highway 65 on Grand Mesa.

Miltier, who is a member of the club, has been sled dog racing for 45 years. “Everybody has a passion, and this has just been mine,” he said.

It started when he was in high school in Virginia and got a Siberian Husky named Lavana. “It was an incredible companion dog for me,” he said. “That dog was incredibly smart.”

While training Lavana, he got involved with a dog club and then with sled dog racing, something that followed him as an adult from Virginia to the Grand Valley.

He now has 18 dogs so he can compete in events for four, six and eight sled dog teams, he said.

It was a conversation about dogs that connected Miltier to Sheley last year.

“I go to church with her mom,” Miltier said.

She mentioned that her daughter had a Siberian Husky, which led to Miltier to talk about his dogs — “I had nothing but Siberians for 35 years. Then about 10 years ago I made the gradual transition to Alaskans,” which are a mixed breed with more speed, he said — and why he has so many.

“She told me her daughter had always wanted to dog sled,” Miltier said. So naturally, he said he would be glad to mentor Sheley. It was something he had done before with several local teenagers interested in dog sledding and racing, including his own son, Josh Miltier.

He invited Sheley and her two children, Madyson, 11, and Mason, 13, over to meet his dogs in late December.

“It was just exciting. It was exciting to see them working,” Sheley said.

Prior to that, her experience with sled dogs was a 6-mile sled tour her family had taken in Breckenridge in 2019 as a Christmas gift. It gave all of them, including her husband, Jeremy Sheley, a taste of what it would be like to mush, she said.

Janean Sheley also is a Siberian Husky owner and was interested in the whole experience of training a team and going out with them on a sled.

Until she got Miltier’s offer, however, she wasn’t sure where to start. She needed someone to help her “get my feet wet before I jump all the way in and overcommit,” Sheley said.

For the past couple months, Miltier and Sheley have packed in the sled dog lessons. She has learned the different positions in a team — the leaders, the point dogs, the swing and wheel dogs — how to harness them and how to command them.

“Gee” is right. “Haw” is left.” Go is “Hike!” “On by” directs the team to pass a distraction or other dogs on a trail. And there are a lot of other commands in between, Miltier said.

They take about 10 dogs out at a time to run with his four-wheeler in the desert and Miltier has shown Sheley what to look for as to if a dog is working or not.

A dog’s head should be down, its tail behind it and the tug line tight. If a dog’s head is up and it is looking around or its tail is up, it’s not working, he said.

They talked about how to pair up dogs that will run well together, dog nutrition and paw care. They went over the parts and use of a sled.

“She did those things with me, and she was amazing,” Miltier said. “I only had to tell her once, and she had it.”

Over Valentine’s Day weekend, Miltier took Sheley to the Flat Tops area above New Castle to meet some other sled dog racers and so she could get a taste of mushing on her own.

As a snowboarder, Sheley was ready for the cold, and she was able to transition what she had learned with Miltier in the desert to the snow.

“Matter of fact, I hadn’t been out on that trail in a while and no sooner do you start off and you’re in a downhill with moguls. That would throw me off, and she took in stride,” he said.

However, he didn’t want to take chances and started her out with an older four-dog team and followed her to see how things went. “I noticed she was kicking, we call it peddling,” Miltier said. “She was even running on the uphill.”

“So I progressed her to a medium speed team,” he said.

Sheley continued to do well as they worked on passing and other things. “You know, if you’re really up for it, we’ll go faster,” he told her.

They harnessed his four fastest dogs and Sheley commanded them to go. “You know, my throat, I choked up a little bit because she took off so fast,” he said.

As Sheley and the team went down the moguls “she was going airborne,” he said. “I was, ‘Oh my God, what did I do!’”

Afterward Sheley told him, “I’m a little bit of an adrenaline junky. I really enjoyed it.”

So when it comes to being in her first race during the coming weekend, “she’ll do fine,” he said.

“I’m excited to try it, and we’ll see, maybe I’ll love it,” Sheley said of racing.

Up to this point she had only thought of having sled dogs as a recreational outlet, but she’s enjoyed getting to know Miltier and other sled dog owners and racers he has introduced her to.

“It’s definitely a lifestyle, and one you shouldn’t enter into lightly,” Sheley said. “Maybe it will be something the whole family can get into.”

The Grand Mesa Summit Challenge Sled Dog Race will be Saturday and Sunday, Feb. 27–28, based in the Mesa Top Trail parking lot off Colorado Highway 65 on Grand Mesa.

The races will begin about 8 a.m. and wrap up about 2 p.m. They will include events for dog sled racing teams and skijoring (cross country skiers pulled by dogs).

There will be competitive pro and recreational class races with distances of 4, 6 or 8 miles on groomed trails.

There will be room for spectators with masks and social distancing, said Steve Bethka, president of the Rocky Mountain Sled Dog Club, which is organizing the event.

The parking lot is long and “people can spread out pretty easily up there,” he said.

Bethka recommended spectators leave their dogs at home. The sled dogs participating in the event will be hyped up and eager to race, and the fewer distractions there are in the area the better, he said.

Other than that, dress for snow and cold. There are no indoor facilities at the parking lot.

Bethka expected more than 30 racing teams to compete in the event, some doing more than one race, and will be coming from across Colorado as well as from New Mexico, Montana and other states.

“Most of the racing across the United States has been canceled,” he said. “We’re one of the that is going to get it going.”

For information about the event and the club, go to rmsdc.org.

Ashley Judd gives update on her shattered leg: 'I am in savage agony'

Prince Harry: I have a really good relationship with Queen Elizabeth II