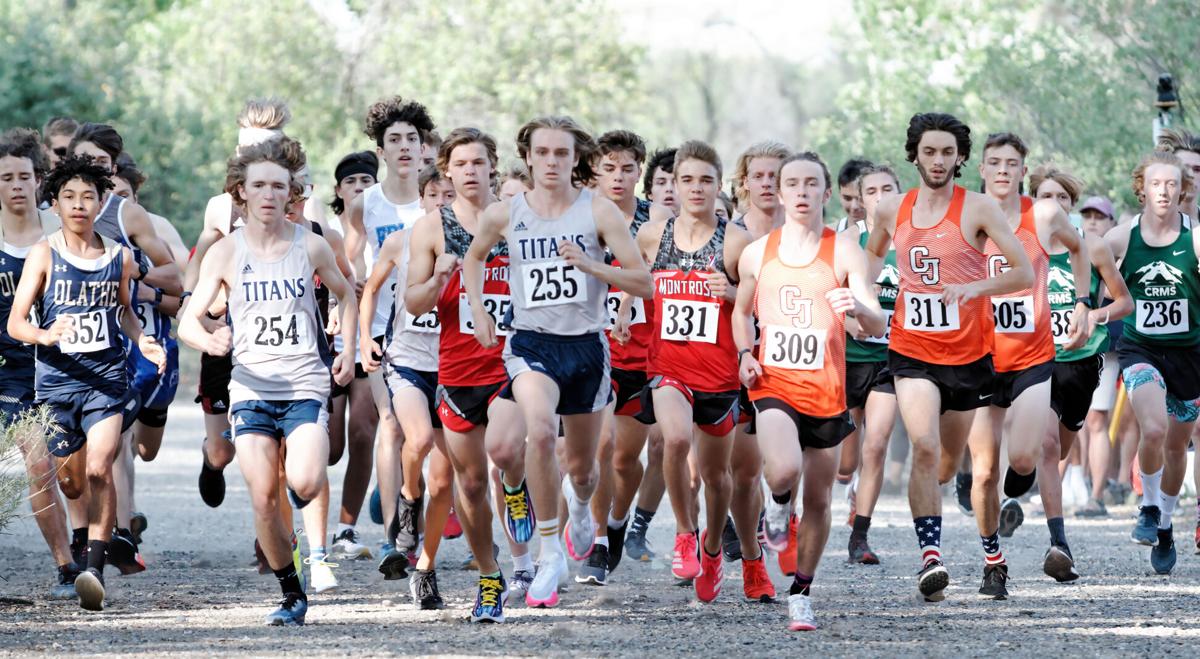 Barton Glasser/Special to The Daily Sentinel 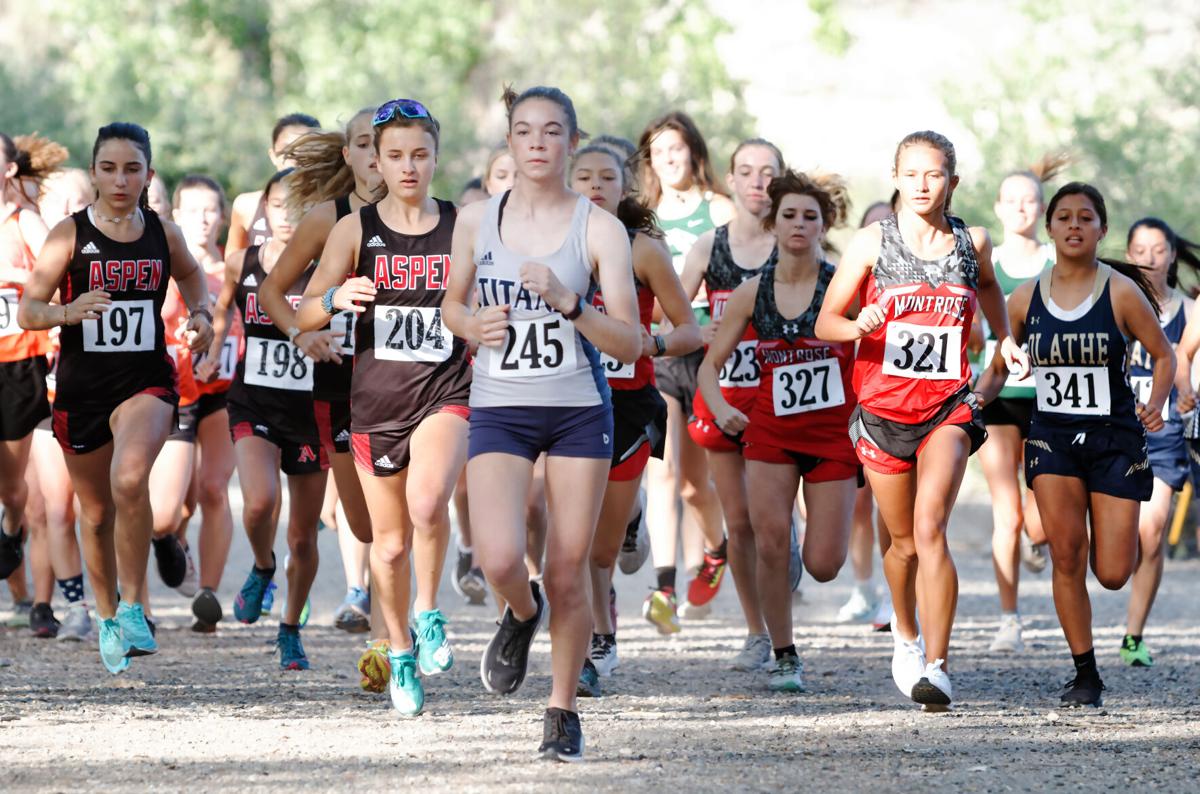 Elsie Weiss, 204, of Aspen and Ruby Pendy, 245, of Crested Butte lead the pack during the Grand Junction Tiger Invitational cross country meet at the Connected Lakes section of the James M. Robb Colorado River State Park in Grand Junction, Colo., Saturday, Sept. 11, 2021. Weiss finished with a time of 19:46.4 and Pendy finished with a time of 20:31.9. Photo by Barton Glasser 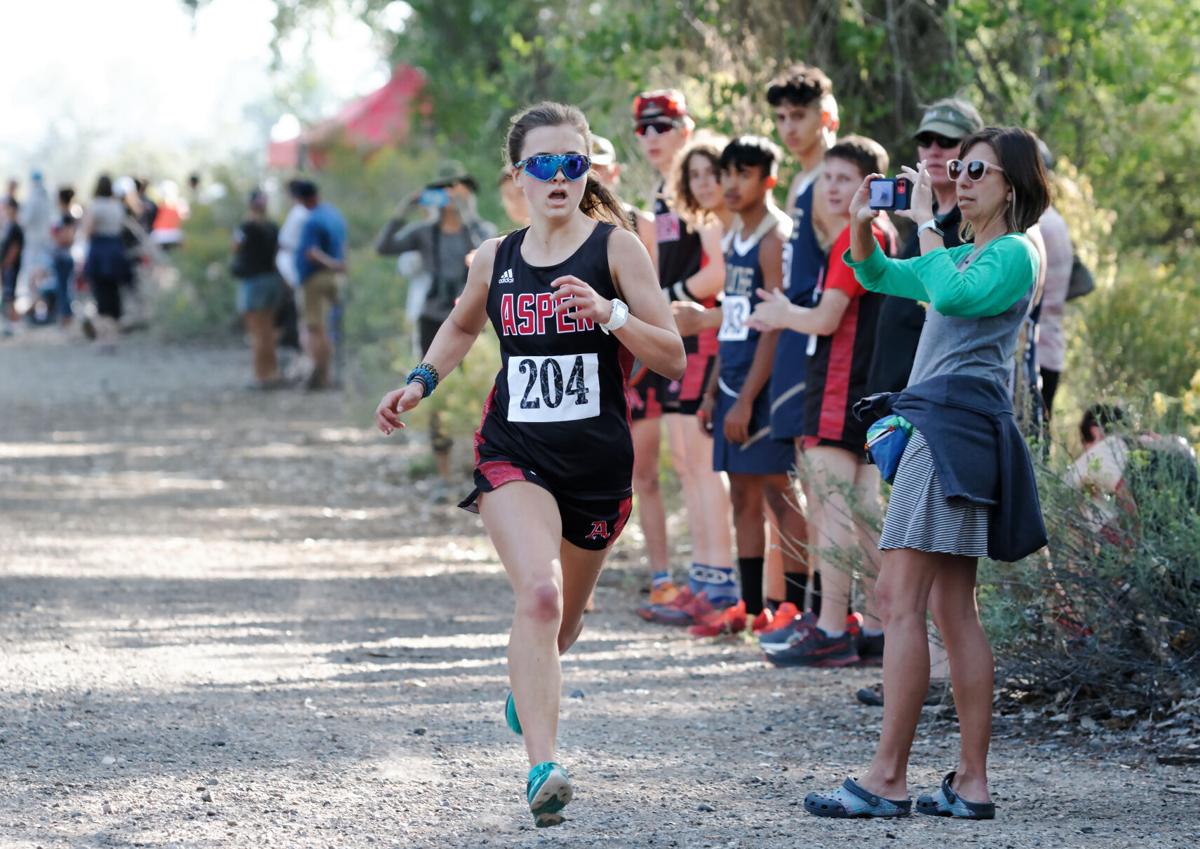 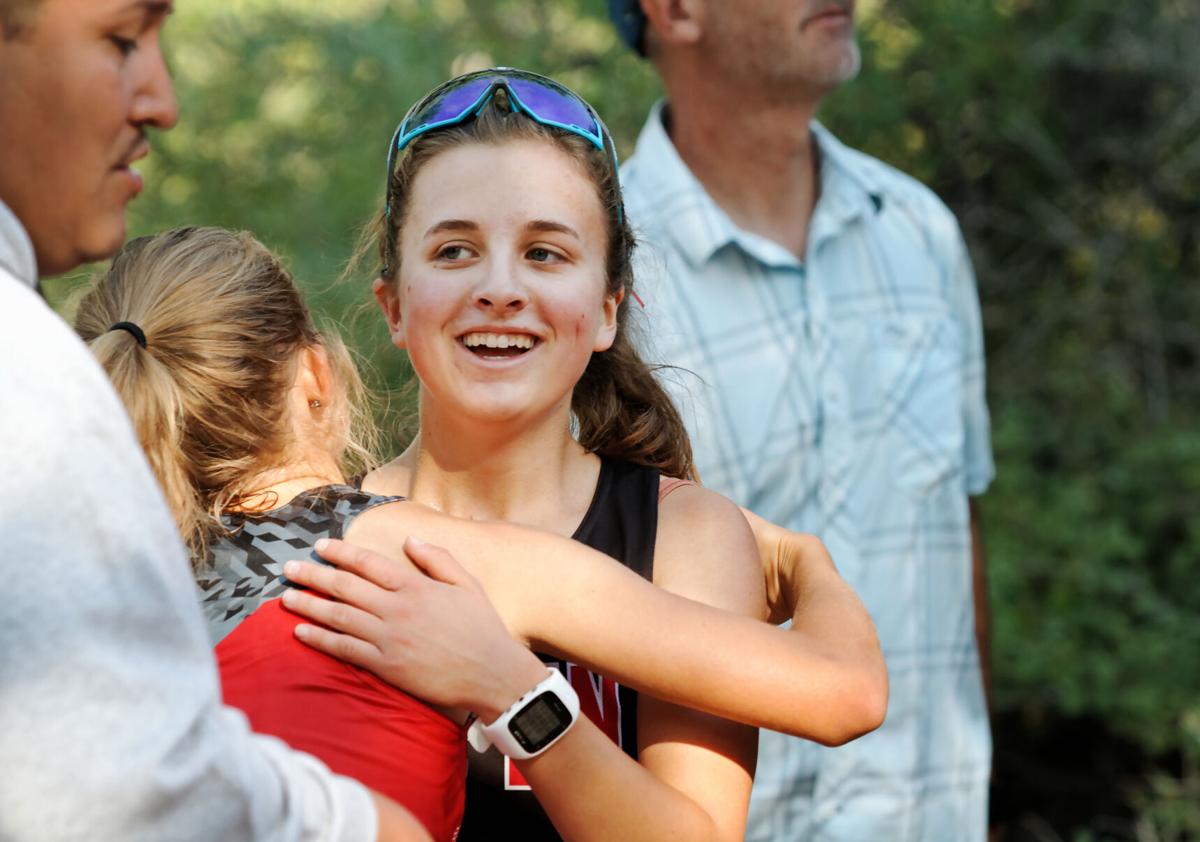 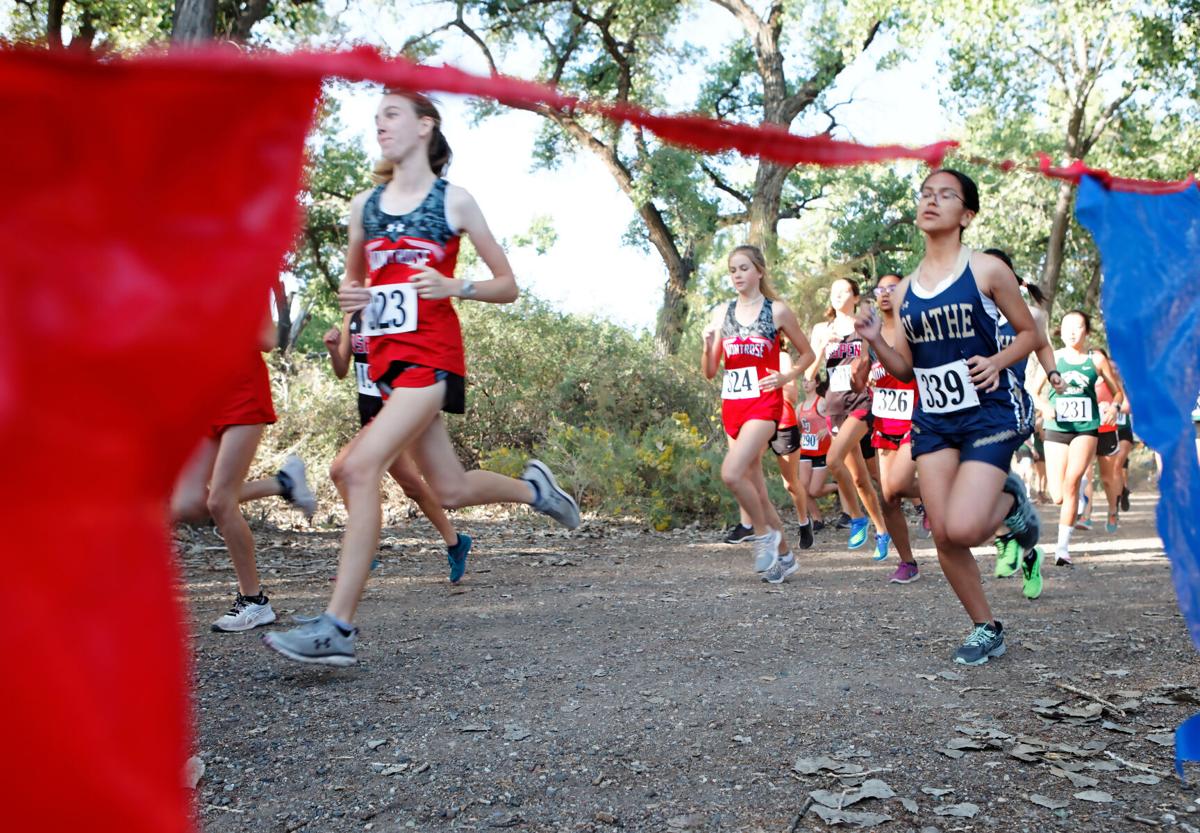 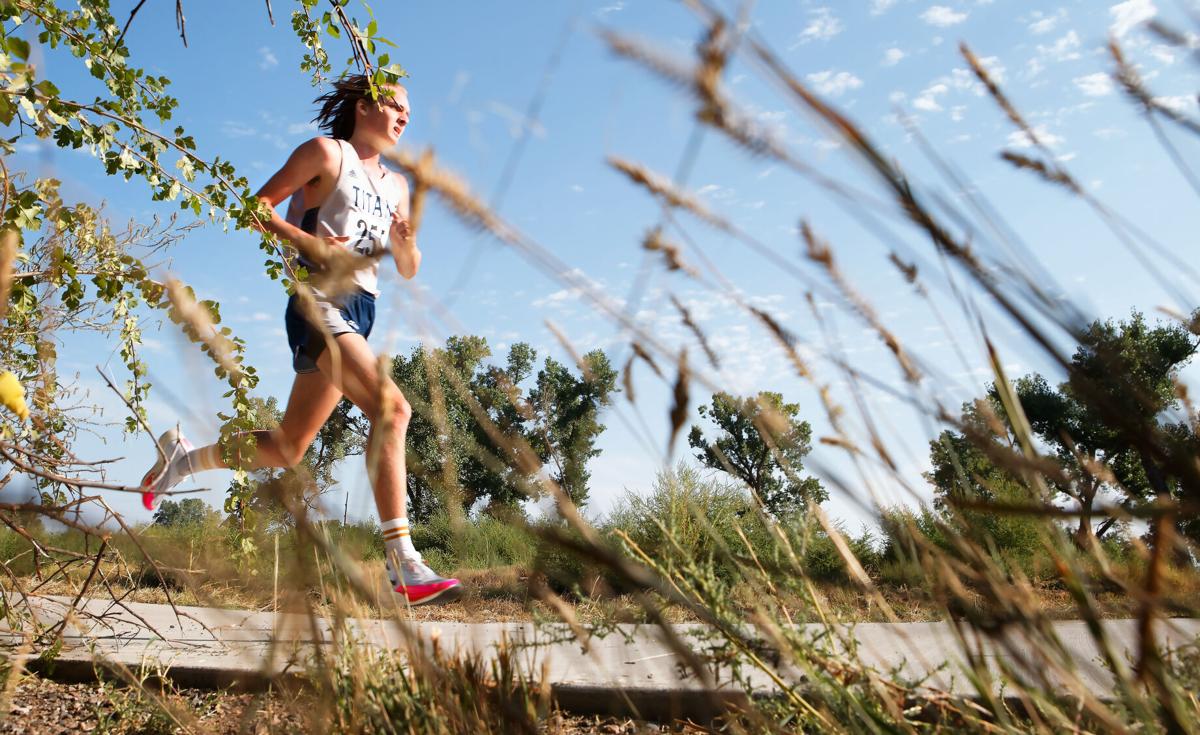 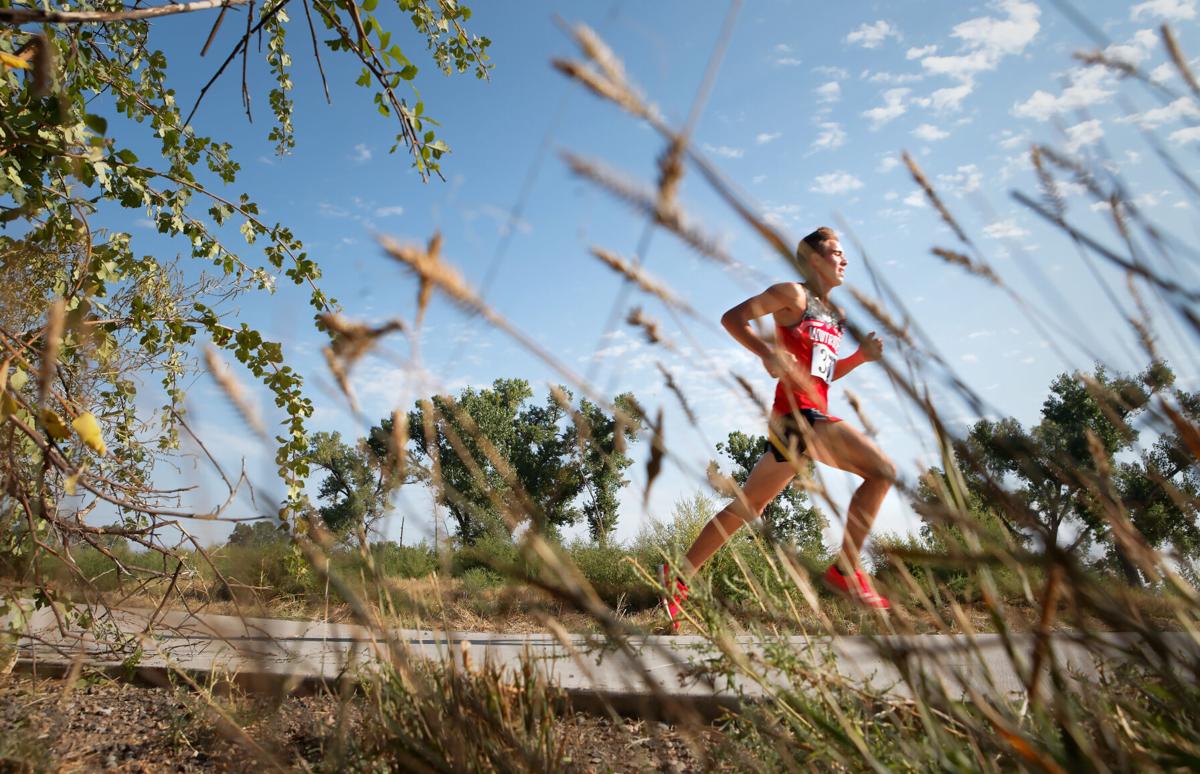 Barton Glasser/Special to The Daily Sentinel

Elsie Weiss, 204, of Aspen and Ruby Pendy, 245, of Crested Butte lead the pack during the Grand Junction Tiger Invitational cross country meet at the Connected Lakes section of the James M. Robb Colorado River State Park in Grand Junction, Colo., Saturday, Sept. 11, 2021. Weiss finished with a time of 19:46.4 and Pendy finished with a time of 20:31.9. Photo by Barton Glasser

Mountain school runners descended on Connected Lakes on Saturday where they promptly ascended to the top of the podium at the Grand Junction Invitational.

Elsie Weiss of Aspen High School won the girls 5K and Connor Williams of Crested Butte topped the boys field on the circuitous cross-country course around the state park in the heart of Grand Junction.

“Coming into this race I just wanted to finish and not pass out,” Williams said.

And he was serious.

“I raced last week at the state course in Colorado Springs, and I actually passed out due to over-hydration,” the Crested Butte senior said. “Not enough electrolytes. The medical people said … I basically drowned myself in a sense.”

Williams said he recovered with additional electrolytes and sodium, enabling him to resume training during the week.

“That’s never happened to me before; I’m a pretty hydrated guy,” said Williams, an experienced track and cross country runner who always totes a giant water bottle. “But I was able to train (this week). I just had to watch my fluids.”

He started with a quick pace, joined by Graff and the Grand Junction duo of Duffy and Flanagan. Soon, he was out front alone.

“After the first mile, I fell asleep because there wasn’t anyone around me. But it was a good tempo,” said Williams, who won a pair of state titles at the 2A state track championships last spring. Williams won the 800-meter dash in 1 minute, 54.2 seconds; and he won the 1,600 title in 4:19.9.

Williams, who finished third in the 2A state cross country meet last fall, hopes to return to the state course in Colorado Springs next month “and not pass out.”

He said he logged significant training miles over the summer, inspired when he would see Crested Butte Olympian Emma Coburn training with the other Team Boss runners.

“I appreciate it a lot. Some people might take it for granted. But getting to watch Olympians train … I’m going to take advantage of that and try to learn from them,” Williams said.

Coburn and fellow Team Boss Olympian Cory McGee inaugurated the new track at Colorado Mesa University in 2020 when Coburn ran the fastest women’s mile ever in the state (4:32).

Weiss, the girls winner Saturday, employed a different cross-training regimen last week as she prepared for the Grand Junction Invitational.

“I went on ex ed last week,” Weiss said of the annual experiential education program at Aspen. “I went backpacking on the Flat Tops.”

Weiss, who won the North Fork Invitational last weekend in Hotchkiss, settled into the lead group at Connected Lakes with Montrose’s Bush and Ruby Pendy of Crested Butte.

“I really enjoyed this race,” Weiss said. “My last two races … I ran on my own the entire way, so it was nice to have people push me along.”

The Aspen junior eventually pulled away from the competition, winning in 19:46.4.

She said she was pleased with her race on a clear day, absent smoky skies.

Likewise, runner-up Bush was happy to have company.

“I love this course from last year,” said Bush, a Montrose sophomore. “… staying with her (Weiss) definitely pushed me. That last half-mile was so hard. But it was amazing.”

Bush, who also plays soccer and basketball at Montrose, thanked Weiss for the quick tempo.

“Whenever you are in a pack like that, it is so much easier mentally and physically,” said Bush, who finished in 20:01.8.

The Montrose girls won with 36 points. Aspen was second with 38.

Scattered thunderstorms during the evening followed by a few showers overnight. Low 58F. Winds ESE at 10 to 15 mph. Chance of rain 50%.

Which story topped the headlines for the week ending September 17th?