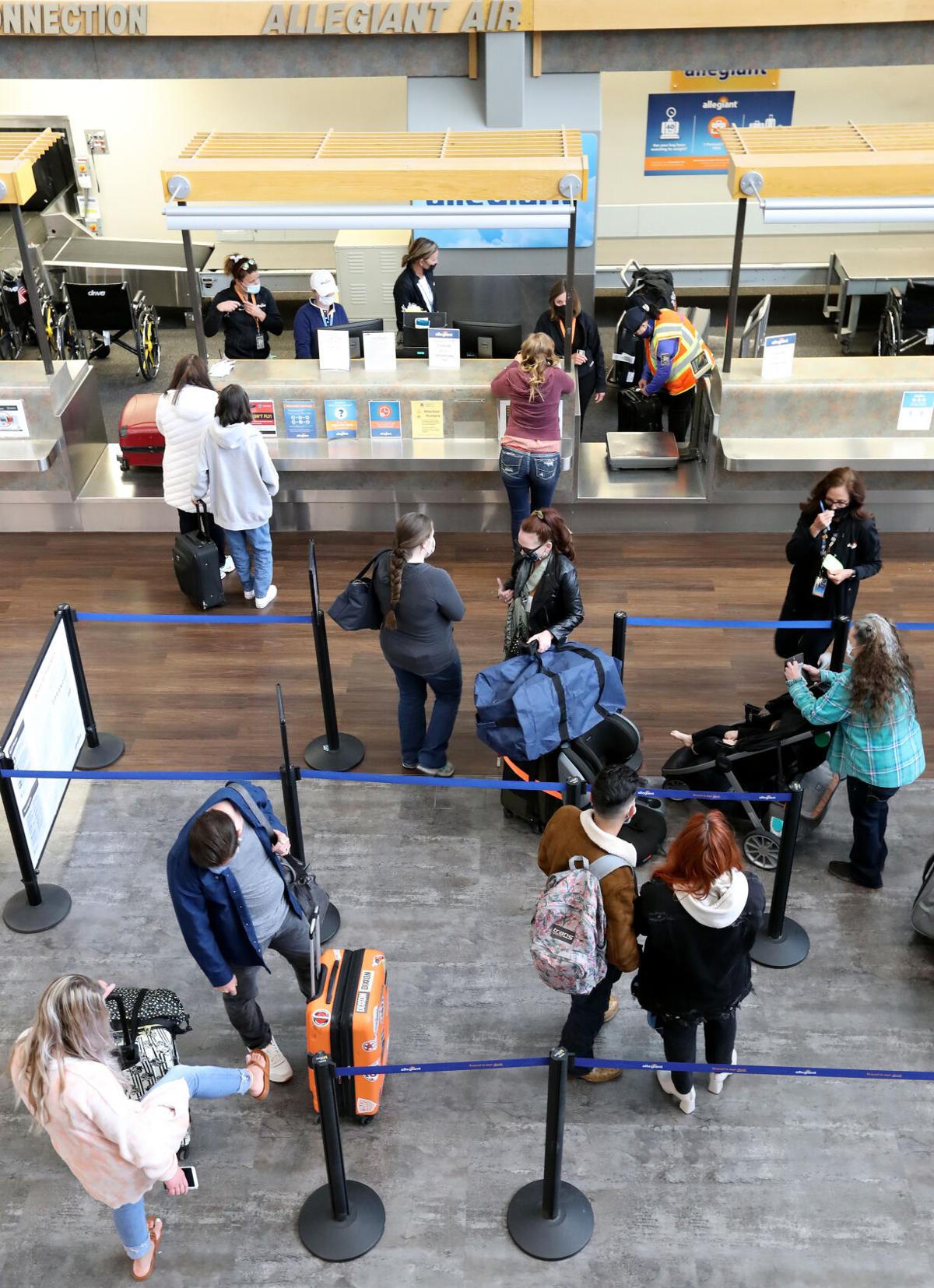 Passengers check in to board the Allegiant flight to Las Vegas from Grand Junction Regional Airport. 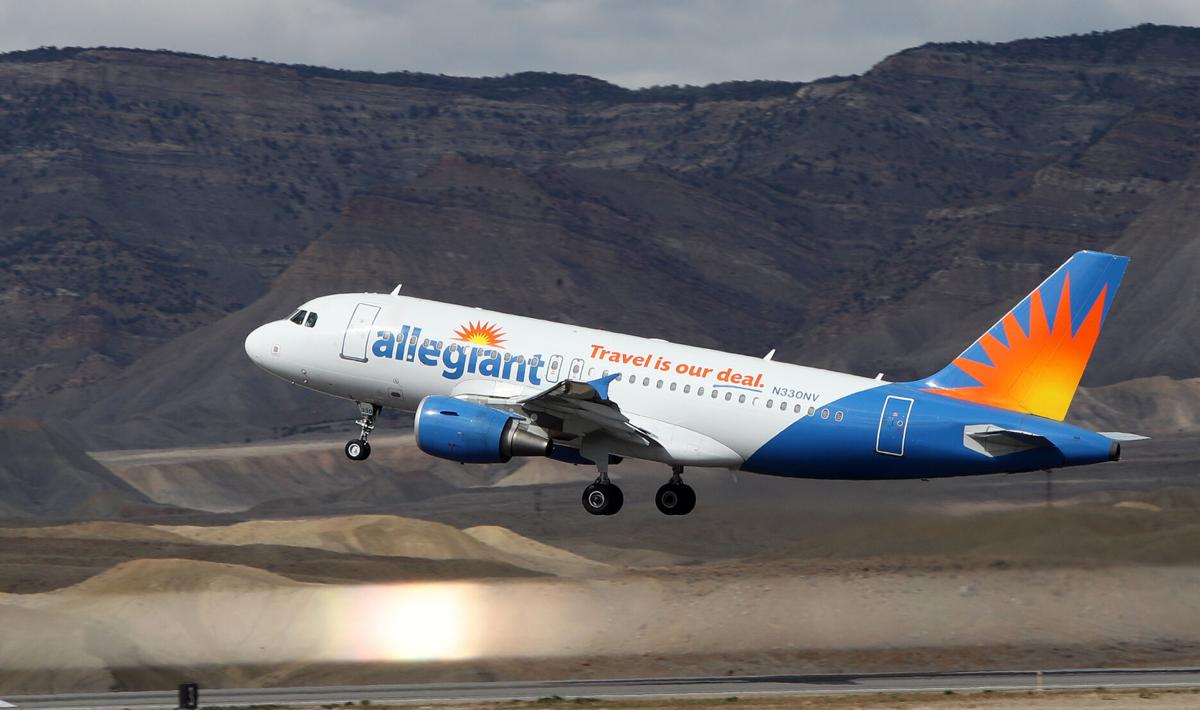 An Allegiant flight takes off from Grand Junction Regional Airport for a flight to Las Vegas. 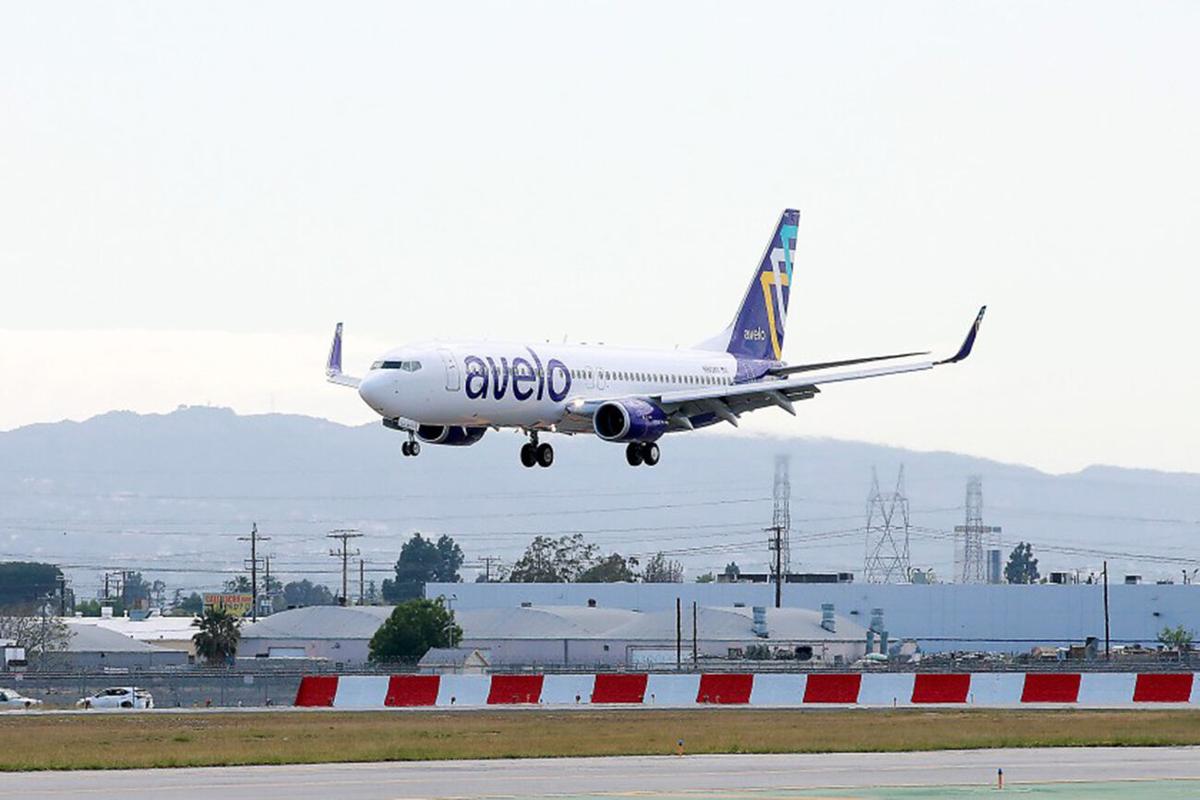 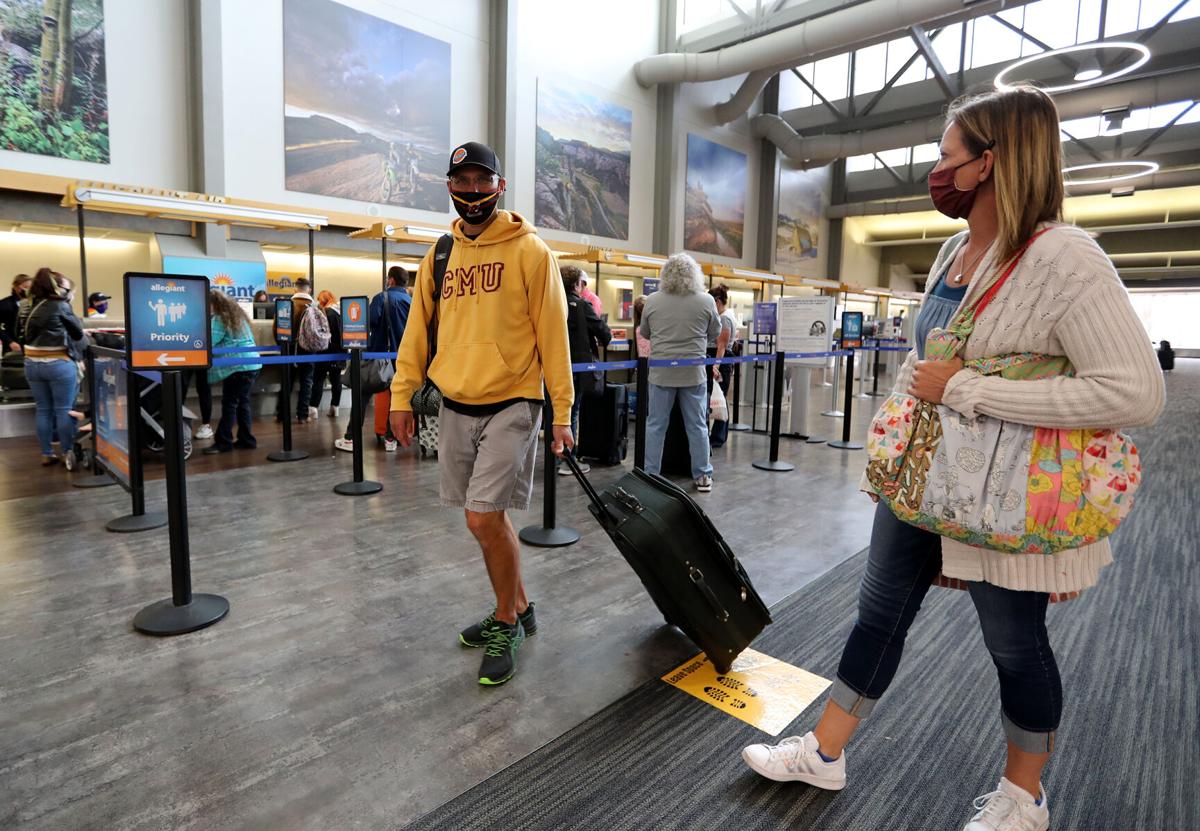 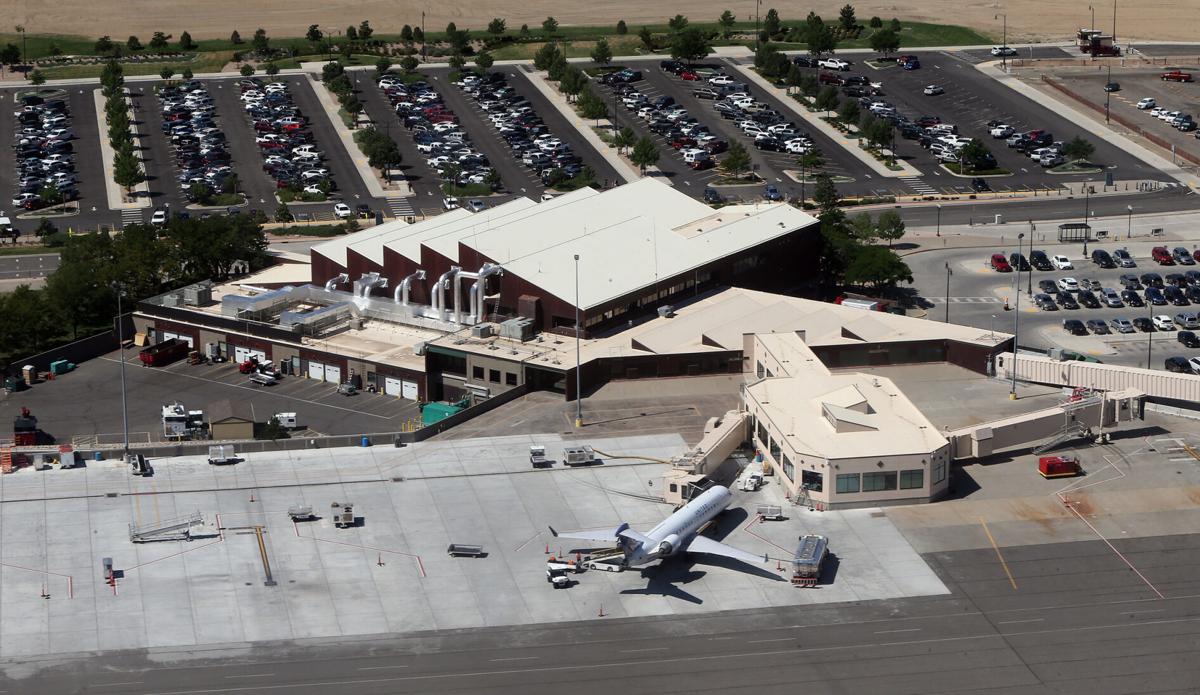 An overhead look at Grand Junction Regional Airport. With the addition of the service of two new airlines, the airport will become the smallest airport in the country, as measured by 2019 passenger data, to be served by six airlines.

Passengers check in to board the Allegiant flight to Las Vegas from Grand Junction Regional Airport.

An Allegiant flight takes off from Grand Junction Regional Airport for a flight to Las Vegas.

An overhead look at Grand Junction Regional Airport. With the addition of the service of two new airlines, the airport will become the smallest airport in the country, as measured by 2019 passenger data, to be served by six airlines.

More than a year into this whole pandemic thing, the air-travel industry is moving past the worst of the impacts of the public largely staying home, and looking at how to best cater to the shifting motivations people have these days for wanting to fly.

Those are trends playing out at the Grand Junction Regional Airport as it welcomes new airlines and flights following some dark days in 2020 and looks to a summer that may be busier than ever thanks in part to a pent-up desire by many to fly. At the same time, questions remain about what lingering negative impacts COVID-19 may have on the industry, including locally at the airport.

“The airline industry over the last year has been turned upside-down completely,” said Kent Myers, an Eagle County resident who runs an air service consulting firm that works to help smaller airports develop and maintain their commercial air service.

“What’s really kind of changed fundamentally is that leisure travel, which has always taken a back seat to business travel and corporate travel, is now (for the industry) kind of like, ‘wow, these people want to live in smaller communities with natural social distancing with a lot of things to do outdoors, and they want to get out of the cities, and now we’ve got to think about leisure markets,’” Myers said.

He added that “business travel is the one that is the big unknown right now, even going forward.”

Myers has watched how COVID-19 has transformed how both he and his adult children work these days. They all flew regularly in their jobs until the pandemic changed that, and it’s unclear to what degree they, and other business people, still will travel for work now that online meetings on platforms like Zoom have proven to be a viable alternative.

“The airlines are kind of stuck and saying to themselves, what’s the future look like and how is it going to kind of pan out between this leisure market and the business market,” Myers said.

Recent developments at the Grand Junction Regional Airport reflect travel trends. When Frontier Airlines this week announced it would be offering flights starting in June from Grand Junction to Denver and Durango to Denver, and also between Denver and airports in Montana and Alaska, Frontier officials highlighted how the flights would allow people to more easily visit friends and family, and support tourism and the desire of people to work remotely from scenic locales.

Josh Flyr, Frontier’s vice president of network and operational design, told The Daily Sentinel, “I think as people are coming back into the market and are ready to travel again they’re looking for a certain type of experience and we think Grand Junction and these other spots fit that bill really well.”

Frontier plans to fly three times a week between Grand Junction and Denver starting in June.

Earlier this month, new airline Avelo announced direct flights four days a week between Grand Junction and Hollywood Burbank Airport in California, starting May 9. Avelo founder Andrew Levy told the Sentinel at the time of the announcement that with COVID-19 vaccinations increasing, Avelo is going to be ready to respond to a pent-up demand by the public to travel.

Angela Padalecki, executive director of the Grand Junction airport, has cited the value of the airport’s proximity to national parks in the region, pointing to the strong visitation those parks saw last year even with the pandemic.

“That presents incredible opportunities for airlines and that’s certainly contributing to the growth we’re seeing and the timing of it, to catch that pent-up demand and help people take those trips they’ve been dreaming about,” she said.

The Grand Junction airport currently is served by four other airlines — United, American, Delta and Allegiant. With the Frontier and Avelo announcements, it will become the smallest airport in the country, as measured by 2019 passenger data, to be served by six airlines, Padalecki says. It also will be the smallest served by three ultra-low-cost airlines, with Frontier, Avelo and Allegiant falling into that category.

Padalecki notes that an average of more than 18 commercial flights a day are scheduled at the airport come June, compared to an average of 14 in the summer of 2019, previously the busiest summer at the airport. That would mark a resounding comeback for a facility that saw passenger numbers fall 95% a year ago, and has partly recovered since then, with current numbers down 30%.

But some question marks remain for the facility, as for other airports, when it comes to pandemic-related trends, such as what the future holds for business travel. Notably, Denver Air Connection, which ran twice-a-day charter flights between Grand Junction and Centennial Airport in the Denver area, suspended those flights in March 2020, and they remain suspended.

“They hope to resume service as demand resumes,” and the airport hopes that will happen soon, Padalecki said.

She said that flight’s primary customers were business travelers, and that segment hasn’t recovered nearly as quickly as leisure travel.

Motis said the cargo division of the company, doing business as Key Lime Air, will continue to serve Grand Junction.

The situation with Denver Air Connection points to the larger uncertainties in store for the air travel industry, and airports like Grand Junction’s.

She said it is still to be determined where people will be working, and if they’re working remotely, where and how much they will need to travel for work.

As Myers watches his own adult children consider the idea of moving back home because they’ve realized they can work from anywhere, he envisions a lot of people doing the same and looking at places such as Grand Junction as possible places to live due to factors such as good weather, relatively affordable housing and access to outdoor recreation. He said as people who don’t need to work at an office move to Grand Junction, “that will help the airport because that’s 50, 100, a thousand more people living in the community; they’re professionals and from time to time they’ve got to get on an airplane.”

A FREQUENT FLIER’S EXPERIENCEShawn Rash is president and a founding partner of Ally Energy Solutions, which works on energy conservation projects with a focus on renewable energy and has an office in Grand Junction. The company’s employees do a lot of flying, and Rash said he moved to the area five years ago and it was nice to have air service to the places the local airport serves.

“The more it grows, the better. It makes it more convenient,” he said.

He likes that the airport is smaller, with less time spent in security lines. And he said that with the company doing a lot of work in California, it’s nice to have more direct flights there.

But he added, “We need Denver Air Connection back. That was so convenient.”

He said with United having cut back its flights to Denver from Grand Junction, it at times has charged a lot more for tickets because the demand for available tickets has been strong. He said that two weeks ago he paid $1,600 for round-trip tickets to Denver on United, whereas Denver Air Connection charged about $350.

Rash said he had someone traveling to Grand Junction from Denver this week who took a Southwest Airlines flight to Montrose and rented a car because it was still cheaper than flying United to Grand Junction.

When the pandemic hit, United reduced its flights to Denver from Grand Junction to one a day, down from six, even briefly including a stopover in Montrose. Padalecki said it’s currently flying to Denver three times a day from Grand Junction, seven days a week. The airport anticipates United returning to six daily flights in June based on its currently published schedule, although the timing might be affected by gate access as Denver International Airport does construction work that will result in a lot of new gates for United, but likely not until later in the year, she said.

Also this summer, United is bringing back its flight from Grand Junction to Chicago, which it launched in 2019 but suspended last year with the pandemic. Padalecki said the 2019 flight was only on Saturdays but this year United will be flying the route on Sundays as well, which is the kind of growth the airport likes to see.

Rash hadn’t been aware of Frontier’s new service to Denver until speaking to a reporter Thursday, and while excited to learn about it he was interested in whether it would be daily. He said consistent, daily flights make a difference for business travelers trying to get in and out of locations.

Flyr said Frontier believes the current three-day-a-week service planned for Grand Junction matches the current opportunity that exists, but is “always open to be surprised on the upside” and will respond to service demand as warranted.

As for what the Grand Junction airport offers in general, Rash said, “We like the routes for sure out of here. They’re convenient.”

Robin Brown, executive director of the Grand Junction Economic Partnership, said the airport is its own local economic driver, letting businesspeople travel around the world and compete on a global scale.

“Without a doubt I hear from more business owners how great the opportunities are to get in and out of Grand Junction. You have a small-town quality of life but can get where you need to go pretty easily with lots of options,” she said.

Brown thinks the disruption the pandemic caused to the industry resulted in at least one silver lining for local air service. She said that previously she was told that low-cost carriers wouldn’t come to Grand Junction, but now three will be flying here.

Myers said he hopes the airport is successful in its efforts to grow, “because if they are it’s better for the community. You have better health care, you have better teachers, there are more professionals.

“It’s an economic machine for the community and the region.”