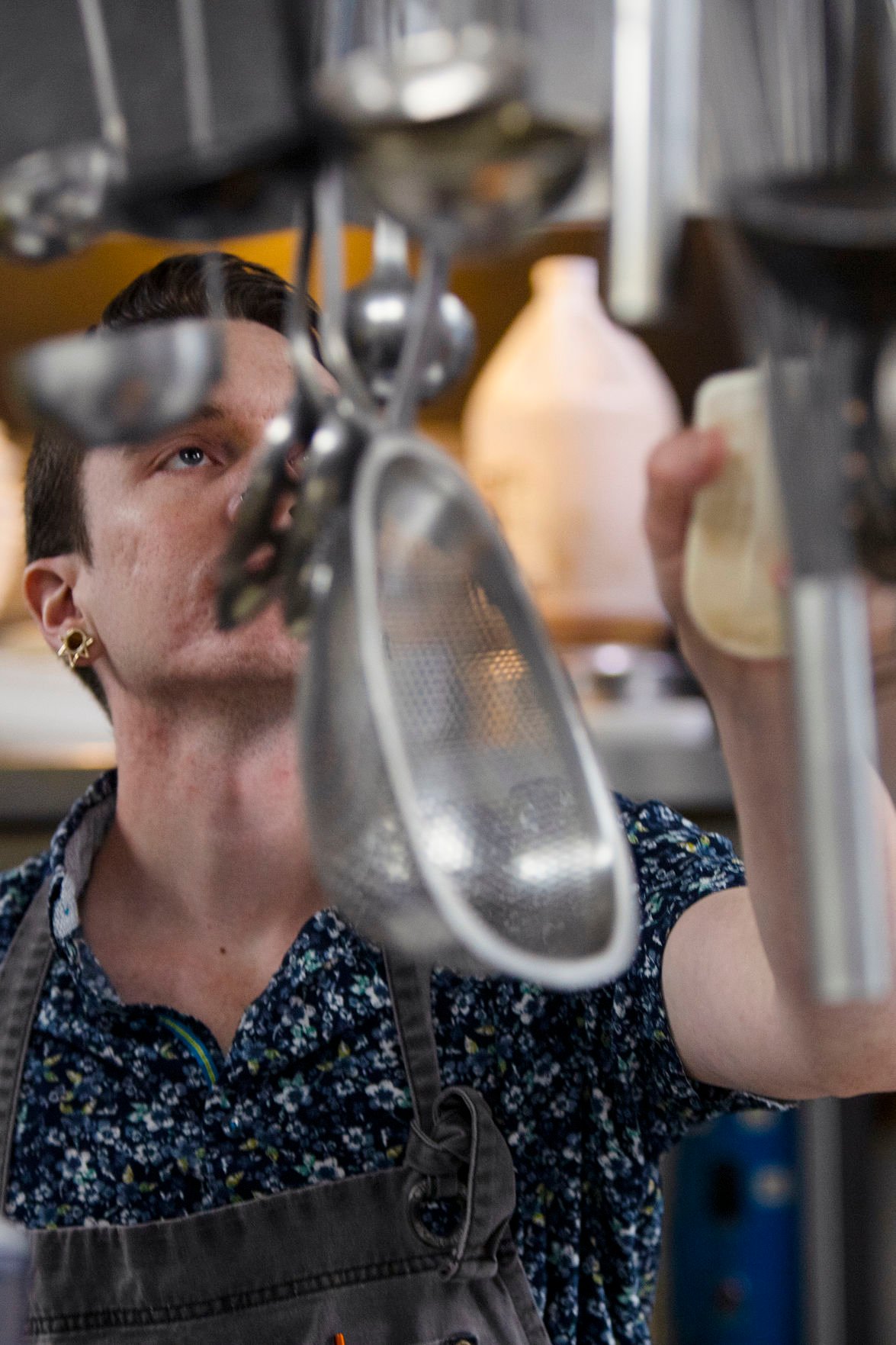 626 on Rood kitchen coordinator Josh Townsley grabs a spatula as he preps for dinner service on Jan. 10. On top of working in the kitchen, Townsley talks with guests in the dining room about the dishes. 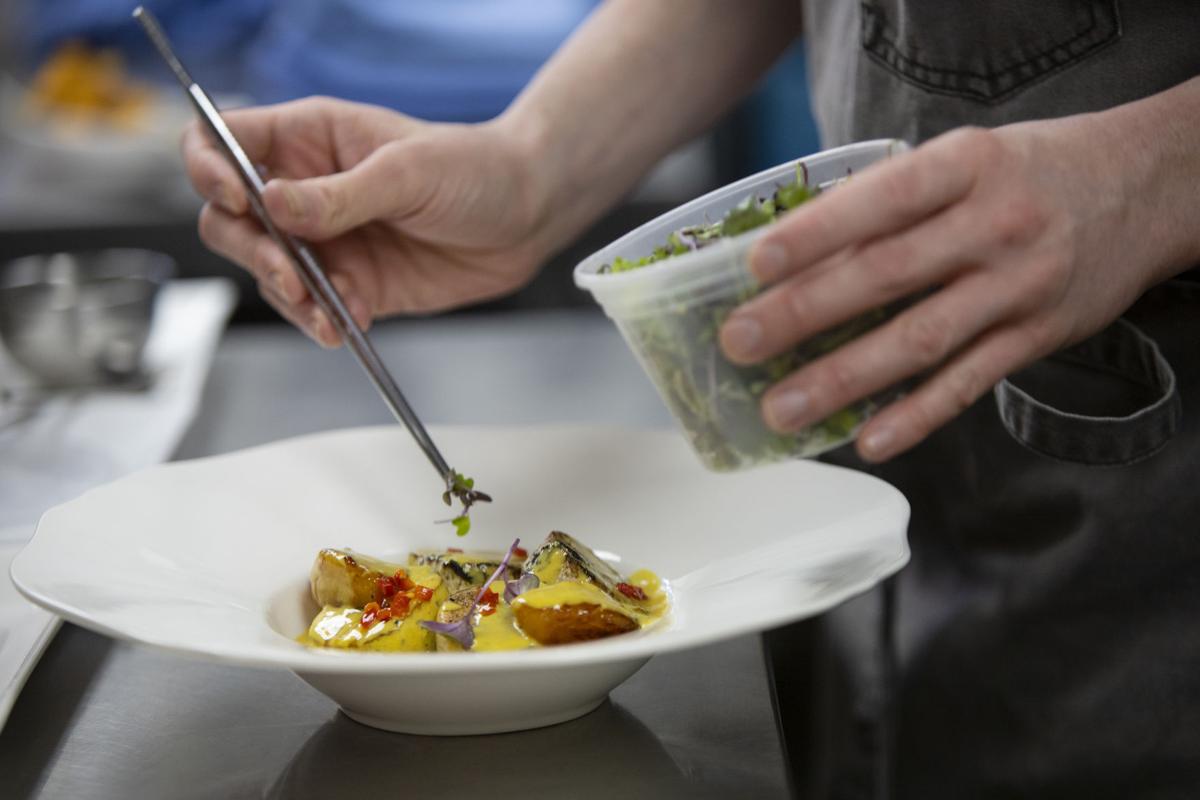 Kitchen coordinator Josh Townsley at 626 on Rood garnishes a vegan spiced peaches and tofu “scallops” dish with microgreens on Jan. 10. Townsley is one of many back-of-house employees who have benefited from the rise in minimum wage. 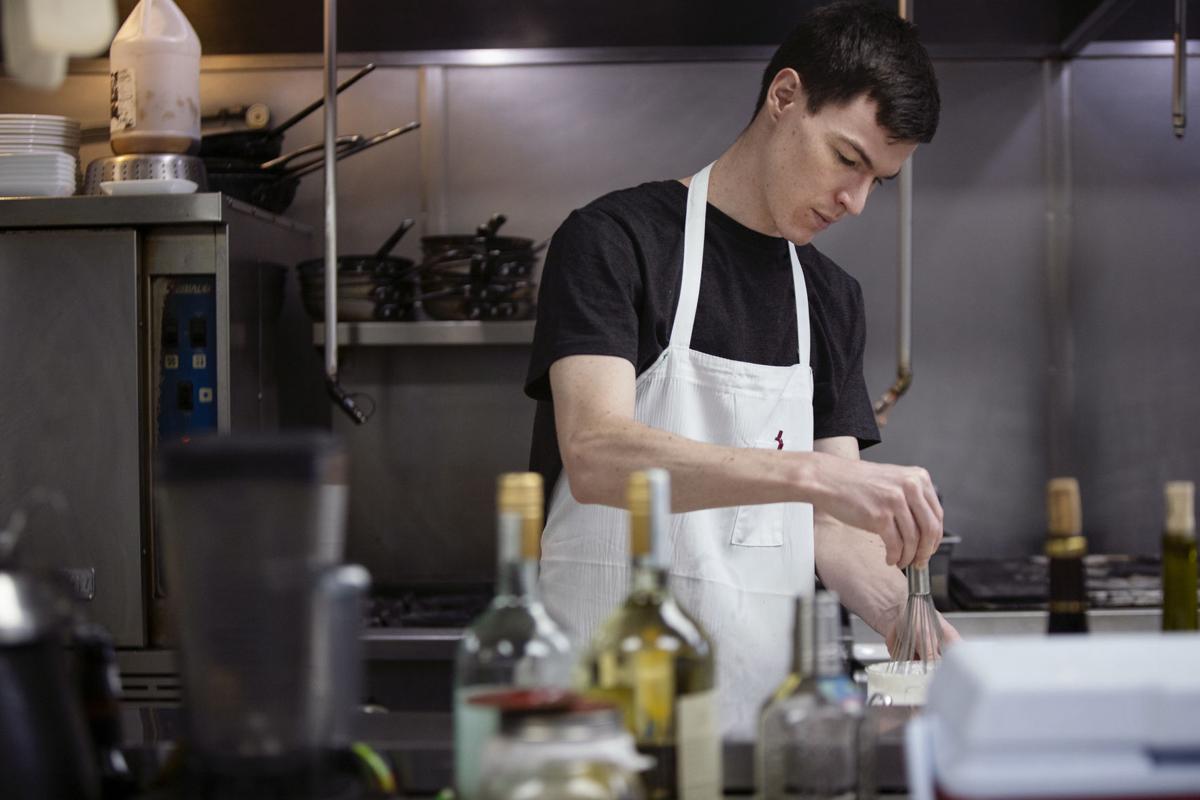 At the restaurant 626 on Rood, line cook Garrick Cain preps for dinner service in the kitchen. Because of the rise in minimum wage over the past four years, the restaurant has gotten creative in the way it distributes tips among employees.

626 on Rood kitchen coordinator Josh Townsley grabs a spatula as he preps for dinner service on Jan. 10. On top of working in the kitchen, Townsley talks with guests in the dining room about the dishes.

Kitchen coordinator Josh Townsley at 626 on Rood garnishes a vegan spiced peaches and tofu “scallops” dish with microgreens on Jan. 10. Townsley is one of many back-of-house employees who have benefited from the rise in minimum wage.

At the restaurant 626 on Rood, line cook Garrick Cain preps for dinner service in the kitchen. Because of the rise in minimum wage over the past four years, the restaurant has gotten creative in the way it distributes tips among employees.

Theo Otte had to get creative the past four years as his staffing costs climbed $17,000 to $18,000 annually with the rise in Colorado’s minimum wage.

Thanks to the passage of Amendment 70 in 2016, Colorado’s minimum wage has risen from $8.31 an hour in 2016 to $12 an hour as of Jan. 1. Tipped employees had their wages climb from $5.29 to $8.98 over the same period, raising the pay for most front-of-house employees such as those at Otte’s 626 on Rood, a fine dining restaurant in downtown Grand Junction.

The minimum wage will continue to increase annually for cost-of-living increases measured by the Consumer Price Index, and its impact is being felt in Mesa County by businesses such as Otte’s.

The pay raises for front-of-house staff, including waiters, hosts and bussers left Otte, chef and co-owner of the restaurant, wanting to help the cooks and dishwashers who don’t receive tips, but either made the minimum or just above the rate for non-tipped employees.

Two years ago, the restaurant added 2% to each bill to go toward back-of-house workers, something that he had seen some other restaurants attempt. Otte got some pushback from customers, but said most didn’t seem to mind. However, with 90-cent annual climbs up to $12 an hour mandated in Amendment 70 now complete, management had another plan.

The restaurant increased pay for all employees to at least $12 an hour, and servers will share 25% of tips with back-of-house workers. As of Jan. 1, the 2% surcharge is gone.

“In the old system, people in the back couldn’t get anything unless servers voluntarily shared,” Otte said.

Even with increased salaries, Otte said the books look good for 2020 without really raising menu prices. But with about 20 employees, he recognizes that larger businesses likely have felt a greater impact.

He also feels that bumping his wait staff up to $12 an hour will help retain them in Grand Junction, particularly if they have an opportunity in Denver where the minimum wage in the city will increase to $15.87 by 2022. Tipped workers will be making $12.85 by that time.

The minimum increases have had an effect on local businesses that pay some workers that wage, particularly restaurants, which operate on thin profit margins.

“The way the restaurant model is, it’s the same if you’re fine dining or a diner or whatever, profits are slim, wages are slim,” Otte said. “Chains and independents all have had impacts and had to rethink things every year.”

At Hilltop Community Resources, a Grand Junction-based nonprofit that offers a variety of services for adults, families and seniors, CEO Mike Stahl says the raise in minimum wage has brought good things for employees and challenges for the operation.

Hilltop employs about 580 people, many of whom work in personal caregiving in senior living facilities, other care programs, or in food service. Prior to minimum wage bumps, those workers often made $10 to $12 an hour. Now, they are making $12 to $14 an hour.

Stahl said the pay bumps have been a great help to the employees.

“It’s really exciting to see that and the benefit to folks,” Stahl said.

But on the business side, Stahl said the minimum wage bumps have raised the payroll more than $1.5 million over the four years, not including those employees who got a raise who were making slightly more than the minimum to create separation.

“Running a business, it has been an ongoing challenge,” Stahl said. “There are some very difficult decisions having to be made.”

The past two pay increases in particular were noticeable, Stahl said, as Hilltop is not able to easily access new revenue because some of its funding sources are grants, state contracts and donations.

As a result, the organization fast-tracked some expansion projects in hopes of bringing in more money, while putting some other projects on the back burner.

The big jumps are past for now, but Stahl is curious to see how the cost-of-living increases impact the wage moving forward.

“I don’t know if all the head scratching and figuring out is done yet,” he said. “Overall, where we’re at now, it’s nice to get through the largest jumps.”

For Nina Anderson, owner of the staffing agency Express Employment Professionals, the first years of the increase were the most difficult to navigate. When approaching $12 an hour at the start of the year, she said only about 20 of the 200 workers the organization placed with companies were affected by the increase.

“The initial impact was time to adjust budgets and internal costs,” Anderson said. “Businesses passed increased costs to their customers. After that was done, there’s not much negative impact on who we’re placing.”

In Mesa County and across the state, average wages have climbed since the recovery from the Great Recession. In Mesa County, wages just started to climb again with the average wage at just over $43,000 per year, about $14,000 below the state median, according to the Colorado Office of Economic Development and International Trade.

Chris Stiffler, a senior economist with the Colorado Fiscal Institute, said wages have particularly grown in the bottom quarter of wage groups. About a quarter of the jobs in Colorado in 2018 were considered low-wage jobs, according to a CFI report. A low-wage job is considered one that pays less than $13.20 an hour.

The increase brings the Colorado minimum up to the buying power it had through much of the 1970s, Stifler said.

The increase was felt the most in the restaurant industry, Stifler said, as menu prices rose a little higher than the average inflation.

In a typical year, he said menu prices will increase 2.5%, but as minimum wage increased, prices went up around 4.5%.

“That burger costs you a little more,” he said.

Whether those overall increases are a result of minimum wage or a good economy with a low unemployment rate are not overtly clear.

At the same time, she’s also seen employers struggling to make ends meet cut back on things such as health care.

“We’ve seen wages go up in Mesa County and will continue to see that,” she said. “But at the same time, we might see a cutback on health care or employees picking up more of their benefits.”

Charles Brennan, research and policy analyst with the Colorado Center for Law and Policy, said he wasn’t sure how much the minimum wage increased overall wages, but he believes it has had a positive impact overall.

The organization was one of the main champions for the minimum wage increase.

“I’m not sure how much is due to minimum wage, but after long stagnation in wages, locally and nationally, wages are rising,” he said. “By paying higher wage, it’s positive in terms of trying to address issues with poverty and raising people above poverty.”

Now that cities can set their own minimum wage, he also expects some to follow Denver’s lead and set their own. He believes resort towns such as Aspen, Vail and Telluride will seriously look at setting a rate.'

EDITOR'S NOTE: This story has been updated to omit bartenders from a list of non-tipped employees at 626 on Rood. It was also updated to correct a typographical error regarding the tipped employee minimum wage in 2022.

State minimum wage increases in Colorado since the passage of Amendment 70 in 2016.