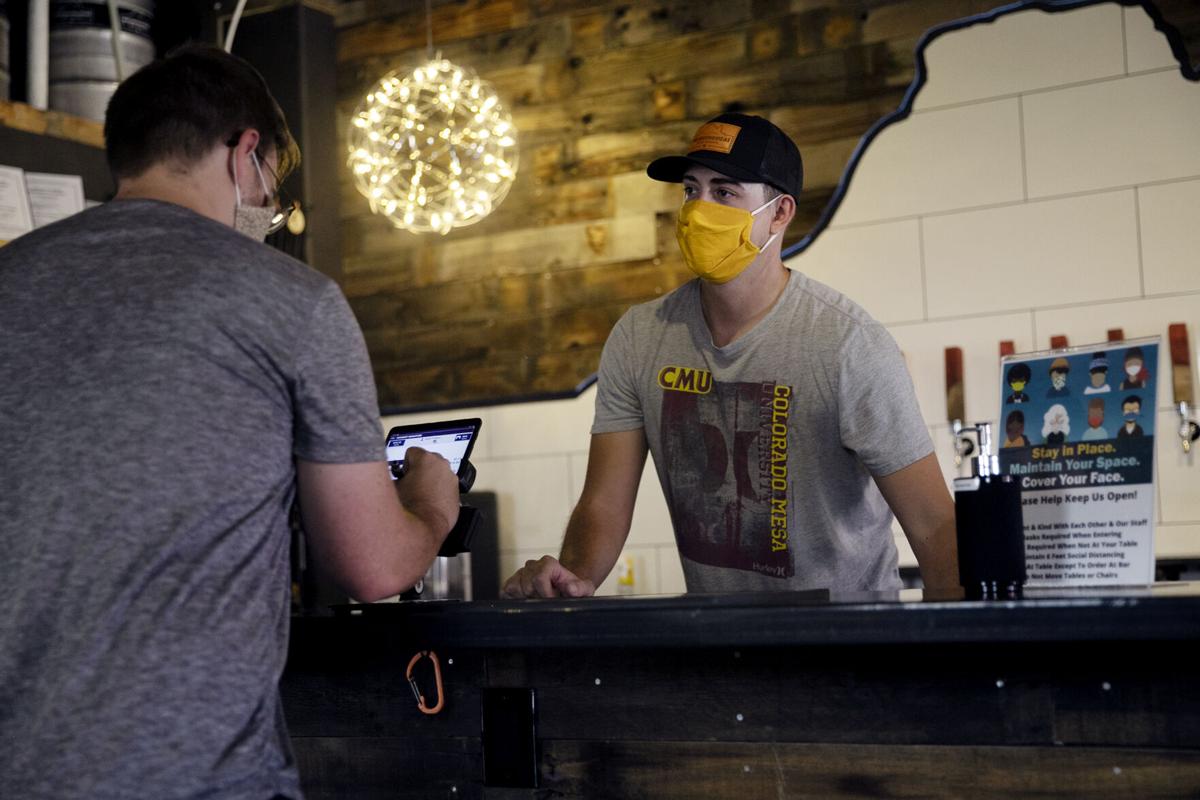 Ryan Shearer cashes out a customer during his lunch shift. 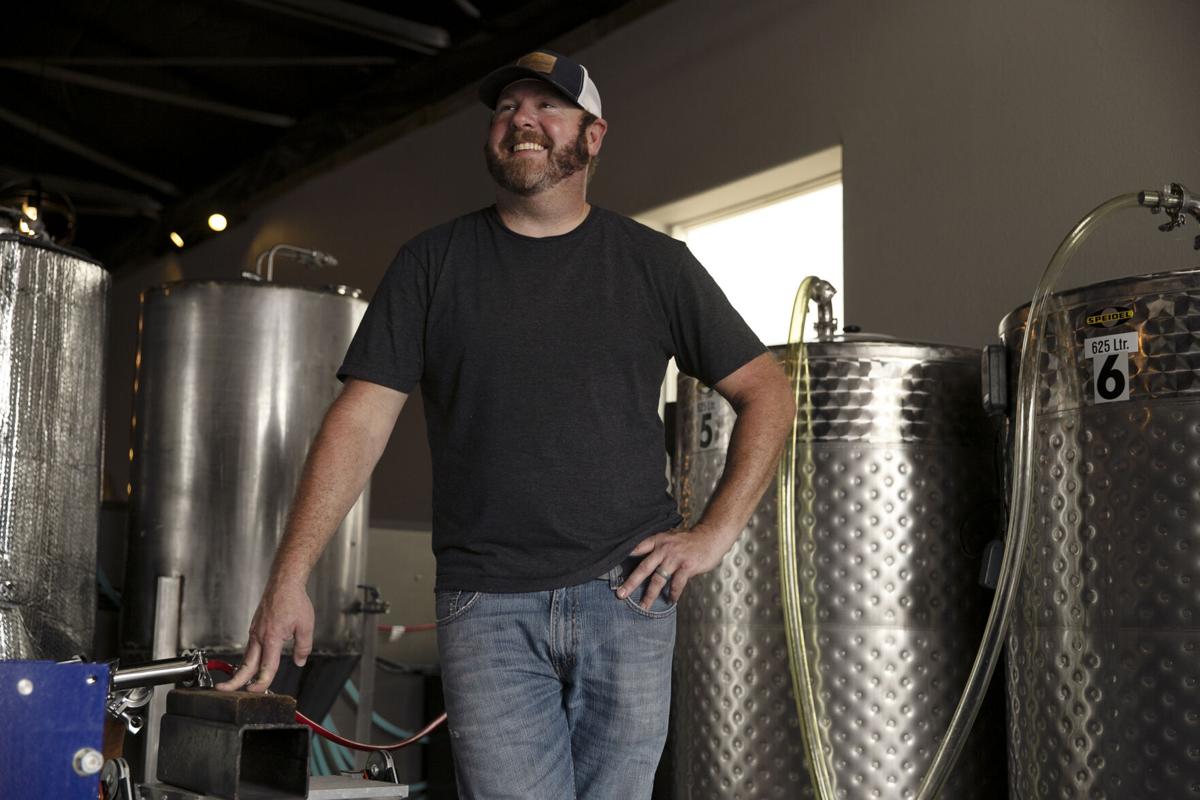 Brian Fischer, co-owner of Monumental Beer Works, 2575 U.S. Highway 6&50, says looking back from the relative safety of six months, he thinks perhaps it helped that Monumental was new when COVID-19 shut down many businesses in mid-March. 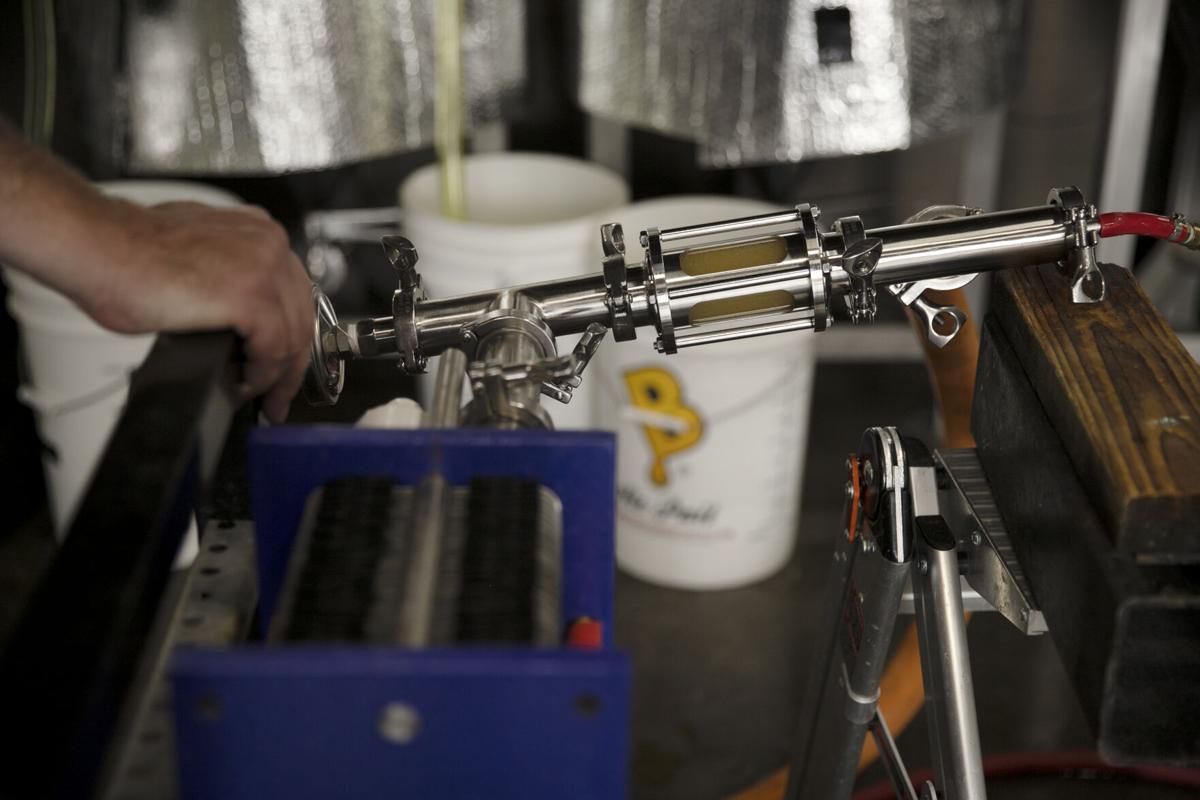 Monumental Beer Works’ latest beer, titled Smoke, in the brewing process. Here, the wort is transferred through a plate chiller into a fermenter for the final stages of the brew process. 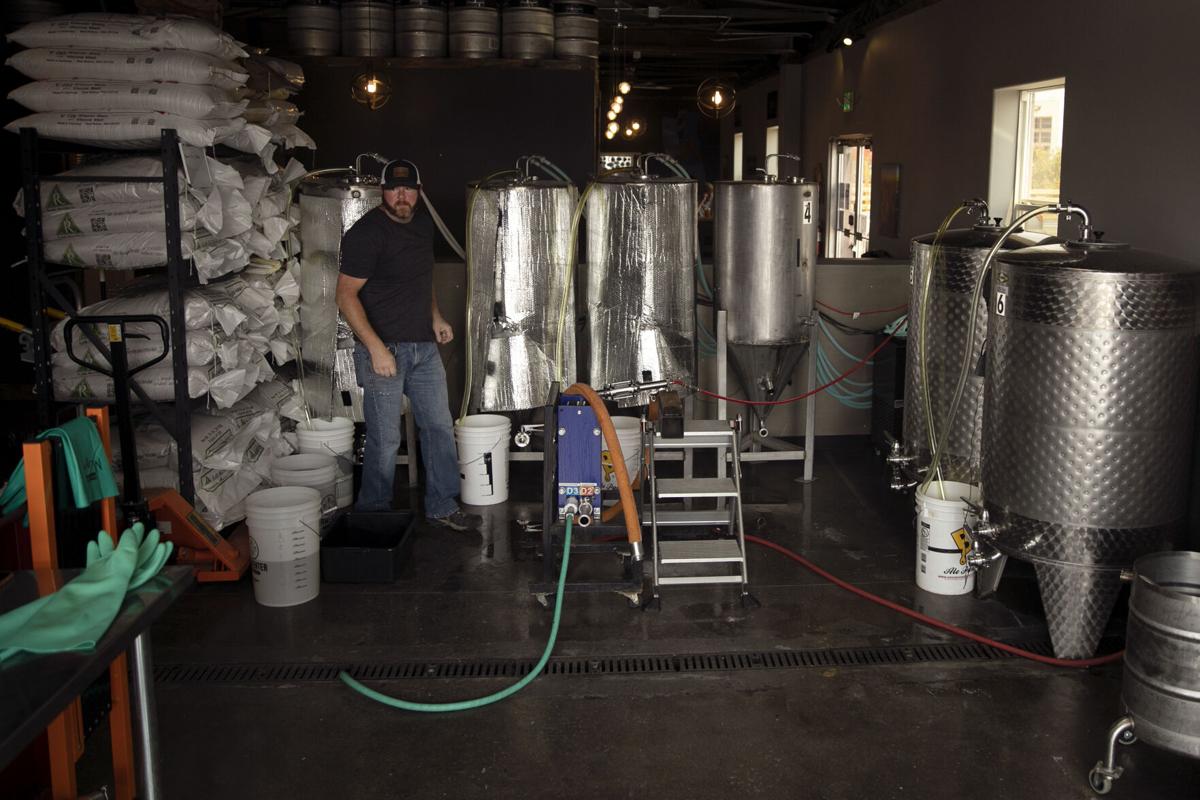 Brian Fischer, co-owner of Monumental Beer Works, brews a new beer titled Smoke, a wheat ale with peach. The proceeds from the new brew will go to the Wildland Fire Fighter’s Foundation.

Ryan Shearer cashes out a customer during his lunch shift.

Brian Fischer, co-owner of Monumental Beer Works, 2575 U.S. Highway 6&50, says looking back from the relative safety of six months, he thinks perhaps it helped that Monumental was new when COVID-19 shut down many businesses in mid-March.

Monumental Beer Works’ latest beer, titled Smoke, in the brewing process. Here, the wort is transferred through a plate chiller into a fermenter for the final stages of the brew process.

Brian Fischer, co-owner of Monumental Beer Works, brews a new beer titled Smoke, a wheat ale with peach. The proceeds from the new brew will go to the Wildland Fire Fighter’s Foundation.

There he was, teaching his students about developing a growth mindset, but he was actually thinking about beer.

Brewing beer to be exact.

Until the day, 17 years into his teaching career, when Brian Fischer suddenly realized, “I’m a damn hypocrite.”

So with his wife’s blessing, he quit teaching and started working for Living the Dream Brewing Co. in Littleton. That turned into a remote working job three years ago when the couple moved to Fruita, and he began putting together the business plan for what is now a reality: Monumental Beer Works in Grand Junction.

However, there was one rather large detail Fischer’s business plan completely overlooked: a pandemic.

One minute he and his wife, Laura Fischer, co-owners Nick and Megan Westfall and future partner Peter Campbell were celebrating the transformation of the scuba shop that had become their brewery.

The next minute they were laying off all but one of their employees who hadn’t even had the chance to work their first shift at the brewery.

Monumental’s owners were scrambling and it admittedly wasn’t pretty, yet.

Looking back from the relative safety of six months, Fischer thinks perhaps it helped that Monumental was new when COVID-19 shut down many businesses in mid-March.

“Customers still came to try what we had,” Fischer said.

And eventually those customers stayed when it was OK to dine-in instead of taking beer to go.

Being a place where people can hang out with family — kids are welcome on the back patio — and friends while drinking craft beer was the original idea for Monumental, Fischer said.

They started brewing on site on Feb. 12, and since then they have brewed nearly 50 different brands of beer, “which makes us really unique,” Fischer said.

They intentionally went with a smaller two-barrel brewing setup on the south end of the building. because it would allow them to “play a lot more,” creating new and unique beers, he said.

Just in the past month, Monumental brewed the Garden of the Gourds, which is supposed to taste like liquid pumpkin pie, and Smoke, a smoked peach ale, named in honor of the Pine Gulch firefighters.

”The fire was so in the face of everybody here because we literally had the ash falling out of the sky,” Fischer said. “I think it was more real to people.”

Smoke sold out in two days, and proceeds plus donations allowed Monumental to donate $2,500 to the Wildland Firefighter Foundation.

“As small as we are, as young as we are, it’s humbling and it feels amazing to be able to do things like that through our platform of beer,” Fischer said.

Using their beers and business to support various causes is something “we are very passionate about,” Fischer said. “We are very much community-oriented, plus beer.”

It has resulted in other donations to organizations such as the Community Food Bank of Grand Junction and Avalon Theatre Foundation as well as participation in some collaborative brewing efforts, including Black is Beautiful and Colorado Strong.

Intentional giving was part of the business plan for the brewery, but it also is a reminder of the generosity that was shown to Monumental back on March 19 when its grand opening became a to-go operation and opening at all was a leap of faith.

They only had 200 cans and zero growlers. Since they had such a small brewing system, they hadn’t planned to offer growlers, Fischer said.

The put out a call for help and Copper Club Brewing Co. in Fruita, Palisade Brewing Co. in Palisade, Lil Ole Winemaker in Grand Junction and members of the Bookcliff Home Brew Club — all the owners of Monumental were members of the brew club prior to founding the brewery — came to their aid so they could open while getting online to frantically order growlers and more cans.

When some of the cans did arrive, they were the wrong size so the labels didn’t fit. “It was another gut punch,” Fischer said.

But the owners group, who were all on deck when they could during those early days and weeks, broke out the scissors and made do. You can laugh or cry “and sometimes we do both,” Fischer said.

Eventually, they were able to hire employees again in May Monumental reopened with limited capacity seating so customers finally could see all the hard work and unique details Fischer and the other owners incorporated into the space when making a brewery out of what had been scuba shop.

“It was blue top to bottom,” Fischer said of the building’s interior. Even the windows were submerged in aqua blue paint. “It was hideous.”

Materials were also repurposed including what was found at a sheep ranch outside of Fruita and a cement lot next to Glacier Ice Arena to create the brewery’s look, he said.

As customers stroll in, they are greeted by Independence Monument in collage. It was created by Laura Fischer and Megan Westfall using old wood, corrugated metal and other materials used in the build out.

Behind the bar, a profile of Colorado National Monument stands out in white tile against old wood. One of the walls is filled with a mural and the other walls are open to local artists who want to display or sell their artwork, Brian Fischer said.

After reopening, the outside patio areas with picnic tables allowed them to serve more customers and provided an easy way to access the local food trucks Monumental hosts on a regular basis.

Monumental is adding some shade to the patios and looking into heating options so the outdoor spaces can continue to be used as the seasons change, Fischer said.

Monumental also wants to update its brewing operation from two barrels to seven later this year — COVID-19 has put the manufacturer, Rocky Mountain Vessels in Montrose, behind schedule so “we’re just waiting for it,” Fischer said.

The update was something the owners expected to do in a couple years, but 2020 had other plans. With to-go service, the brewery’s volume went up much faster than they had anticipated, Fischer said.

Monumental now has six employees in addition to the owners group and growing loyal following. Some customers like particular beers Monumental brews, others like that whenever they walk in there is something new for them to try, Fischer said.

There are still folks discovering the brewery as people become more comfortable getting out and hanging out. “We’re still kind of new,” he said.

But when a customer does come through the door, Fischer has a no complaining rule. “They don’t want to hear about our issues with COVID-19 when they come in for a beer,” he said.

Despite pandemic, despite wildfire smoke, despite the quick changes that had to made to business and service plans, “we are having a lot of fun,” Fischer said.

For information about Monumental, go to monumentalbeerworks.com. For details about special craft beer releases and other events, look for the brewery on Facebook.