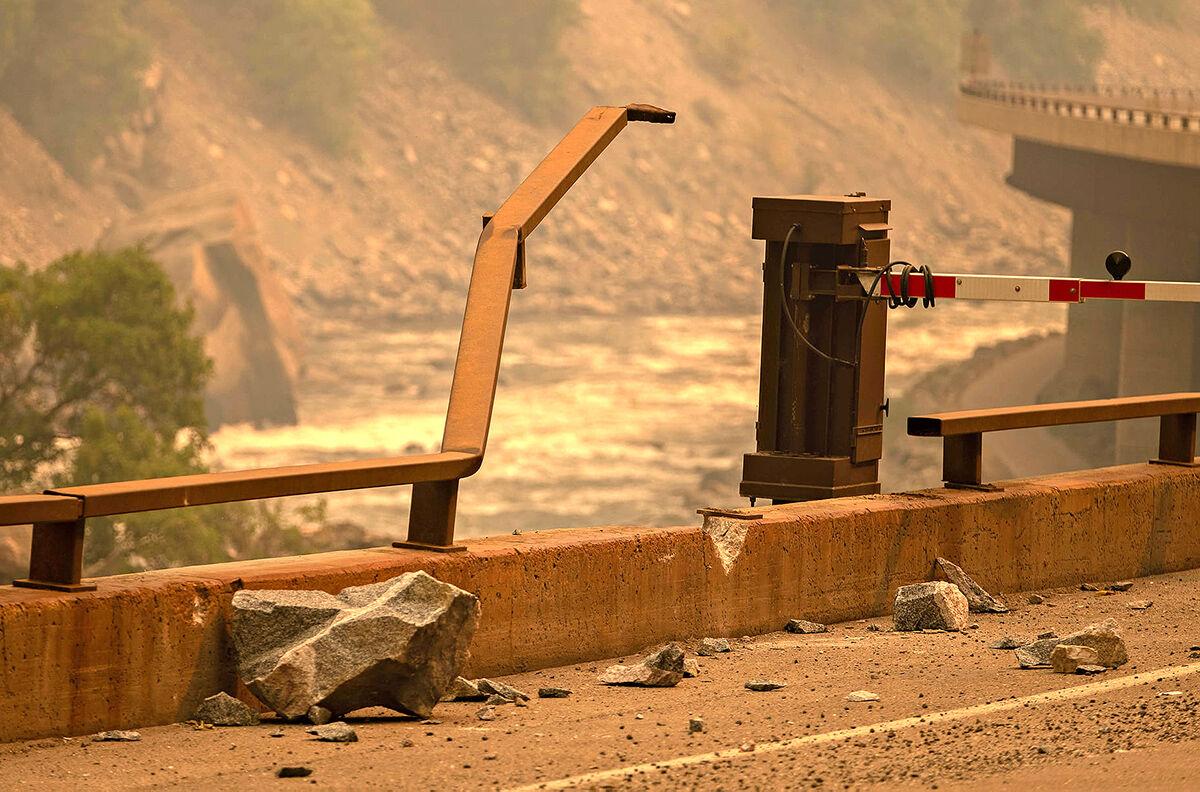 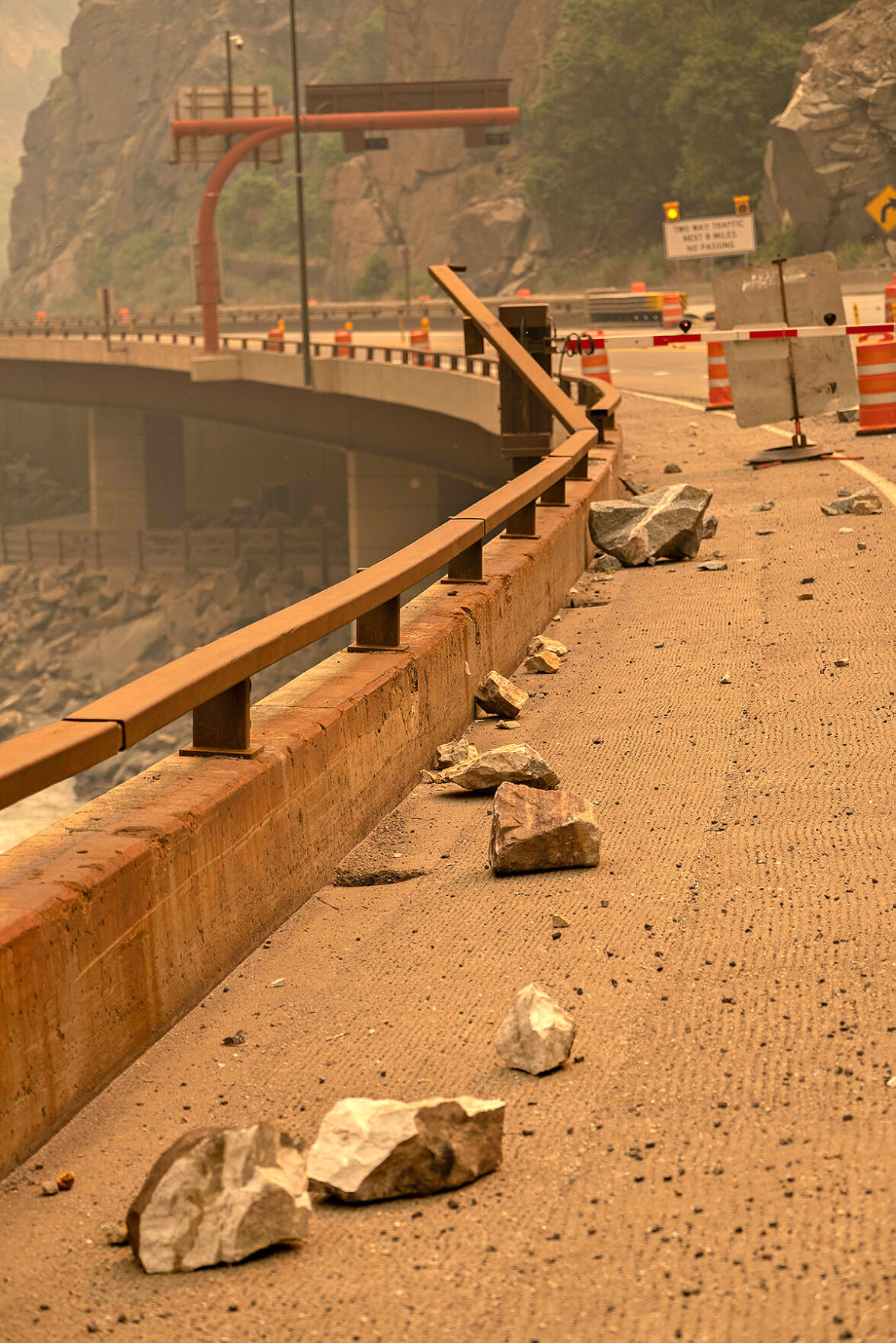 No end is in immediate sight for a travel-crippling closure of Interstate 70 through Glenwood Canyon because of an ongoing wildfire that is more than 25,000 acres in size.

The Grizzly Creek Fire started Aug. 10 from unknown causes along I-70 on the west side of the canyon and forced the major interstate thoroughfare’s closure that same day. It has burned through much of the canyon and up side canyons, and so far has made reopening of I-70 unsafe and required motorists to take lengthy detours.

“As the fire continues and firefighting operations continue, at this time we have no estimated time of reopening, and we appreciate everyone’s patience,” said Colorado Department of Transportation spokeswoman Elise Thatcher.

The canyon has faced past closures, often from rockfall. Thatcher said the current closure is one of the longest, if not the longest, in recent memory.

“We know it’s challenging to have the closure continue, but it’s a necessary state of things given that there is still fire burning near Interstate 70,” she said.

Brian Scott, a spokesman for the incident management team overseeing the fire response, said that as of a couple of days ago, a lot of unburned vegetative fuel remained on the south side of I-70 and the Colorado River in the canyon, even as fingers of spot fires began to burn on that side. That unburned fuel has been a concern because of its potential for burning later and endangering motorists, but in the last few days some of those fingers of fire have expanded and merged together. That’s a good thing as far as moving toward reopening of the highway, Scott said.

Firefighting operations on the canyon floor or aerially above it also have been a factor in keeping the roadway closed.

Said Scott, “We really have a lot of fire traffic that’s up and down that corridor as well. For public safety, firefighter safety, we really have to be careful of that,” said.

Other safety considerations also are in play, such as falling logs and rocks. Scott said boulders “the size of a VW” have fallen onto interstate lanes and demolished roadway railings. Thatcher said the ongoing danger posed by the active fire has limited CDOT’s ability to safely assess the threats the fire has created for the roadway, and it may create further threats before it’s finished burning.

She thinks the public generally has been pretty understanding of the I-70 closure, going so far in social media comments as to repeat CDOT’s recommendation that people take a southern detour route involving U.S. highways 24, 285 and 50.

Colorado Highway 82 has been reopened over Independence Pass outside Aspen after it initially closed when semitrailers tried to use the road as a detour. Commercial motor vehicles and other vehicles and vehicle/trailer combinations more than 35 feet in length aren’t allowwed to drive over the pass. Thatcher said few trucks are having to be turned around there, and the traffic flow has been fairly smooth.

Flaggers sent alternating traffic through narrow parts of the highway segment Sunday, typically a busy traffic day on the road.

Some 650 personnel are fighting the Grizzly Creek Fire. Scott said the fire has spread to flatter, higher ground at the top of the canyon where there is more sagebrush and grass and fewer conifers that are more receptive to burning, and it’s also easier for crews to fight in that more level terrain.

Over the weekend, a wind shift also meant the fire burned back on itself, limiting its spread and helping let firefighters cut fire line in some areas directly against the burned area.

However, thunderstorms with possible winds but little expected rain are in the forecast for a few days, tempering what level of comfort Scott has when it comes to firefighters getting the upper hand on the blaze soon.

The fire as of midday Monday, was officially 25,690 acres in size. Of that acreage, 20,665 acres are in the White River National Forest, making it the largest fire on record within that forest.

The next-biggest was the Big Fish Fire in 2002, which burned about 17,000 acres, almost all of it in national forest, in the Trappers Lake area east of Meeker.

White River National Forest spokesman David Boyd said the Grizzly Creek Fire sparked at a time and a place where a measure of the energy release component — an indicator of how hot a fire burns based on live and dead fuel moisture levels — was at the 97 percentile, the highest or worst measurement in terms of fire danger in a 10-year period.

“We knew conditions were bad. It burned very rapidly through the canyon,” he said.

The canyon topography also has worked against firefighters, with much of it being too steep and rugged for crews to access and safely fight the blaze.

Instead, they focused initial efforts on protecting areas such as the No Name residential neighborhood east of Glenwood Springs and the Shoshone hydroelectric plant.

Evacuations in No Name and some other areas remain in place.

The fire remains 0% contained, and officials estimate it won’t be fully contained until Sept. 1.

Even once it’s out, longer- term threats will remain in the canyon, including to I-70.

Fires often are followed by problems such as debris flows when heavy rains fall on steep terrain stripped of vegetation.

This week, what’s called a Burned Area Emergency Response team is scheduled to do an initial assessment of the fire damage and long-term threats.

Boyd said while BAER teams typically don’t do most of their work until a fire is 70% or 80% contained, the initial effort will help provide a better understanding of the threat to I-70.

Such assessments can lead to vegetation seeding and other measures to reduce possible long-term impacts.

Another long-term impact could be an increased threat of rockfall in a canyon where CDOT already has taken lots of measures to try to address that threat.