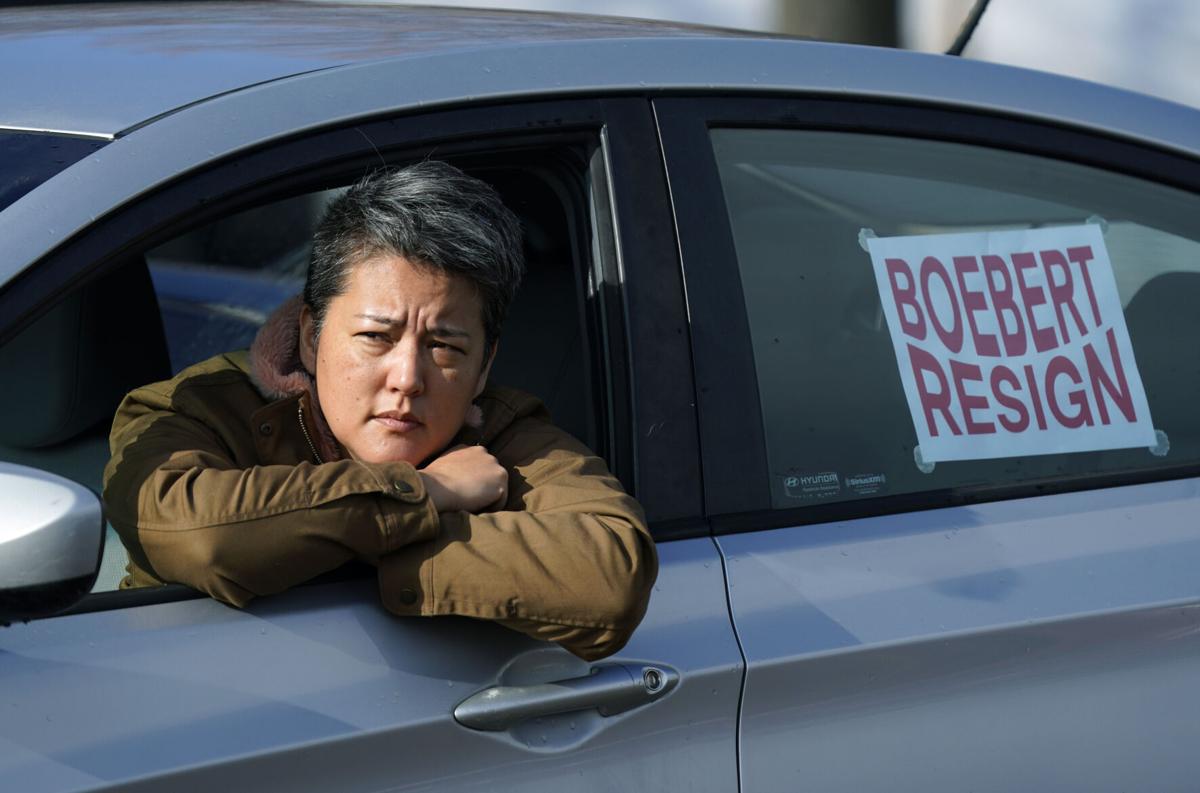 A protester listens to speakers during a gathering calling for the impeachment of President Donald Trump at South High School before a car rally Sunday through the streets of Denver. They also called for the removal from office of Colorado Republican U.S. Reps. Lauren Boebert and Doug Lamborn. 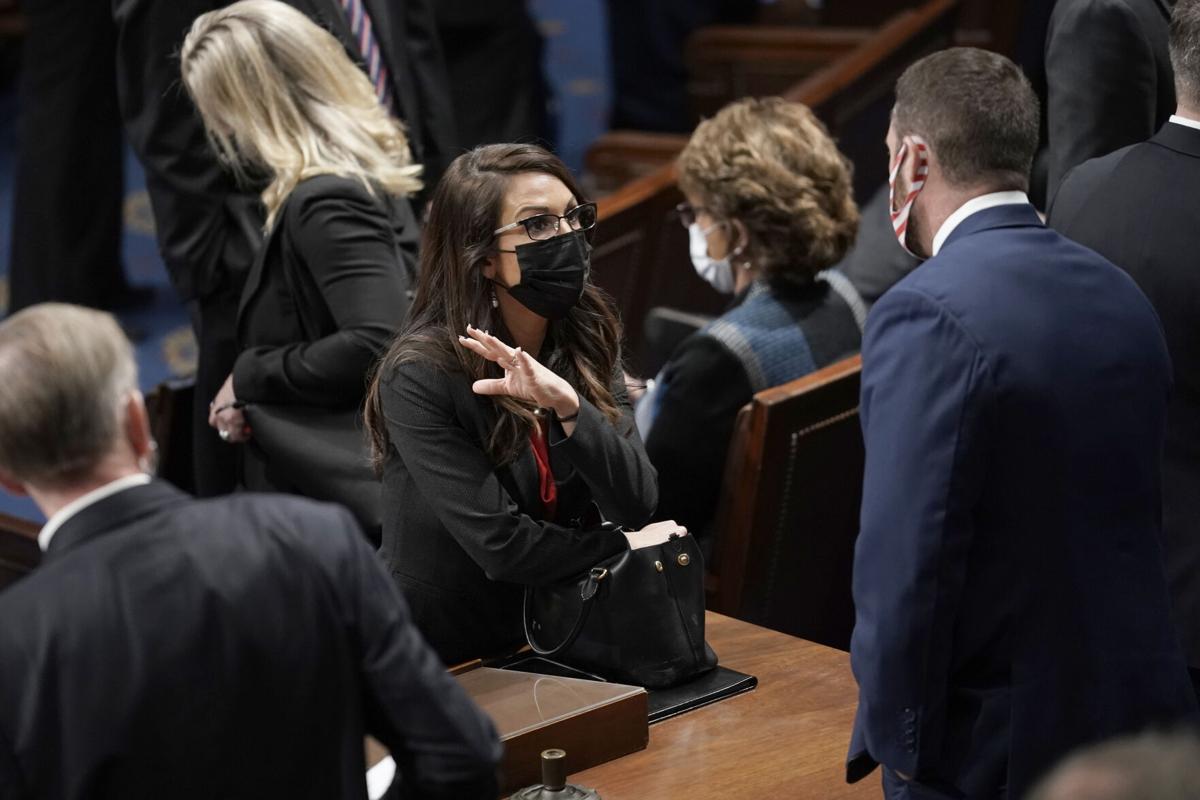 PHOTOS BY the ASSOCIATED PRESS

U.S. Rep. Lauren Boebert, R-Colo., center, and other Republicans wait last Wednesday as the House and Senate convene to count the Electoral College votes cast in November’s election, at the Capitol in Washington.

A protester listens to speakers during a gathering calling for the impeachment of President Donald Trump at South High School before a car rally Sunday through the streets of Denver. They also called for the removal from office of Colorado Republican U.S. Reps. Lauren Boebert and Doug Lamborn.

PHOTOS BY the ASSOCIATED PRESS

U.S. Rep. Lauren Boebert, R-Colo., center, and other Republicans wait last Wednesday as the House and Senate convene to count the Electoral College votes cast in November’s election, at the Capitol in Washington.

U.S. Rep. Lauren Boebert is lashing out against those who have called for her arrest and resignation over her actions last week before and during the riot on Congress.

Her denouncers, mostly Democrats, have said they believe Boebert, a Rifle Republican who won Colorado’s 3rd Congressional District last November, helped incite the riot by tweeting before it began, “Today is 1776,” and later, those same critics say she tried to help rioters locate House Speaker Nancy Pelosi when she tweeted that the Democratic speaker had been escorted out of the House chambers.

“As if I were revealing some big secret,” Boebert said in a lengthy press release. “This removal was also being broadcast on TV.”

Like other federal lawmakers who challenged the results of some states’ Electoral College results that same day that showed that Joe Biden had won, which was why supporters of President Donald Trump were in Washington, D.C., Boebert and U.S. Rep. Doug Lamborn, a Colorado Springs Republican, have faced repeated demands to resign.

Others have called for Boebert and other challengers of the Electoral College results to be investigated by federal authorities for their possible roles in helping incite the Trump supporters to storm the Capitol, and have asked House and Senate leaders to vote on removing them from their ranks.

Unlike state laws that allow for elected officials to face recall elections, the U.S. Constitution only gives the U.S. House and Senate the authority to remove its own members before they are up for re-election.

While nothing like that is, as yet, expected to happen, it hasn’t stopped Democrats from calling for her ouster, including starting petition drives in an attempt to persuade congressional leaders to do just that.

“Boebert has shown zero interest in upholding the Constitution and has put other people’s freedom to vote in the crosshairs by trying to overturn the results of a free and fair election,” said Kevin Kuns, chair of the Montrose Democratic Party.

“Whether Boebert’s actions were willful ignorance or purposeful insurrection to overthrow a democracy, I agree with the tens of thousands of people who tweeted #ResignBoebert. Boebert must resign. Our district deserves better,” he said.

On Tuesday, CNN reported that House members and staff will have to go through metal detectors to access the House chambers at the request of Democrats fearful of some Republicans who they suspect lamay have been complicit with D.C. rioters.

Boebert has repeatedly said she would carry a sidearm around the Capitol complex at her leisure, including posting a high-quality video touting that. While she has indicated she would comply with rules not to bring a weapon onto the House floor, Boebert previously said she was upset with Capitol police for not providing her with a locker to store her Glock before entering the chambers.

The congresswoman also has been criticized for, on one hand, denouncing Twitter and Facebook for removing Trump’s accounts as a violation of the president’s First Amendment rights, and then blocking critics from her own Twitter account, denying them their free-speech rights.

Former state Rep. Bri Buentello, a Pueblo Democrat, said she and others have been blocked by Boebert recently from the congresswoman’s personal Twitter account, an action that could lead to lawsuits.

“The congresswoman has conducted herself in a manner that is both un-American and beneath the dignity of the office she holds,” said Buentello, who lost her re-election bid to the Colorado House in November. “Lauren Boebert can’t say she’s for freedom and the Constitution while standing with a seditious mob and tweeting ‘Today is 1776’ to encourage rioters in the U.S. Capitol.”

Boebert, however, counters that over the years, Democrats have done that at various times, including after Trump got elected in 2016.

In her lengthy press release, the congresswoman cities numerous quotes from Democrats, such as Pelosi saying in 2018, “I don’t even know why there aren’t uprisings all over the country,” in reference to migrant children being forcibly separated from their parents, or U.S. Rep. Ayanna Pressley, D-Mass., who said last summer, “There needs to be unrest in the streets for as long as there’s unrest in our lives,” in response to Trump’s presidency in general.

Neither statements, nor any others cited in Boebert’s release, however, were associated with inciting any actual violent acts, including last summer’s riots in numerous U.S. cities over Black Lives Matter.

Boebert also called Democrats hypocrites for chastising Republicans over last week’s riots while they showed support of those summer riots, repeating claims that Vice President-elect Kamala Harris directly bailed out some of the rioters who had been arrested. Harris has been a long-time supporter of a group that helps low-income people raise bail.

Still, Boebert went on the attack, saying Democrats are setting a different standard for those who participated in last week’s riot, and those during the summer.

“Their hypocrisy is on full display with talks of impeachment, censure and other ways to punish Republicans for false accusations of inciting the type of violence they have so frequently and transparently supported in the past,” Boebert said. “They act as though a reference to the founding of our country and the bravery of upholding our constitutional oath is criminal, which says a whole lot more about them than it does about me or any other Republican.”

Democrats, however, say there is a huge difference between people protesting and rioting because of provable injustice to Black Americans, including those killed by police officers who now are facing murder charges, and people rallying and attempting an insurrection for a president who lost an election that numerous election officials from both parties in numerous states have repeatedly said was conducted fairly.

“There needs to be consequences for the actions of those in power who pledged their full-fledged support to an attempted coup of the United States government and a second revolution,” said George Autobee, a retired Marine combat veteran who formed a Pueblo-based political group opposing Boebert. “Lauren Boebert must be held accountable for her betrayal of the citizens she claims to represent.”