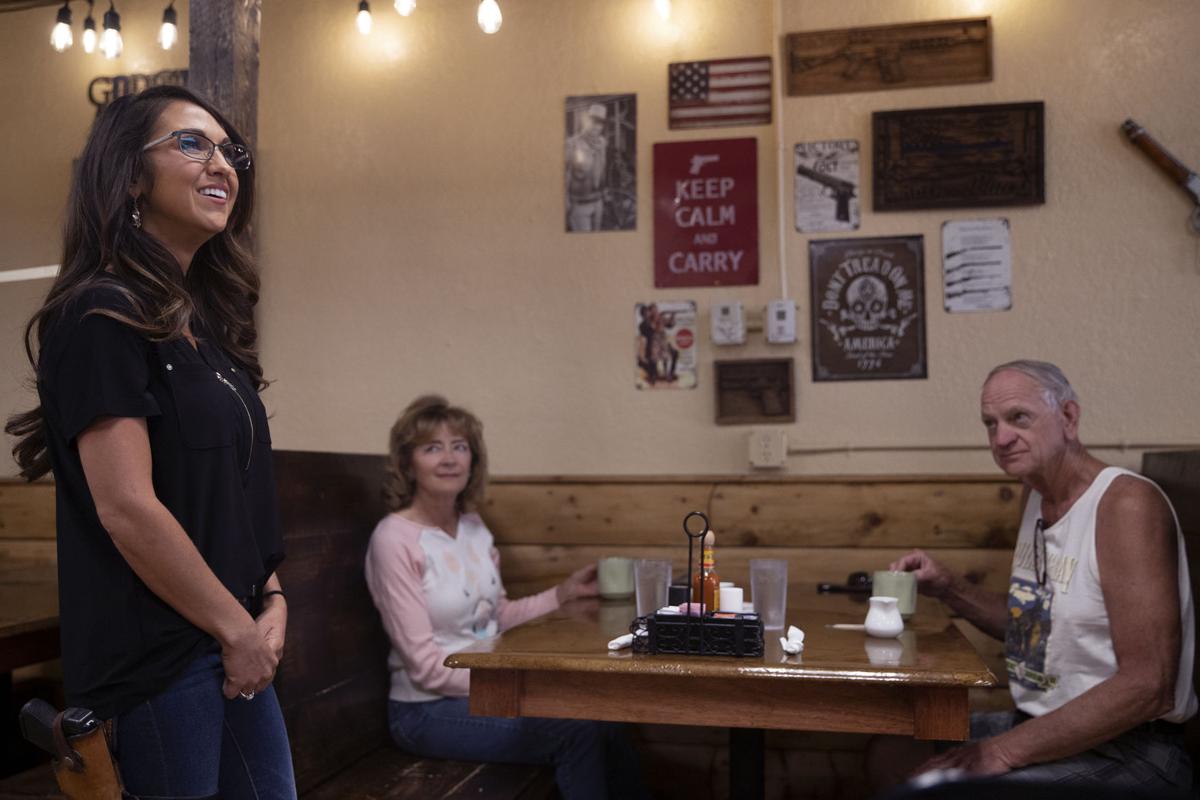 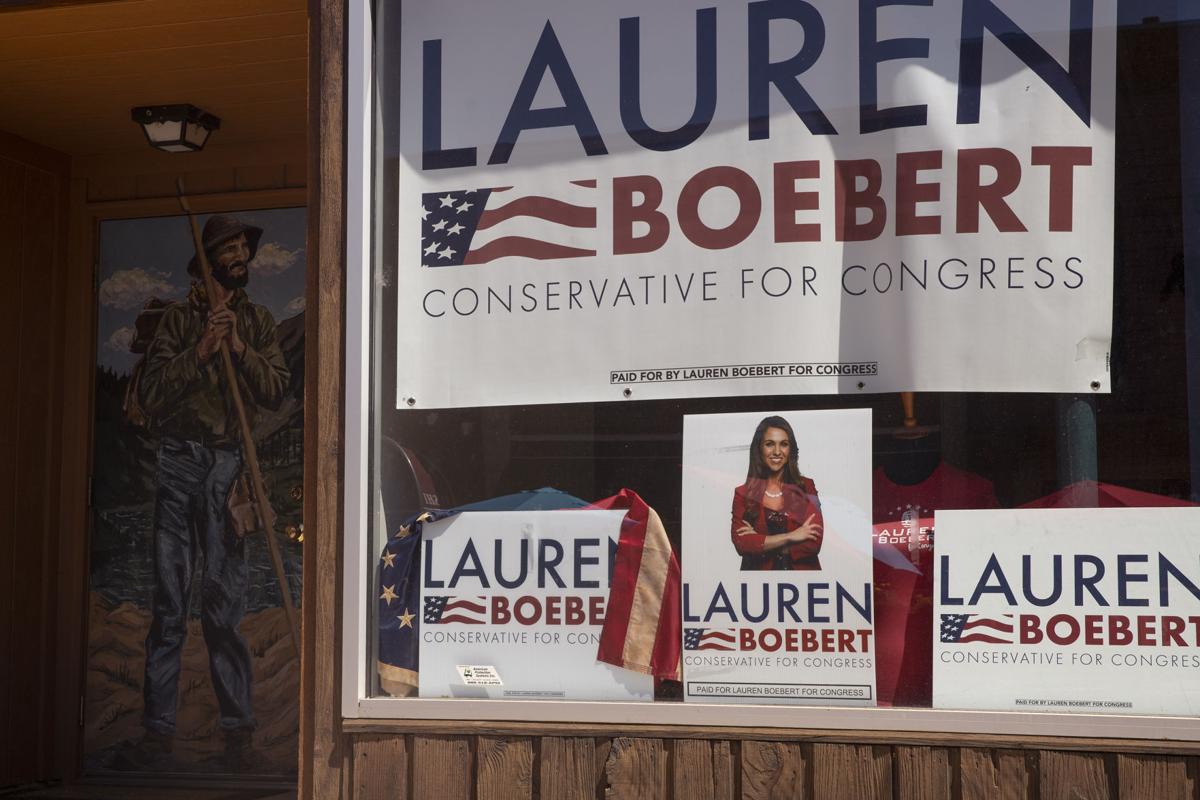 Lauren Boebert’s new campaign office is located next to Shooter’s Grill in Rifle. 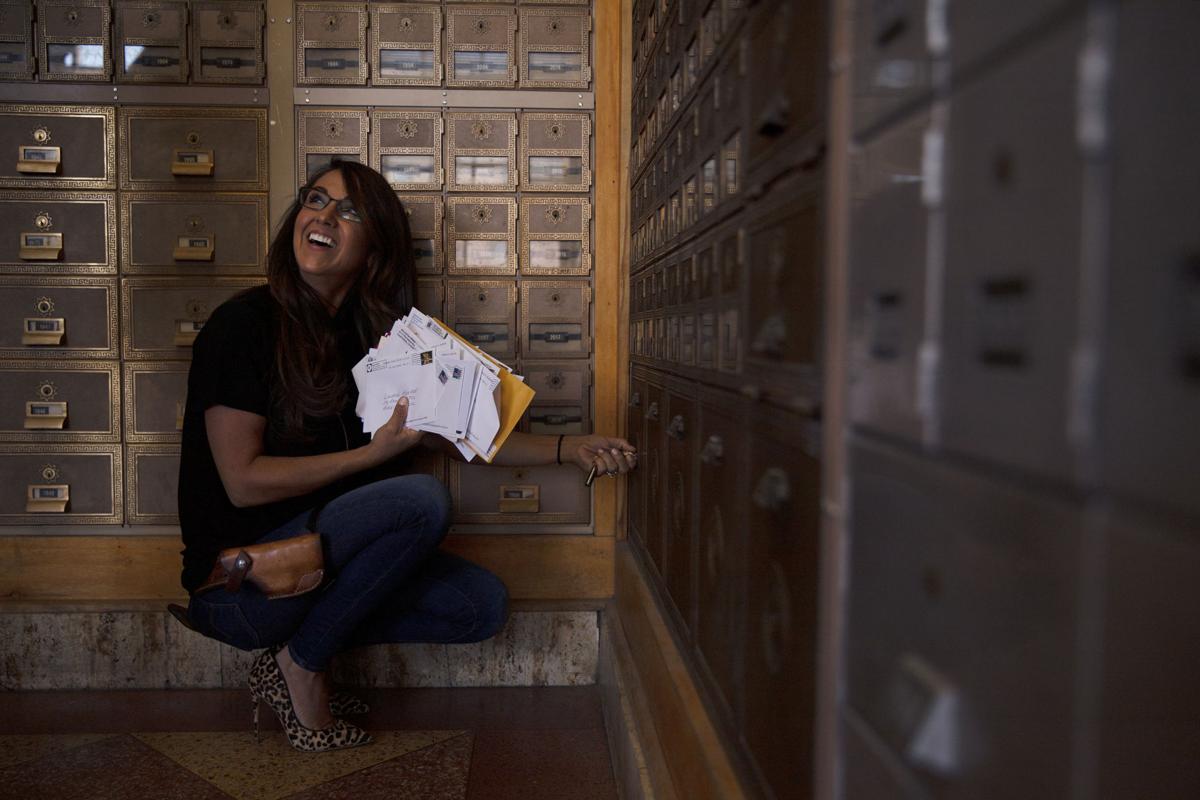 Lauren Boebert checks her mail for the first time since the primary election at the Rifle Post Office. Before the election, Boebert said she would get maybe three letters per week. 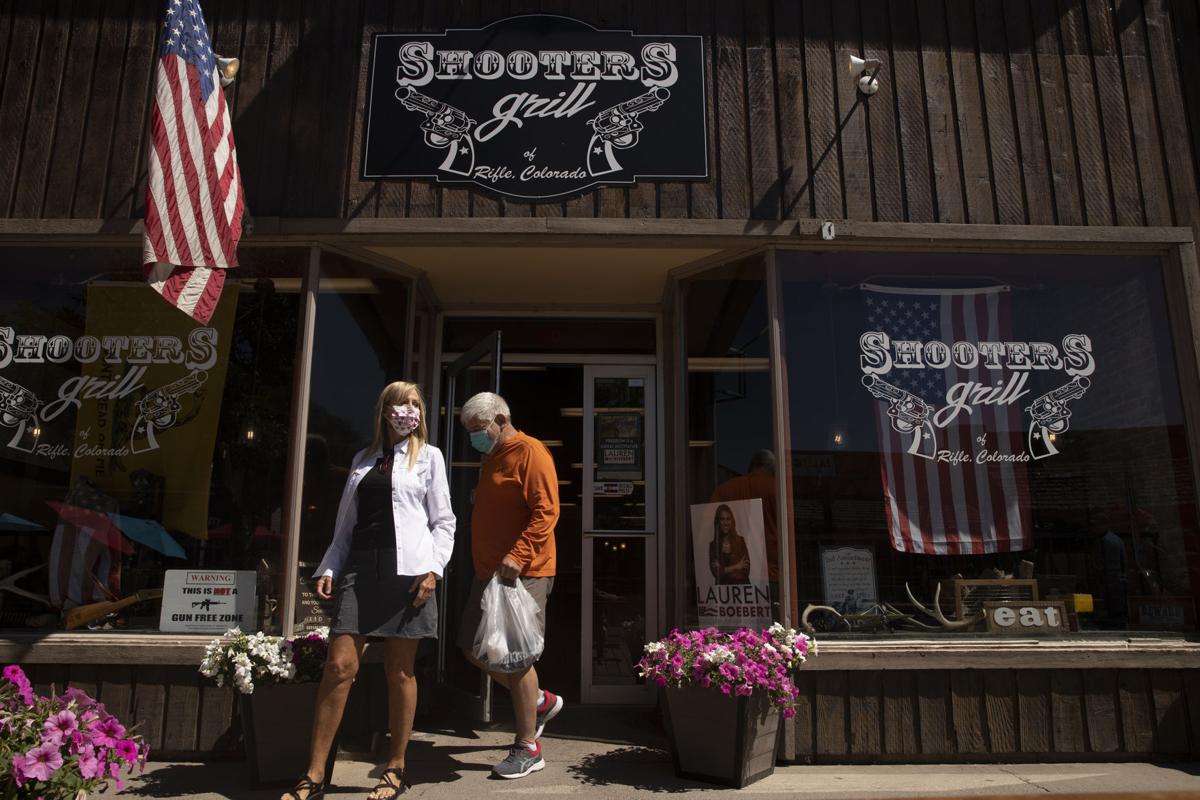 Kathy and Brent Boyd leave Shooter’s Grill after eating breakfast on Wednesday. The Boyds, on vacation, visited Shooter’s per a friend’s suggestion, as avid supporters of Lauren Boebert.

Lauren Boebert’s new campaign office is located next to Shooter’s Grill in Rifle.

Lauren Boebert checks her mail for the first time since the primary election at the Rifle Post Office. Before the election, Boebert said she would get maybe three letters per week.

Kathy and Brent Boyd leave Shooter’s Grill after eating breakfast on Wednesday. The Boyds, on vacation, visited Shooter’s per a friend’s suggestion, as avid supporters of Lauren Boebert.

Stop a passing pedestrian and she may turn out to be someone like Hana Rickard, who goes to Boebert’s church and said she wasn’t surprised by Boebert’s win.

“She’s got a great personality and I think people like what she has to say,” said Rickard.

Rickard shares Boebert’s political views and is optimistic about her chances in the general election against Democrat Diane Mitsch Bush.

“I think that she’ll take it all the way to D.C.,” Rickard said.

Inside Crescent Moon Spiritual Goods, about a block away from Boebert’s Shooters Grill, store owner Tamara Degler enthused over what she considers Boebert’s surprising victory. She thinks it was time for Tipton to go, loves to see someone from Rifle running for Congress and is excited to see how Boebert will do in November.

“She’s got guts and I give her credit for that. She’s willing to put herself out there, to stand up for what she believes in, and I appreciate that.”

But within Boebert’s own party in Garfield County, where she only narrowly beat Tipton, there’s also apprehension among some about the potential consequences of her primary win.

Republican Brett Jolley believes voters in the primary just handed the seat to the Democrats and Mitsch Bush, unless somehow Trump has a landslide victory that carries over to Boebert’s race.

“I’m not thrilled about it,” he said of the primary outcome. “I’m afraid we just gave up our congressional seat.”

He said Tipton didn’t help himself by running a bad campaign in which he “kind of ignored” Boebert while trying to take the high road and not talk negatively about her.

Kelly Couey, whose wife Carrie until recently was chair of the Republican Party in Garfield County, took to Facebook right after the primary to lament the outcome. He asked primary voters what they were thinking, voiced disappointment at the low turnout and called Boebert “not the better person for the job.” His post elicited about 100 comments, some from people who like Couey are concerned about Boebert’s victory, and others from people encouraging fellow Republicans to support Boebert.

“I wish her luck, but I’m not a fan,” Couey said in a brief interview about Boebert.

He said she has no experience and thinks Mitsch Bush “will win the election handily,” having far more money in hand for her campaign.

But he added, “The bottom line is (Boebert) is the party’s representative (in the general election). We do have to get behind her.”

‘IT TAKES A MODERATE’

Jolley said he’ll vote for Boebert. But he believes with the 3rd District roughly split evenly between Republicans, Democrats and Independents, “it takes a moderate to win from either party.”

Boebert beat Tipton by saying he’s too moderate and touting her conservative values. In doing so, she became the first person to unseat a congressional incumbent in Colorado in a primary since 1972, when longtime Democratic congressman Wayne Aspinall of Palisade lost to Alan Merson, who then lost that November, Republican political strategist Dick Wadhams wrote in the Denver Post.

Jolley, a rancher, doesn’t believe Boebert has positions on much beyond gun rights and abortion, and said that while those issues are important, there are other issues such as water, health care and agriculture that are important for the local congressional representative to work on.

Garfield County Commissioner John Martin, a Republican, said voters this fall will choose from someone on the far left and the far right.

“It’s interesting. The world is crazy, but we’ll see what happens,” he said.

As for Boebert, “I have to support her. She’s part of the party and what have you.”

Vallario said he backs Boebert for her conservative views, including her stance on gun rights and family values, and also thinks her youth and energy are needed.

He said he’s friends with Tipton, but added, “I think he just kind of got sucked up into that whole congressional thing. He just didn’t really seem to be out there I guess banging on the desk and fighting like I would like to see.”

Vallario said everyone lacks the experience to hold the office they’re first running for. He also thinks Boebert shouldn’t be underestimated in the general election.

“No one thought she would beat Tipton and she did,” he said.

Vallario thinks voters may decide there are too many middle-of-the-road types in Congress and want a strong conservative in office.

“I think a little bit of maybe kind of right-wing conservative values are really needed, if nothing else to balance arguably the very, very left-wing liberal side of the (U.S.) House,” he said.

‘ANTIDOTE TO THE SQUAD’

Boebert said in an interview this week that she’s “the antidote to the Squad,” a group of liberal Democratic congresswomen including Alexandria Ocasio-Cortez.

She said she’s tired of no one challenging Ocasio-Cortez’s agenda.

“She’s not slowing down in gaining popularity, and her narrative is running rampant through our country and our representative was utterly silent about it. I believe if we’re silent, we lose by default,” Boebert said.

Democrat Leslie Robinson, who is challenging Republican incumbent Mike Samson in a Garfield commissioner race, was shocked by Boebert’s win and thinks it boosts Mitsch Bush’s chances in the November election.

“I think voters may be tired of fringe candidates in some respects, and they’ll be looking for candidates that are more moderate. But I ain’t no moderate so I don’t know. I don’t know what to expect (in the congressional race). It’s like, whoa,” she said.

Boebert said her opponent, Mitsch Bush, is a social worker and professor whose “platform is more government control.”

“Fortunately for me, voters can look to her history and see her socialist agenda,” she said.

Colin Hornsby, a consultant for Mitsch Bush, a former state lawmaker, on Friday called her a “pragmatic problem solver whose moderate approach earned her Legislator of the Year from both the Colorado Livestock Association and the Rocky Mountain Farmers Union.”

“She has a proven bipartisan track record of delivering real results on issues like family agriculture, water, transportation infrastructure, and broadband. Diane listens, works across the aisle, and delivers, and that is why she is better positioned to represent Colorado,” he said.

He said Boebert is “extreme and out of touch,” with values that don’t represent the 3rd District.

“She spends more time entertaining QAnon conspiracy theories than creating real solutions for issues facing Colorado. People are not looking for someone who ‘is tired of compromise’ when they are losing their jobs and struggling to pay the bills, while navigating a global pandemic. Diane has a bipartisan record of finding solutions to the challenges Coloradans face, and is the problem solver Coloradans want during these difficult times, and that’s why they will send her to Washington in November.”

QAnon is a far-right conspiracy theory focused on an alleged “deep state” conspiracy against President Trump. Boebert has been criticized for comments her critics say have failed to distance herself from it. She reportedly said she hopes “that this is real” and thinks it means people are returning to conservative values. She said last week that in commenting on QAnon she called it “fringe,” but that part of her comments weren’t reported. She recently called QAnon “fake news” in a tweet responding to criticism from Democrats.

“I don’t follow QAnon,” she said last week. “The thing that I was referring to — anything that’s going to get conservatives to get involved with politics is definitely interesting and worth looking at.”

As for her conservative views, “it’s not extreme to support the Constitution of the United States of America,” she said.

“When I am talking to … unaffiliated voters, they want to know that someone is going to limit government control and these regulations and things that burden our everyday life.”

Boebert said she’s not surprised her primary race was so close in Garfield County, where she said the Republican Party was staunchly against her.

“I mean, there were vicious attacks coming from my own party here,” she said.

She said she has no hard feelings.

“I just encourage all the people who were supporting Tipton to come on board. We’re having a lot of fun and we’re going places, and I want them to go with us,” she said.

Vallario said he will do what he can to help Boebert in the general election race.

“Hopefully the rest of the party faithful will get over the (Tipton) loss and get behind her as well,” he said.

Back in downtown Rifle, Guadalupe Hall, who owns a beauty salon, was happy to hear of Boebert’s primary win. She admired Boebert’s decision earlier this year to serve diners in her restaurant against pandemic-related health orders. At the time, Garfield Commissioner Tom Jankovsky viewed that move as counterproductive to the county’s plans to try to get a state variance letting eateries reopen to sit-down dining. The county also temporarily suspended Shooters’ license, but Hall thinks Boebert’s efforts helped in getting other restaurants and businesses opened.

“I think we need more people like that to stand up for small-town communities,” said Hall, who thinks Boebert’s impacts could be exponentially greater if she is elected to Congress.

There’s still 115 days before the election, so campaign season is really just starting.

The Daily Sentinel will be following several races closely, including the 3rd Congressional District and the two Mesa County Commissioner races. It’s a long election season, and the Sentinel will be tracking down all the candidates to put them in the spotlight and under the microscope.