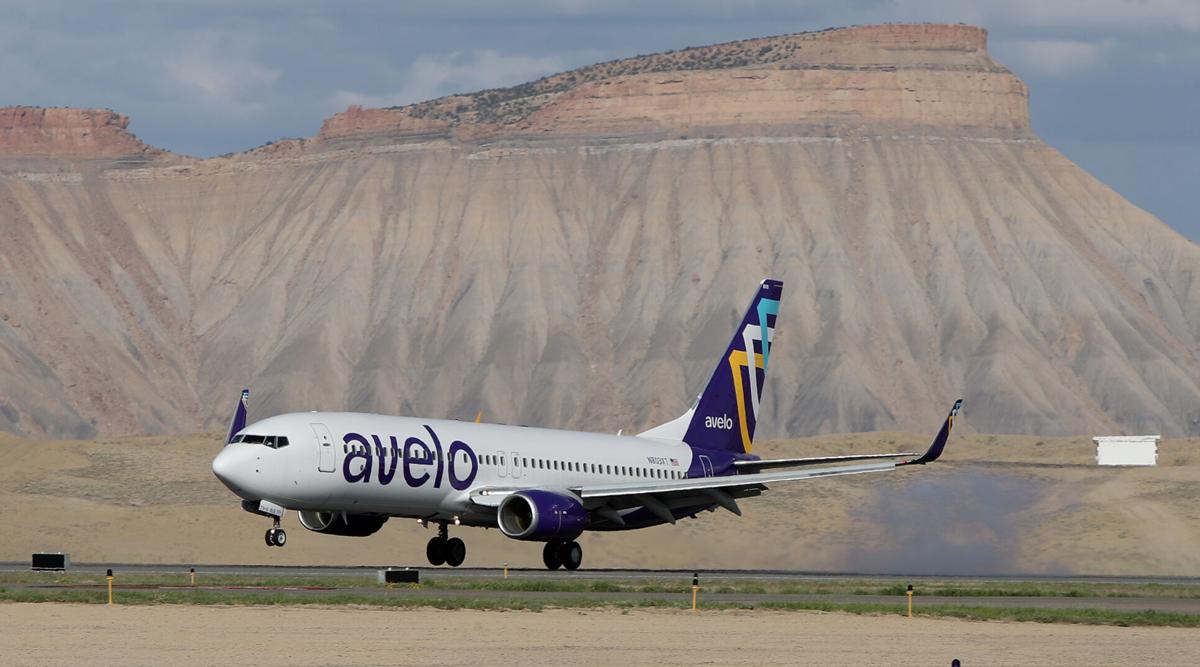 Mount Garfield provides the scenic backdrop for the first Boeing jet of Avelo Airlines to land on the Western Slope. The airline offers ultra-low-cost fares. 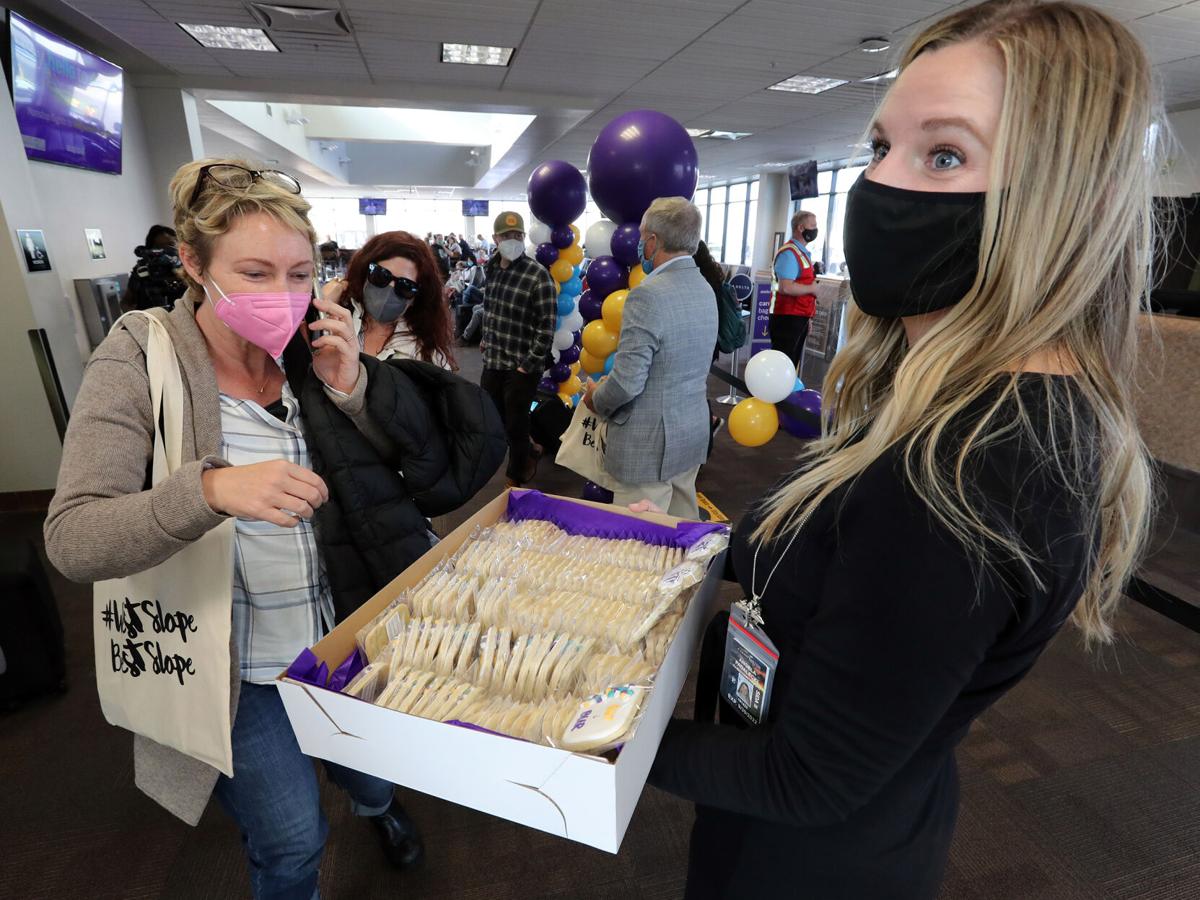 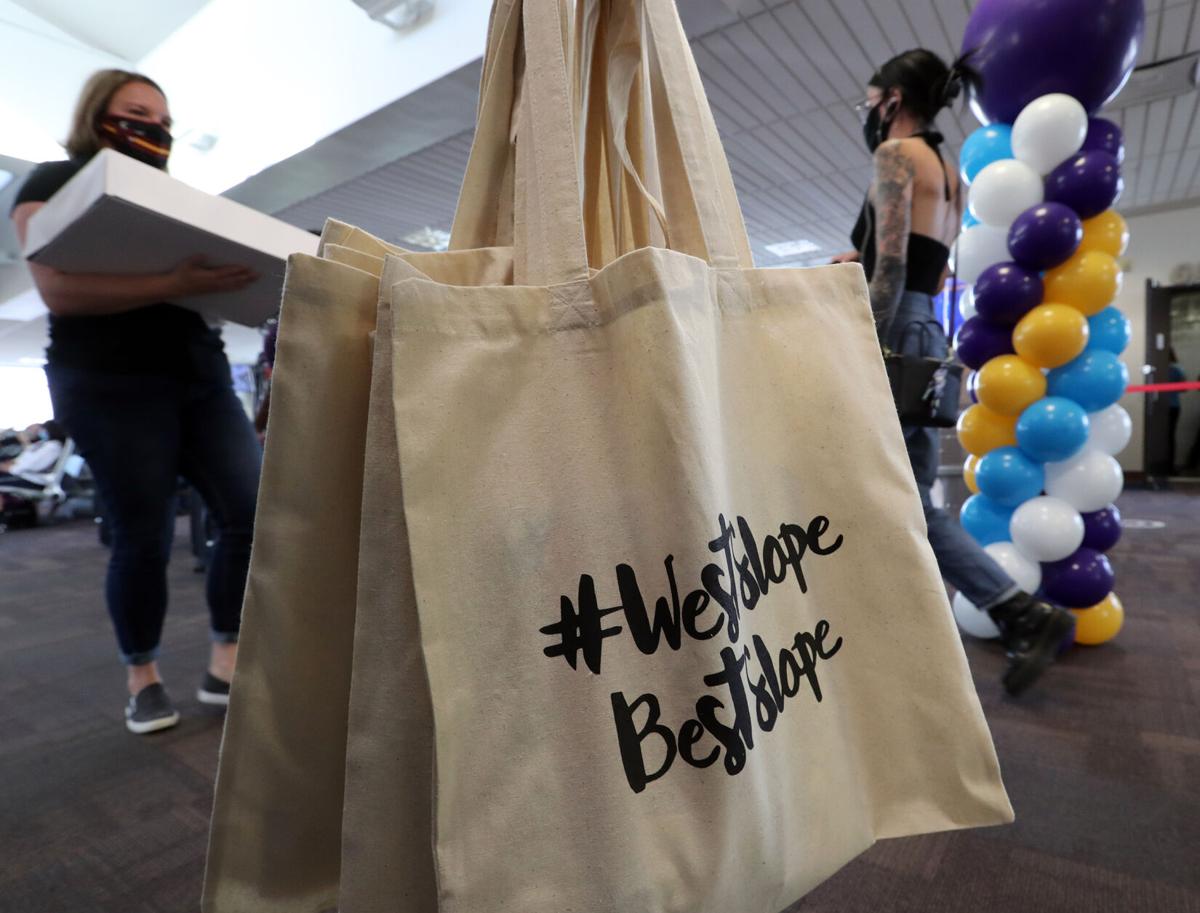 Goodie bags, cookies and balloons await the first passengers off the flight from Burbank, California, to Grand Junction Regional Airport. 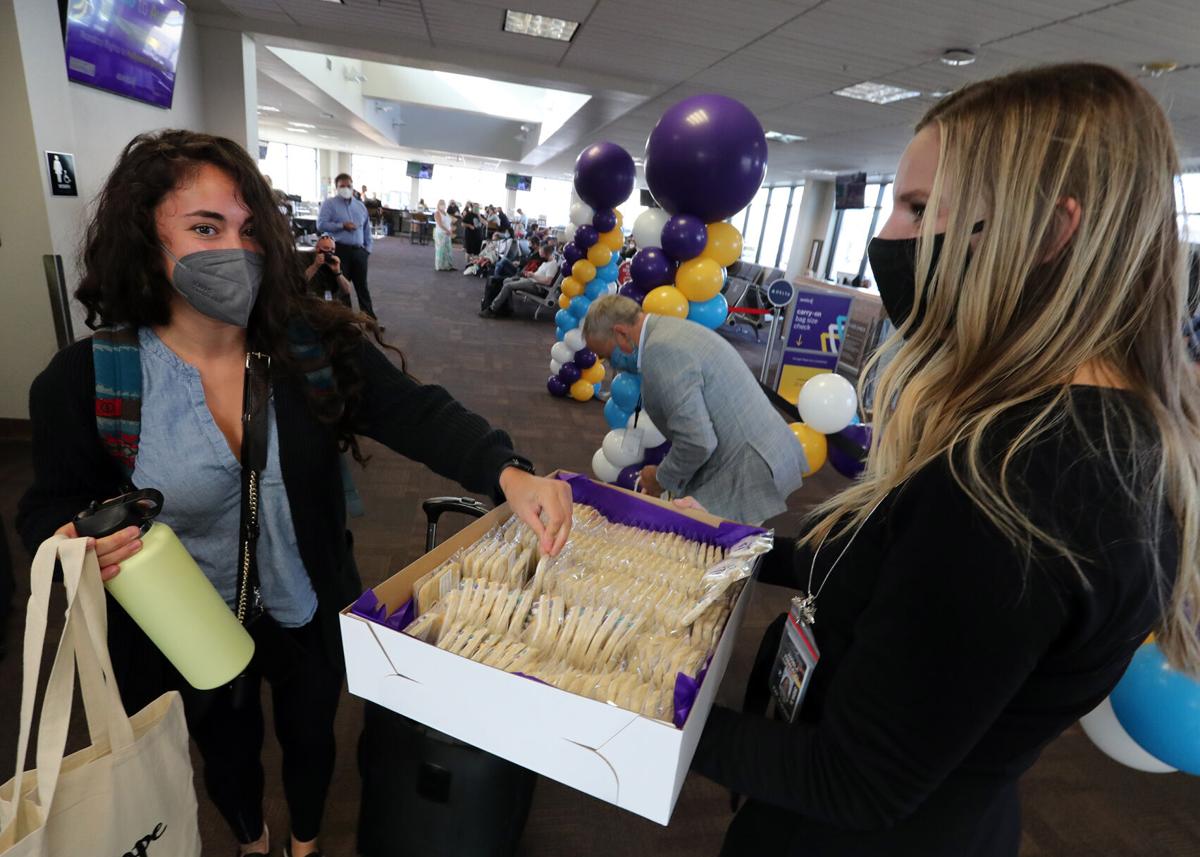 Passengers deplaning from the inaugural flight of Avelo Airlines from Burbank, California, receive goodie bags and cookies from Angela Padelecki, executive director of the Grand Junction Regional Airport. See the story on Page One.

Mount Garfield provides the scenic backdrop for the first Boeing jet of Avelo Airlines to land on the Western Slope. The airline offers ultra-low-cost fares.

Goodie bags, cookies and balloons await the first passengers off the flight from Burbank, California, to Grand Junction Regional Airport.

Passengers deplaning from the inaugural flight of Avelo Airlines from Burbank, California, receive goodie bags and cookies from Angela Padelecki, executive director of the Grand Junction Regional Airport. See the story on Page One.

Those wishing for some time away from Colorado’s Western Slope in favor of southern California sunshine — or vice versa — have a new, inexpensive alternative to make it happen.

On Sunday evening, a Boeing 737-800 serviced by Avelo Airlines landed at Grand Junction Regional Airport and made its way to its designated gate, flanked by water-spouting fire engines, dousing the plane in an act of celebration. When its passengers departed the aircraft, they were welcomed to the terminal by balloons, free cookies and greetings from airport Executive Director Angela Padalecki.

It was a fitting reception for the airline’s official introduction to Grand Junction.

“It was so lovely,” said Tessa Richards, who flew from Burbank for work. “We just discovered this airline, and we couldn’t beat those prices. It was just a great experience. Every staff member from check-in to the plane was friendly and perfect. The plane was super-clean and felt brand new. It was lovely.”

Avelo Airlines is a new, ultra-low-cost carrier that only recently took to the skies. Based in Burbank, Avelo’s first flight took off April 28.

In this phase of the airline’s existence, it has an emphasis on moderately sized western destinations, with Phoenix serving as its only major service.

Avelo also services Santa Rosa, California; Bozeman, Montana; Medford, Oregon; Ogden, Utah; and Pasco, Washington. By the end of this month, it will also fly to and from Eureka and Redding in California, as well as Eugene and Redmond in Oregon.

“I think it’s a real testament to the confidence the airlines have in our market, both now as we come out of this pandemic with the pent-up demand and also moving forward,” Padalecki said. “The fact that our population is growing and the economy is growing is a real testament to the confidence in the market. When you look at the other 10 initial destinations, it’s a group we’re proud to be part of.”

Avelo’s addition is the latest move by Grand Junction Regional Airport to offer more affordable options for flyers. In June, Frontier will join United in offering flights between Grand Junction and Denver.

Now, those wishing to fly to the Los Angeles area will have an alternative to American Airlines’ service to Los Angeles International Airport.

“I think the advantage is that we’re all about giving customers choice,” said Avelo Vice President of Customer Experience Vicky Stennes. “Whether you choose to have some of the seats that have a much greater seat-pitch or more leg room, or opt for some of our extra-low introductory fares –– some of our fares are $19 one-way –– we really think we’re giving customers choice in ease and access. Flying into Burbank, you drive up and boarding the plane takes minutes instead of all of the complications of going through the Los Angeles airport.”

Stennes was one of the passengers on the inaugural flight from Burbank. Few employed by the airline are more excited than Stennes that Grand Junction is one of its first destinations. As a small child, Stennes lived in Grand Junction for a few years.

On Saturday, she returned to her childhood home as an Avelo ambassador.

“This is just a fantastic spot in western Colorado,” Stennes said. “You’ve got so many attractions and adventures, all the way from downtown Grand Junction to being about an hour away from Moab. You have the Grand Mesa and Colorado National Monument. On the other side, back to Burbank, it’s such an easy, smooth little airport as an alternative to Los Angeles. It’s so close to Hollywood and Pasadena and many of the attractions in the area, so we’re really excited about this.”

Later in the evening, the plane returned to Burbank, with numerous Grand Junction Regional Airport officials along for the ride.

Erling Brabaek is the commissioner of the Grand Junction Airport Authority Board and has been an instructor pilot at Colorado Mesa University for more than 30 years. With his latest batch of aviation students graduated and ready to soar on their own, this week seemed like a good week for him and his family of four to get away for a California vacation.

His kids have flown all around the world with him. He couldn’t pass up the opportunity to fly with them on the first Grand Junction-to-Burbank connection.

“I think it’s important for community support when somebody comes in and decides to do this,” Brabaek said. “The bottom line is they have something we want: a ticket to the Pacific Ocean …. The important thing is to connect Grand Junction with the surrounding cities. There’s the ski mountains and the other self-sustaining airports that can cater to the infrastructure, whereas we’re kind of in the middle here. We don’t have a ski mountain, so the fact that we’re pulling in capacities like this is just awesome.”

Avelo’s 737-800s are among the most fuel-efficient aircraft available for commercial airlines, Stennes said.

However, with 189 seats, they’re also among the largest aircraft to grace Grand Junction’s runways.

With low fares, especially in the airline’s early days, as well as an attractive destination, the airport hopes Avelo’s arrival will continue its uptick in air travel.

“It provides additional frequency to our largest market, the L.A. area,” Padalecki said. “Being an ultra-low-cost carrier, it’s bringing in all of that extra capacity at low fares. That’s something we consistently hear from passengers, that the fares here are sometimes out of reach for them and that’s what spurs them to travel through airports other than ours. We’re really excited about the fares, as well.”