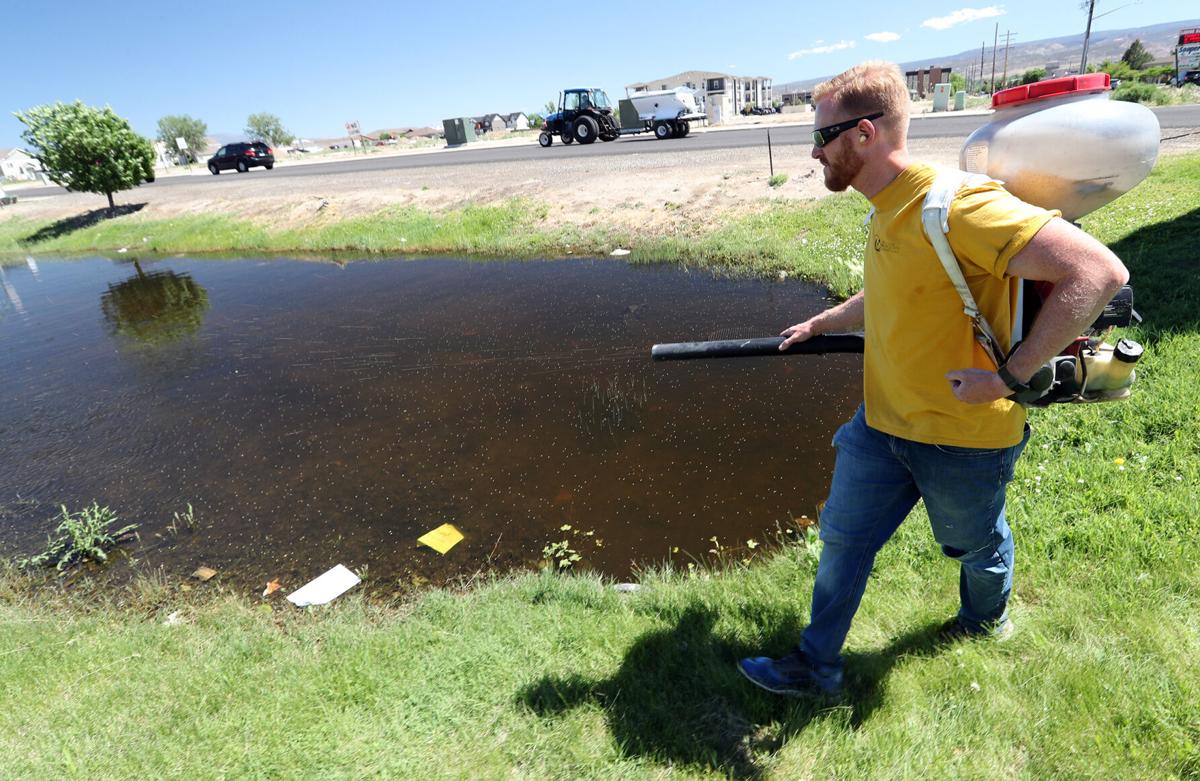 Carter Synhorst, field supervisor for Grand River Mosquito Control sprays around a pond near 24 1/2 and F 1/2 roads for mosquitoes. 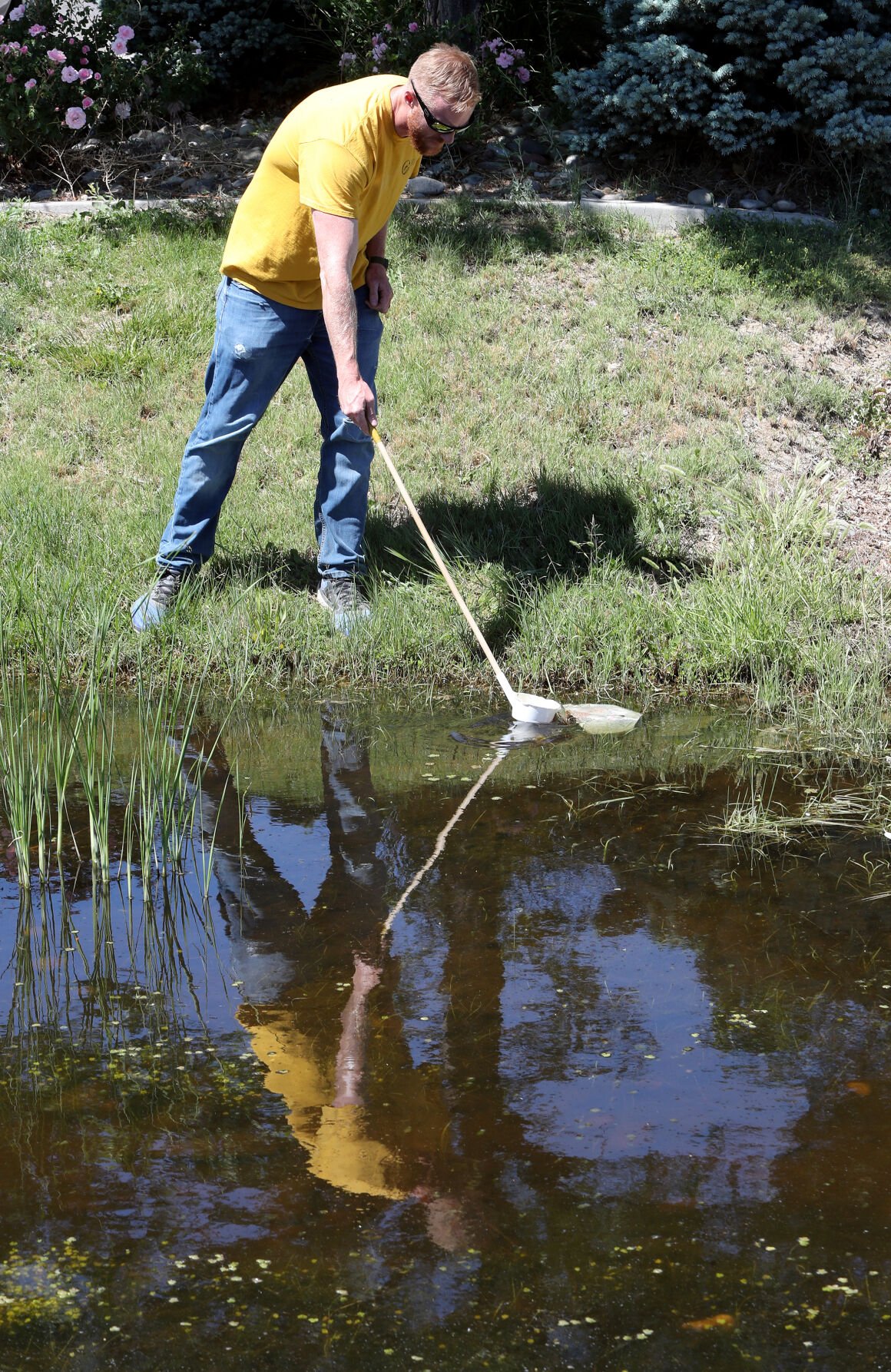 Carter Synhorst, field supervisor for Grand River Mosquito Control sprays around a pond near 24 1/2 and F 1/2 roads for mosquitoes.

Spring is here and summer is coming, and that means hot weather, fun in the sun and those pesky flying inspects.

Yes, this time of year means mosquitoes are on the way.

Whatever it is that makes summer in Colorado special, there is still some element of risk involved while outdoors.

That threat is mosquitoes, who tend to come out around mid-April or early May and generally don’t leave until mid-October. Tiny in size, yes, but not in regards to their significance as a threat to human health.

“The mosquito has killed more people than any other cause of death in human history ... the mosquito has dispatched an estimated 52 billion people from a total of 108 billion throughout our relatively brief 200,000-year existence,” writes Timothy Winegard in his best-selling book :The Mosquito: A Human History of Our Deadliest Predator.”

While these insects haven’t killed scores of people in Mesa County in recent history, they are still a danger to people.

Winegard, an author and assistant professor of history and political science at Colorado Mesa University, also notes that it is not necessarily the mosquito itself that poses a threat to humans, but rather the diseases they carry.

“... the mosquito does not directly harm anyone. It is the toxic and highly evolved diseases she transmits that cause an endless barrage of desolation and death. Without her, however, these sinister pathogens could not be transferred or vectored to humans ...,” Winegard writes.

The most prominent of these diseases in the region is the West Nile virus, which has been a public health issue in Mesa County since 2003, with 286 cases having been recorded between that time and now.

Statewide, there have been a total of 5,662 confirmed cases of West Nile virus since 2003, with 145 deaths coming as a result of the disease, according to the Colorado Department of Public Health and Environment.

While Mesa County has seen an overall downward trend in cases in the past few years, precautions are still being taken in an attempt to keep that number low.

The Grand River Mosquito Control District has hired 13 seasonal employees (with hopes of hiring two to three more), for the 2021 mosquito season. The employees cover a 150 square-mile area that includes everything from Palisade to 15 Road and all the irrigated areas in the valley, from Orchard Mesa and the Redlands to the south to the Highline Canal in the north. They’ve been trained to look for mosquito larva.

“We spend 90% of our time looking for mosquito larva. We have about 10,000 different sites we look at every week and if we find larva in those sites, we treat that larva with a mostly naturally occurring bacteria that kills the mosquito larva upon ingestion,” says Tim Moore, district manager of the Grand River Mosquito Control District.

According to Moore, the cooler temperatures around the valley this spring have contributed to fewer larva sightings.

“We set up 92 different adult mosquito traps throughout the entire district and we monitor those on a weekly basis. What that helps us understand is the location of where larvae are hatching that we may have missed and it also helps us understand what types of mosquitoes we’re catching. There are about 26 different species of mosquitoes in and around the Grand Valley.

Of those species there are a couple that are able to transmit the West Nile virus,” Moore said.

Despite West Nile being a threat of lesser significance in recent years, it still remains a viable threat to human health in not just Mesa County but the entirety of the state.

‘MY BRAIN WAS FOGGED’

Kim Beauprez, a Colorado native, got West Nile virus back in 2015, she believes while she was on a golf course. She claims to only have been bit by one mosquito that evening.

It was a debilitating ordeal for her.

“The worst part of West Nile (for me) was the neurological effects that I had. My brain was fogged. I had a tremor. I was nervous. It really hit my central nervous system,” she said. “My neck was stiff. My entire body ached and it lasted for 6 months solid. I was really sick for a year. I did not work and hardly left my house for a year.”

She says that she can still feel remnants of the virus that flare up from time to time, mostly when she is stressed, sleep deprived, overworked, or after having consumed processed foods.

The West Nile virus seems to be in a decline around the state. The Grand River Mosquito Control District partners with the Mesa County Public Health Department and the Colorado Public Health and Environment each year.

They collect samples of mosquitoes in Grand Junction which are later sent to Denver to be tested for West Nile virus. Essentially, the goal is to pinpoint the location of mosquitoes carrying West Nile in order to treat them.

As of last year, zero mosquitoes tested positive for the virus.

Still, people should take the proper precautions while recreating outdoors this summer.

“I never thought it would happen to me,”Beauprez said.

“It wasn’t even on my radar that West Nile was still a thing. I had mostly heard about it in 2003-2006. However, West Nile is still around, and people should be aware.

“I thank God everyday I did not end up in a wheelchair as so many people have, or even did not live through this disease/virus,” Beauprez said.