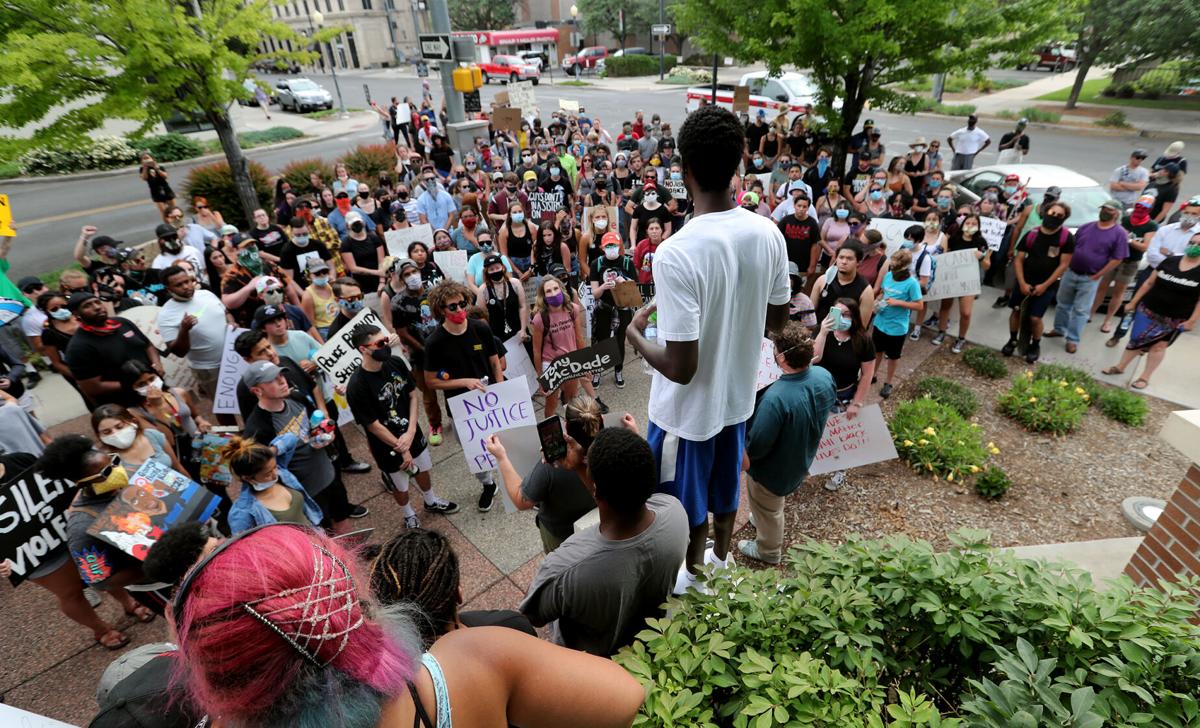 In this file photo from June 3, 2020, about 200 people gathered at Grand Junction City Hall prior to a Grand Junction City Council meeting. Since that day the Grand Valley Task Force was formed to foster conversations and solutions to racial issues. 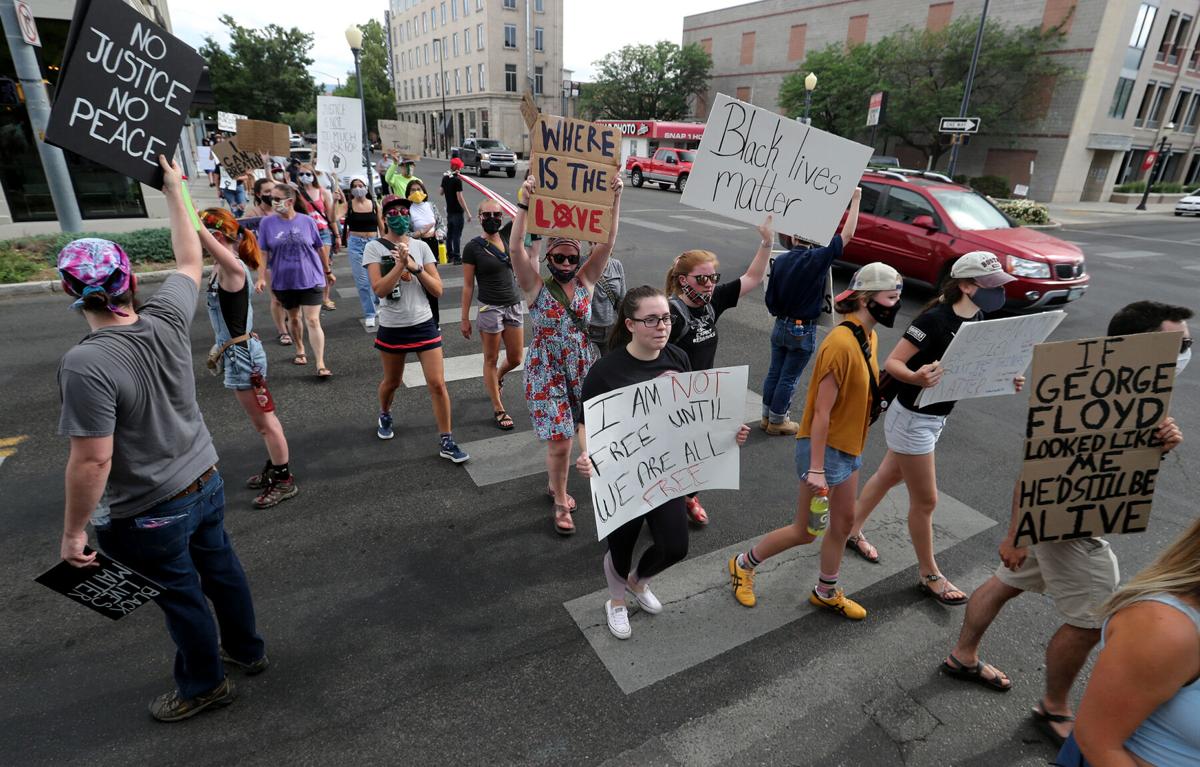 About 200 people meet at the Grand Junction City Hall Wednesday evening for the city council meeting. Here meeting in front of city hall. 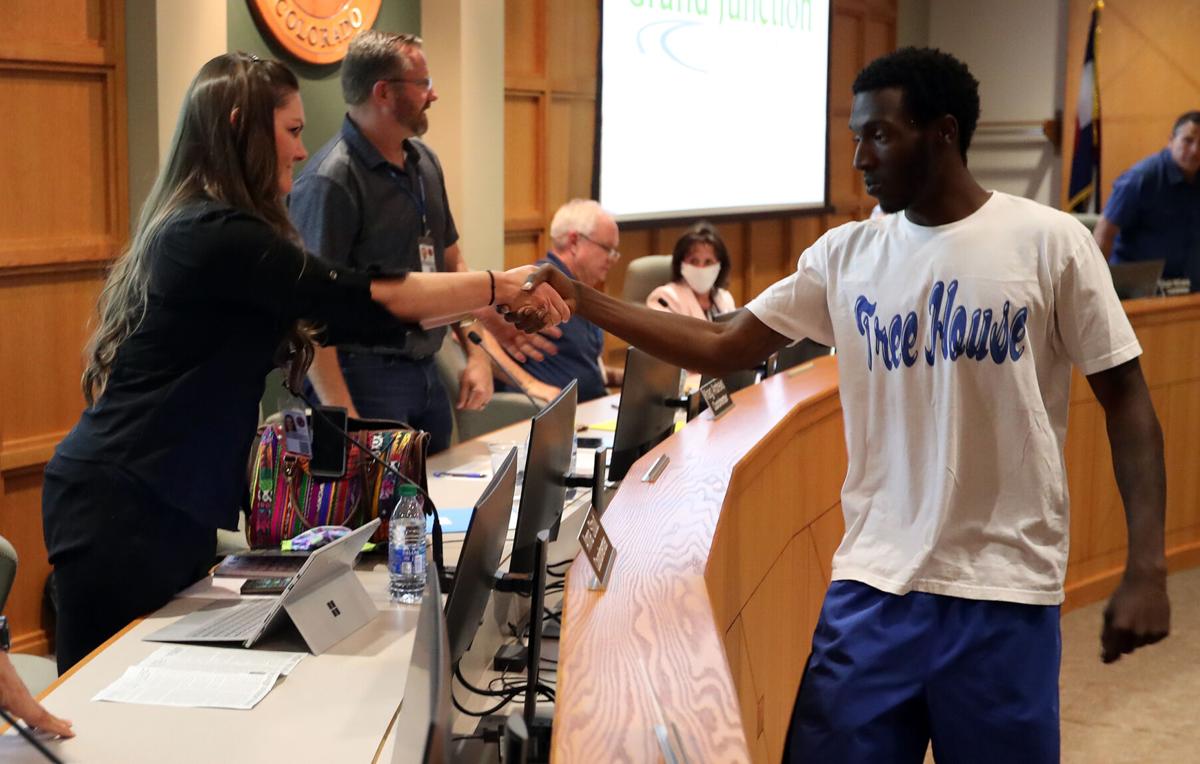 About 200 people gathered at Grand Junction City Hall on Wednesday evening before the City Council meeting.

In this file photo from June 3, 2020, about 200 people gathered at Grand Junction City Hall prior to a Grand Junction City Council meeting. Since that day the Grand Valley Task Force was formed to foster conversations and solutions to racial issues.

About 200 people meet at the Grand Junction City Hall Wednesday evening for the city council meeting. Here meeting in front of city hall.

About 200 people gathered at Grand Junction City Hall on Wednesday evening before the City Council meeting.

Wednesday evening the Grand Junction City Council sat before an audience filled with African American members of the community there to speak about their experiences with racism in Mesa County and to call for action.

Most of those in the audience had taken part in a protest march, which drew hundreds of participants to City Hall prior to the meeting, one of many that have been held in the city in the wake of the killing of George Floyd, an unarmed black man, by a Minneapolis police officer.

The council welcomed about 30 of the marchers for its pre-meeting to listen to the council discuss a statement addressing the concerns of the black community. However, questions from the audience made clear the council would need to do more.

At the regular meeting the council allowed all 72 seats to be occupied by audience members, temporarily suspending COVID-19 restriction for social distancing. Many in the audience relayed ideas for moving forward, specific demands for action and describing incidents of racism they experienced in their lives.

Note: we do not have space to quote all who spoke, but we encourage readers to visit gjcity.org/city-government/agendas-and-minutes/ to view video of the entire meeting.

Jay Bishop was one of the leaders of the march and he called for action from city leaders. He made specific requests including forming a committee with local leaders, police and members of minority communities, having police visit minority communities for a dialogue and for city leaders and police to join with protesters for a march on Friday.

Many spoke to issues in the wider community, including the use of racial slurs and bullying at District 51 schools, issues with athletes being punished for protesting at Colorado Mesa University and of community members shouting racial slurs at protesters this week. Some referenced a past comment from council member Phyllis Norris downplaying racism as a problem in Grand Junction.

“Why we’re here today is because there is systemic institutional racism, institutional,” Ta’Lor Jackson said. “So if we want to make changes we have to start making changes to our institutions, which includes you that are sitting in front of us. It’s not just about law enforcement. It’s about our local representatives.”

Anthony Hinkle discussed the relationship between people of color and police within the city of Grand Junction and Mesa County. Hinkle, echoing comments from Bishop, said he thought a dialogue between law enforcement and minority communities could help reduce fear on both sides.

“It’s hard to sit here and pull someone over who you don’t know, you’ve never met and now you’ve got your hand on your gun,” Hinkle said. “Now I’m worried about my life. Versus if you sat here and took the time, come out to the community, sat here and met me, shook my hand and look me face to face and see my story and where I come from you won’t have to fear for your life.”

Outside council chambers, more people who took part in the earlier march stood demanding to be heard.

“It makes me upset... They’re not coming and listening to us. We have to approach them on their podium,” Marcus Alexander said. “Why do we have to do this?”

City Council members mostly stayed quiet during the public comment, writing notes, as is the normal procedure at meetings, with the exception of Mayor Duke Wortmann who said the city would work to take the action Bishop and others asked for. However, during the pre-meeting the council did engage in some back and forth with the audience members.

During that time, members of the audience asked about the process going forward, what the council had done in the past to address this issue and why there weren’t more community leaders there that evening.

Wortmann said the first step would be to hear them speak during the regular meeting and weigh how to address their concerns. Mayor Pro Tem Kraig Andrews offered his business cards and said they could meet in a more comfortable setting to discuss the issues. Council member Chuck McDaniel suggested a committee be formed including members of minority communities, which Bishop said had been one of their requests. Council member Anna Stout said she had invited the group to attend the meeting and that they wanted to hear the council’s discussion about a potential statement on the issue.

Council member Phillip Pe’a said he was sure those who marched to City Hall were there for many reasons, including to see some progress made.

Mesa County resident David Combs, a longtime organizer, urged those at the pre-meeting to follow through and keep working to make the change they were demanding.

“They want to start a committee. How many of you in this audience want to be part of that committee? That’s what’s important,” Combs said as a flurry of hands shot up to volunteer. “Please, please simply because you raise your hand now, don’t come up with an excuse not to be there later.”

Combs talked about the process going forward and that those who want change would need to not only engage the City Council, but leaders across the valley from Mesa County to District 51.

In his public comments during the regular meeting Combs spoke about his personal connection to Minneapolis, where he grew up, and how it wasn’t that different then from Grand Junction now. He acknowledged all the stories of racism from within the community and how in order to make change, they would need collective action.