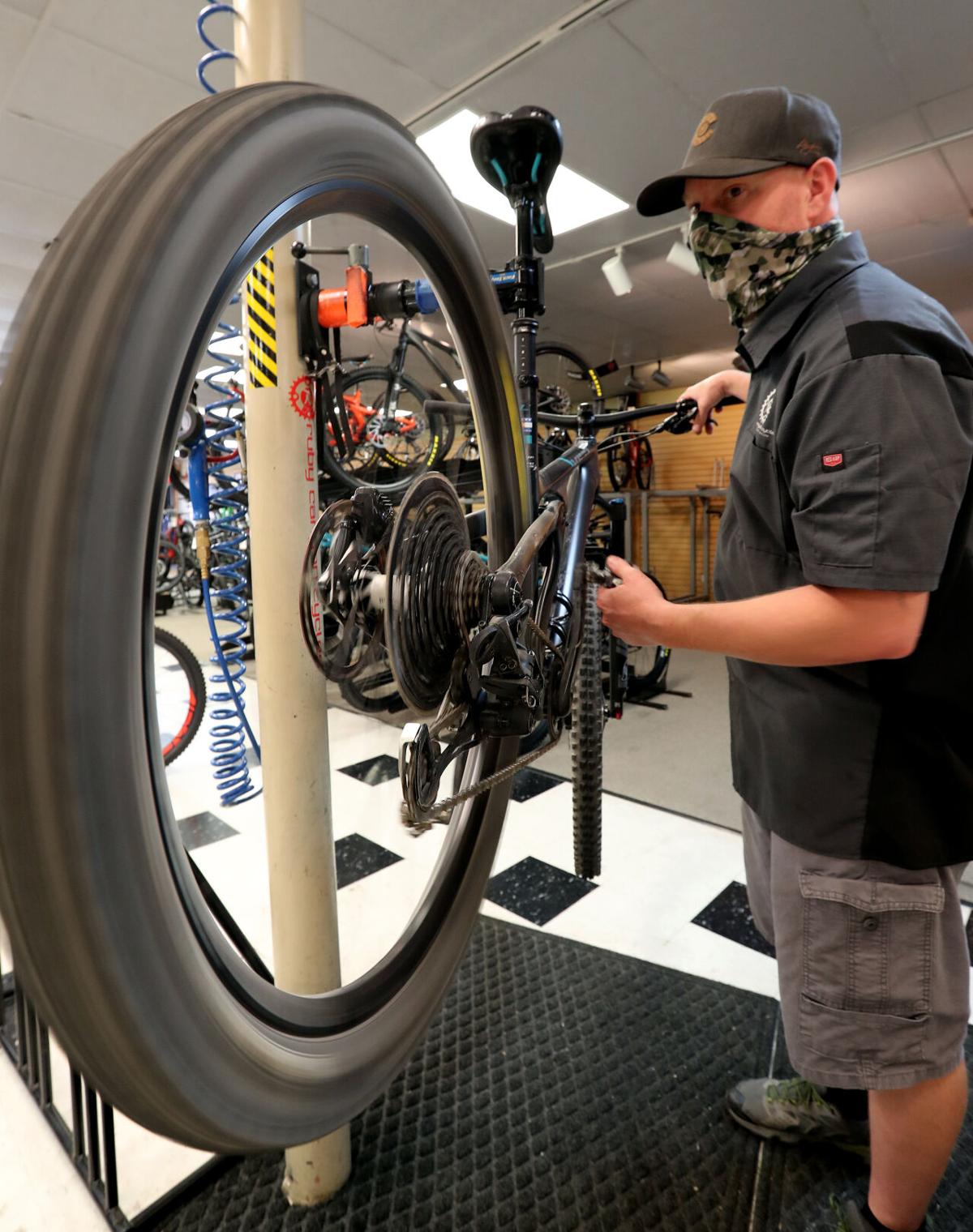 Diers, working on a bike at Ruby Canyon, says that his shop now has a full supply of entry-level bicycles, as well as the premium brands. 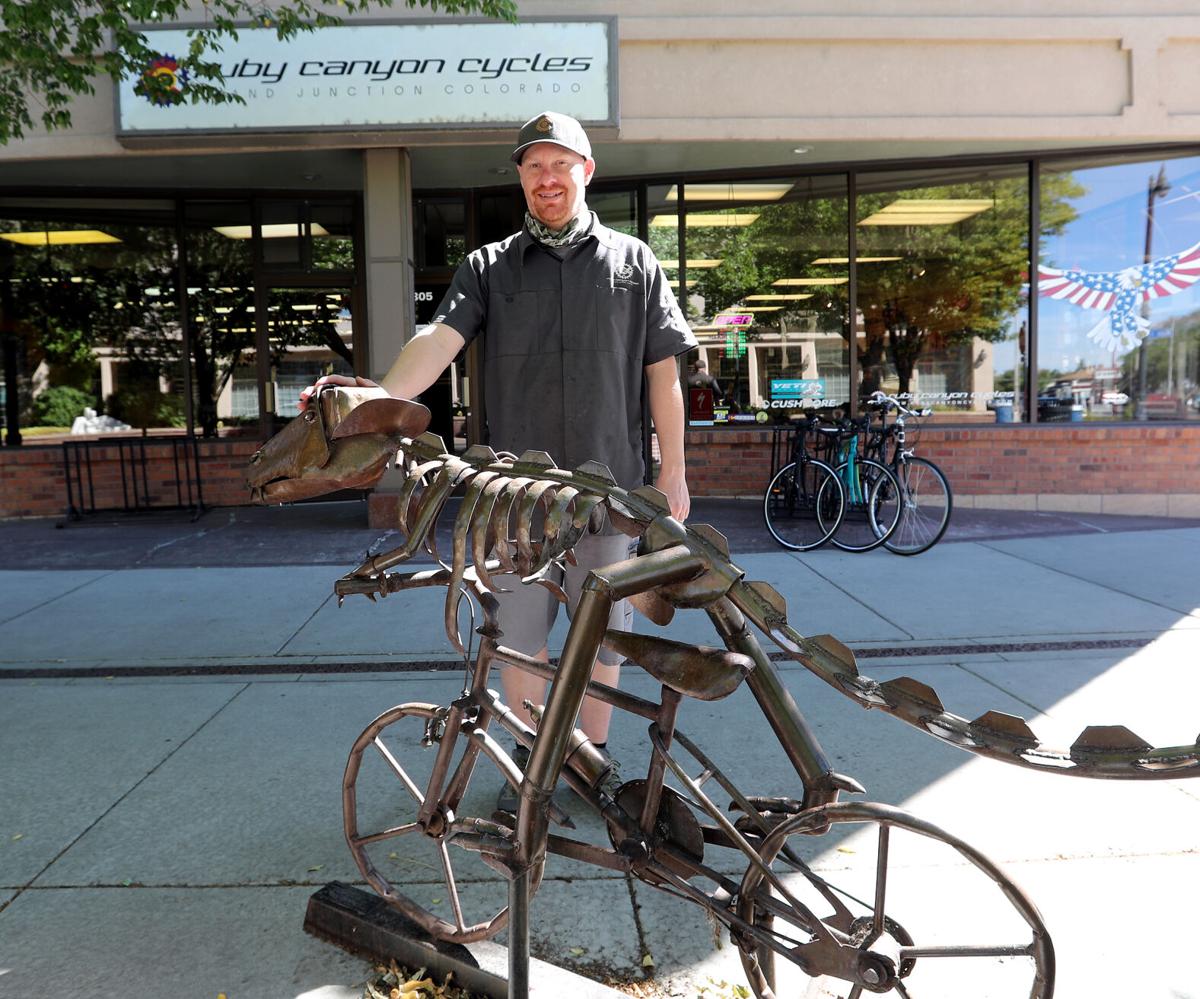 Chad Diers, manager at Ruby Canyon Cycles on Main Street in downtown Grand Junction, stands outside the shop with a bike-riding dinosaur creation.

Diers, working on a bike at Ruby Canyon, says that his shop now has a full supply of entry-level bicycles, as well as the premium brands.

Chad Diers, manager at Ruby Canyon Cycles on Main Street in downtown Grand Junction, stands outside the shop with a bike-riding dinosaur creation.

Bicycle stores are facing a nationwide shortage of parts and bikes to sell, but local shops say business is still up thanks to the high demand.

Ruby Canyon Cycling Manager Chad Diers said the stay-at-home orders during the spring in response to the coronavirus pandemic led to more people turning to biking for recreation.

“You had millions of people that bought bikes and bike parts that normally wouldn’t have because, with all the stay-at-home orders, you had all these people with all this excess time,” Diers said. “They just wiped out this whole year’s worth of supply.”

The problem was made worse as countries that manufacture much of the bike industry’s products had to close factories for several months leading to an interruption in the supply chain.

“For four months we weren’t able to get any entry-level bikes,” Diers said. “We were sold out and all of our distributors were sold out. For quite a few months our least expensive mountain bike in the store was almost $5,000. Now we finally are just in the last two weeks getting $500, $600, $700 bikes in.”

Kirk Brosius with Over the Edge Sports in Fruita said business has picked up since they began renting bikes again in July. Brosius said they had refrained from renting bikes until mid-July because of concerns related to the coronavirus. To make up for that, he said they had been selling demo bikes and doing a lot of repairs.

“Popularity of bikes seems to have exploded with people getting bikes out of their garages or their attics that they’ve had in storage for a while,” Brosius said. “They often require a bit of attention, but we have not had to turn anyone away.”

Since new bikes were hard to come by, Diers said they also had seen more older bikes coming in for repairs and tune ups. He said that has led to even simple parts like tubes for certain tire sizes selling out.

“That’s where a lot of people turned to if they couldn’t buy any entry-level bike because every shop in the country was sold out of them,” Diers said. “Then they started buying bikes at yard sales or just buying second-hand bikes elsewhere and bringing them into shops to be repaired. We’re seeing a huge influx in standard components that are selling out because people are repairing these old bikes.”

Brosius said some bike suppliers have said they won’t be supplying new bikes until early next year.

Diers said he expects it to take a full year for the supply chain to get back to normal.

Despite these challenges, both stores are seeing better than average business compared to previous years and customers have told them they are happy they are open.

“Overall, everybody has been grateful that we’re here,” Diers said. “To a lot of people, cycling has been their escape, if you will. Early on, the CDC recognized cycling as being a healthy alternative during all the stay-at-home orders and lock downs. I think it’s been kind of mental therapy to be able to get outside and get into the outdoors.”