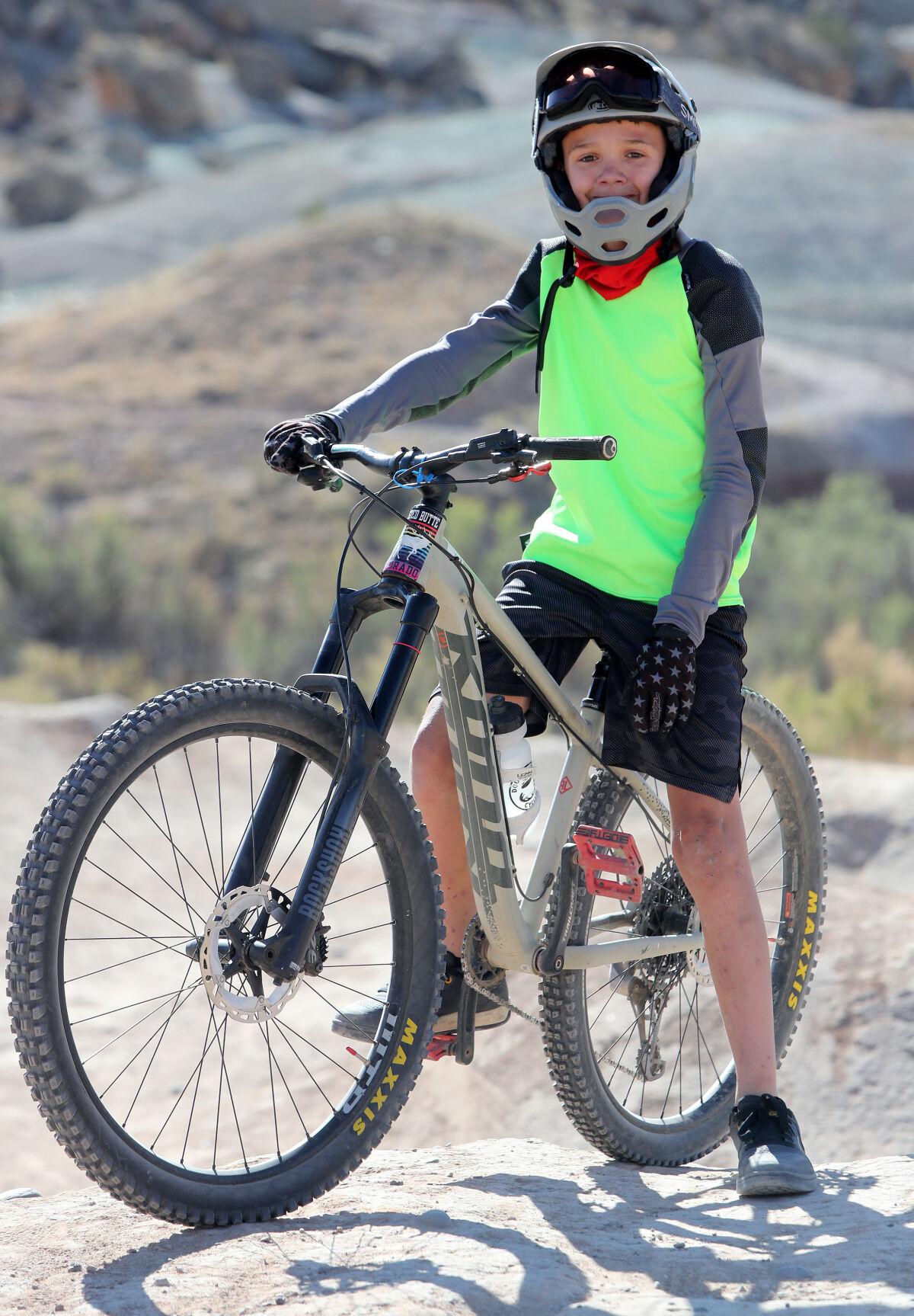 James Stucky, a seventh-grader at Caprock Academy, wears his Bulldog Protective Gear line of products as he rides his mountain bike at Lunch Loops. 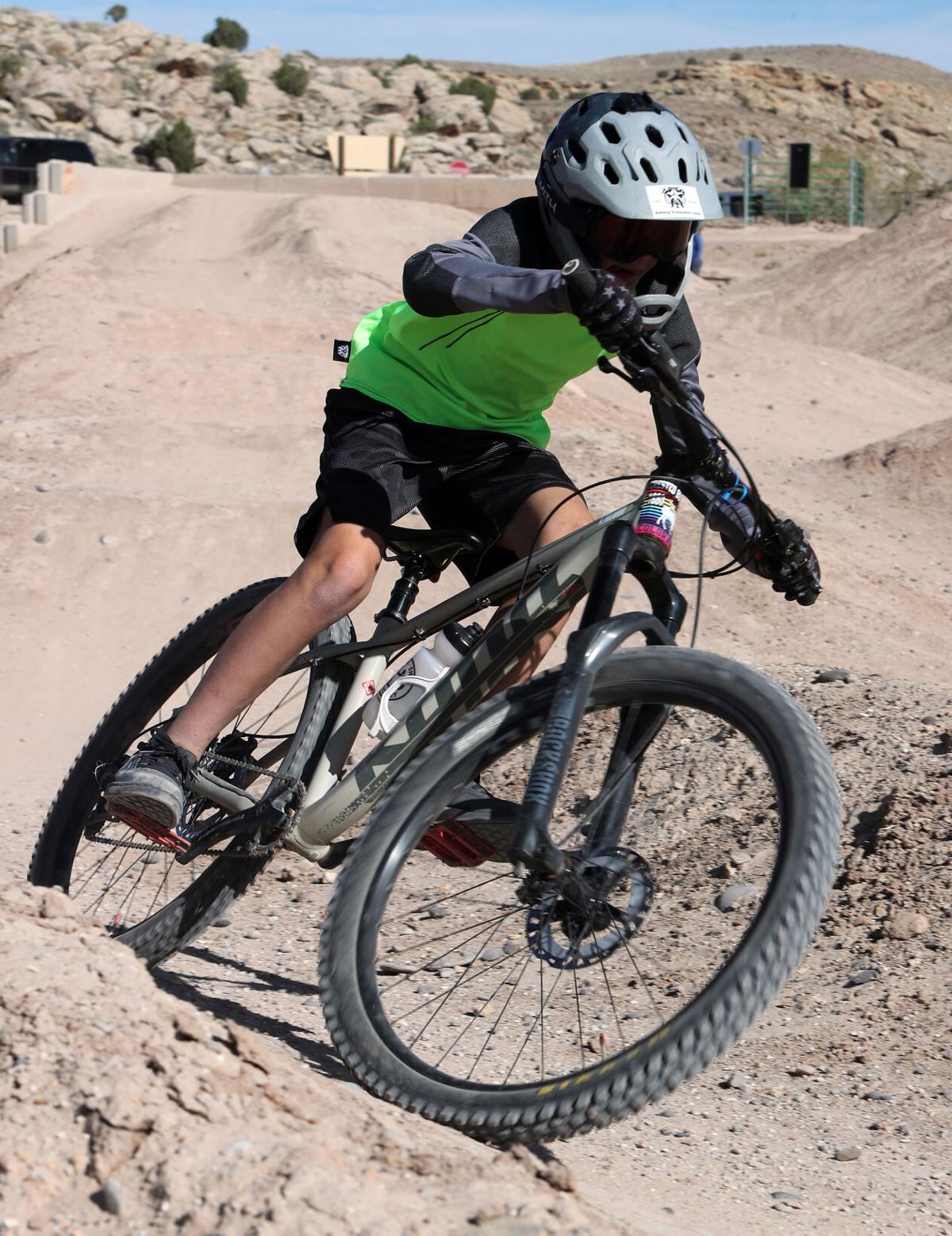 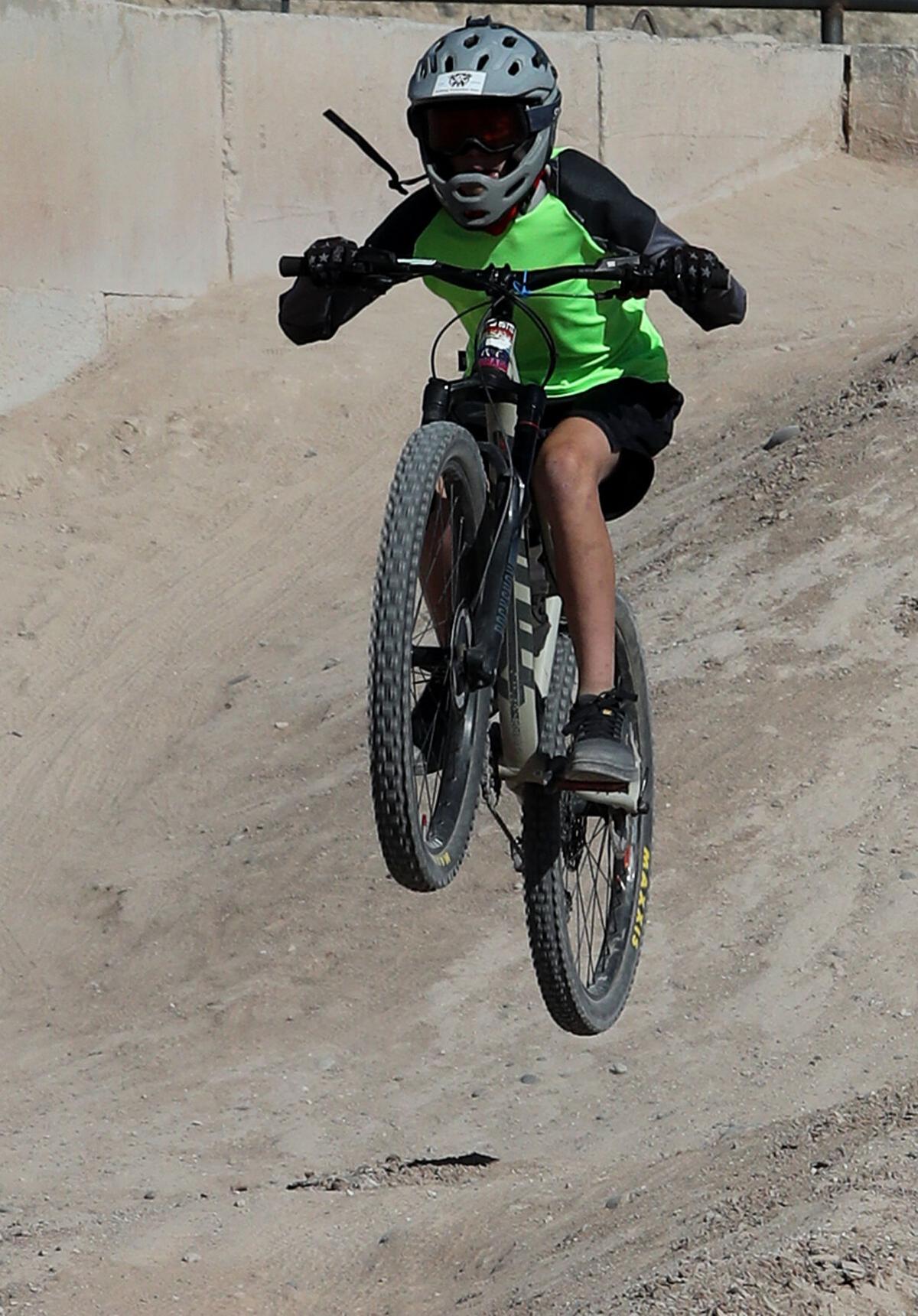 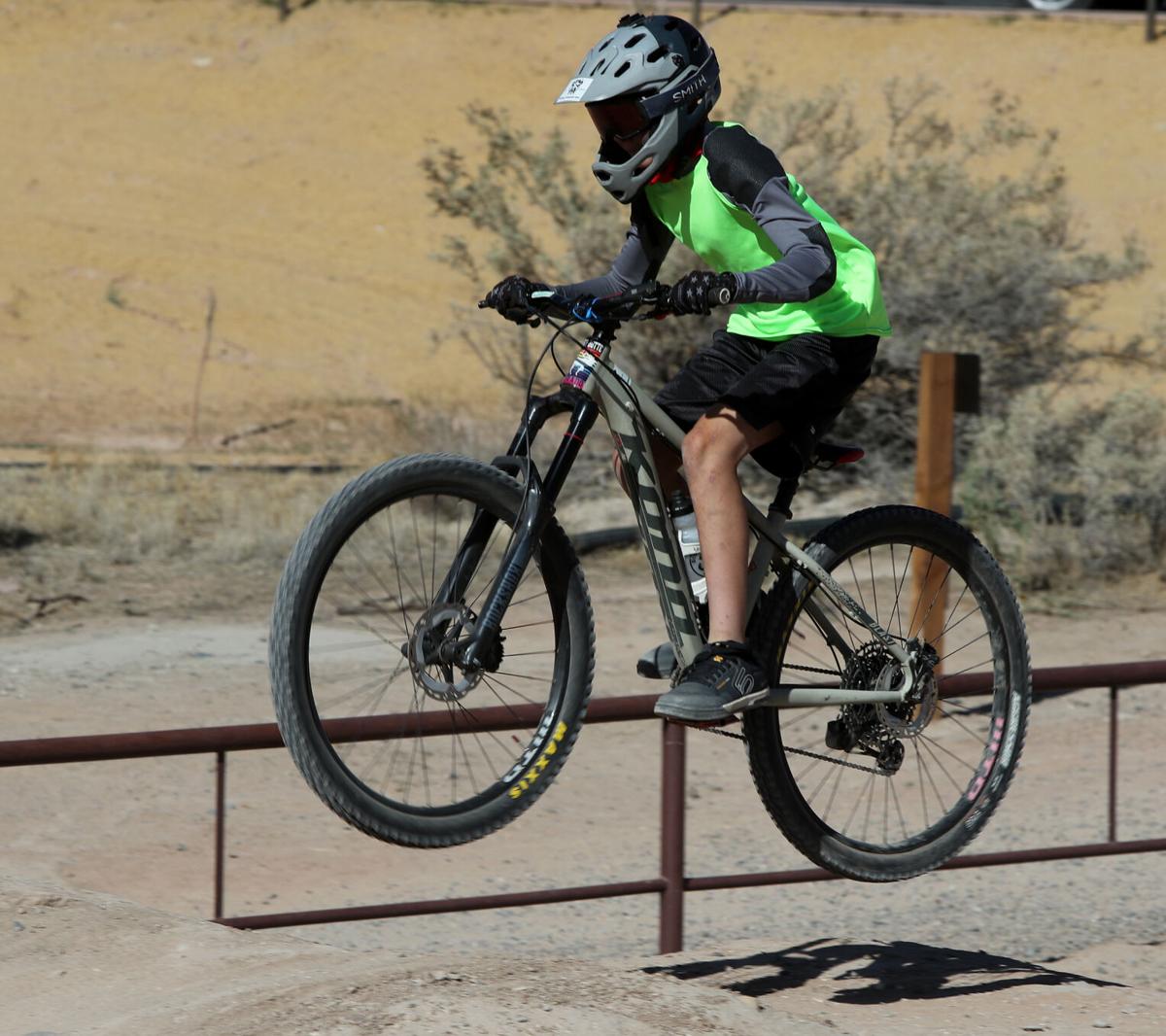 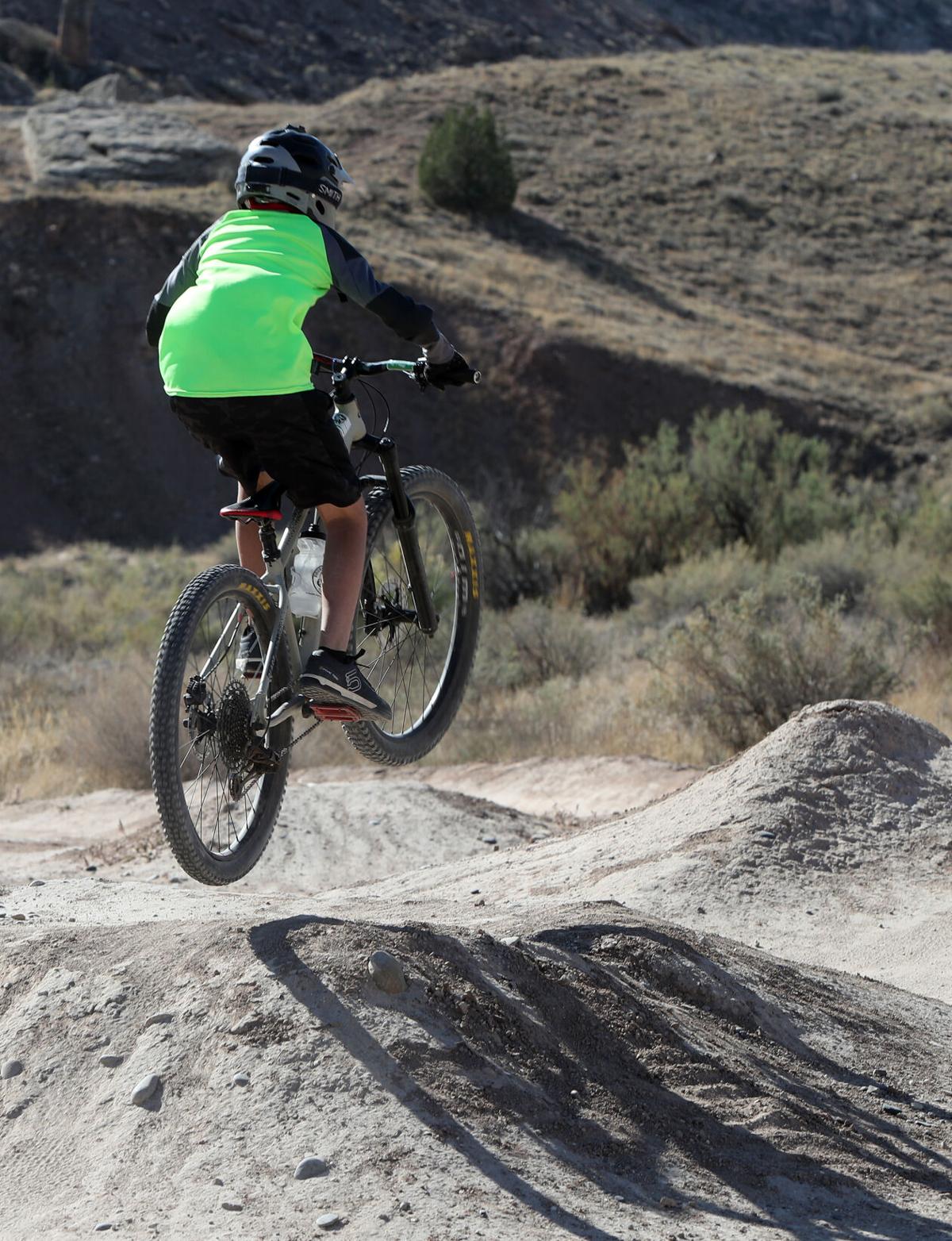 James Stucky, a seventh-grader at Caprock Academy, wears his Bulldog Protective Gear line of products as he rides his mountain bike at Lunch Loops.

James Stucky fell hard on his left shoulder while mountain biking a couple weeks ago.

When he popped up from the crash, “everything hurt except my shoulder,” the Caprock Academy seventh-grader said, with a shy, confident grin.

That was because of his shirt, which is one of just several that currently exist. The breathable, lime-green fabric in front and back catches the eye, but it’s the shoulder and elbow panels Stucky really wants you to notice.

The material for those panels is SuperFabric made from ceramic plates, and the look of its texture reminds Stucky of an armadillo shell.

Filling the panels is Poron XRD, a soft, flexible padding that hardens on impact, said Stucky, who spent most of the past year researching and creating a unique kids mountain biking shirt and the start-up business Bulldog Protective Gear.

The 12-year-old participant in the Young Entrepreneurs Academy (YEA!) was selected by local judges and investors earlier this year to advance to the Saunders Scholars National Competition on Saturday and compete to be named America’s Next Top Young Entrepreneur.

The national competition usually takes place in Rochester, New York, in May. However, because of COVID-19, it was postponed and moved online, which means anyone in the Grand Valley can now watch as Stucky and other youth from around the country pitch their ideas and businesses to judges.

Along with vying for $80,000 in cash prizes and scholarships to Saunders College of Business at the Rochester Institute of Technology, there is a $2,000 cash prize People’s Choice Award voted on by the online audience via text messages.

The competition will begin at 10 a.m. Saturday with semifinal rounds and continue with the final rounds in the afternoon. It can be viewed live through YEA!’s YouTube channel and on Facebook.

Each pitch will be three minutes long, a change from the five minutes competitors previously got. For Stucky it meant condensing his talking points and ditching his PowerPoint presentation.

Some of his jokes had to go too, but he saved two lines he really likes: “Why Bulldog Protective Gear? Because bulldogs are tough and cute like me.”

And then comes that shy grin. He’s ready for Saturday, however, he’s nervous.

During the local competition in March, Stucky held his cue cards steady, but “my legs felt like they were shaking with an earthquake or something,” he said. “I don’t like speaking.”

Now mountain biking, that’s another matter. “Me and my friends do a bunch of dumb stuff at the bike park,” he said while his mother, Amanda Stucky, looked on in complete agreement.

Last fall, a crash flipped a friend over his handlebars and it made James Stucky think about the business possibilities in safety gear. At first, he thought about making better bike pads for kids. He has two younger siblings — Emery, 8, and Sawyer, 5 — and knows all about how bulky bike pads annoyingly slip down skinny arms and legs.

His mom mentioned it would be cool if the bike pads couldn’t come off, if they were somehow built into a shirt instead.

That sent Stucky online to see if anyone else had thought of this. He found a shirt, but the pads stuck out pretty far “and they only come in one color, which is kind of boring,” he said.

He knew he could come up with something better, and so some intense research began with a lot of help from his mom and dad, Robert Stucky.

They learned about fabrics, padding, shirt design and sewing — none of them knew how to sew. But James’s grandma is a seamstress so she was able to guide them, but they still had to do all sewing. “I thought it would be pretty easy,” Stucky said.

It wasn’t. Each shirt has 23 pieces and even now it takes about four and a half hours to make just one, he said.

By November, he had a prototype and redesigns came quickly, however Stucky also had schoolwork and other things going on. So his Christmas break was dedicated to Bulldog Protective Gear.

He got to stay up until midnight quite a few nights and actually was allowed to drink coffee for the first time, he said rather proudly. He likes his coffee “plain dark.”

He decided to use the English bulldog for his business logo because his two other favorite dogs, the pug and the jug, weren’t tough enough.

Shirts were made for several of his friends and they put them to the test while mountain biking and taking some falls at areas from Powderhorn Mountain Resort to Fruita. Stucky was pleased with how his gear held up.

After he was declared the winner in the local YEA! competition, he was initially dizzy and then ecstatic, he said.

With the backing of local investors, Stucky and his dad began looking for a potential manufacturer for Bulldog Protective Gear. Those they have contacted so far have either been too busy making masks or trying to survive and couldn’t take on another project, Amanda Stucky said.

That hasn’t stopped James Stucky from thinking ahead to what is next for Bulldog Protective Gear even beyond the national competition.

Along with selling his shirt at an $80 price point, he wants to add mountain biking shorts and look into snow gear. He also would like to learn to ski this winter.

“Seeing him go through this process is pretty phenomenal,” Amanda Stucky said. “The YEA! program is an amazing program.”

The nine-month program is presented by the Grand Junction Area Chamber of Commerce and through it her son has learned about business, time management, deadlines, public speaking and more.

He has even worked on his own promotional video — view it at youtube.com/watch?v=Pbobnl-Unro — and a professional promo with Lightbulb Media will be released soon.

Saturday’s online competition will likely be more nerve-racking for James Stucky than making those promos.

He’ll be one of the first to make his pitch to judges and he wouldn’t mind getting plenty of local votes for the People’s Choice Award.

Go to yeausa.org to register to text-to-vote for the award and to find links for watching the competition.

The competition begins at 10 a.m. Saturday with semi-final rounds and final rounds in the afternoon.

To view: Go to yeausa.org to see viewing options.