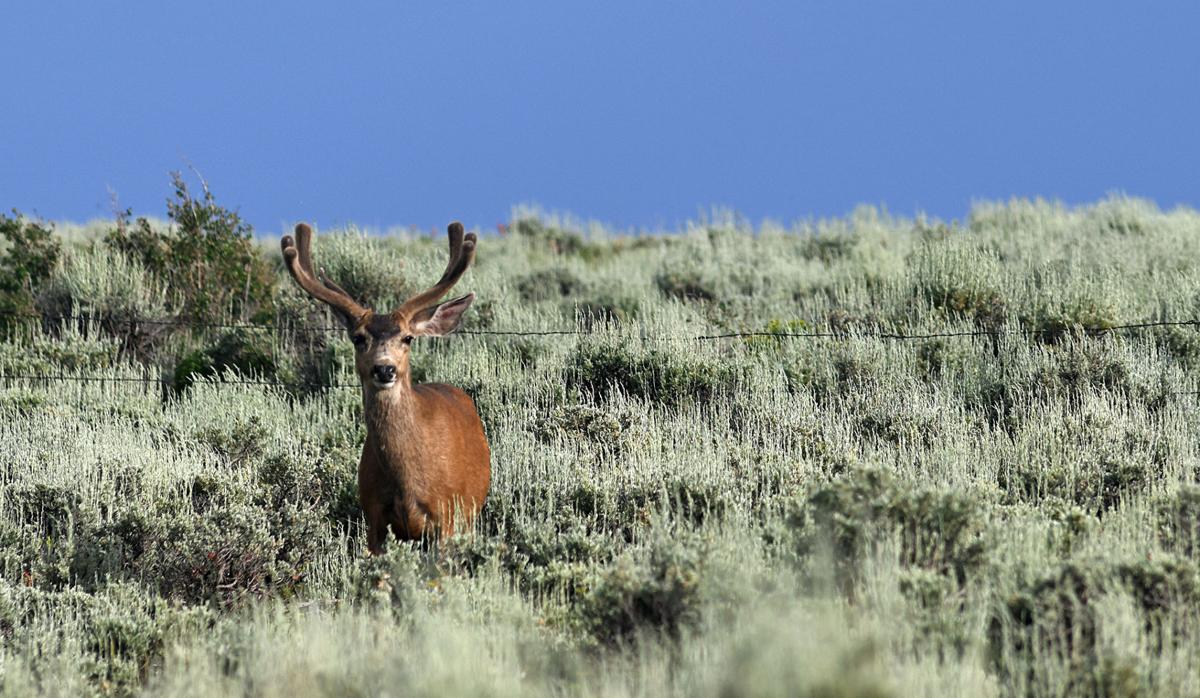 A mule deer buck with the velvet still on his antlers stands in the sage between a fence line and the Blue Mesa cutoff road on the Ute Mountain Ute Reservation south of the reservoir. Bucks shed their antlers every year in February or March. As the antlers grow back, they are covered in a fine tissue known as velvet that supplies the new growth with blood. Once the antlers are fully grown, the deer will rub them against trees to remove the velvet. 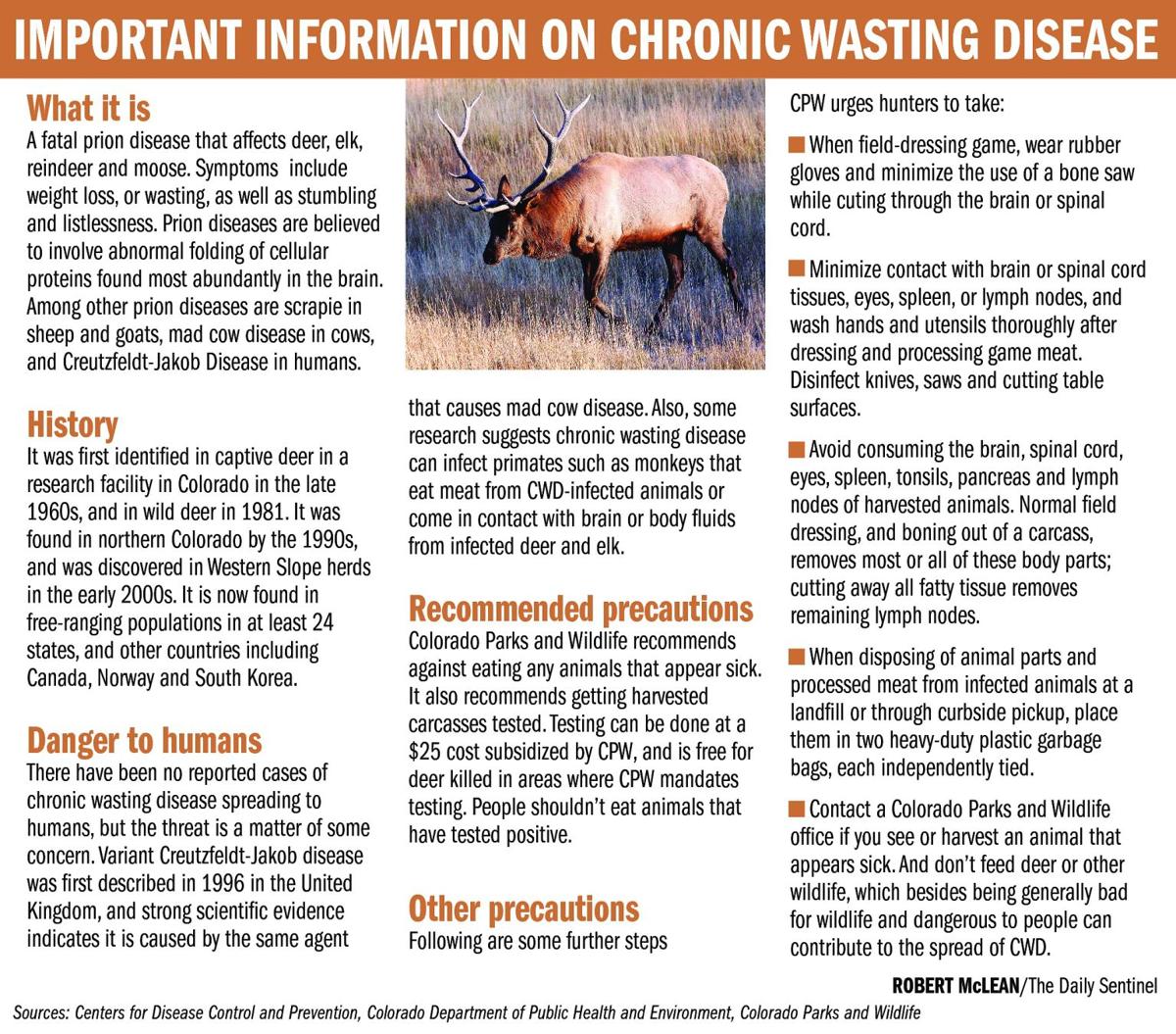 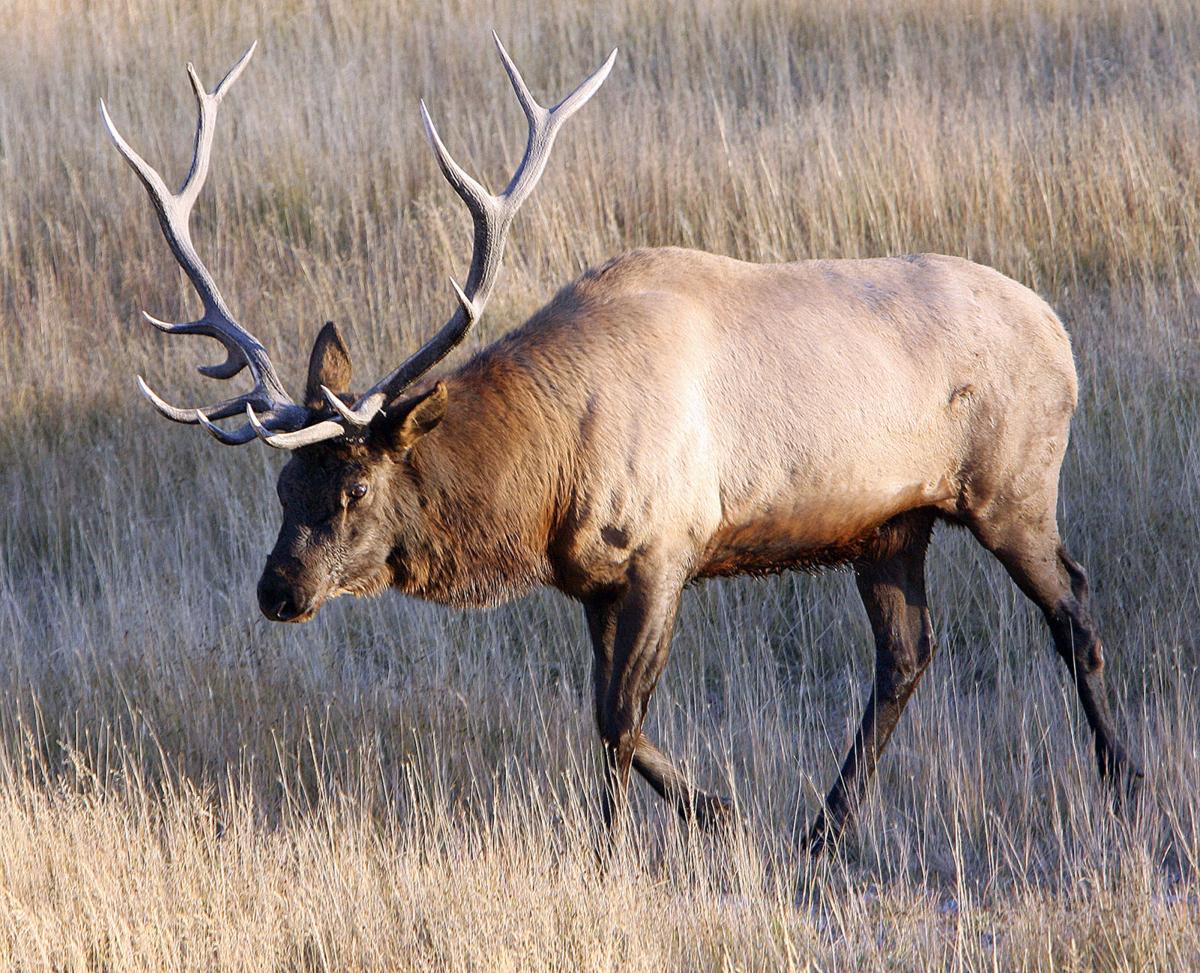 Elk are not as susceptible to chronic wasting disease as deer.

A mule deer buck with the velvet still on his antlers stands in the sage between a fence line and the Blue Mesa cutoff road on the Ute Mountain Ute Reservation south of the reservoir. Bucks shed their antlers every year in February or March. As the antlers grow back, they are covered in a fine tissue known as velvet that supplies the new growth with blood. Once the antlers are fully grown, the deer will rub them against trees to remove the velvet.

Elk are not as susceptible to chronic wasting disease as deer.

At the worst, a malady spreading in Colorado's deer herds could threaten human health.

At the least, what's called chronic wasting disease is threatening the herds' long-term sustainability, and Colorado Parks and Wildlife officials say they are responding in a way that recognizes the gravity of that threat.

The agency is acting with new urgency in recent years after testing results indicate an increased incidence of the always-fatal disease in several herds. This includes a disconcerting tenfold increase in the White River herd, which is centered around Meeker and is one of the state's largest in terms of population and geographic area.

Mandatory testing wildlife officials required of hunters in 2017 for male deer taken in that herd area showed a 15.3% prevalence of the disease among tested animals, compared to just 1.5% in 2003. Prevalence in two other herds was 12% and 10%, respectively.

"We were quite alarmed to see the kind of prevalence (of CWD) we've seen in the last couple years. That raises its priority quite a lot in my mind," said Brad Petch, senior biologist in northwest Colorado for the agency.

The agency has responded through the recent adoption of a response plan focusing on rotating mandatory testing between herds, and tweaking hunting levels as warranted to try to keep the disease in check, while not falling below the lower end of population range objectives identified in existing herd management plans.

Jay Purkey, who with his son Jason owns a meat processing facility in Meeker, worries that the disease may be an even bigger issue in the area than the wildlife agency thinks. He said he knows of an outfitter who took four deer hunters on private guided hunts last year. Three of the four deer they killed tested positive for chronic wasting disease.

"I think it's more prevalent than (wildlife officials) think up here," he said.

He said he's seeing a growing numbers cases of animals coming into his plant that turned out to have the disease.

"I think they've got a problem and they don't know how to fix it," Purkey said of Parks and Wildlife.

But Matt Dunfee, who directs the Chronic Wasting Disease Alliance and sat on an advisory board that helped the agency draft its plan, said before its approval by the wildlife commission that too many other plans he's seen don't have enough scope, don't last long enough and don't provide information that allows the state to learn and adapt over time.

"This plan does all three," he told the commission.

Keith Roehr, who is Colorado's state veterinarian and also served on the advisory board, told the commission, "I think the plan is resourceful and it should give us the appropriate tools and actions to be effective in Colorado."

could have major impact

Chronic Wasting Disease could have significant impacts on populations if left unchecked. Petch said states with very high rates of the disease are having real difficulties managing their deer.

"I think that shows the future if we don't act on this disease," said Petch, who added that it's an issue that "will be with us for decades."

It's a prion disease that affects the brains of deer, elk, moose and reindeer and results in weight loss and other symptoms. As of July 2018, at least 31 of Colorado's 54 deer herds were infected with the disease, along with 16 of 43 elk herds and two of nine moose herds, Parks and Wildlife says. But the main issue involves deer herds, which tend to be more heavily infected than elk herds living in the same area. The disease is relatively rare in moose in the state.

The disease is not yet known to threaten humans, but researchers continue to investigate that possibility, and agencies such as Parks and Wildlife urge hunters to take precautionary measures such as having their game meat tested and not eating diseased animals.

Chronic wasting disease occurs far more commonly in adult than young deer and about twice as frequently among bucks than does. That's one reason the agency focuses its monitoring efforts on adult males, along with the fact that annual hunting harvests of males provide larger and more consistent test samples. A key component of the new response plan is to use hunter harvest management as needed to reduce the disease's prevalence rate among adult males in a herd below 5%. The agency also plans steps to keep prevalence rates below that level where it hasn't yet risen above it.

Petch said 5% appears to be something of an "inflection point," with prevalence rates starting to increase much more quickly once they reach that point.

The disease's growth among deer herds comes at an already concerning time for the state of Colorado's mule deer population. Wildlife officials say that animal's numbers have been in long-term decline in the state. In 2014, a wide-ranging strategy was adopted to reverse that trend in western Colorado, focusing on a number of issues from habitat protection to predation to diseases including chronic wasting to reducing impacts of things such as road kill and human recreation.

Those two herds each range from 35,000 to 40,000 deer, between them accounting for about a fifth of all mule deer in the state, said Petch.

Fortunately, prevalence rates are fairly low in some other good-sized herds, in areas such as the north side of Grand Mesa and on Battlement Mesa, the Dotsero and State Bridge areas, and Middle Park, he said.

One challenge the wildlife agency has faced as it ramps up its fight against the disease is the notion among some that its planned response is to annihilate deer statewide.

"That is simply just not true," Matt Eckert, terrestrial programs supervisor for the agency, told the wildlife commission early this year.

Petch said some hunters worry that managing the disease means having to eliminate older-age, trophy-quality bucks.

"We intend to be more moderate in our approach than that," he said.

He said the goal is to continue protecting hunting quality, while working to keep the disease from getting out of control and becoming a major problem. Petch said a number of hunters around Meeker have indicated they want the agency to be proactive about the disease, even if it reduces hunting quality in the short term.

The agency increased buck licenses in a couple of White River herd units last year, and agency staff recommended more increases for this year. The agency also is working on a new management plan for the herd, with hopes of finishing it this fall.

While deer herd health is the chief concern right now, human health also is on the agency's mind when it comes to chronic wasting disease. The agency is watching to see what additional light scientists might shed on the potential for the disease to cross species and infect humans.

Preliminary results of one study have indicated that it can spread to macaque monkeys that ate infected deer and elk, including infected animals that didn't yet show symptoms.

"Their preliminary results are interesting and kind of alarming," Petch said.

The agency is watching to see whether the results of that small study will be replicated, he said.

Petch said he always has deer meat tested before eating it.

"I've personally never had one (test) come back positive, but 25 bucks for me is a pretty cheap insurance policy that that deer is safe to bring into my freezer," he said.

The agency facilitates voluntary testing for the disease at a subsidized $25 rate. It provides free tests for areas where it requires testing.

Purkey also said he would have the meat tested if he killed a deer, just to be safe.

He said workers at his meat-packing plant wear latex gloves when working with wild game meat, don't touch the spinal column and brain matter in their processing any more because those parts of the carcass are most affected by the disease, and don't cut the spinal cord with a saw.

"As far as the packing plant, right now I am not worried about (chronic wasting disease), because they can't prove that humans get it anyway."

"Yet," he added with a nervous laugh.

He worries about other impacts such as out-of-state hunters losing thousands of dollars in outfitting and other costs to kill a deer that ends up testing positive — the kind of thing that could reduce interest in hunting in Colorado.

As for the impacts on his business, Purkey said, "Right now I think there's enough elk hunting around here that it wouldn't affect me in the short term. But elk can also get this disease. It may affect me five or 10 years down the road."