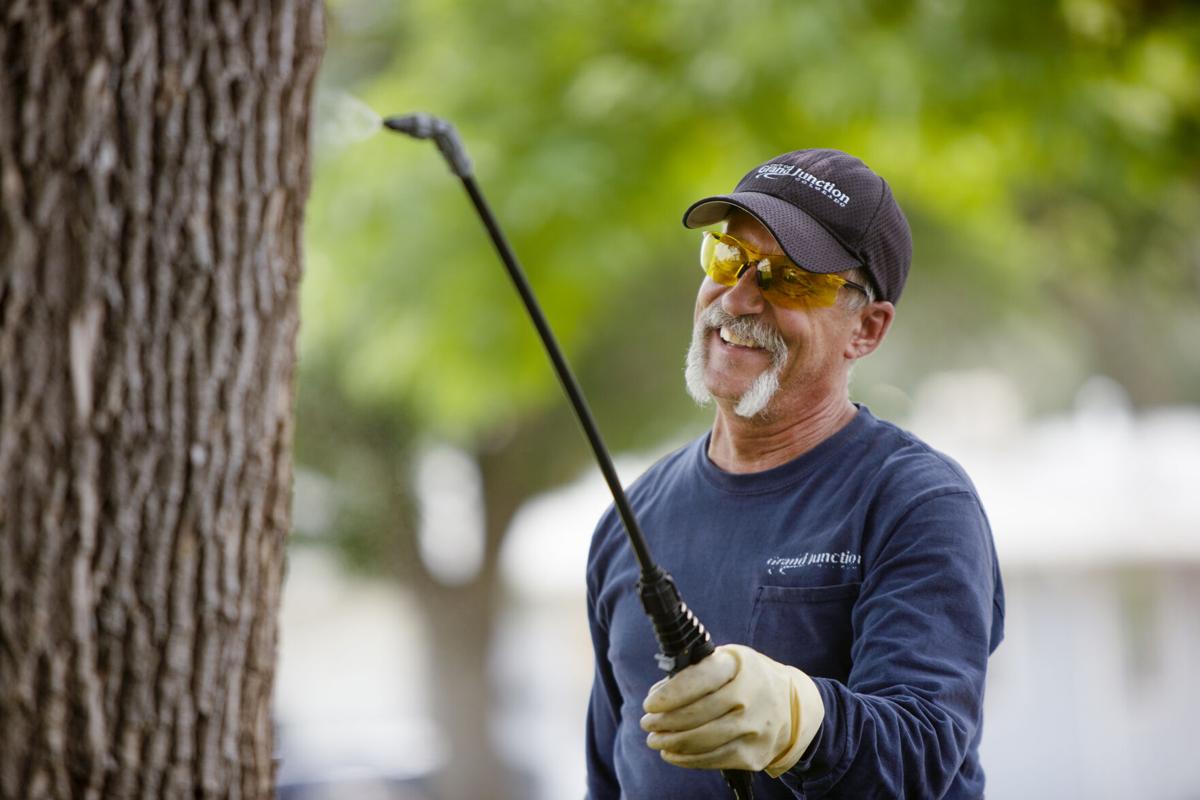 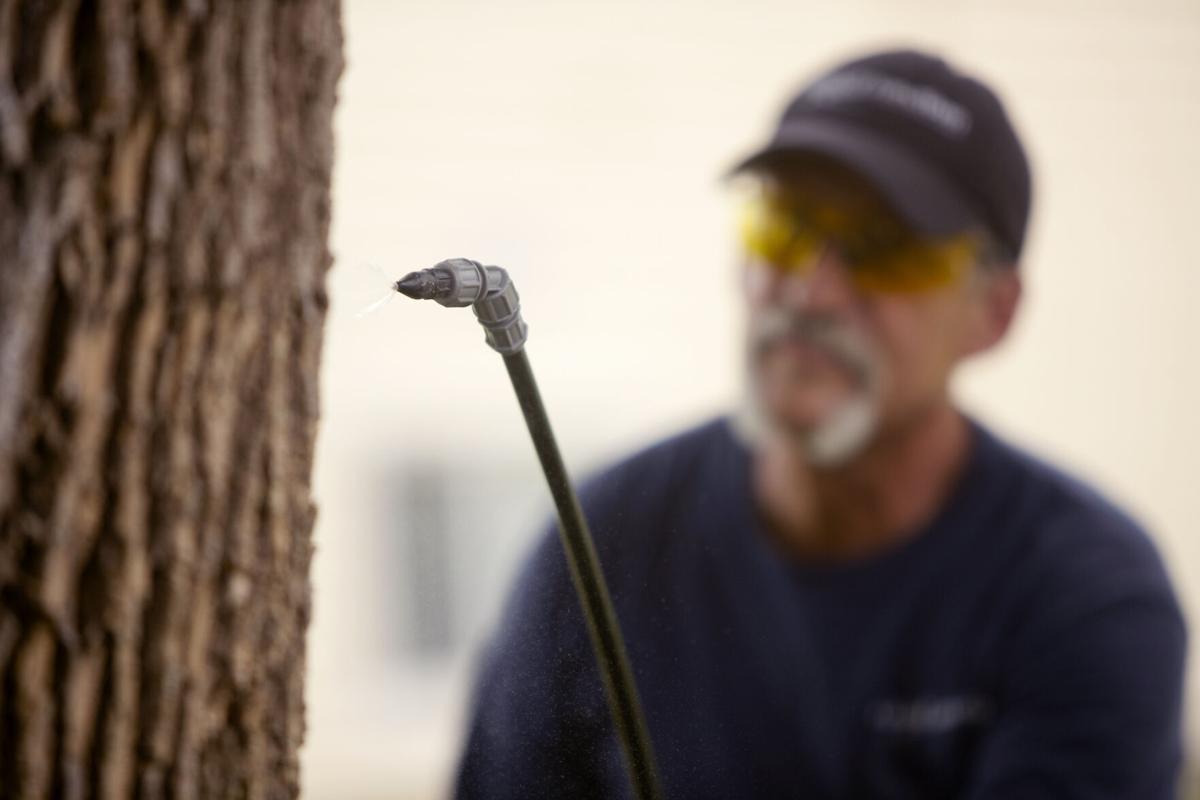 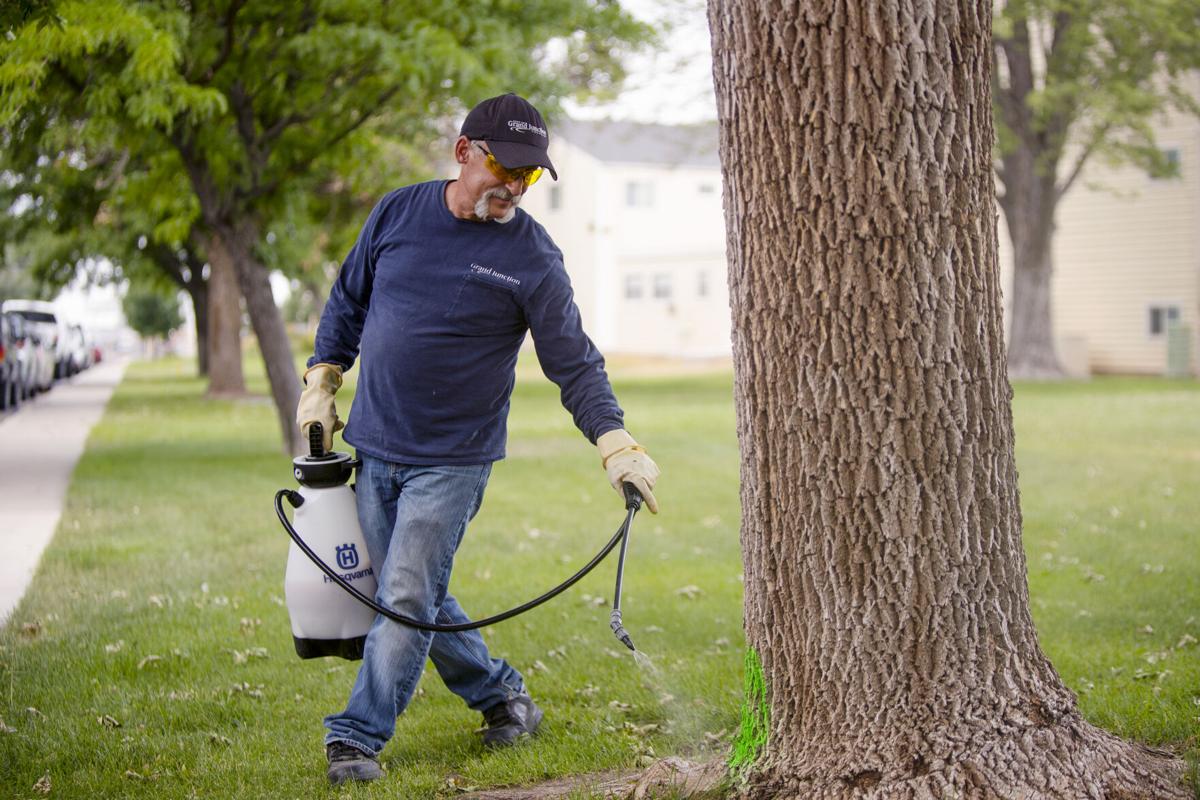 Jamie Boda, a plant health-care specialist for the City of Grand Junction Forestry Department, sprays an insect control product on ash trees along Rood Avenue on Tuesday. Boda is protecting the trees from the emerald ash borer.

Jamie Boda, a plant health-care specialist for the City of Grand Junction Forestry Department, sprays an insect control product on ash trees along Rood Avenue on Tuesday. Boda is protecting the trees from the emerald ash borer.

The city of Grand Junction is taking action to combat several species of insects that are damaging the urban tree canopy.

The primary tree species that has been impacted are ash trees, which makes up 23% of the public tree inventory. Grand Junction residents can expect to see city crews treating and removing public trees around the community at an increased pace this fall.

Ash trees are particularly susceptible to pests such as the lilac ash borer and the ash bark beetle. Another even more damaging pest, the emerald ash borer, has caused severe damage Front Range communities, according to a city press release.

The Parks and Recreation Department is taking steps to prepare for the emerald ash borer. It is injecting ash trees that are healthy and have a large enough trunk with a treatment to help them fight off the insects. Smaller ash trees will be sprayed to deter insects.

Already infested ash trees must be removed, as no treatment will save the tree, according to the release. Trees will be planted in locations where there are signs of stewardship — mainly watering — to replace the lost trees. The city will plant a diverse group of species. It does not plant ash trees and suggests residents plant species other than ash.

Drought is another significant issue facing the city’s trees.

The city does maintain all trees along public streets and in parks. Community members can help maintain the urban tree canopy against drought by regularly watering trees on their property. Watering trees will substantially limit the impacts of dry conditions and mitigate substantial tree loss, according to the release.

Parks and Recreation has redeployed some staff, added one new position and created two additional forestry crews to supplement the one existing crew in response to the drought.

The communities’ urban tree canopy spans 4,650 acres, or 11% of the community, according to the release.

The Parks and Recreation Department maintains over 37,000 public trees along streets, parks, and open space areas.