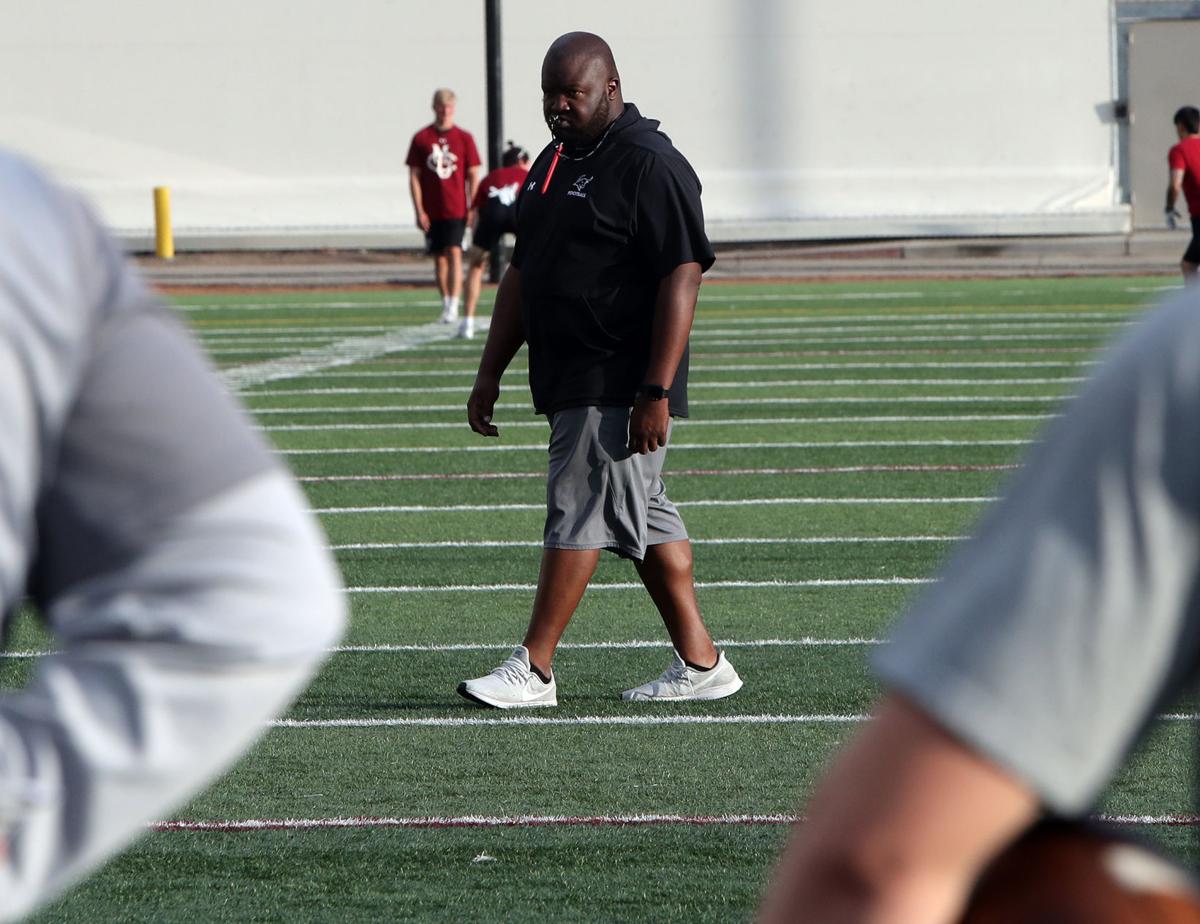 New head coach Tremaine Jackson works with the Colorado Mesa University football team at Bergman Field on the CMU campus. Jackson grew up in Texas and has always lived in more racially diverse cities than Grand Junction, and has already made an impact in many areas since coming to town. 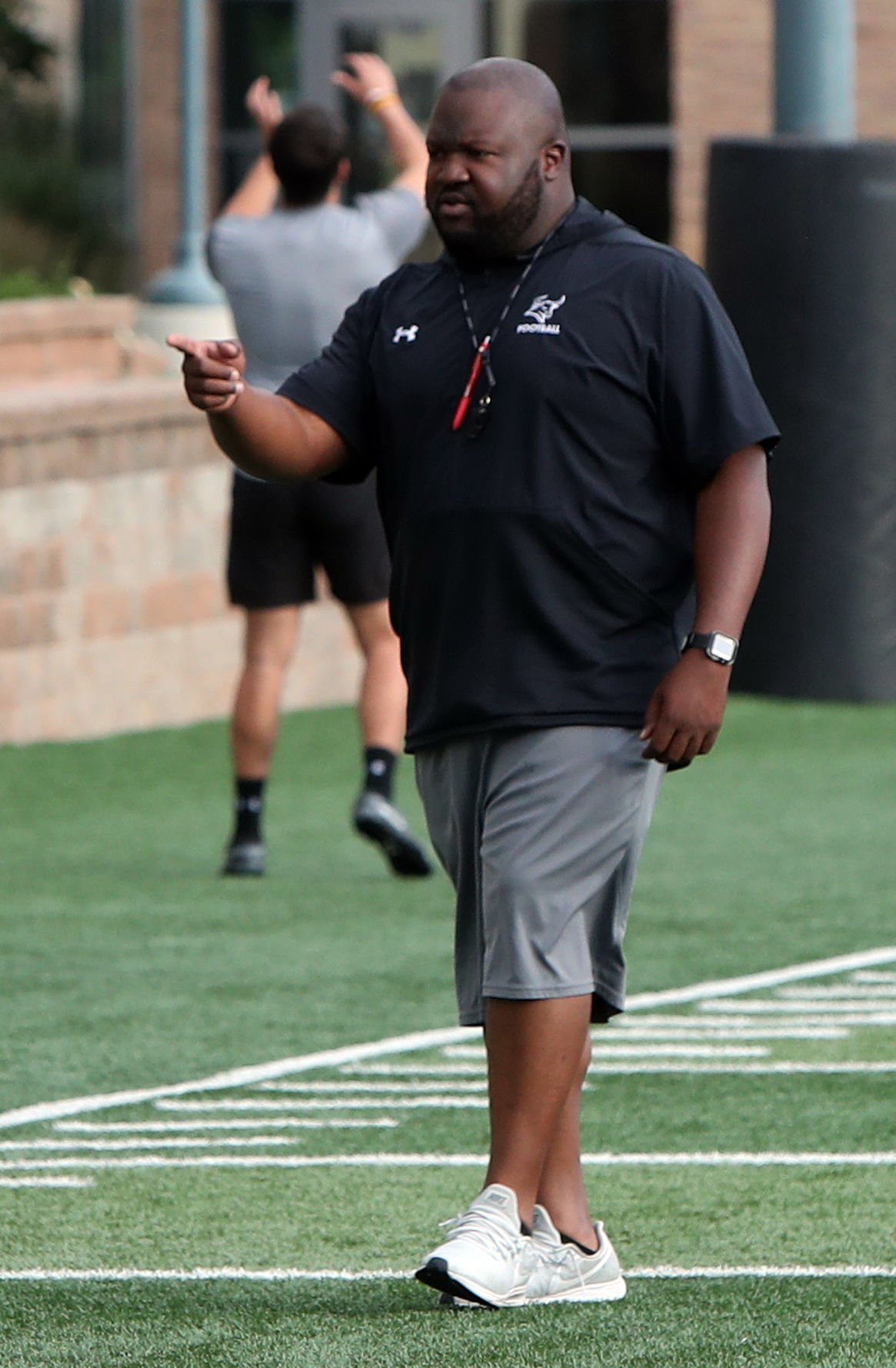 The Colorado Mesa University football team is now working out at Bergman Field on the CMU campus. Here new head coach Tremaine Jackson with the team. 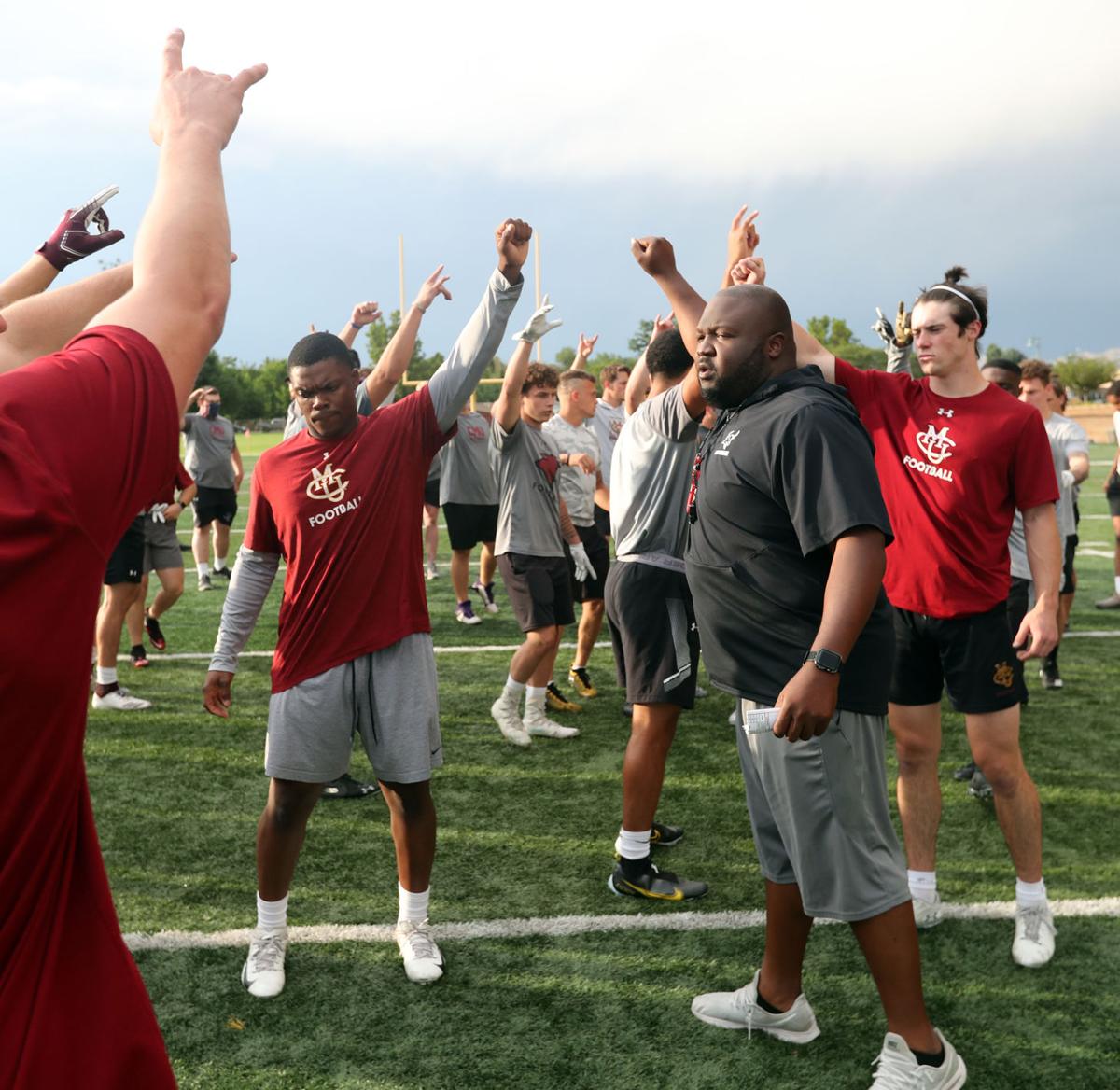 Tremaine Jackson is the first Black head coach ever at CMU. Discussions about race are part of the Mavericks’ everyday routine within the program.

New head coach Tremaine Jackson works with the Colorado Mesa University football team at Bergman Field on the CMU campus. Jackson grew up in Texas and has always lived in more racially diverse cities than Grand Junction, and has already made an impact in many areas since coming to town.

The Colorado Mesa University football team is now working out at Bergman Field on the CMU campus. Here new head coach Tremaine Jackson with the team.

Tremaine Jackson is the first Black head coach ever at CMU. Discussions about race are part of the Mavericks’ everyday routine within the program.

Tremaine Jackson is a talker.

More than that, Jackson puts his words into action.

The first Black head coach ever at CMU, Jackson immediately got involved in the Black Lives Matter movement in Grand Junction after George Floyd’s death in late May. Jackson has long been involved in groups that bring awareness to minority issues, including the Minority Coaches Advancement Association.

“When this happened, for me it was, I have no choice but continue to do the things we’re doing. Now that I have this platform as being a head coach, people want to talk to me a little more anyway because of football and what’s going on,” Jackson said. “I was able to jump in both feet and this institution has supported me like none other.”

He marched with protesters and helped mediate an emotional discussion between them and Grand Junction Police Chief Doug Shoemaker. He’s attended City Council meetings, been on podcasts and done newspaper, television and radio interviews.

Jackson — while running summer workouts amid COVID-19 restrictions — helped form a group to discuss ways to end systemic racism in Grand Junction and beyond.

“With football, when I’ve got 130 dudes, I’ve got a lot of dudes I can influence to go back into their communities and effect change,” he said.

Two days after he and Shoemaker posted messages on Twitter — Jackson with a two-part video and Shoemaker a nine-post thread — they got together with Ky Oday, a former Mesa receiver who grew up in Grand Junction. They talked, got more people involved and started putting those conversations into action.

“This movement is different,” Jackson said. “This is not a ‘We’re going to sit and be still and hope for the best’ movement. This is a charge. We as a community have to understand that these kids are serious about what they want, they’re serious about acknowledging there’s an issue. We have to acknowledge that and make sure we’re all on the same page and we can get to the table and have conversations and really learn about each other.

“This is different because when you watch the George Floyd video, it was eight minutes and 46 seconds of somebody putting their knee on a man’s neck, a Black man’s neck. There’s a lot of Black people, myself included, that have always felt pressure on our neck, a knee on my neck, and feeling oppressed. That’s what makes this so different, in my opinion. You actually see it.”

Jackson grew up in Texas and has always lived in more racially diverse cities than Grand Junction. He wondered if he, his wife and their daughter would be comfortable living on the Western Slope, a question asked of him before he became a finalist for the job. During the interview process, he met Oday and David Combs, both of whom are Black, who answered some of his questions about the community. When Jackson got in the room with the hiring committee, he convinced them he was right for the job.

“I was able to get in and express my plan and compete,” he said. “I won, and that’s all we’re saying as Black people, let us just get in here and compete.”

Three of Jackson’s full-time assistant coaches and about 65% of the players are Black.

“Naturally that happens when you have a Black head football coach,” he said. “We had a kid in here, ‘Coach, I saw you on the news,’ and his mom and dad saw it in Denver. They said, ‘I want my son to go there.’ They just rolled in here.”

The Mavs have white, Hispanic, Polynesian and Samoan players, and discussions about race are part of their everyday routine within the program.

After Floyd’s death and the subsequent protests, players and parents called Jackson’s office.

“I had parents reach out and say, ‘Uh, Coach, from what we’ve been seeing on the internet, there’s not many folks who look like us in Grand Junction. How are you going to handle this issue?” he said.

Talking with Shoemaker was the first step.

“We started a partnership and President (Tim) Foster jumped in and wanted to be supportive and we started a committee,” Jackson said. “It took off even more so than I thought with the amount of support we’re getting.”

Those discussions led to ideas to help Shoemaker attract Black officers to the GJPD and to CMU starting a scholarship for Black students majoring in criminal justice or political science to attend the Police Academy.

“If you really want to effect change, you have to become one of us and be in the room,” Jackson said. “I coach for the same reason.”

When asked how he plans to help the Black players acclimate to Grand Junction, Jackson reiterated it’s a two-way educational street that’s much deeper than cheering for them on Saturday afternoons.

“I think the town has to get accustomed to the kids,” he said. “I’ve been asked that question before. The kids who are coming to our program are coming to play football, represent the institution and represent this community. Their arms are open. We need the community to hug them back.”