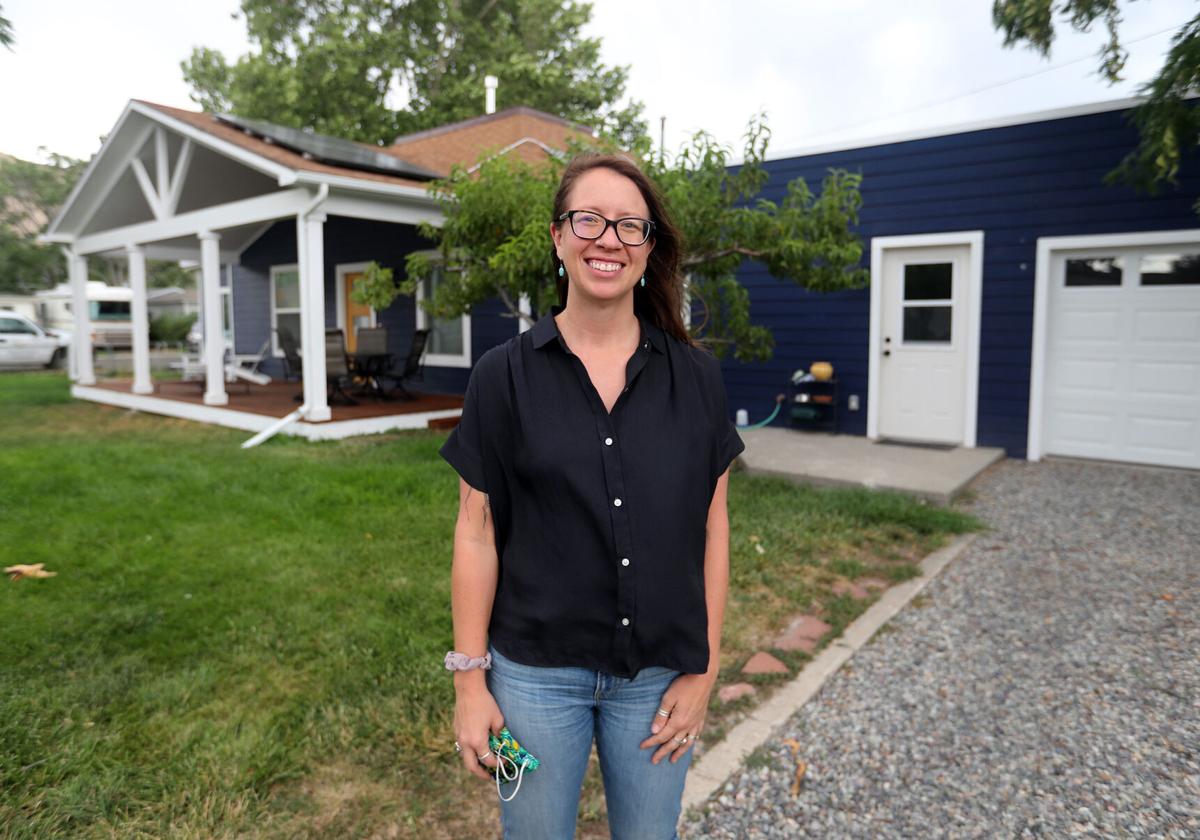 Alisha Wenger and her husband, Tim, were the first participants in a new Mesa County Solar Co-op program to install solar power at their home on West Sixth Street in Palisade. The couple had eight solar panels installed at their home for about $9,000, “which was far cheaper than I was expecting,” Tim Wenger said. 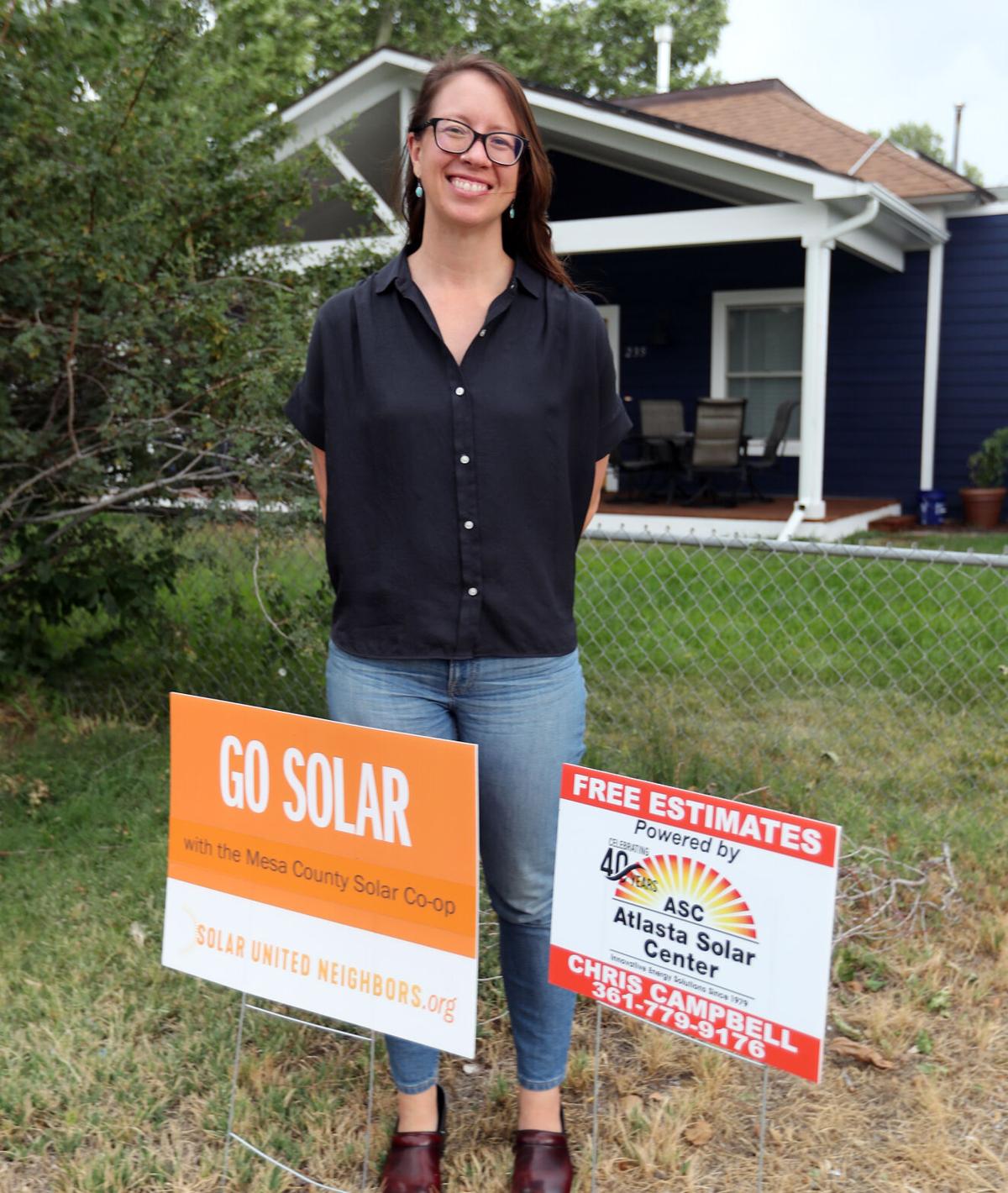 Alisha Wenger out standing in front of a solar home in Palisade at 235 West 6th Street in Palisade. 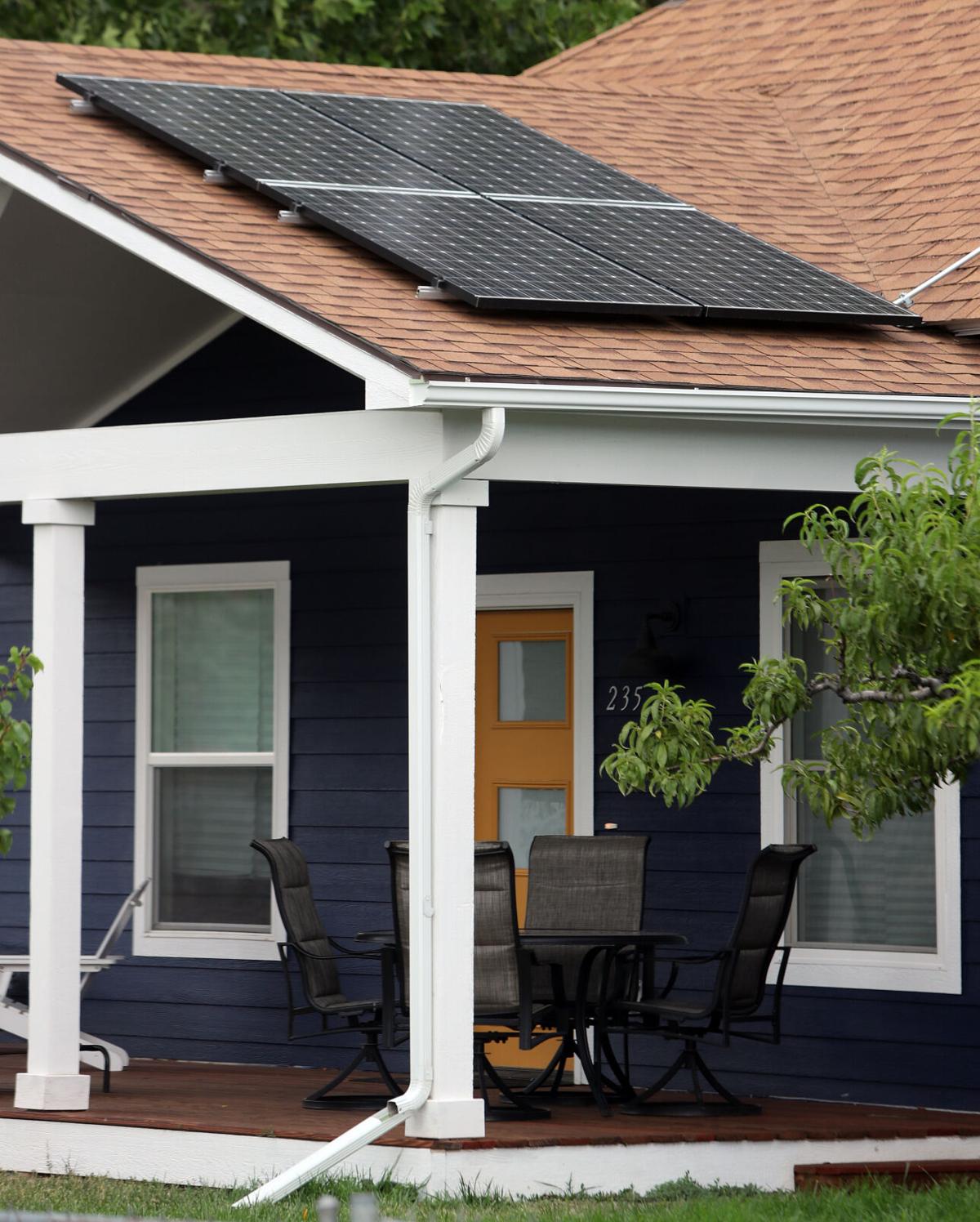 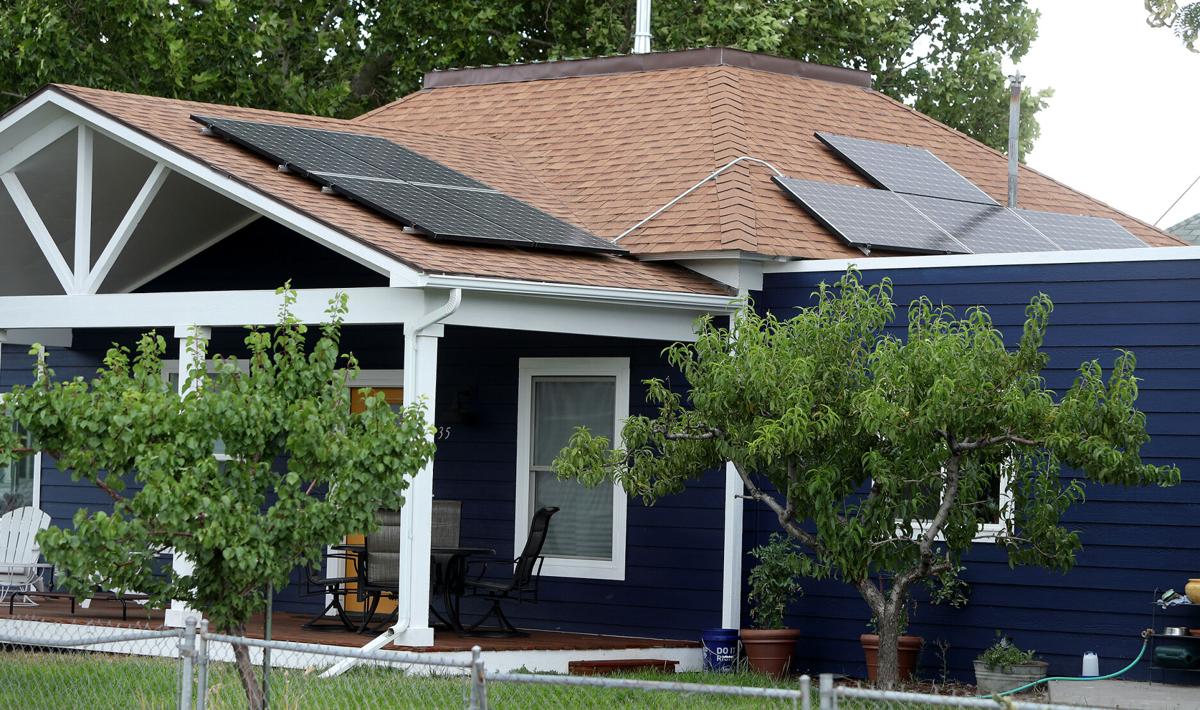 The Wengers installed $9,000 worth of solar panels at their home in Palisade.

Alisha Wenger and her husband, Tim, were the first participants in a new Mesa County Solar Co-op program to install solar power at their home on West Sixth Street in Palisade. The couple had eight solar panels installed at their home for about $9,000, “which was far cheaper than I was expecting,” Tim Wenger said.

Alisha Wenger out standing in front of a solar home in Palisade at 235 West 6th Street in Palisade.

The Wengers installed $9,000 worth of solar panels at their home in Palisade.

The long walks Palisade resident Tim Wenger started taking with his dog after the onset of the pandemic have paid off in more ways than just as a means of them getting some fresh air and exercise.

On one of those walks Wenger spotted a sign in someone’s yard highlighting the new Mesa County Solar Co-op program, which uses the power of bulk, discount pricing to help people more affordably tap the power of the sun.

He looked into the co-op, and Wenger and his wife Alisha ended up being the first participants in the new program to get solar power installed at their home or small business.

“I got eight panels for about $9,000, which was far cheaper than I was expecting,” Wenger said.

That price included the installation and a 25-year warranty, and the Wengers financed it with a 15-year loan, and next year will get a federal solar tax credit of a few thousand dollars that Wenger said he hopes to apply to the financing. After 15 years, they’ll essentially have no electric bill beyond Xcel Energy’s metering fee, Wenger said.

“It was smoother than I thought,” he said of the process he went through with the co-op. “I’d never done anything like this before so I wasn’t sure what to expect.”

For other local residents who might be interested in being part of the co-op, there’s good news. The nonprofit Solar United Neighbors, or SUN, has extended the co-op’s sign-up deadline to Sept. 1.

Already, the co-op has 107 members. It doesn’t cost to join, although donations are welcomed, and there’s no obligation for members to buy solar power installations. Chris Campbell with Atlasta Solar Center, which the co-op selected after an open bidding process to install systems for its members, said about 20 members are committed so far, with about 10 more expected to commit shortly. He’s guessing that eventually about 50% of those who signed up for the co-op will go forward with projects and take advantage of the group pricing discount it offers.

“It’s really the best price that we can possibly offer on the best products, which brings down the payback period and total cost of ownership,” Campbell said.

Wendy Metzger is chair of the co-op steering committee, and also owns Grand Valley Greens, an aquaponic farm in Loma. She’s in the process of getting solar power installed at her property, which includes a large indoor grow operation with a high electricity bill, and also is where she lives.

“I plan to save money in the long run although it’s an investment up front,” Metzger said.

She also likes the environmental aspect of solar power.

“We’re trying to get more people involved only because we think solar is a great alternative for everybody,” she said.

Bryce Carter is Colorado program director for SUN, a national solar advocacy and education nonprofit focusing in part on promoting rooftop projects through the cooperative approach. He said the co-op program has been around about a year and a half in Colorado and so far about $2 million worth of solar power generation has been installed in the state through the program, benefiting about 100 families.

Carter said in Fort Collins, about half of those who signed up for a co-op went forward with installing solar.

He said he thinks the deadline for local co-op participants to commit to buying solar power is around a month after the Sept. 1 deadline for joining the co-op.

“So far we’re pretty pleased in terms of the interest in the community and folks moving forward to get the installs done,” he said.

Carter said some co-op members may be waiting to see what evolves with the economy before committing to have solar panels installed.

He said one point of the co-op signup deadline is to ensure people can take full advantage of the federal tax credit for solar installations that amounts to 26% of system costs this year and falls to 22% next year.

Initially the goal was to get 100 people signed up in the co-op. That’s been bumped up to 120 and could go higher, though Carter said he’d be happy to hit 120. At some point the co-op will be closed to further membership due to a variety of factors. But a second co-op may be created, which Metzger said could provide an opportunity to another solar vendor and potentially also allow for a better price to be negotiated if the price of solar power drops.

Carter said that once membership is closed for the first co-op, a waiting list to join a possible second local co-op will be created. His organization will look at the level of support in the community and funding, and if another co-op is created it likely will happen next year.

“That’s the goal, is we want to keep this program going and continue to serve the community,” he said.

Metzger said the co-op program helps people find out what solar power would cost them and ultimately save them, and if it’s right for them.

As for the co-op’s selection of Atlasta as the solar contractor, “They’ve been in the community for a long time, they have a good reputation and they gave us good pricing,” she said.

Campbell said Atlasta already offers any customer a free, no-obligation estimate, and focuses on educating them. But he likes working through the co-op and the nonprofit SUN because they’re providing information and answering questions as a third party, independent of Atlasta.

“I think it’s more validation and verification for customers who want to do solar that this is a real thing, and not only are they getting a great price but the information and science behind what we do on a daily basis is good and valid.”

With the pandemic, Campbell thinks people are giving more thought these days to their home electricity bill and the potential of solar power as they work from home and their employer isn’t paying to keep the lights on.

“With more people home, more kids home, I think more people are a little more hyper aware of what that bill looks like,” he said.

Wenger said both environmental and financial factors drove the decision by him and his wife to have a solar power system installed.

“My wife and I wanted to do our part to support clean energy and transition toward that, but once we started looking at the finances and the fact that we hope to own our home for a while and raise a family there, it made financial sense as well,” he said.

Alisha Wenger was born and raised locally but the couple moved to their Palisade home a little over a year ago after living in Lakewood. They were seeking a lifestyle change, and Alisha sees switching to solar energy as part of that change and is happy the couple was able to get panels installed so quickly.

“We’re just really proud that we’re able to support the (solar) movement here in the valley,” she said.