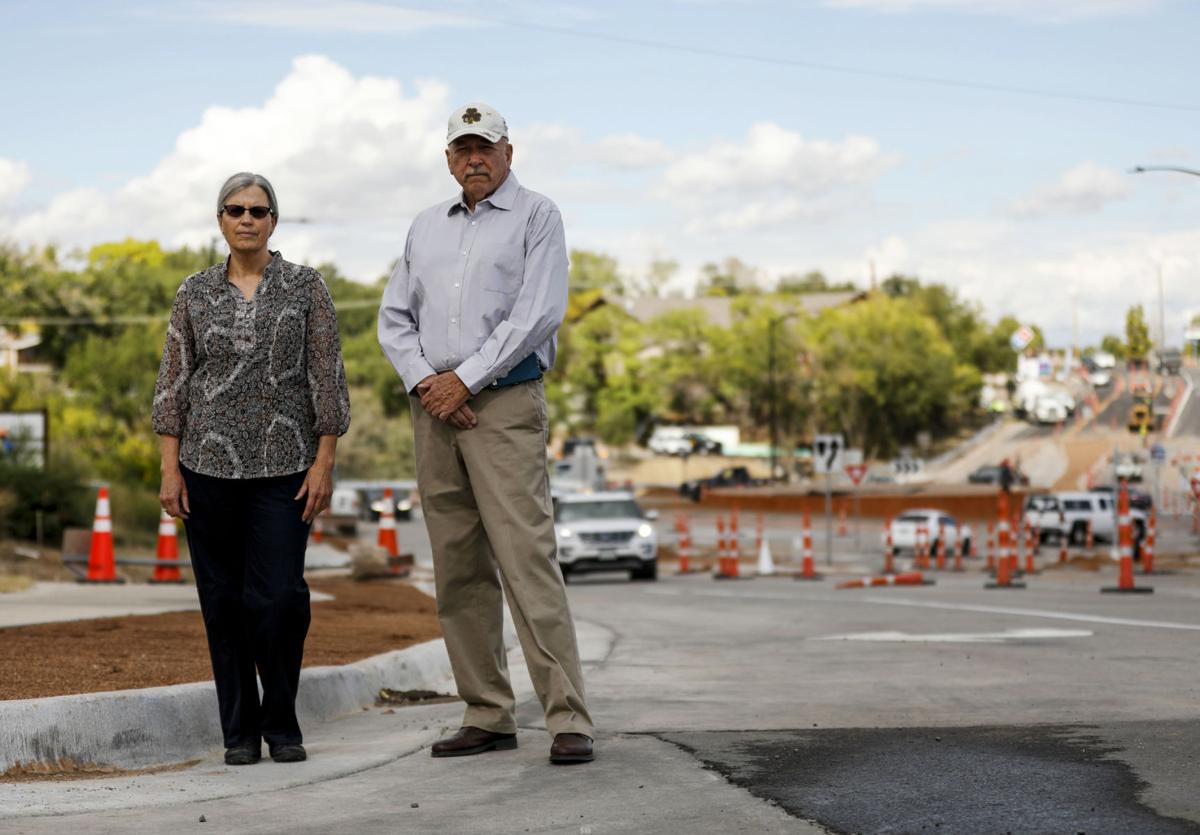 Lisa Stansbury, left, and Jim Langford, right, nearby residents have concerns about the concrete work at the Redlands roundabout. 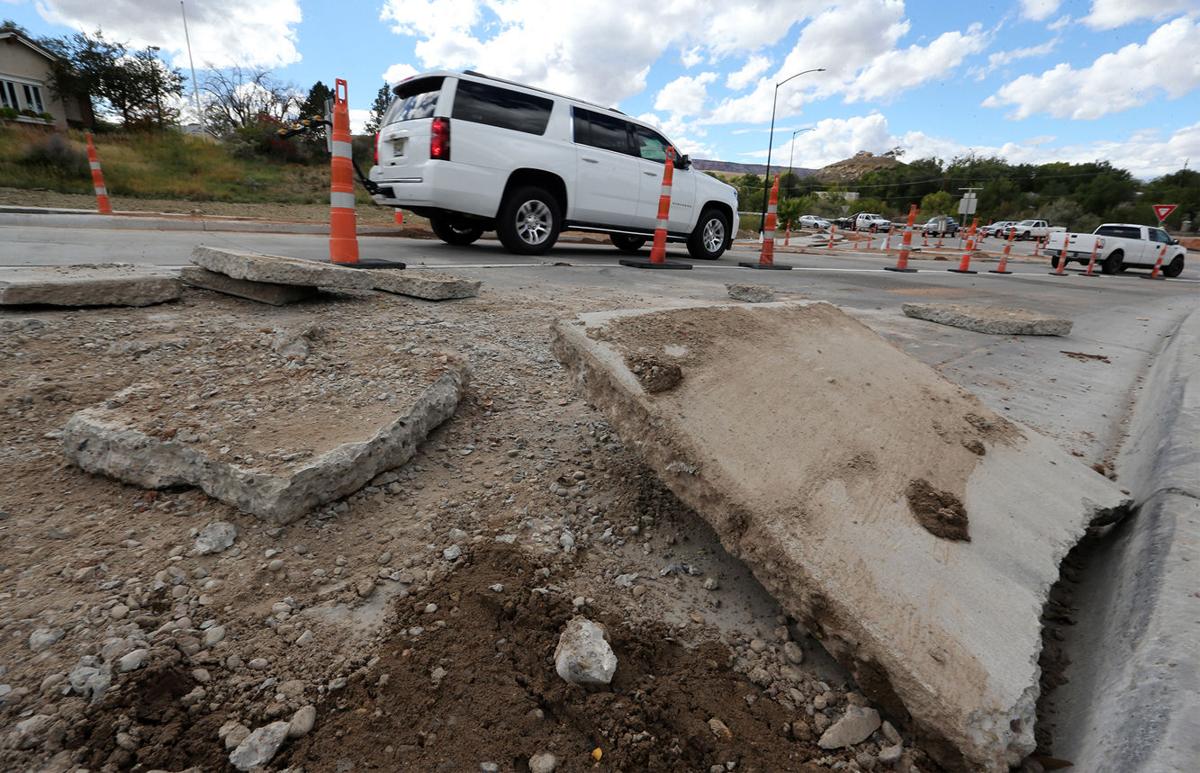 Ripped out section of concrete walk ways at the Redlands roundabout Thursday afternoon. 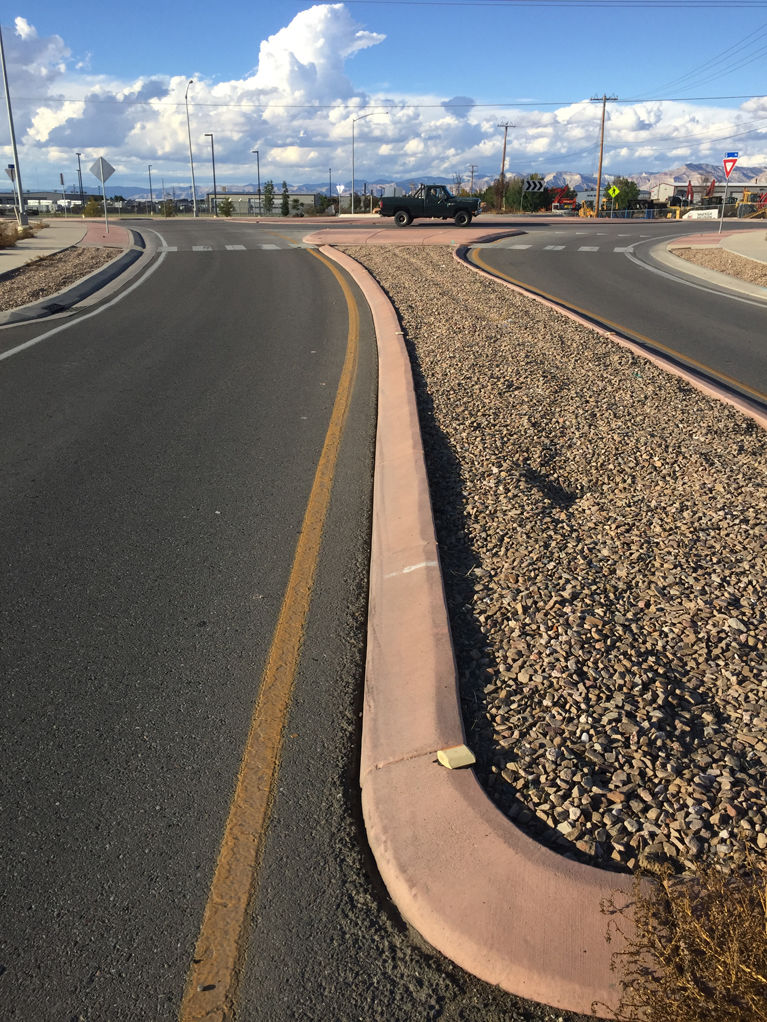 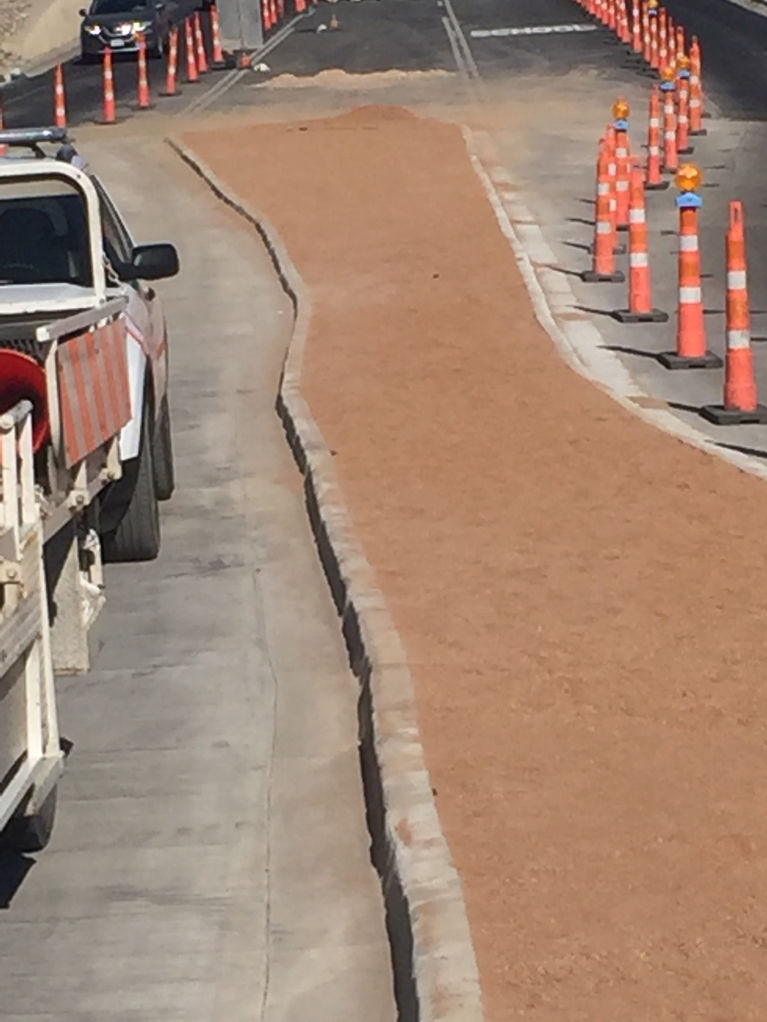 Lisa Stansbury, left, and Jim Langford, right, nearby residents have concerns about the concrete work at the Redlands roundabout.

Ripped out section of concrete walk ways at the Redlands roundabout Thursday afternoon.

A couple who voiced concerns over the quality of construction at the Redlands roundabout has butted heads with the project manager over their criticism. What started with taking photos of crooked, jagged concrete curbing escalated to the site supervisor calling police and demanding that one of them be cited for trespassing in the construction zone.

After driving through the construction dozens of times, Jim Langford and his fiancée, Lisa Stansbury, decided it was time to stop and take a look.

On the way to their Redlands home, they'd kept an eye on the progress. They both have engineering experience, and though Langford is now retired, they share a personal and professional interest in construction projects.

Last Saturday, they stopped to take a closer look at the roundabout, which has been under construction since February and is nearing completion in the coming weeks.

Seeing the concrete curbing up close only accentuated what the couple had noticed when driving through the project — jagged edges, lines that weren't straight and didn't match the workmanship they were accustomed to seeing in other roundabouts around town. Across the street, brand new sidewalks that had recently been poured were being torn up and stacked into rubble, in front of the Canyon View Car Wash, as they already had cracks in them.

When they voiced concerns about the appearance of the concrete curbing to construction personnel at the site, no one disagreed with their observations but said Colorado Department of Transportation officials had signed off on the work, Langford and Stansbury said. CDOT Project Manager Damian Leyba invited them both to his office to look at the plans, which they did. The couple said Leyba defended the work of the concrete subcontractor, Martinez Western Constructors of Rifle, which had been hired for the job by Elam Construction.

They had what all described as a cordial visit that included Leyba asking for their contact information and whether the couple would be interested in consulting on a future roundabout project CDOT will be pursuing in Clifton. He recognized they had engineering experience, as Langford is a retired engineer and Stansbury has been a civil designer for more than 35 years.

The next morning, however, the tone of the conversation changed when Leyba confronted Stansbury, who had arrived at the site to take more photos and document her concerns. She intended to include the images with letters to CDOT, the city of Grand Junction, Mesa County and Elam Construction, the prime contractor in charge of the project.

"It wasn't to get anybody fired," she said, noting that her goal was to bring attention to the problems so they could be fixed before the project was finished and all the contractors got paid.

Leyba claims the couple yelled and cursed at him on Saturday and that Stansbury was aggressive Sunday when she returned to the site alone. He said she cussed at him and refused to leave the site, and he warned her he would call 911.

Stansbury said she was taken aback when Leyba drove up and confronted her about taking photos again on Sunday, said his behavior was aggressive and that he told her he was calling 911 after she criticized his oversight of the project.

"I told him, 'This is the (expletive) concrete work I've ever seen,' and pointed at him, "And you know it,'" Stansbury said. "And that's when he said, 'I'm going to have you charged with trespassing.'"

She said that was the only curse word she used and it was in reference to the work, not Leyba.

She said she was not harassing workers or cursing at them, as Leyba told police.

A Grand Junction police officer issued a citation to Stansbury, which amounted to a $22 ticket and a charge of pedestrian disregarded traffic control device. She says she will fight the charge, claiming she took photos in a public right-of-way, used crosswalks and didn't trespass.

Langford and Stansbury both said they're not anti-roundabout, and they realize the project has received much public interest from folks who don't like them and don't understand their safety benefits. They've both designed projects that include roundabouts, including the Corner Square development on the southwest corner of First Street and Patterson Road.

"It's not about roundabouts," Stansbury said. "It's about workmanship and quality."

The two said they found the lack of quality offensive.

"I wouldn't accept that in my driveway," Langford said. "This is a $4 million project in the center of the Redlands, this is the kind of project contractors want to hang their hat on."

When asked if he was satisfied with Martinez's work prior to being contacted by the couple, Leyba said he was. He called the uneven, jagged curbing an "optical illusion" and said it "looked a little different."

CDOT Resident Engineer Rob Beck, Leyba's supervisor, said it's a tricky call to determine whether to make a contractor replace something that is technically up to specifications but isn't pretty.

"In this case, Langford and others are rightly concerned that it just doesn't look right," Beck said.

As to whether CDOT will accept the workmanship of the concrete curbing performed by Martinez, "We are currently negotiating this issue," Beck said.

The stretch of sidewalk in front of the car wash on the northeast section of the roundabout, which Martinez also constructed, was torn up and removed last week. The subcontractor was replacing it because CDOT doesn't accept cracked sidewalks.

Beck acknowledged that Langford and Stansbury had "legitimate concerns" about the work and that CDOT welcomes public input, as it has received much of it on this particular project. But the department has a priority to maintain safe construction zones and pedestrians are not allowed in certain areas for safety reasons.

Although the curbing might pass muster technically, there are specifications CDOT has that would likely allow project managers to require the contractors to fix it before final project approval. Some of those specifications include contractors to perform the work "in a manner consistent with reasonable and customary manufacturing and construction practices." The specifications also say that unacceptable work resulting from any cause and found before the final acceptance of the work "shall be removed and replaced in an acceptable manner at the contractor's expense."

Beck said even if CDOT asks the contractor to fix the unsightly curbing, it shouldn't push the project past its completion deadline, which was set in November. The repairs would not be done at additional taxpayer expense. The contractors would be responsible for absorbing the cost.

"We are very jealous of the taxpayer dollar," Beck said. "We really don't want to waste it."