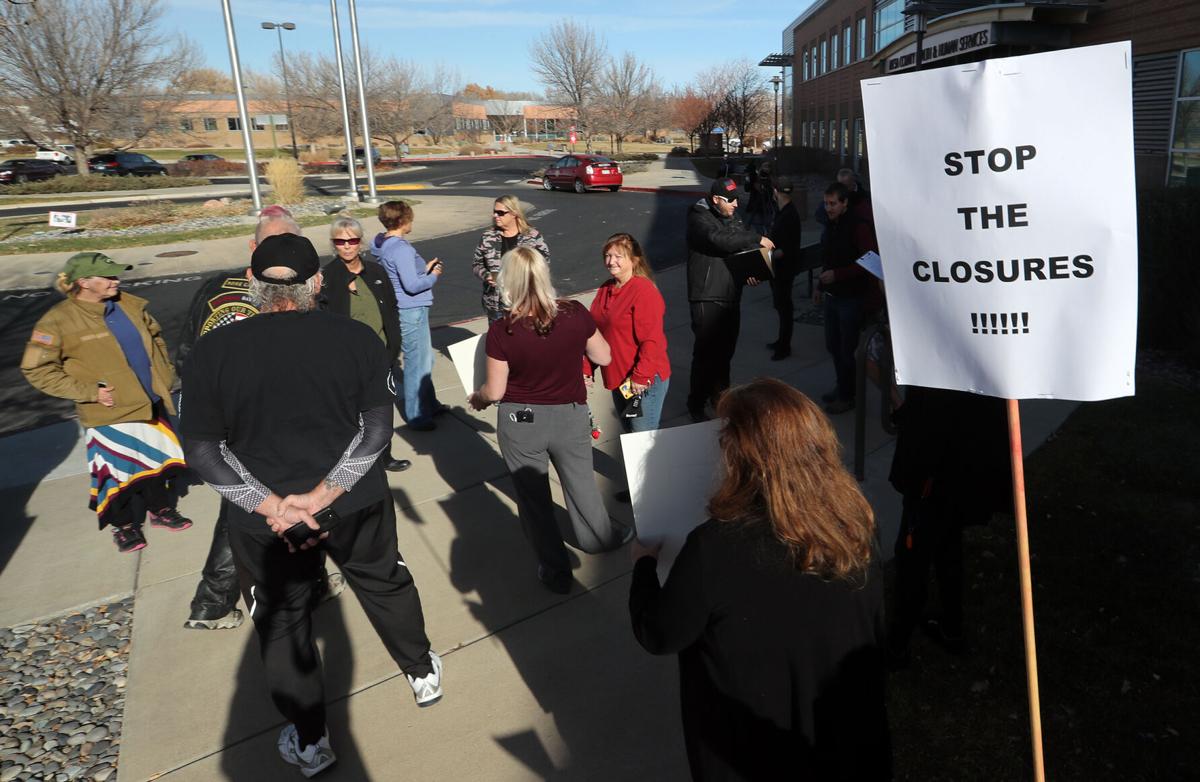 Outside the Mesa County Health Department, 510 29 ½ Road to protest MC health covid restrictions Friday morning. About 30 people were at the protest. 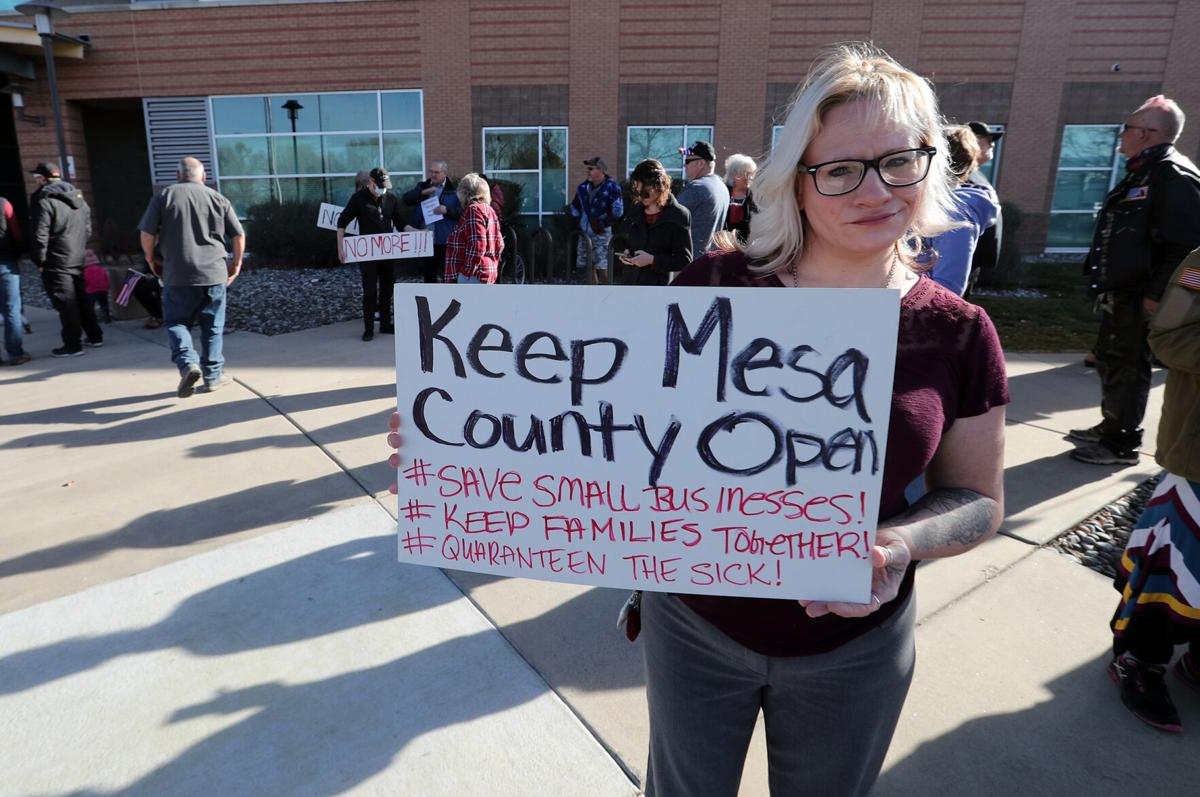 Shaunna Dickens of Fruita was one of those protesting health restrictions outside the Mesa County Health Department on Friday. 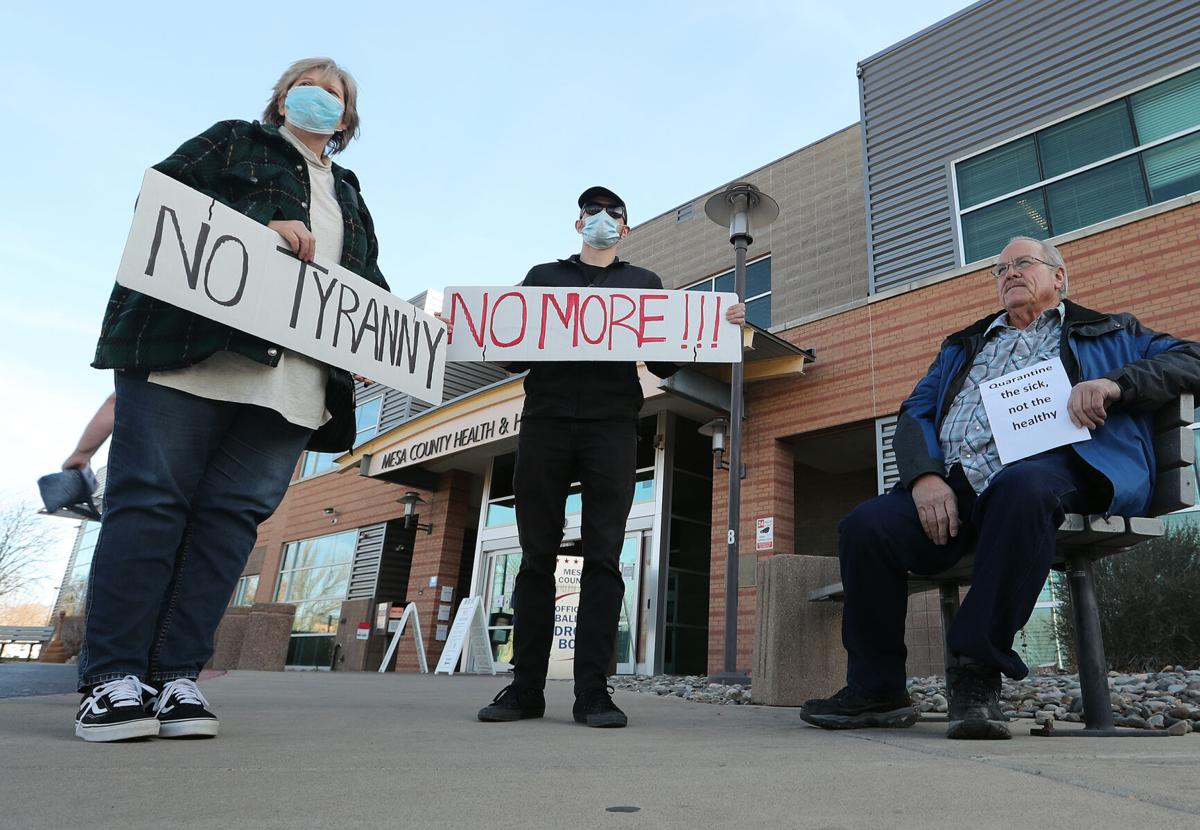 Outside the Mesa County Health Department, 510 29 ½ Road to protest MC health covid restrictions Friday morning. About 30 people were at the protest.

Shaunna Dickens of Fruita was one of those protesting health restrictions outside the Mesa County Health Department on Friday.

The folks protesting Mesa County’s new restrictions Friday brought on because of a dramatic increase in coronavirus infections — more than 1,000 cases in the past five days — have a sympathetic ear with the two new commissioners set to take office in January.

Much like the current commissioners on the three-member board, Janet Rowland and Cody Davis said they want decisions made to be mindful of impacts on the economy, particularly mom-and-pop retail establishments.

But while Rowland, who praised the work of Public Health Director Jeff Kuhr, said she didn’t expect to see much of a change in the county’s response when new board takes charge next year, Davis’ attitude swings more toward the herd immunity side of things.

Davis cited the “Great Barrington Declaration,” a proposed pandemic response that has been denounced by the World Health Organization and dozens of other public health experts as being unethical and lacking a sound scientific basis because it calls for allowing the virus to spread unchecked, regardless of how many deaths could occur.

The declaration was authored by three professors — one a theoretical epidemiologist, and the other two of medicine but with focuses in health care economics or biostatistics — and was commissioned by the American Institute of Economic Research in Great Barrington, Massachusetts, a free-market libertarian think tank funded by Charles and David Koch.

In an open letter released last month, the American Public Health Association and 17 other similar groups said the declaration would lead to far more deaths than the 1 million that have occurred worldwide so far.

“We have seen the failure of the herd immunity experiment in nations such as Sweden, which has the highest mortality rate among Nordic countries,” the Oct. 14 letter reads. “COVID-19 carries a much higher risk of severe disease and death than other infections where herd immunity was attempted. It is illogical to ignore public health and scientific evidence when so many lives are at stake.”

That herd immunity sentiment, however, was the theme of Friday’s protest in front of the Mesa County Public Health Department on 29 1/2 Road.

About 30 mostly maskless protesters hosted by a group calling itself Free Mesa County chastised many people coming into the building who wore a mask. The group is calling for removing all government controls when it comes to the pandemic — calling restrictions unconstitutional — and protecting people’s right to personal liberty, such as not wearing a mask and not limiting occupancy at churches.

The new restrictions came about this week as a result of a surge in cases and Mesa County reaching capacity for ICU beds. So far this month, 32 Mesa County residents have died of COVID-19, including five on Friday.

Rowland, who is replacing term-limited Commissioner Rose Pugliese, doesn’t go quite as far as Davis, but she does say she is committed to keeping the county open for business while protecting its residents at the same time.

“It’s not an either/or situation,” she said. “We can’t lose sight of the fact that this virus has a 99.5% survival rate, and that there are other health and social impacts from shutting down that are just as bad.”

And Rowland would know. She and her husband, Lance, both contracted the virus earlier this month and spent time in quarantine. They are out of it now, and Rowland said their symptoms were minor.

“This is not to make light of those who have died from this virus, and we also can’t make light of those who have lost their businesses, jobs or homes as a result of the shutdown,” she said. “Others have suffered unnecessary health complications because they weren’t allowed to have elective surgeries during the shutdown. Those people matter, too.”

On Jan. 11, the two will join Commissioner Scott McInnis on the board. Last week, McInnis issued an urgent plea to county residents asking them to wear masks and follow other public health guidelines, saying if they don’t, more restrictive measures may be imposed if the infection rate doesn’t slow.

Because of a change in how the state rates counties based on their infections, this new phase won’t be as bad as the full lockdown the county and state experienced in the spring.

Here in Mesa County, it is expected to be more open than other counties that are going to the same high-risk level.

“Because of Mesa County’s Five-Start program, level red isn’t the same as it is in other counties,” Rowland said. “Businesses in Mesa County can obtain a five-star rating and remain open at 50% capacity. I think it’s important for people to understand that.”

Davis said that he’s troubled by online companies such as Amazon and Walmart seeing record profits during the pandemic, while brick-and-mortar stores are struggling to stay open.

“We have to find balance, and I think we can in a more focused approach,” he said. “State and national leaders should keep us educated and informed, while local decision- making would serve our communities better.”