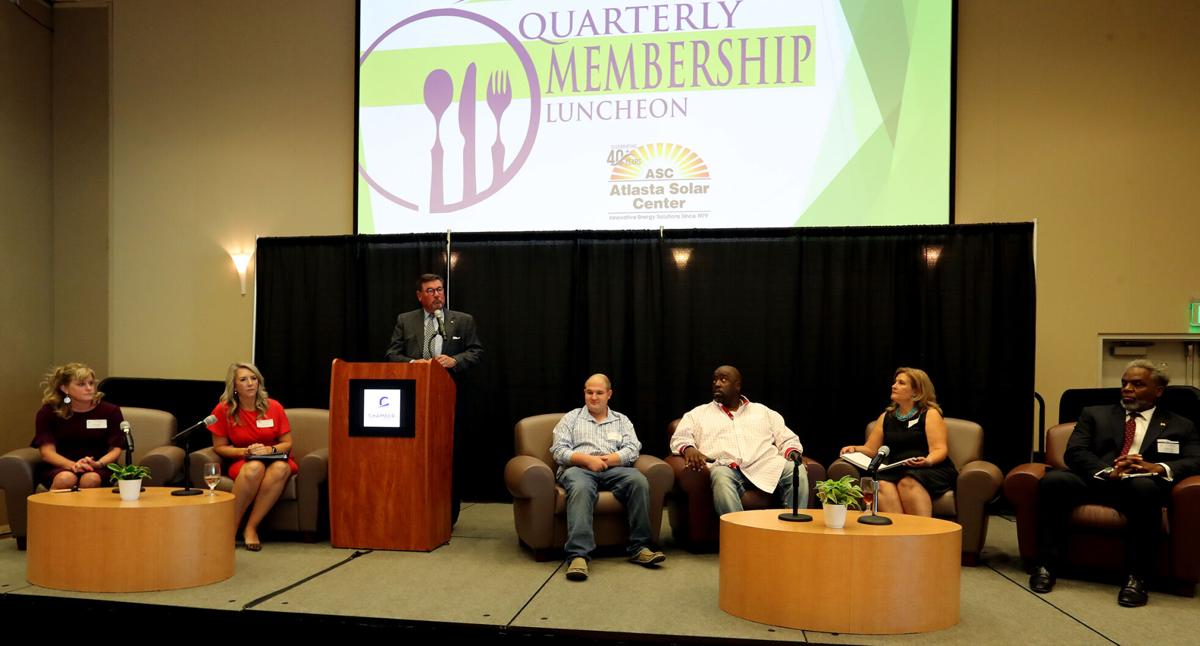 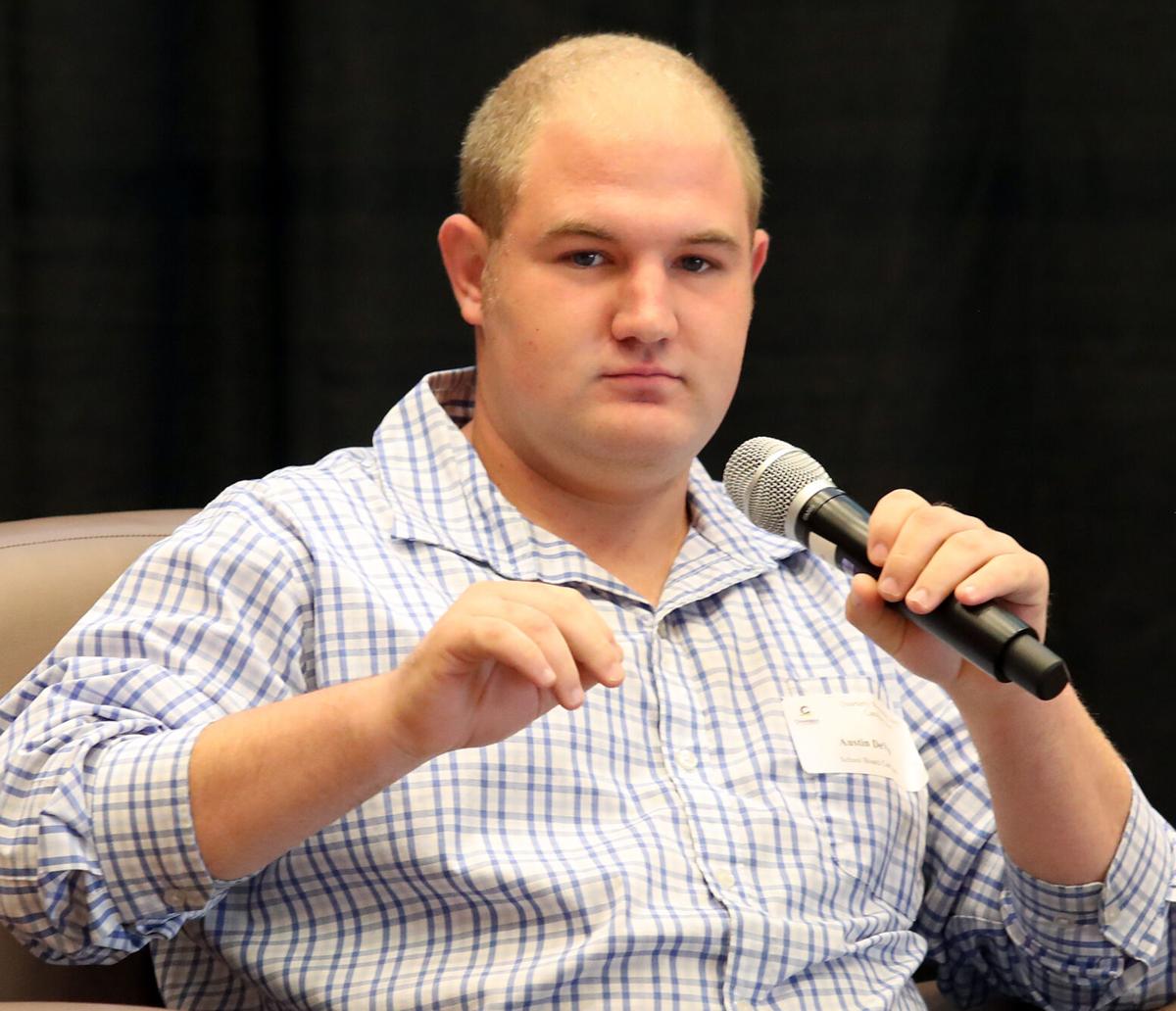 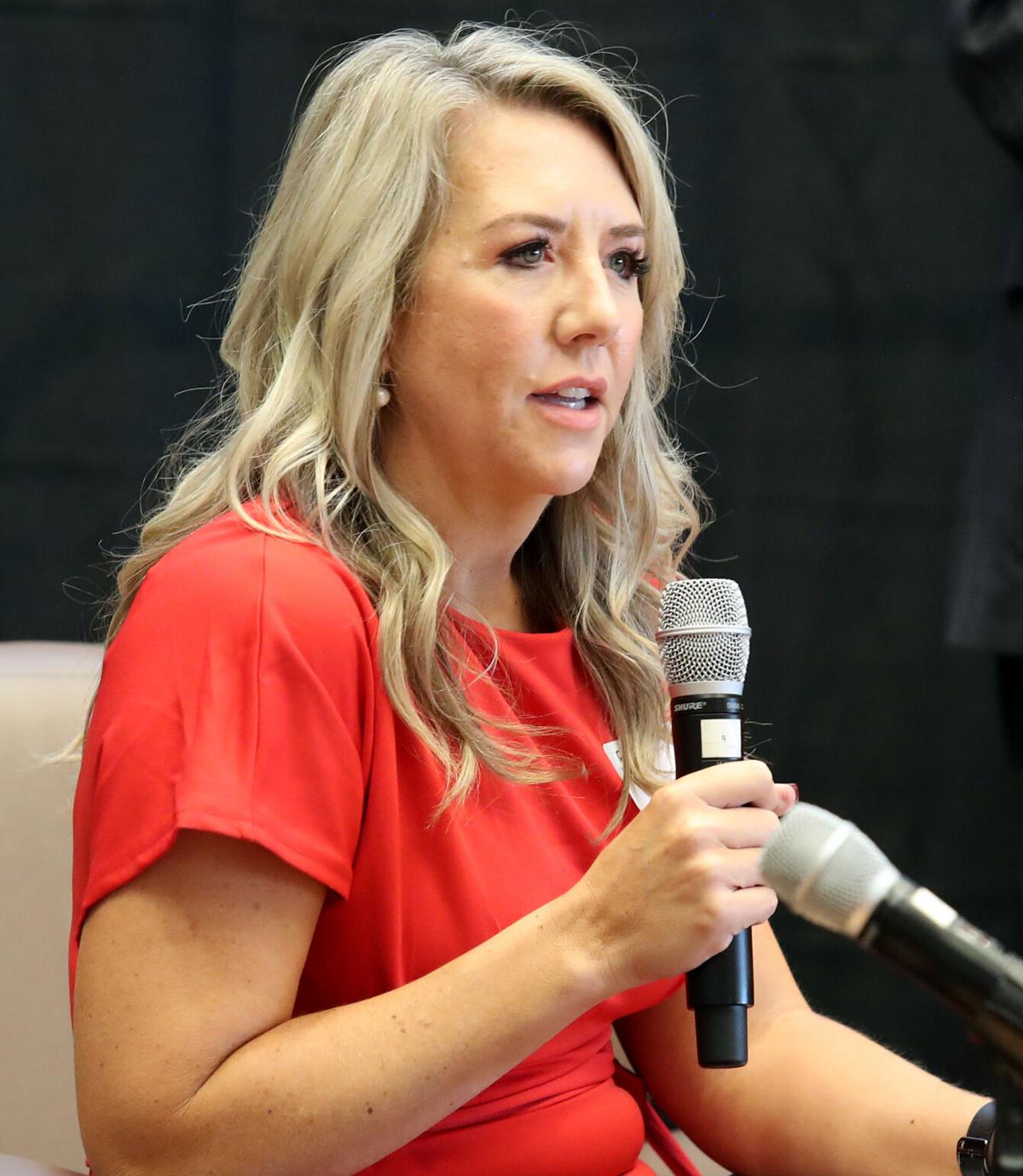 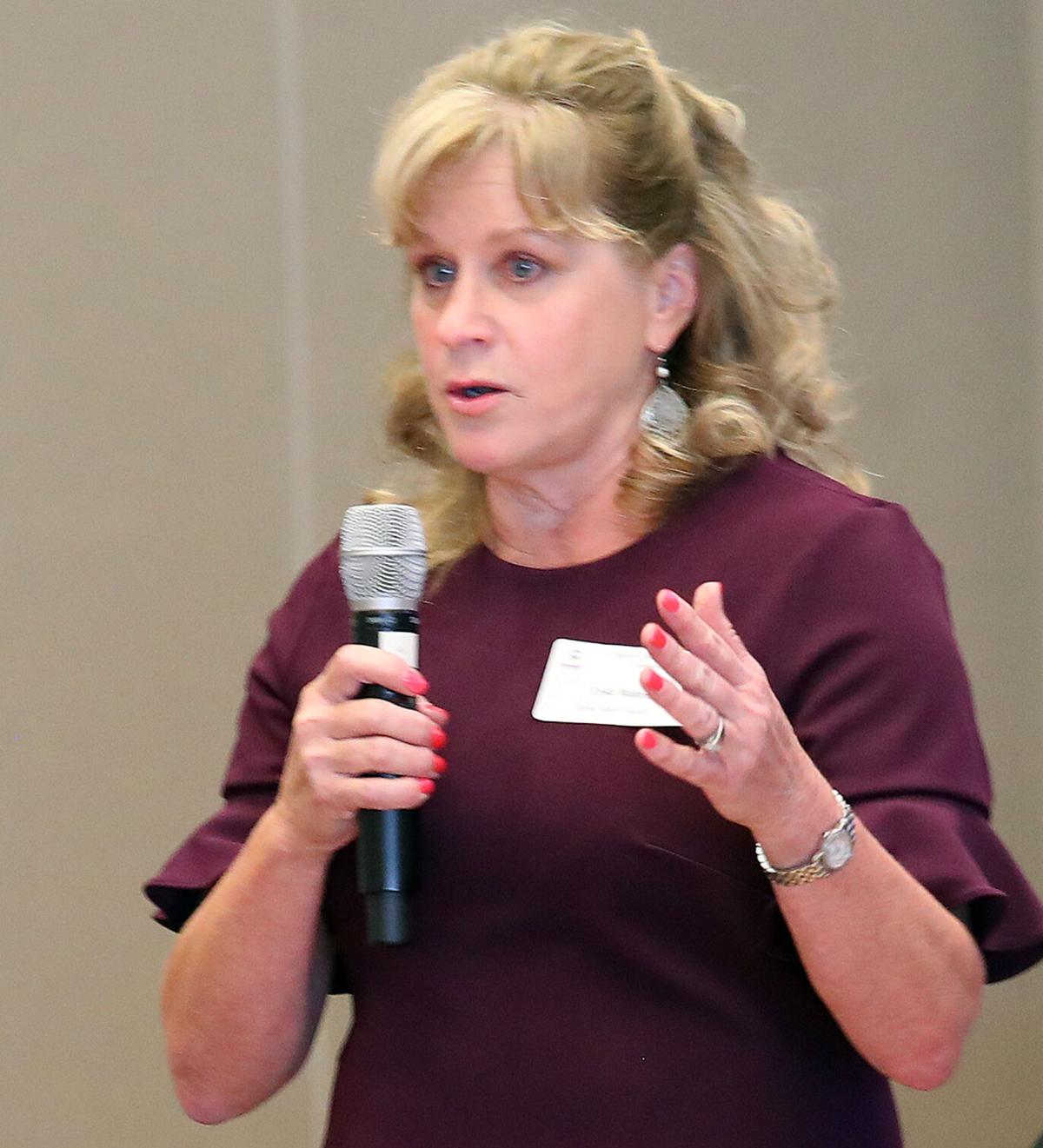 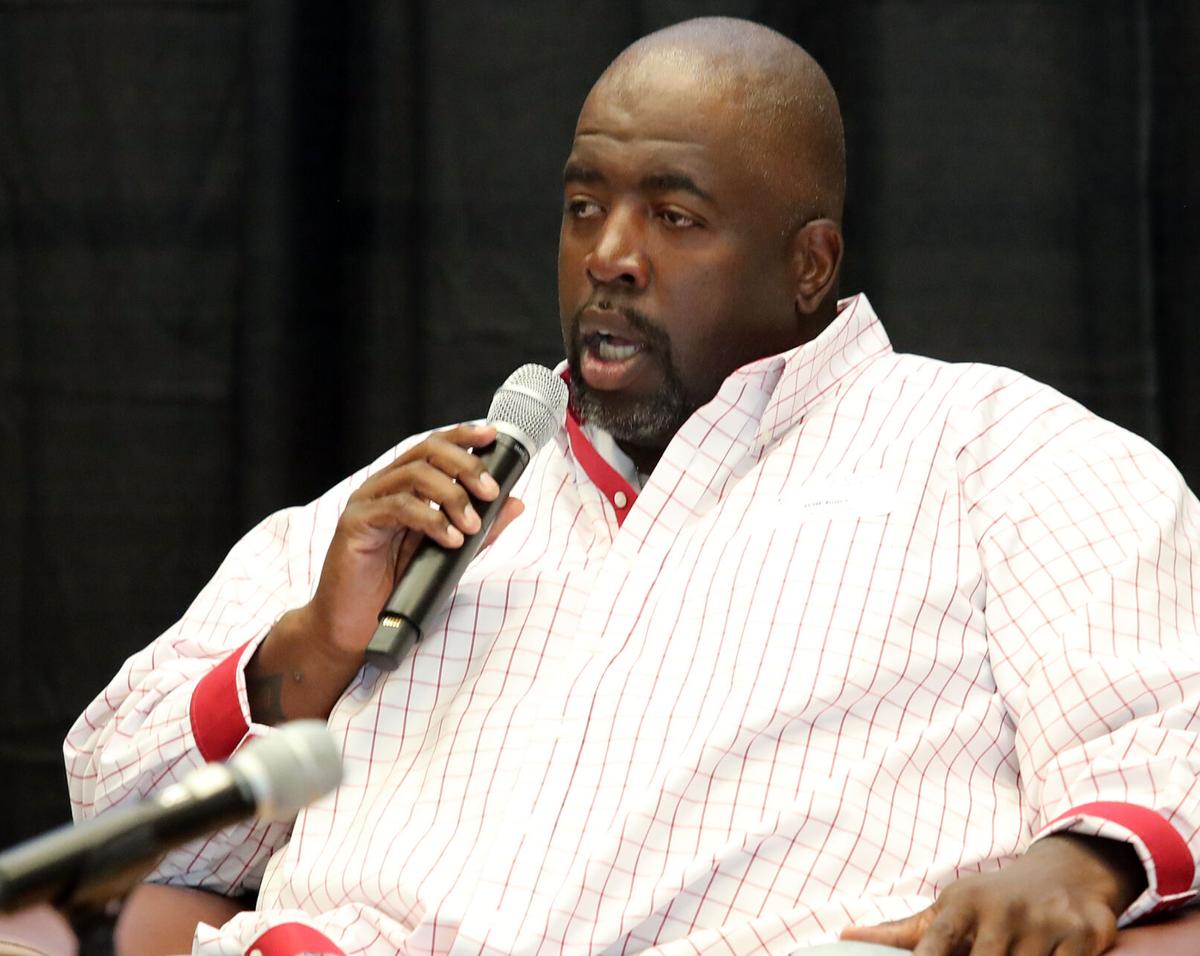 Will Jones speaks at the Grand Junction Chamber meeting Monday afternoon in the ballroom at Colorado Mesa University. 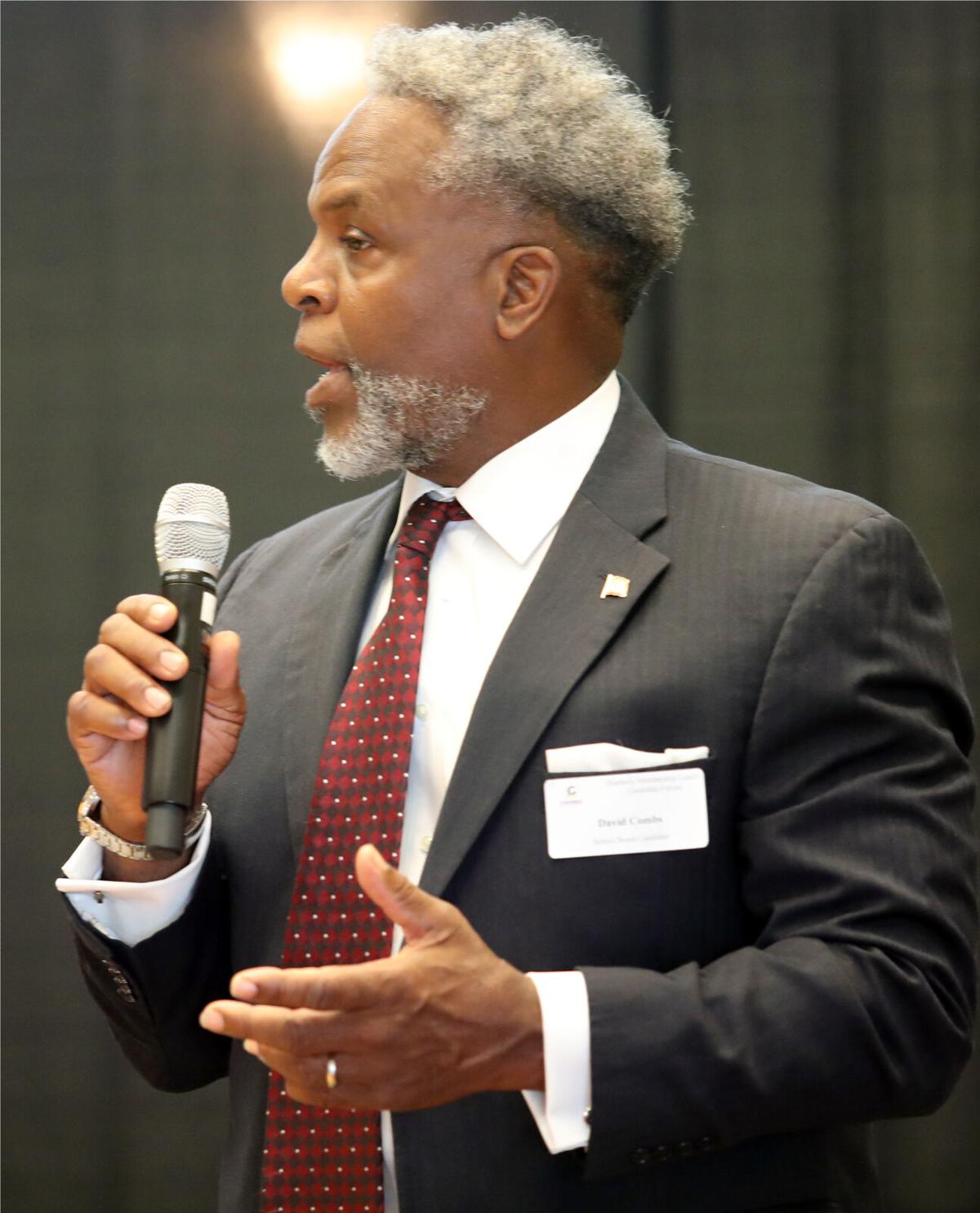 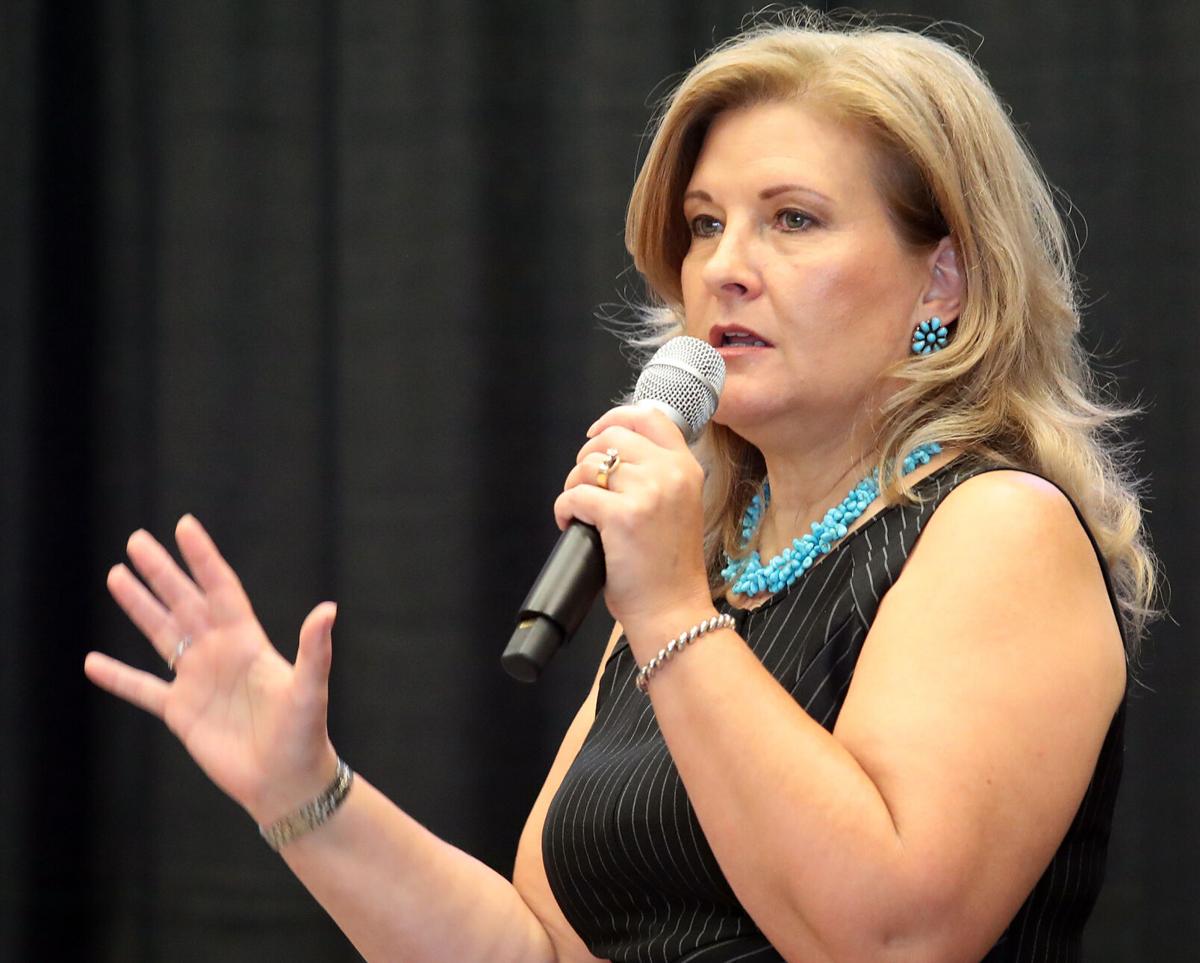 Will Jones speaks at the Grand Junction Chamber meeting Monday afternoon in the ballroom at Colorado Mesa University.

At the forum were Austin DeWitt, Andrea Haitz and Trish Mahre, who are vying for the seat occupied by Mahre in District C; Will Jones, running for District D’s seat against Nick Allan, who was absent from the forum; and Andrea Lema and David Combs, who are competing for the District E seat.

Haitz, a real estate agent and graduate of Central High School, said she is personally invested in setting teachers up for success with smaller class sizes and by including teacher feedback in district business.

Mahre, a Grand Junction High School graduate and prosecutor who was appointed to the board in 2020, said her experience on the board so far and experience in her career as a public servant are to her advantage, particularly her focus on issues related to children.

Jones, the executive director of Grand Valley Youth Football, said the district has lost touch with its mission to focus on children, and parents need to be more involved with the educational process.

Combs, who works for Aspen National Collections, said he has lived in the Grand Valley for 40 years and has three grandchildren in the School District. Combs said he wants to enhance the work the district is already doing, and expand reading, writing and arithmetic while also working on financial health and diversity.

Lema, who owns the Salon Professional Academy, said District 51 students who attend her school lack basic education and skills, and the district should better prepare its students for life after graduation.

The bond would raise property taxes by about $5 per month for a house valued at $300,000, according to Citizens for D51, a group supporting the bond issue.

Asked what the biggest challenge facing District 51 is, DeWitt said mental health issues abounded among students when he was there, and that needs to change.

For Haitz, the biggest challenges are learning loss from the 2020 school year, student proficiency being in decline and teacher morale being low.

Mahre said the district’s most pressing need is to keep kids in face-to- face learning during the COVID-19 pandemic, and being transparent and responsible to the public.

Jones said the biggest challenge for the district is people have lost faith in the educational system, and the district needs to get that back.

Every day in the district there is a different challenge, Combs said, but the biggest challenge is making sure students are either job-ready or college-ready when they leave school.

Lema said the biggest challenge she sees is making sure every student gets a great opportunity for a great education, and to do that the district needs to bring teachers into the fold.

Candidates were also asked how they view the district’s partnerships with Colorado Mesa University. Lema said the schools need to equip students with basic education before they’re ready for the next step.

Combs said there has to be a partnership between the district and CMU, and it’s important to get District 51 students on campus before they graduate from high school so they can better understand the opportunities they have after graduation.

Jones said the district needs to have a partnership with CMU, and also needs to focus on getting local students who get good grades to college, not just athletes who are recruited by colleges.

District 51 has great partnerships with CMU and Western Colorado Community College right now, Mahre said, but those can always be improved.

Haitz said the partnerships should be maintained, but it’s just one piece of what the district should be doing.

Partnerships with CMU are good, DeWitt said, but the district needs to do a better job of giving the students the financial knowledge to make the right decisions regarding college.

For the final question, candidates were asked what one thing, if elected, they would accomplish in their four-year term.

DeWitt said during his term the district would implement more career education training.

Haitz said she would focus on setting kids up for success after they graduate.

Mahre said kids need to feel safe and welcome at school, and the district needs to give every student a path to success.

Jones said he would create a safe haven for kids.

Combs said he would physically go to every school in the district, because it’s important to understand how things are at the actual schools to improve them.

Lema said she would get refocused on delivering the highest quality foundational education.

In her closing statement, Haitz said a great education makes you believe in yourself, and she will focus on futures and include the business community in what the district is doing.

Combs said part of the Grand Valley being a great place to raise a family is providing a great education, and District 51 has teachers who love what they do and are willing to make sacrifices for children. He also said he wants to prevent talent leakage from the area.

Jones reiterated that he feels the district has gotten away from educating the kids, and also said matters of race shouldn’t be taught in schools.

Mahre reiterated her 30 years of public service and passion for kids, and said she offers an outside perspective on the district. She said she wants to make sure every kid feels safe and secure.

Haitz said she wants to work together to focus on outcomes, and that she is personally vested in seeing great outcomes from district students. She said she would like to get a lot of the noise out of classrooms.

DeWitt said he will focus on getting district students ready for college and careers, and give every student the opportunity to be successful.