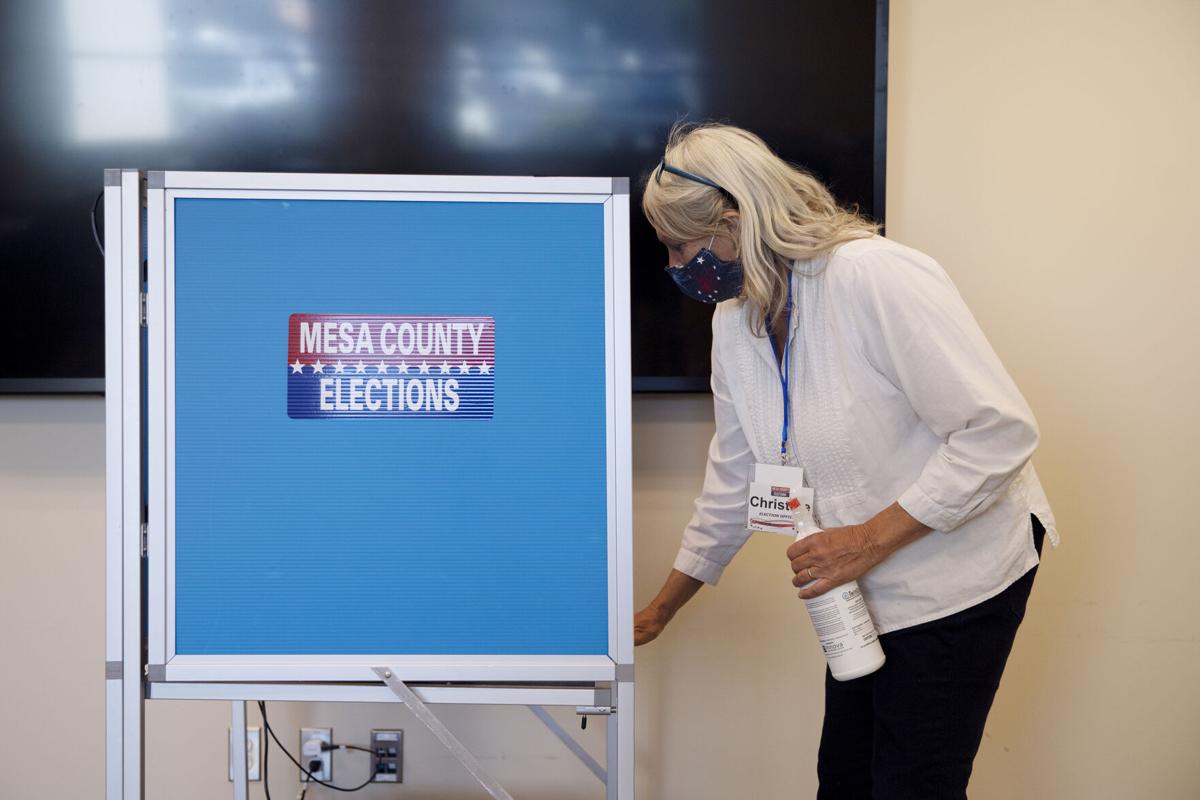 Elections Judge Chris Gardner sanitizes an election booth after a voter used it at the elections office on June 30. 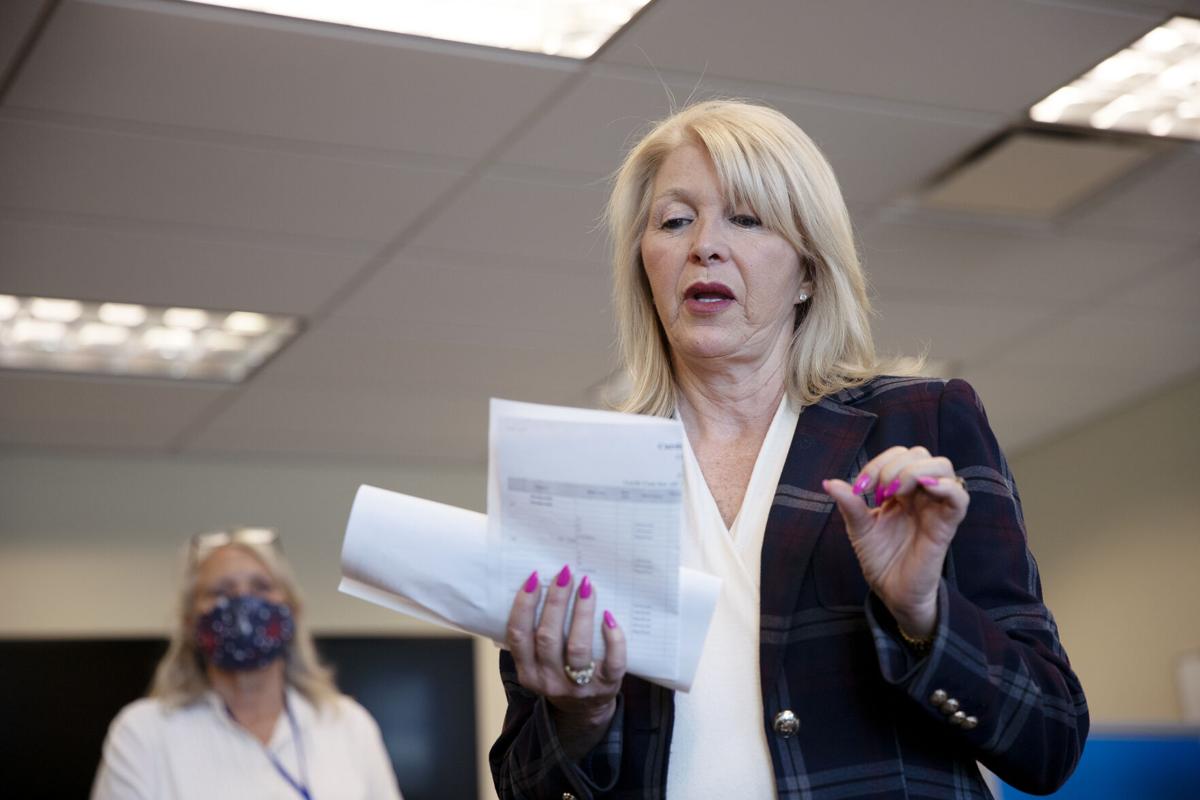 Mesa County Clerk Tina Peters reads an update on the election on Tuesday, June 30, 2020. The county’s election equipment has been decertified and will have to be replaced following a security breach allegedly aided by Peters. 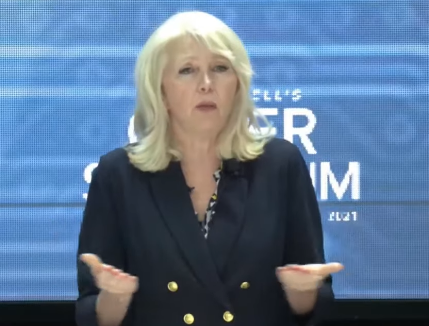 Tina Peters speaks at a symposium in South Dakota that alleged voter fraud in the 2020 presidential election. Her flight to the cybersymposium on a private plane is the subject of a formal complaint filed with the Colorado Secretary of State’s Office.

Elections Judge Chris Gardner sanitizes an election booth after a voter used it at the elections office on June 30.

Mesa County Clerk Tina Peters reads an update on the election on Tuesday, June 30, 2020. The county’s election equipment has been decertified and will have to be replaced following a security breach allegedly aided by Peters.

Tina Peters speaks at a symposium in South Dakota that alleged voter fraud in the 2020 presidential election. Her flight to the cybersymposium on a private plane is the subject of a formal complaint filed with the Colorado Secretary of State’s Office.

Mesa County isn’t just on the hook for replacing all of its expensive election equipment, but also for up to $170,000 in money the Clerk’s Office received in COVID-19 aid, according to the Secretary of State’s Office.

In the wake of Thursday’s announcement from Secretary of State Jena Griswold to decertify the county’s election equipment because of a security breach that Griswold said Clerk Tina Peters had aided, the county may have to spend hundreds of thousands of dollars to replace that equipment.

Some of the money from the Coronavirus Aid, Relief and Economic Stability Act, known as the CARES Act, approved by Congress and signed by then-President Donald Trump in March 2020 went to purchasing some of the now-decertified election equipment.

And some of that equipment is brand new.

A year ago this month, the Mesa County Board of Commissioners approved three grant applications that Peters and her Elections Division had applied for: $70,000 for six electronic ballot marking tablets from Dominion Voting Systems and ballot drop boxes, $69,996 for 22 additional Dominion voting tablets, and $10,000 for a new drop box and security equipment in Palisade.

All of that equipment came from CARES Act funding, and all of the requests came from Peters, who now is publicly challenging whether Dominion voting equipment is reliable.

Because that equipment was paid for through grants provided by Griswold’s office, some of it may have to be paid back to the state, and the county will have to use its own money to replace them.

And that only accounts for about half of the equipment that was decertified, and not even the most expensive items, such as computer servers, ballot scanners and computer towers. In all, 41 individual pieces of equipment were decertified. Because they are considered tainted, they cannot be salvaged as election equipment in Colorado or likely elsewhere in the nation.

The cost of replacing those are not yet known, nor is whether the county would still be on the hook for thousands of dollars in annual lease agreements for equipment it no longer can use. Still, initial costs for some, if not all, of the equipment could be as high as $600,000, according to some county and state records.

Instead of complying with Griswold’s order that could have saved taxpayers all that money, Peters ignored it and instead flew to Sioux Falls, South Dakota, to speak at a voter-fraud conspiracy theory event hosted by My Pillow guy Mike Lindell, a staunch Trump supporter who has repeatedly made oft-debunked claims that the election was stolen.

All this started nearly a week ago when Griswold’s office issued a direct order to Peters to prove that the equipment hadn’t been compromised by a somewhat mysterious person Peters had allowed into secure areas of her office.

That person, identified as Gerald Wood, had access to the equipment, and was the apparent source of leaking special secure passwords maintained and controlled by the Secretary of State’s Office.

While county clerks and county elections officials don’t have access to those codes, they can be viewed by them during inspection and software upgrade times.

That is what appeared to happen on May 25 when state officials were helping county election workers, Peters and Wood included, upgrade certain equipment.

At the time, Peters told those state workers that Wood was one of her employees, but Griswold said on Thursday that has proved to be a lie.

Secretary of State personnel were first alerted to the security breach earlier this month when Wood apparently turned over pictures and video he had illegally taken to a voter fraud conspiracy theorist, who later put them on social media claiming that it proved Dominion had the ability to remotely access the state’s election equipment.

Griswold said that is not true, adding that each county operates independently of others, and that no one outside her office has access to the codes, which are specific to each of the state’s 64 counties. She also said that someone would have to be in direct contact with election equipment — and not remotely — to use the pass codes to access a county’s election systems.

The Secretary of State’s Office also said it is not known exactly how much access Wood had to the equipment — he had his own swipe card that allowed him access to secure areas and had copies of the state passwords — or what he might have done, such as altering software, adding malware or placing his own private passwords into them.

Griswold also said she now has evidence that the equipment wasn’t properly protected with tamper-proof seals until a day or two after they were upgraded, as is required.

Further compounding the issue is that Peters or one of her staff ordered surveillance cameras to be turned off before that May upgrade, cameras that weren’t turned back on until earlier this month, Griswold said.

On Friday, Mesa County Commissioners held another executive session to discuss legal matters surrounding Peters and her elections office, and discussed pending negotiations about the county’s contract with Dominion.

Because of the upcoming fall election, and strict deadlines for complying with any election, the county only has until Aug. 30 to replace its equipment, or plan to hand count each ballot, a process that would take hours longer than normal.

It also is unknown if the Secretary of State’s Office will trust Peters to oversee that election, or any subsequent one. While it doesn’t have the power to remove her, it does have the authority to take over control of a county’s election process.

During the June 2020 primary, Griswold had assigned a special observer to watch over Peters because of 574 ballots that were discovered in February 2020 during the presidential primaries. Those ballots, which were cast during the November 2019 general election, had not been picked up from a drop box located just a few feet from the front door of Peters’ main office until months later.

That observer, now Eagle County Treasurer and former Eagle County Clerk Teak Simonton, told Griswold in her subsequent report about that election that while the clerk’s election staff was courteous and professional, Peters was “distrusting, frequently rude and antagonistic.”

Officials in Griswold’s office said they are working with more reliable Mesa County officials about the matter in an effort to help the county conduct a safe and secure election this fall.

The county commissioners said they, too, are doing what they can legally to make that happen, but are limited by law on what actions they can take because Peters is directly elected by voters.

“There are still many unanswered questions, and the board is working closely with legal counsel to understand facts and determine the next steps,” a county spokeswoman said Friday.

“The board’s focus continues to remain on ensuring the integrity of the voting process in Mesa County,” the spokeswoman added. “A county clerk in Colorado is an elected position. While the executive session was informative, the board is still working with legal counsel to understand facts and determine the board’s authority in this matter.The board is committed to taking the appropriate steps for a secure election process.”

Commissioners Janet Rowland, Cody Davis and Scott McInnis haven’t called for Peters to resign because they said she is innocent until proven guilty.

Meanwhile, the Mesa County District Attorney’s Office also is investigating the matter, which could lead to felony charges, either against Peters, Wood or others.

The status of that investigation is unknown, but an investigator in District Attorney Dan Rubinstein’s office has already executed search warrants in relation to that investigation, and has access to some of the same evidence that Griswold revealed last week.