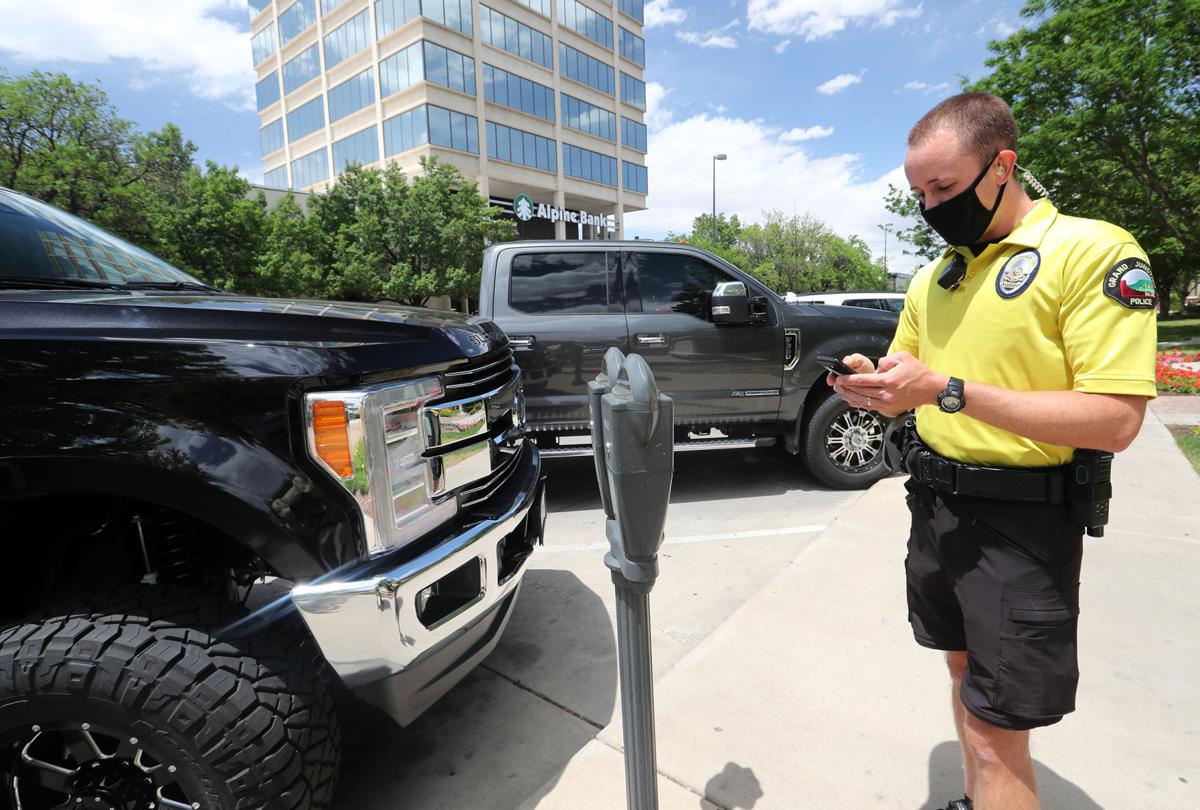 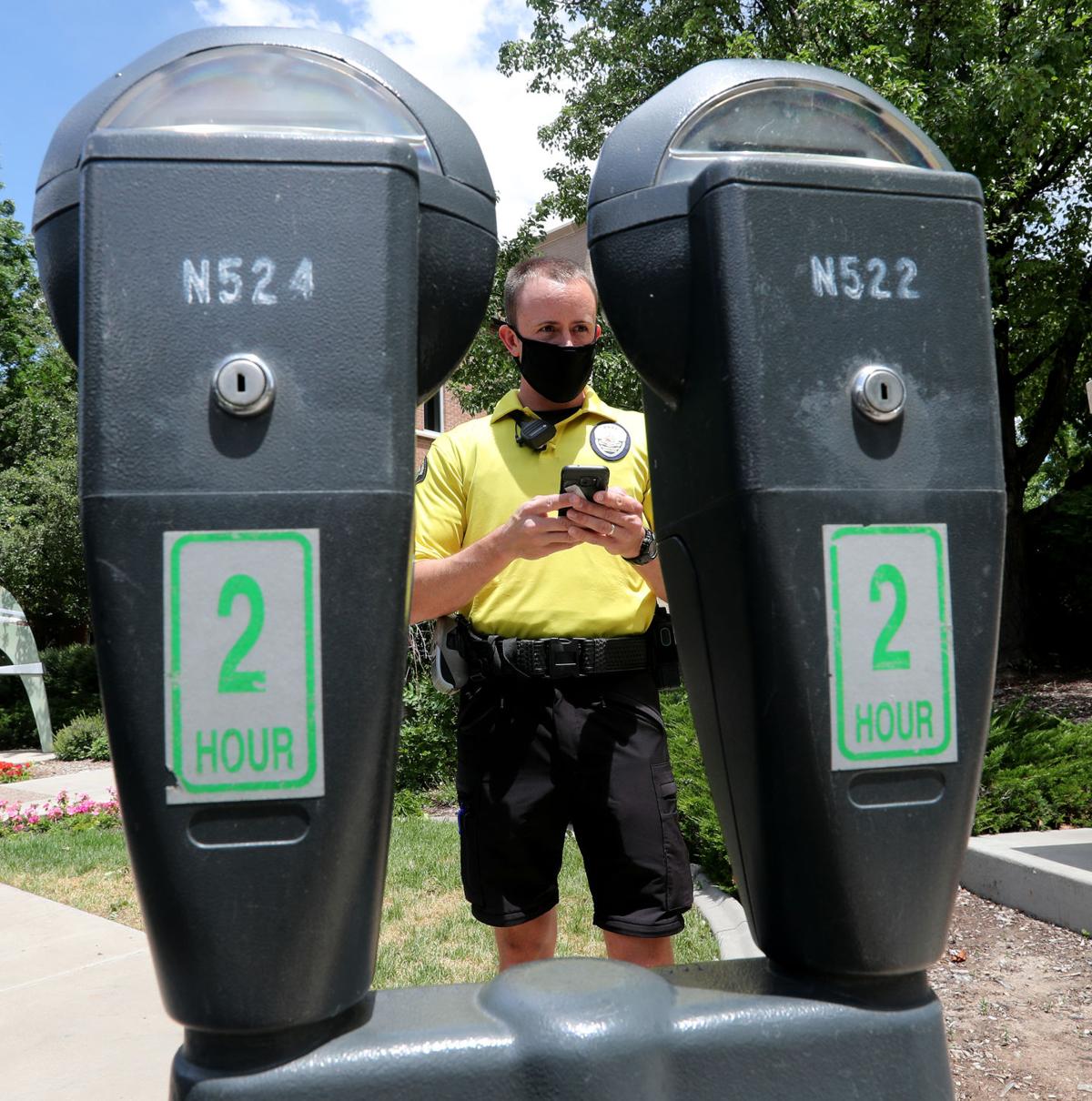 Benjamin Benedict, a parking compliance officer for the city, writes a ticket in downtown Grand Junction this week. 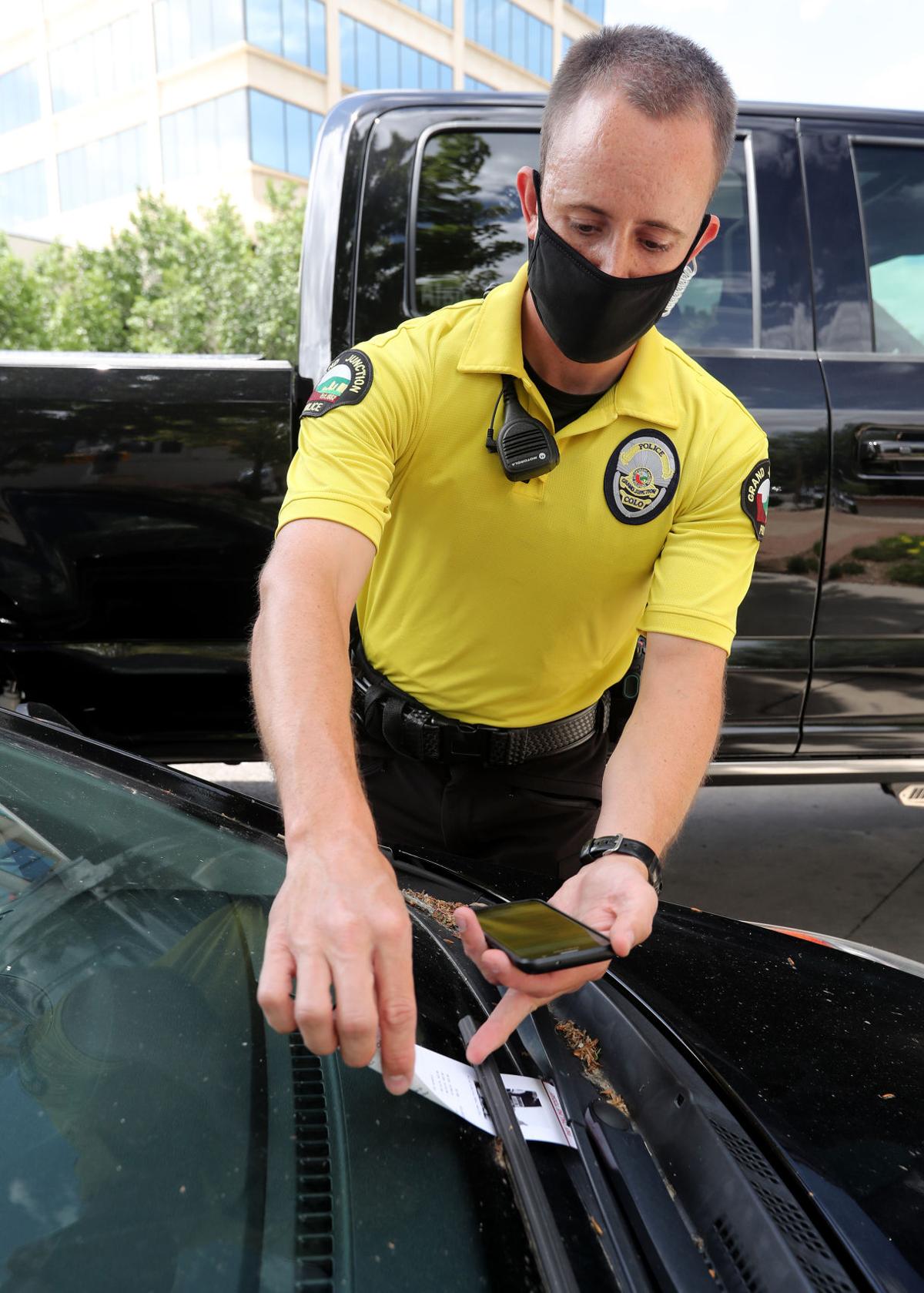 Benjamin Benedict, a parking compliance officer for the city, writes a ticket in downtown Grand Junction this week.

Paid parking returned to downtown Grand Junction this week as drivers with blinking meters may have noticed a familiar slip on the window of their car upon their return.

“For the past couple of months it’s practically been a ghost town,” said Grand Junction Police Department Sgt. Rich Roquemore, who supervises the GJPD Parks Patrol. “Parking enforcement kicked back up Monday.”

“We’re gradually getting back into it, assisting in town with traffic complaints and we want to be highly visible out there doing that,” he said.

Designed to stand out, the Police Department’s yellow-shirted, sometimes bike-mounted Parks Patrol officers perform a variety of different patrols for the city, including downtown parking enforcement.

“I think they expected us to come back at some point but just not this soon,” said Benjamin Benedict, one of three Parks Patrol officers for the city. He’s already been out on Main Street and around downtown Grand Junction this week handing out tickets for expired meters.

While a few quarters might not seem like much, to be shut down as long as it was eventually adds up.

After generating nearly $38,000 from parking fee totals in March 2020, that number dropped to just over $9,000 in April and around $8,400 in May. Parking fee totals refers to meter and parking app revenues.

Parking fee totals earn an average of around $222,000 from January to May annually, but for this year, total parking fees revenues are just under $148,000.

Grand Junction parking is an enterprise fund and the revenues generated cover the costs associated with the entire operation and garage.

While downtown parking begins at 8 a.m. and ends at 4 p.m., Benedict said he never takes the same route twice and tries to be spontaneous when patrolling downtown parking.

“Doing the same pattern at the same time every day, we are going to get people that pay only during the time they know we’ll be patrolling,” Benedict said. “We are able to reach out to more people doing different spots.”

Grand Junction has over 1,000 meters, 180 time-limited parking spaces and 448 parking spaces, 126 of which are available for daily parking, in the parking garage located in the 400 block of Rood Avenue.

When downtown Grand Junction moved to free parking in mid-March, the Parks Patrol shifted their focus.

“We focused a lot of our time in the parks during the downtown parking break. We interacted with folks exercising or using some of the closed facilities and helped them follow the rules,” Benedict said.

Additonally, Roquemore said during the closure, some Parks Patrol staff were sent to Chick-fil-A to help out with some of the traffic congestion seen around Rimrock Avenue as a result of in-restaurant dining being closed.

“No two days are alike,” Roquemore said. “We have them at parks, we have them at special events. It’s a combination of both enforcement and patrol.”

With paid parking returning, Benedict isn’t the only one returning to normal patrol as downtown drivers should expect higher visibility enforcement.

“We try to be dynamic and focus on where the need is,” Roquemore said.

Patrols and enforcement downtown are picking up as drivers get behind the wheel again after months locked down.

“I don’t know if skills are down but I’ve noticed a noticeable increase in crashes lately,” Roquemore said.

While crashes have decreased along Ute and Pitkin Avenues, with 13 crashes reported in 2020 through May, Ute and Seventh Street proved to be a hot spot with two rollover crashes in February and April, including one involving a police cruiser outside the GJPD building.

“There’s no specific place, crashes happen everywhere… I didn’t notice any fatal accidents during the closure but we’re picking up visibility and will be all over downtown,” Roquemore added. “We have four motorcycle officers doing enforcement and I track high speeding and crash areas religiously and monitor school zones.”