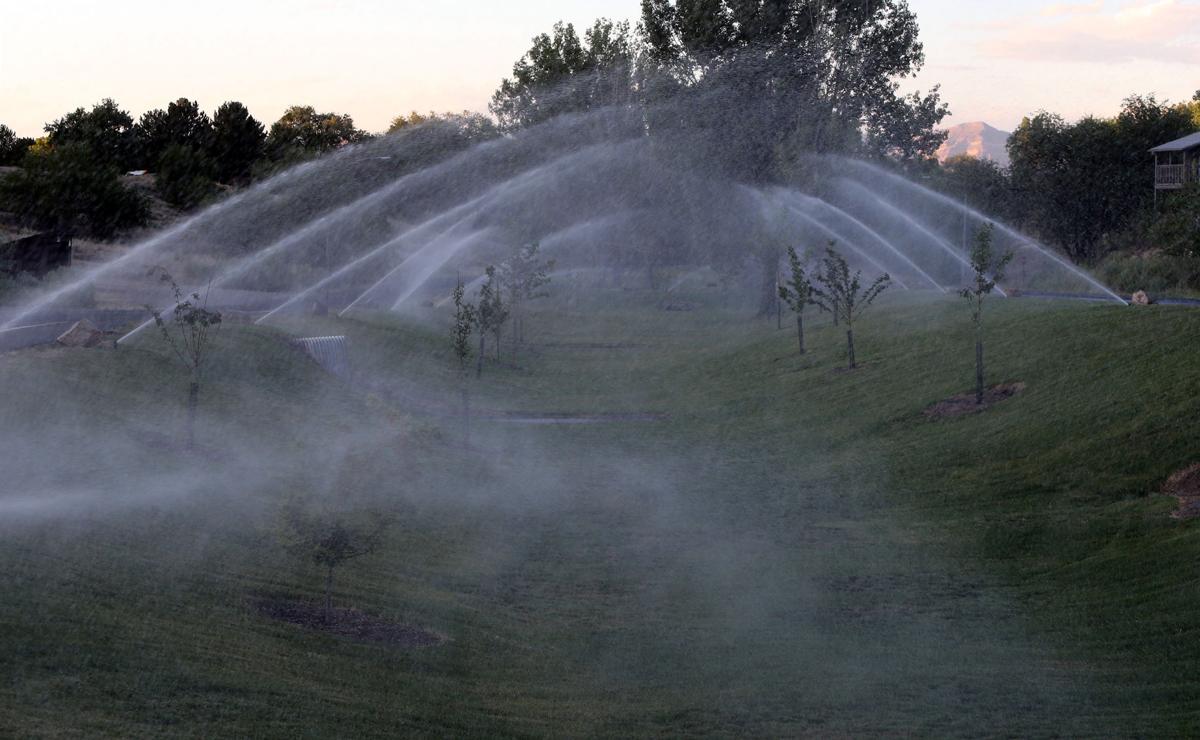 Irrigation water from a sprinker in the median of Ridges Boulevard. 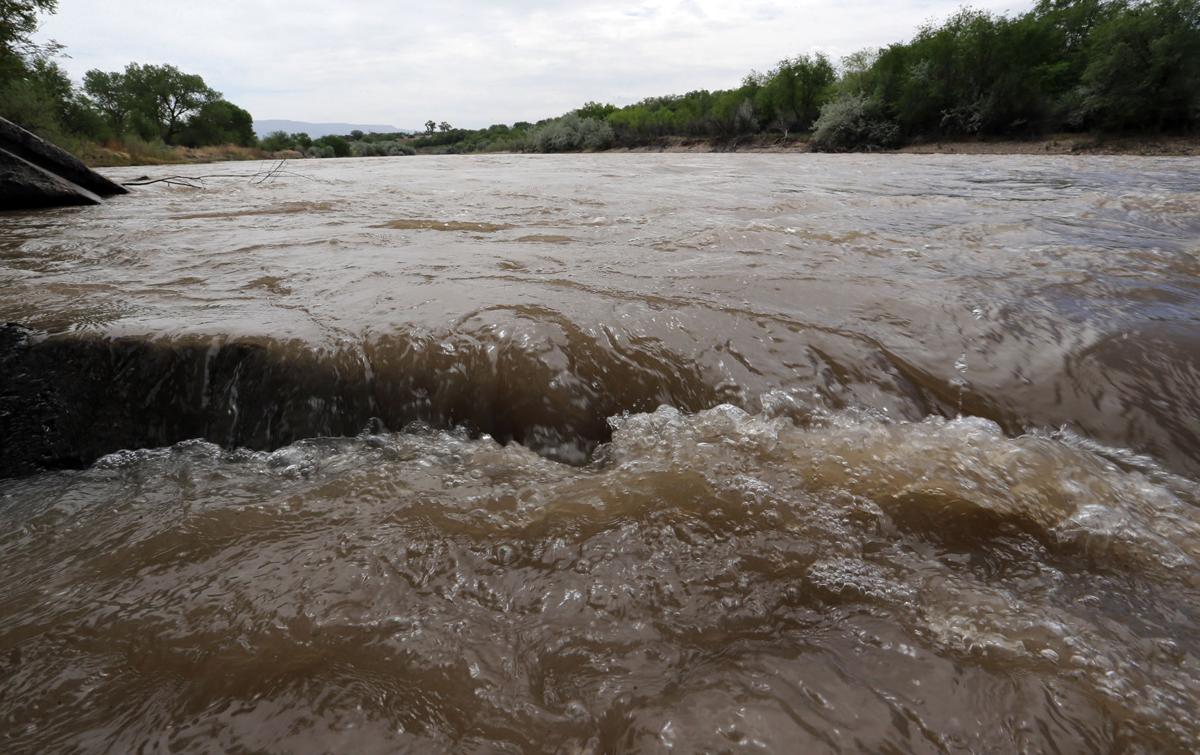 The Colorado River through Grand Junction is picking up volume as the weather warms and the mountain snowpack runoff begins. The combination of sparse spring moisture and quickly warming temperatures have left western Colorado in a severe drought, according to the Colorado Climate Center. 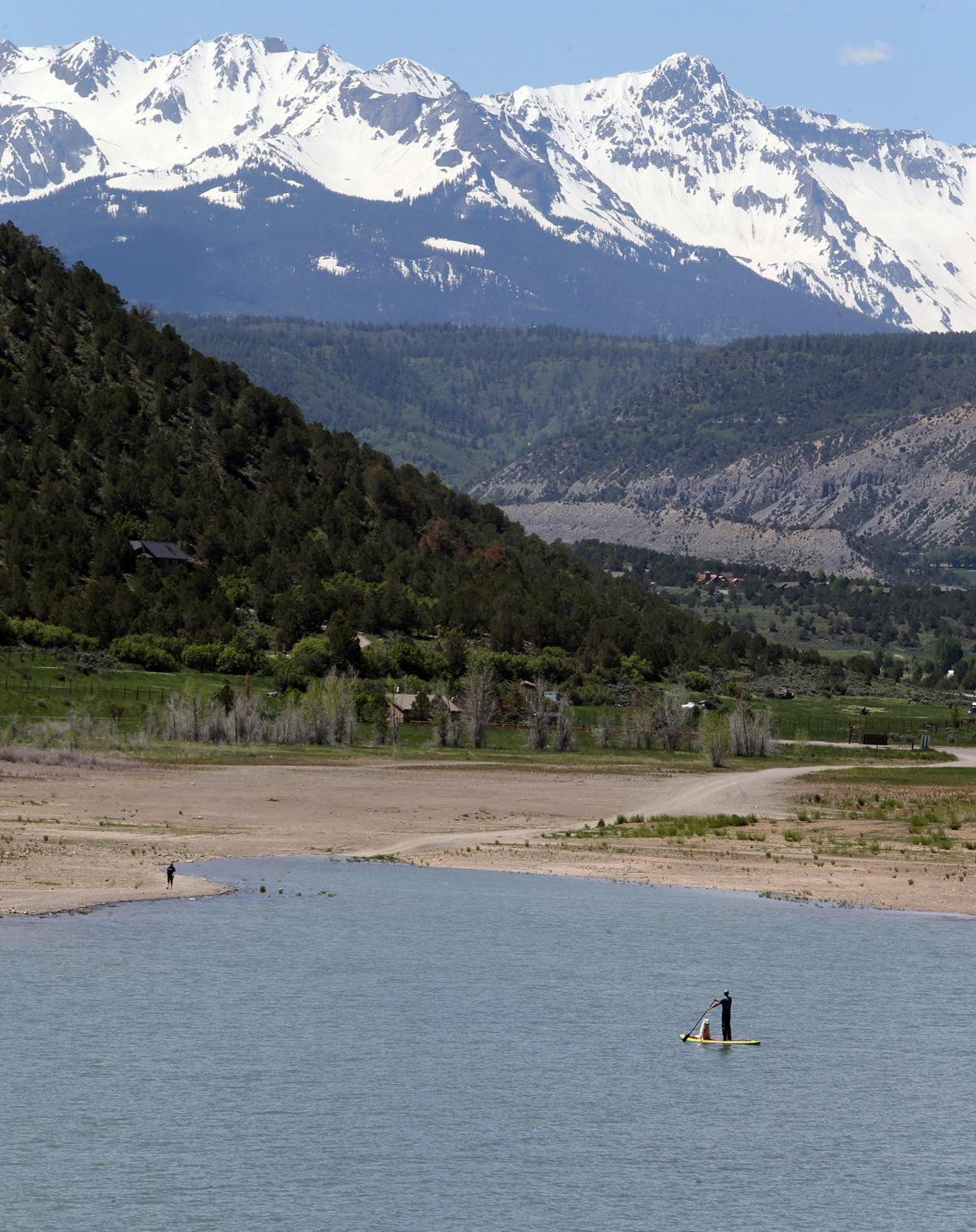 A paddleboarder and dog on Ridgway Reserivor with the snow covered San Juan Mountains in the background. 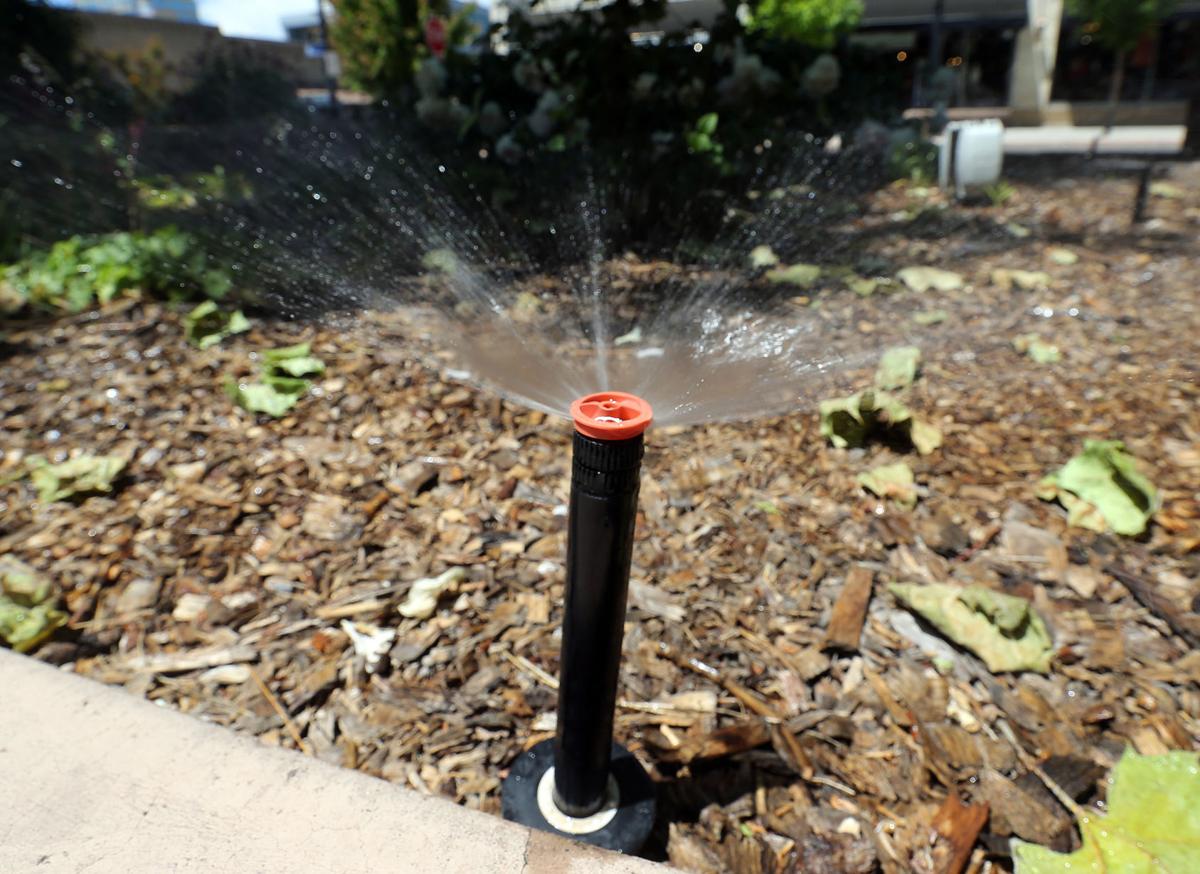 Irrigation water from a sprinker in a downtown Grand Junction flower bed. 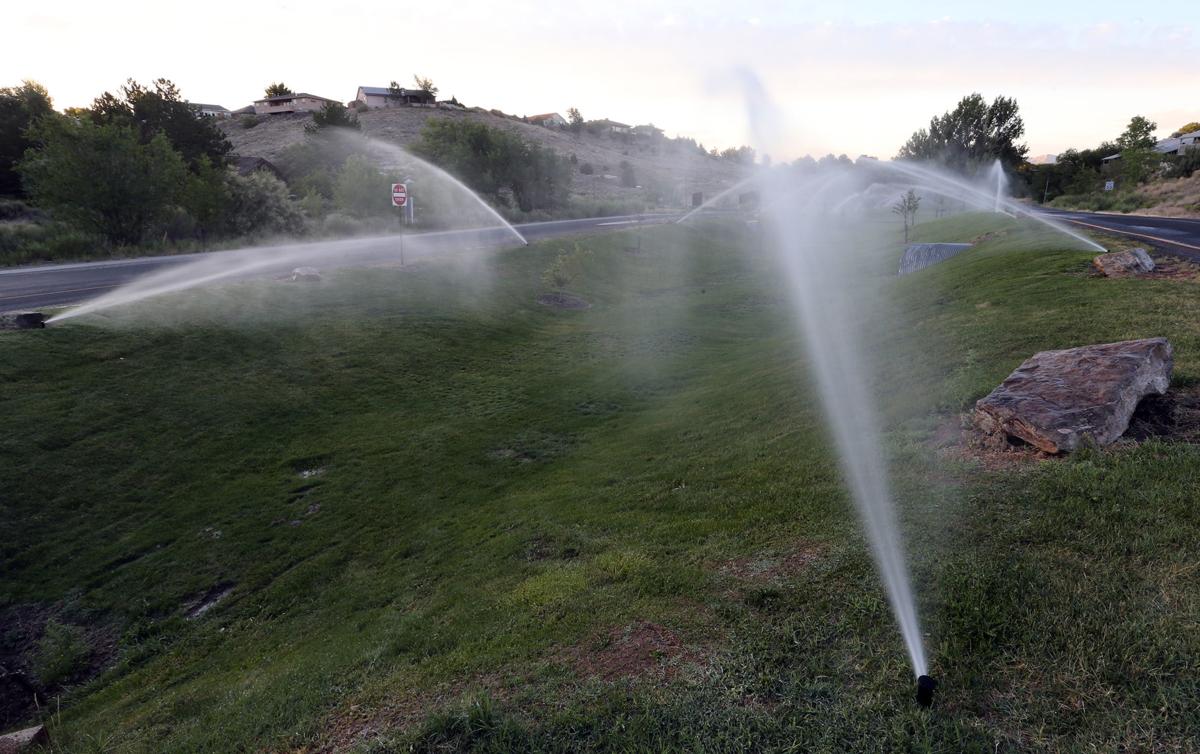 Irrigation water soaks the grass in the median on Ridges Boulevard.

Irrigation water from a sprinker in the median of Ridges Boulevard.

The Colorado River through Grand Junction is picking up volume as the weather warms and the mountain snowpack runoff begins. The combination of sparse spring moisture and quickly warming temperatures have left western Colorado in a severe drought, according to the Colorado Climate Center.

A paddleboarder and dog on Ridgway Reserivor with the snow covered San Juan Mountains in the background.

Irrigation water from a sprinker in a downtown Grand Junction flower bed.

Irrigation water soaks the grass in the median on Ridges Boulevard.

“April is normally one of our wettest months,” said Dan Cuevas, a technician for the National Weather Service in Grand Junction.

But Grand Junction got only 0.20 inches of precipitation during the last month, a fraction of the 0.91 inches that is the normal amount for April. Last month tied with several other Aprils in which Grand Junction got a fifth of an inch of rain, and they rank in the mid-teens on the list of driest Aprils in the city in data going back to 1893.

Much of western and southern Colorado “saw the driest or one of the driest Aprils on record,” according to a weekly assessment put out by the Colorado Climate Center at Colorado State University.

Cuevas said Montrose got only 0.15 inches of precipitation in April, compared to a normal 0.97 inches there for that month.

Mineral County in southwest Colorado was among places having record-low precipitation in April, according to National Oceanic and Atmospheric Administration data, said Becky Bolinger, assistant state climatologist at the Colorado Climate Center. Mesa Verde National Park got absolutely no precipitation for the month, tying a record set in 1989, she said.

Mesa County and surrounding areas are already in moderate drought, according to the U.S. Drought Monitor. But the Colorado Climate Center assessment is recommending a severe drought categorization for eastern Mesa County, Delta, Gunnison and eastern Montrose counties, as well as some counties farther south, and it is recommending parts of southwest and southern Colorado be deemed as being in extreme drought. The assessment says Garfield, Rio Blanco and Pitkin counties also should be considered for moderate-drought status.

Colorado’s snowpack was right around 100% of median in mid-April, about the time that the state’s seasonal snowpack normally peaks. But by Wednesday it had fallen to 79% of the median for May 6, according to the Natural Resources Conservation Service. Levels in northern basins remain fairly strong, with the Upper Colorado River Basin at 90%. But the Gunnison basin is now at just 60% of median, river basins in far-southwest Colorado are combined at only about half of normal, and the Upper Rio Grande is at only 35% of median.

“With little snow in April and a quick warmup, the snowpack is melting quickly,” this week’s assessment says.

Bolinger said the Gunnison Basin as a whole had an average of 14 inches of snowpack less than two weeks ago, but that is now down to seven inches, a level that normally wouldn’t be seen till late May.

Snowpack on Grand Mesa lagged well below normal this winter and now some NRCS measurement sites there are quickly drying out. The Overland Reservoir site has just 0.2 inches of snow-water equivalent remaining, just 3% of normal, and the Mesa Lakes site is at 22% of normal, while the (Trickle) Park Reservoir site is doing comparatively far better, at 71%.

April weather locally will be remembered in part for a low temperature of 19 degrees April 14 that devastated the prospects for this year’s local fruit crops. But the month ended on April 30 with a high of 89 degrees, tying the record high for that day. The first day of May had a high of 88 degrees, again tying that date’s record high.

Cuevas said a high-pressure system was the cause of not just a lack of precipitation but warm temperatures, “which always seems to exacerbate the dryness.”

On Wednesday the National Weather Service had red-flag fire warnings in place for a fair amount of western Colorado, and a fire weather watch was in place for today, Cuevas said. Dry vegetation, low relative humidity and breezy to windy conditions are combining to raise fire danger.

This week crews had to respond to a wildfire in the national forest southwest of Carbondale that was caused by an abandoned campfire. Campfires and charcoal fires are currently prohibited on national forests in Colorado due to concerns about potentially having to divert resources from responding to COVID-19.

Possible local moisture is in the forecast for next Monday into Tuesday, Cuevas said.

Bolinger said she isn’t expecting a turnaround of conditions in May and into June, and water supply forecasts based on spring runoff are plummeting. Even earlier, those forecasts had called for below-average streamflows due to dry soil conditions going into winter.

“I think we’re lucky that we had such a nice boost last year in terms of water supply because that’s money in the bank that will help hold (water users) over,” she said.