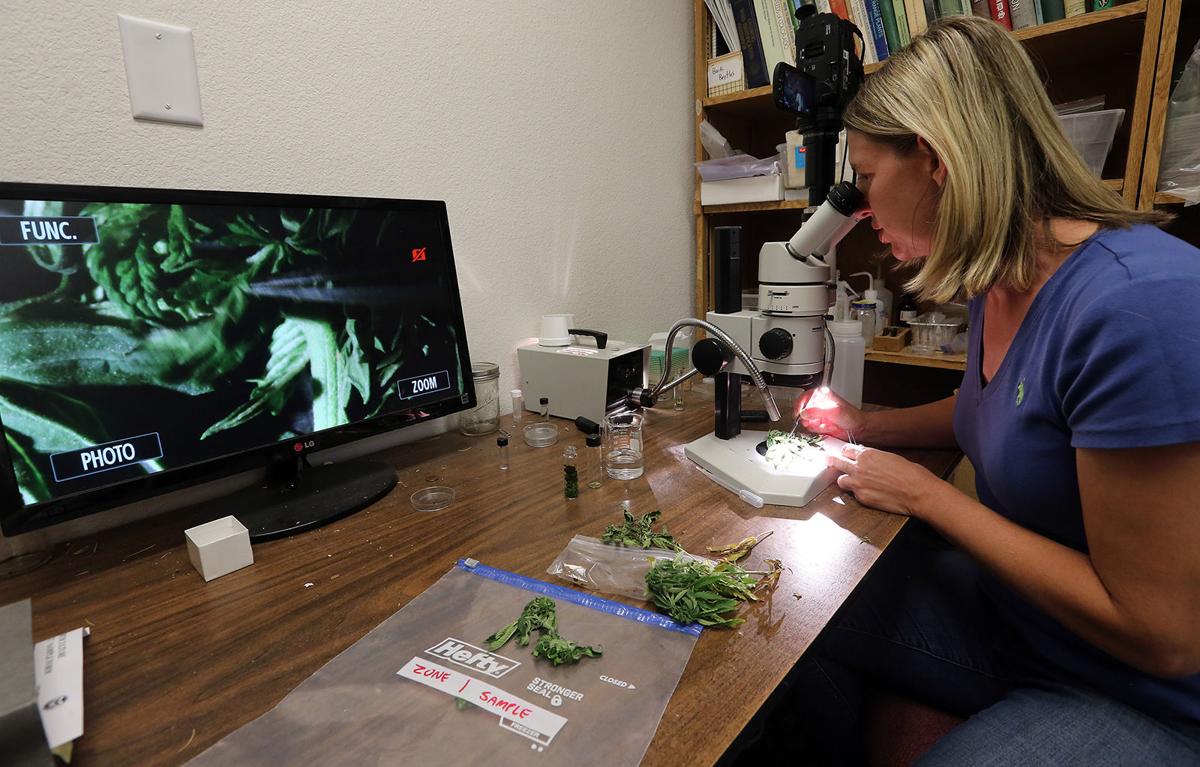 Entomologist Meredith Shrader studies a hemp plant under a microscope at the Colorado State University Extension Service in Grand Junction. Elm seed bugs are one of several insects annoying Grand Valley residents this summer, Shrader says. "People are at their wits' end" to be rid of them.

Entomologist Meredith Shrader studies a hemp plant under a microscope at the Colorado State University Extension Service in Grand Junction. Elm seed bugs are one of several insects annoying Grand Valley residents this summer, Shrader says. "People are at their wits' end" to be rid of them.

Grand Junction is playing host to a rare event that might make your skin crawl — a population boom in false chinch bugs.

These small, grayish insects typically are few in number, but can sometimes explode into a population of millions seemingly at random, said Colorado State University Extension Entomologist Meredith Shrader, who holds a doctorate in entomology.

"We had an outbreak of them, and they were moving in the millions," Shrader said. "The ground was literally moving because there were so many of them."

The bugs feed on wild mustards, which are abundant in fields around Mesa County, Shrader said, and insecticides are ineffective against them.

Scared yet? Don't be. The false chinch bug is harmless to humans and plants; therefore, it is not a public health concern. It also has a short life cycle, which means that because the outbreak began two to three weeks ago, most will be gone within a couple weeks.

Population booms in false chinch bugs are relatively rare, only happening once every decade, Shrader said.

"It's a once-in-a-blue-moon outbreak," Shrader said. "Once every eight or 10 years you get this massive influx. There are people that have lived in Grand Junction their whole life and they've never seen an outbreak."

The Grand Valley is also dealing with the ongoing invasion of elm seed bugs. This invasive pest first arrived in Colorado in 2017, Shrader said. It is harmless to people and animals, but is an annoyance.

According to an 2018 article written by Dennis Hill, the Sentinel's garden columnist, the elm seed bug is native to Europe and was first detected in Idaho in 2012. Since then, it has spread to Oregon, Utah and western Colorado.

Grand Junction resident Jason McGlynn is certainly annoyed with the ones that have shown up at his house near Horizon Drive, calling it "ground zero for the little buggers."

"When you want to go sit on the patio, you can't," McGlynn said. "When you're grilling, they're on you. When you're mowing the lawn, they're hitting you. They get in your hair, in your mouth."

McGlynn said he has a pest control company spray once a month, but the bugs are still present in large numbers at his home. His morning routine now includes vacuuming the bugs up around the house.

Shrader said she does not recommend spraying within your home for the bugs, but spraying outside can reduce their numbers.

The bugs feed on elm seeds during April and May, which are abundant in the Grand Valley. Unfortunately, removing elm trees on your property won't do much to reduce the number of bugs since they are highly mobile, Shrader said. In the summer the bugs enter homes seeking cooler temperatures. They also use homes to overwinter and can come out during warm winter days. Shrader said reducing the ways the bugs can enter your home is a good preventative step — caulking or taping around windows.

"People are at their wits' end trying to find something that works," Shrader said. "Unfortunately, there is no silver bullet. It's using a multi-pronged approach."

Another pesky pest that can be a nuisance, especially for people hoping to have a nice lawn, are the masked chafer and June bugs.

Shrader said the bugs will soon be laying eggs and when those eggs hatch, the larvae can cause damage to lawns and turf.