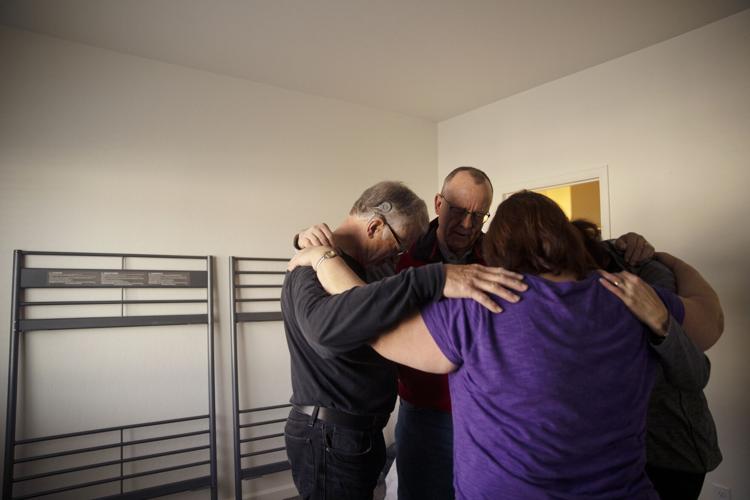 Clockwise from left, Jeff Harmeling, Dennis Hill, Mary Harmeling and Theresa Bloom pray for the safety for the people of Afghanistan and the families resettling in Grand Junction, while setting up a bedroom in an Afghan family’s new home. 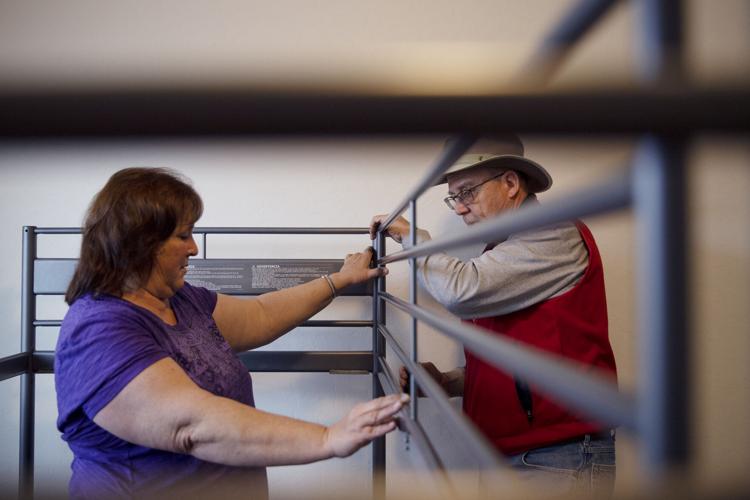 Theresa Bloom, left, puts together a bunk bed with Dennis Hill, while setting up a new home for an Afghan family. 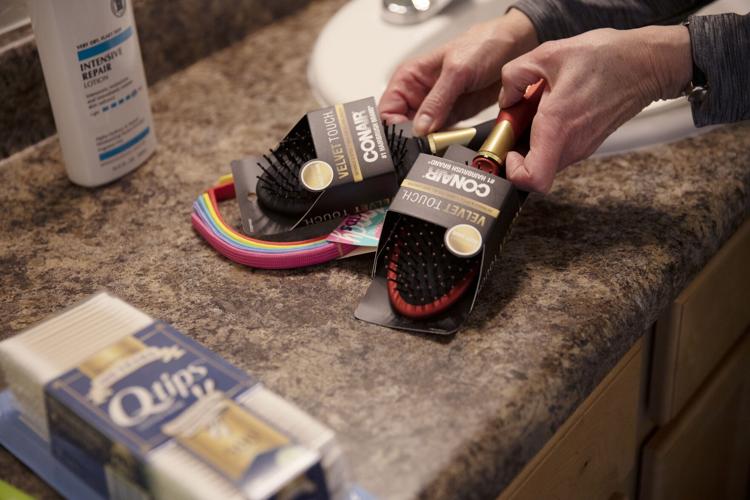 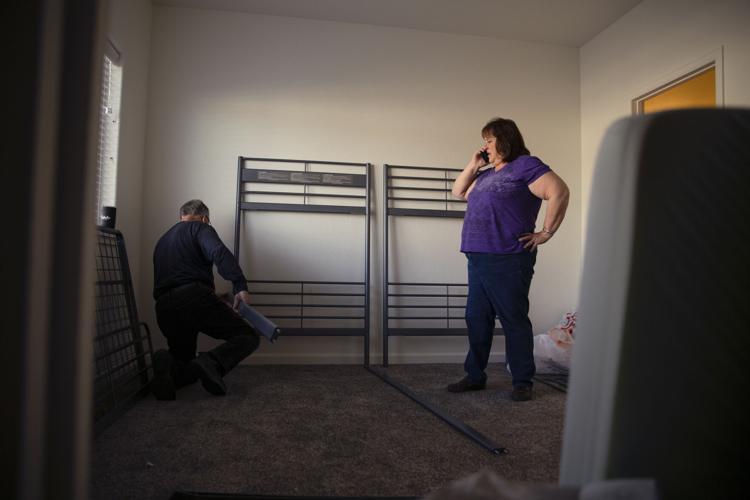 Theresa Bloom, the leading fundraiser for the Grand Valley Resettlement Program, right, calls her daughter on the phone to help set up a bunkbed frame with Jeff Harmeling, left, in the new home of an Afghan family on Wednesday, Feb. 16.

Clockwise from left, Jeff Harmeling, Dennis Hill, Mary Harmeling and Theresa Bloom pray for the safety for the people of Afghanistan and the families resettling in Grand Junction, while setting up a bedroom in an Afghan family’s new home.

Theresa Bloom, left, puts together a bunk bed with Dennis Hill, while setting up a new home for an Afghan family.

Theresa Bloom, the leading fundraiser for the Grand Valley Resettlement Program, right, calls her daughter on the phone to help set up a bunkbed frame with Jeff Harmeling, left, in the new home of an Afghan family on Wednesday, Feb. 16.

It was before Kirk Yamaguchi’s time, but the stories passed down to him stayed with him forever.

His father’s family had a farm in California until the height of World War II. In the wake of the attack on Pearl Harbor, the U.S. government allowed racism and xenophobia to seep deeply into its national response, as hundreds of thousands of people of Japanese descent were rounded into internment camps. Yamaguchi’s family was among them, spending three years in a camp in the Arizona desert.

When they were released near the end of the war, they sought a new life in Denver, needing community support to reestablish themselves after three years of lost freedom.

That dark, uncertain period in Yamaguchi’s family history isn’t the primary reason the now-Canyon View Vineyard Church pastor and much of his congregation are sponsoring the first family to arrive in the Grand Valley after having to escape the horrors of the Taliban’s rule in Afghanistan. It’s certainly been in the back of his mind since he first received word that some families fleeing Afghanistan would be relocating to the Western Slope, though.

“When they got out of camp, the governor of Colorado at that time said, ‘You are American citizens. You’re welcome in Colorado.’ Since they didn’t have anywhere else to go, they went to Denver,” Yamaguchi said. of his family. “The community in Denver helped them to get relocated and integrated into the whole community there, finding jobs and starting over. It was a real personal kind of thing of thinking of what my family might have been experiencing when they got out of camp and moved to Denver.”

When the United States military left Afghanistan late last summer, the Taliban seized control of the nation seemingly overnight. For Grand Junction’s Bob Hedlund, the CEO and President of Joint Development Associates (JDA) International, this meant many people he’s known for years had suddenly been thrust into danger.

Through his organization, a nonprofit humanitarian group that’s been partially funded by the government, Hedlund has worked in rural areas of Afghanistan and Uzbekistan to improve local agriculture, education and health resources for decades, acquiring many allies to join the mission along the way.

Once the Taliban took over, JDA International embarked on a mission to evacuate 1,400 people from the country, many of whom he’s worked with. Through JDA International’s newly established Grand Valley Resettlement Program, nine families are planning on calling the Grand Junction area their new home.

The first of those families arrived Feb. 13, after spending six months at a U.S. military camp, a requirement for all families who are moving into the country through JDA International’s efforts.

“Yesterday, when we went to the airport to help pick them up, it was a young family of a husband, wife and three kids, (aged) 10, 9, and 7,” Yamaguchi said.

“It was very heartwarming to actually see them and know that our church has just responded so favorably to welcoming these people into our community to love them and support them.

“It’s really a wonderful thing that we could be a part of this. Very humbling to know that the Lord would use us to do this.”

Hedlund attends Canyon View Vineyard Church with his wife, which is why it was the first church he told about the coming refugees and how the church could help.

The result was the creation of the Grand Valley Resettlement Program, a coalition of approximately 130 community members from across the valley to help welcome the new family and help them adjust to life in a foreign land.

“We have about 12 different resource committees from transportation to housing to medicine to ESL, education, government, government applications for banking, social security, those types of things,” Hedlund said. “It’s a real steep learning curve that we’re doing, but it’s something I feel really responsible for because these people have served me for so many years in Afghanistan and they were persecuted under the Taliban. I just really want to help them have a fulfilling life in the U.S.”

Hedlund said that the families moving to the United States are special immigrant visa applicants who are in the process of receiving green cards because of their work with JDA International. These families will have work authorizations and social security numbers.

Among the many ways the Grand Valley Resettlement Program is helping this family, beyond assistance with moving into their new apartment with furnishings, assistance with handling U.S. currency, transportation, enrolling in school and having access to doctor’s visits, is providing volunteers who will help the wife and kids learn English as a second language.

“Most of the families that I’m bringing here were some of my top people in Afghanistan,” Hedlund said. “Most of them have very good English skills, lot of backgrounds in agriculture as well as administration, and I think they’ll have no problem finding jobs here and growing in their employment.”

JDA International and Grand Valley Resettlement Program are also now under the co-sponsorship of the Denver-based and government-funded ACC Resettlement Agency, meaning they’ve been receiving assistance from the agency since these resettlement plans began to solidify in mid-December.

However, to make all the assistance for this family possible, it took more than ACC Resettlement Agency backing. Fundraising has been a core element of each step of this process, going back to JDA International needing to raise funds to fly refugees out of Afghanistan last year.

That’s where Theresa Bloom, the leading fundraiser for the Grand Valley Resettlement Program, comes into play.

Bloom is the owner of Little Blossom Publishing and Consulting and the co-founder of the Bloom Where You Are Planted scholarship fund in honor of her late husband, Karl, that’s aimed at encouraging more extracurricular activities for District 51 students.

She even recently released a book about fundraising, “Fundraising That Works.”

It was a fortunate circumstance for the Grand Valley Resettlement Program that she also attends Canyon View Vineyard Church, where she learned about the program and what it would need to succeed.

“There’s a lot of different aspects (to the fundraising),” Bloom said. “We’re doing an online campaign, a social media campaign, we’re writing grants and looking at corporate sponsors. The furnishings piece of it, which was a huge chunk of the money — it was about 60% of what we needed to raise — originally, the thought was, ‘Oh, we’ll gather enough money to be able to afford this.’ We came up with the idea of putting it out there online for people to donate the things that we needed. We had a very specific list that we gathered for this family.”

Luckily for Bloom and the resettlement program, at no point since these efforts reached a community-wide level have the necessary donations or funding been difficult or lengthy to obtain.

In the week before the family arrived, the Grand Valley Resettlement Program posted its list of items and donations for them on Saturday.

By Thursday, the program had everything it needed to welcome the newest Western Slopers.

“It’s a God thing. It’s an amazing team of people,” Bloom said. “This community just has such an incredible heart for reaching out and embracing people from different cultures. We were able to gather all the furnishings we needed for this first family and some things have started for the next group that’s coming in in under a week.”

JDA International’s work to bring refugees from Afghanistan isn’t complete quite yet.

While the family that recently arrived as well as many others who have moved into other parts of the country or are still being processed in U.S. military camps were processed out of Doha, Qatar, rather smoothly, Hedlund said there are still 568 people the organization rescued who are waiting in the United Arab Emirates, and that arranging their next moves is proving difficult.

Those who have made it to the United States with dreams of a future in Western Colorado, though, can count on an extensive support network to help them transition to their new lives.

“These people have been uprooted from their homeland and they’re coming to Colorado,” Yamaguchi said.

“I just can’t think of a more amazing thing to think of than that this family’s been given a new chance in life, and as a representative of Jesus Christ, I think it’s the thing we’re supposed to do.”

In February, a family of refugees from Afghanistan arrived in Grand Junction, their transition to a new life supported by a pair of community …

Partly cloudy skies during the evening will give way to cloudy skies overnight. Low 47F. N winds shifting to E at 10 to 15 mph.

Inspiring the next generation