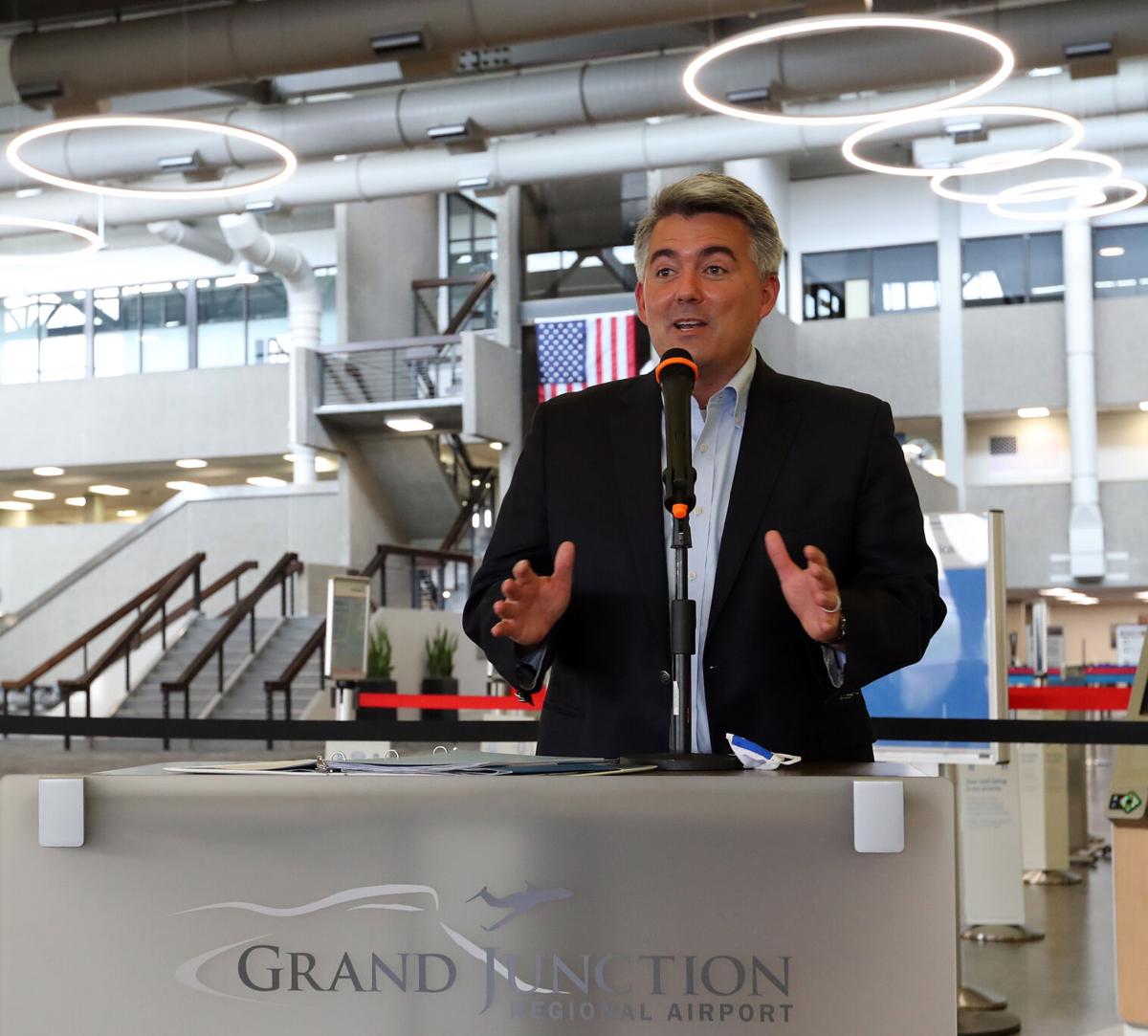 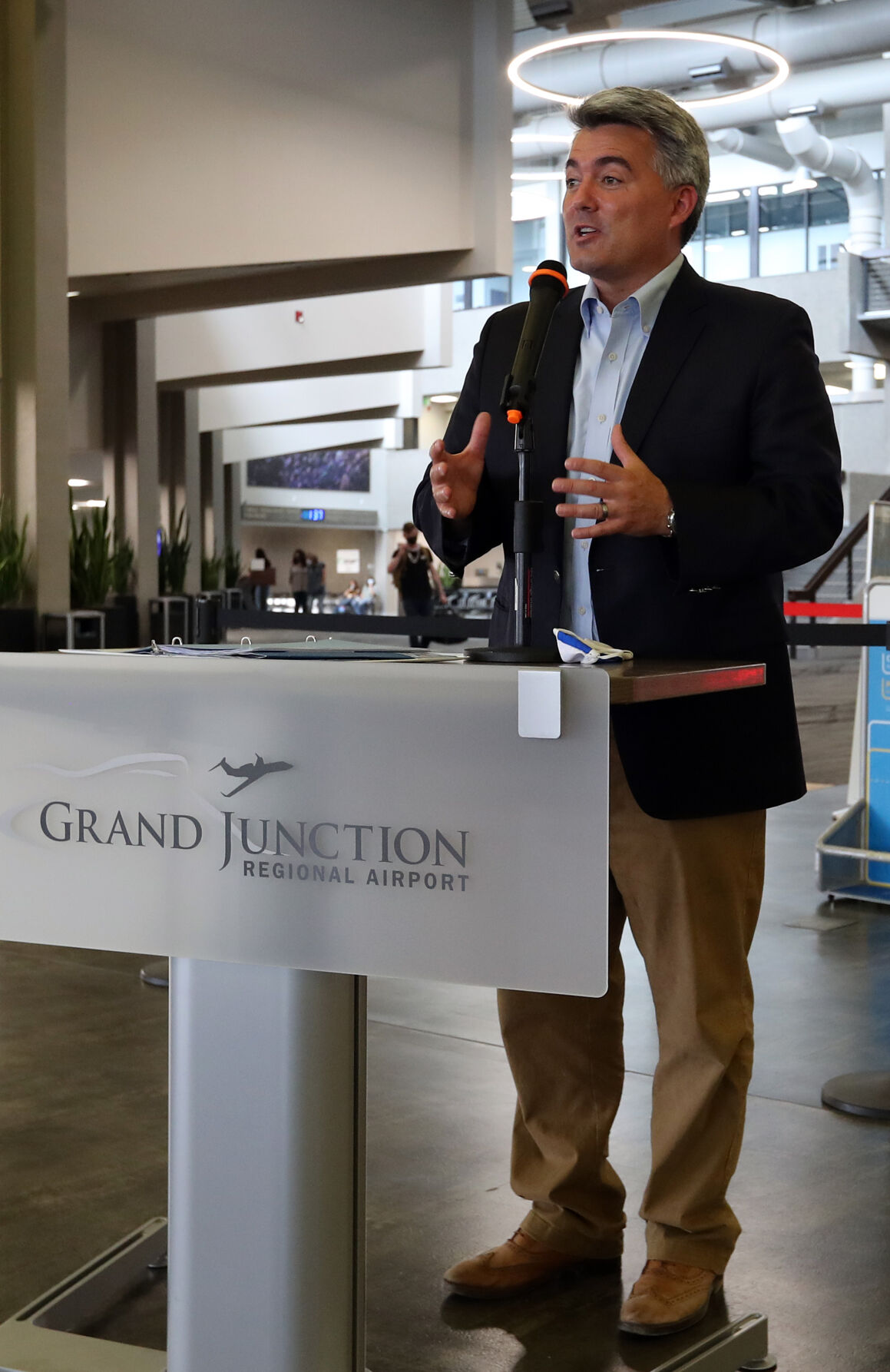 Cory Gardner announces a new airport grant Saturday afternoon in the terminal at Grand Junction Regional Airport .And that's no halo over his head.

Cory Gardner announces a new airport grant Saturday afternoon in the terminal at Grand Junction Regional Airport .And that's no halo over his head.

In the midst of the U.S. Senate’s recess and a hotly contested election season, Colorado Sen. Cory Gardner’s visit to Grand Junction on Saturday wasn’t simply his usual campaigning. It was also a celebration.

The Republican member of Congress spoke at a press conference at Grand Junction Regional Airport, assisting Airport Executive Director Angela Padalecki in announcing the Grand Junction Airport Improvement Grant, the largest federal grant in the airport’s history. The airport has been granted $12.9 million through the Federal Aviation Administration’s Airport Improvement Program (AIP). So far this year, the airport has been awarded a record $20 million in federal grants.

Because of the Coronavirus Aid, Relief, and Economic Security (CARES) stimulus bill signed into law by President Donald Trump in March in response to economic fallout from the COVID-19 coronavirus, Grand Junction taxpayers were not tasked with providing any airport funding of their own.

“Twenty million dollars, 20 for ’20 is an incredible feat, and I’m very proud of the work the Grand Junction Airport Authority continues to do to expand opportunities, services and the incredible upgrades that have taken place at the facility over the last several years,” Gardner said. “Under normal circumstances, a community is required to put forward a 10% match. Thanks to the CARES Act we passed in Congress several months ago, it’s used to meet that 10% match, so not only did the airport get to have the $12-plus million grant, but the CARES Act dollars were used to provide the 10% match, so a match of over $1.3 million to make this project possible.”

The goal of the project is to replace the west commercial ramp and add a large engine run-up pad, where planes can test their engines safely after receiving maintenance work.

After the press conference, Gardner spoke with The Daily Sentinel about the state of the GOP, the Health and Economic Recovery Omnibus Emergency Solutions (HEROES) Act, and his Senate race against Democrat John Hickenlooper.

Gardner touted the Republican Party’s accomplishments for Colorado, including the bipartisan Great American Outdoors Act that he sponsored along with Democratic Sen. Michael Bennet that Trump signed into law earlier this month.

“Over the last 6 years, we’ve moved the Bureau of Land Management headquarters to Grand Junction, we’ve returned millions of dollars in energy revenue that should have already been given back to the counties but had been held up at the federal level for over a decade, we’ve protected our water through the Colorado River Drought Contingency Plan, and, of course, the biggest land bill in the history of our country in terms of the dollars put into our public lands, the Great American Outdoors Act, was my bill that was signed into law a couple of weeks ago,” Gardner said. “I think that’s a great sign of the work we continue to do.”

The HEROES Act, an additional stimulus bill related to the fallout from COVID-19, was passed earlier this year by the House of Representatives. However, the bill remained on the Senate floor as they adjourned for recess Aug. 13 and will not return to Washington, D.C., until Sept. 8.

Gardner pinned the responsibility for the bill’s stagnation on House Speaker and Democrat Nancy Pelosi, saying that negotiations will need to continue before the Senate holds a vote.

“I certainly hope (we get something done after returning),” Gardner said. “Unfortunately, Nancy Pelosi and the House have refused to negotiate. In fact, she said that Republicans were enemies of the state. That’s embarrassing. That’s not any way to work together in a bipartisan fashion. If she’s serious about doing the right thing for this country, she’ll stop the name-calling for people across this country and start committing to real work.”

Gardner is unsure whether Trump will visit Colorado, and specifically the Western Slope, before November’s election. Trump considers Colorado a battleground state, so Gardner believes he would benefit from a campaign visit, not only to appeal to his supporters, but also to see first-hand some of the changes brought to the state under his administration.

Gardner also accused Hickenlooper of potentially wanting to end the BLM’s time in Grand Junction should he become a senator.

“I hope that the entire Colorado congressional delegation could come with the president to show him the Bureau of Land Management headquarters,” Gardner said. “I’m very worried that John Hickenlooper wants to remove the Bureau of Land Management headquarters from Grand Junction and take it back to Washington, D.C. We want to show the work we’ve done that points dollars back into western Colorado. We opened up U.S. Space Command in Colorado Springs. The fact you have the largest grant the airport has ever received... I hope they can come and talk about the good things they’re doing.”

Hickenlooper will be among the Democratic candidates for various offices not participating in the Club 20 debates that are normally held in Grand Junction for significant political races. He told The Daily Sentinel on Aug. 22 that he still had hopes for debating Gardner on the Western Slope, although he offered no specifics on how or when.

“I’m excited about this campaign and I’m excited about western Colorado,” Gardner said. “John Hickenlooper has refused to come to Grand Junction and debate. I think that’s embarrassing for him because the Western Slope matters. Even though he thinks that rural Coloradans are backwards, I think they’re very important. I’m a rural Coloradan and I’m going to fight like heck for Grand Junction every single time.”