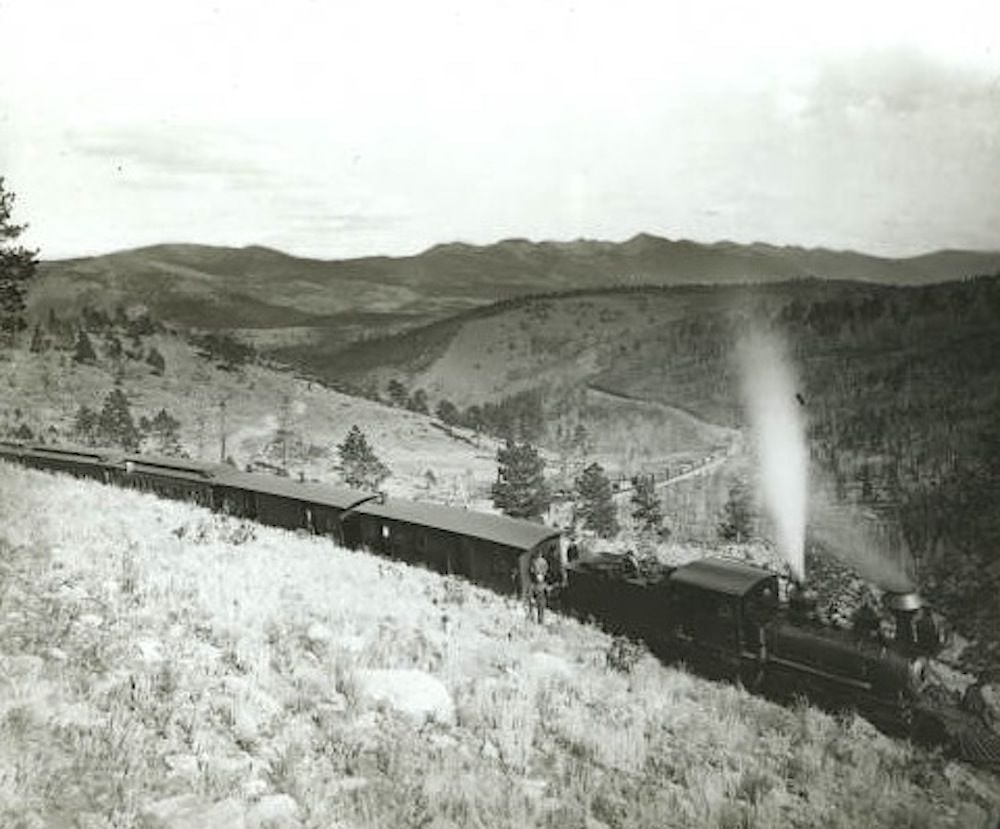 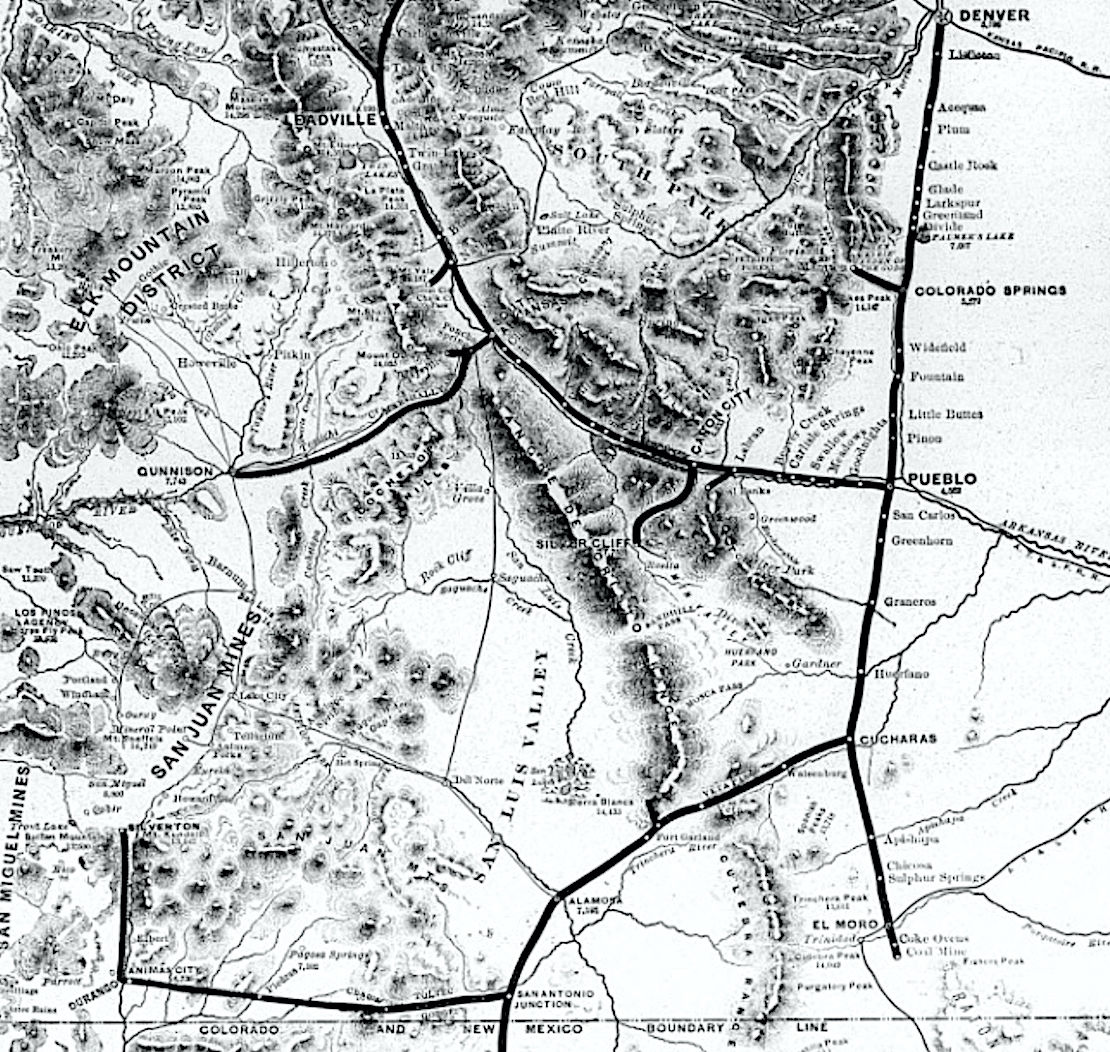 A map produced by the D&RG in 1881 shows the western line of the railway had reached Gunnison over Marshall Pass, but had not yet pushed through the Black Canyon. 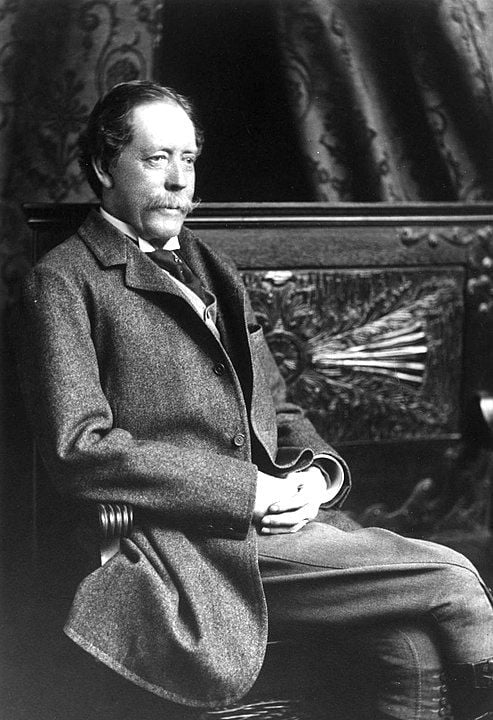 William Jackson Palmer was the founder and driving force behind the Denver & Rio Grande Railway.

A map produced by the D&RG in 1881 shows the western line of the railway had reached Gunnison over Marshall Pass, but had not yet pushed through the Black Canyon.

William Jackson Palmer was the founder and driving force behind the Denver & Rio Grande Railway.

When he founded his small railroad in 1870, Gen. William Jackson Palmer didn’t plan to make it the most renowned mountain railroad in the country. He simply wanted to connect Denver with Colorado Springs, then to El Paso, Texas, over a relatively gentle topography, and provide access into Old Mexico.

But a decade later, Palmer’s Denver & Rio Grande Railway had fought and won a legal and physical war with the Atchison, Topeka and Santa Fe Railroad for the right to build tracks through the Royal Gorge and on to the silver capital of Leadville.

Using its narrow-gauge format, the D&RG had also built a rail line over La Veta Pass to Alamosa, at the time the highest railroad route in the world.

And it was pushing its way over the Marshall Pass, the first railroad crossing of the Continental Divide.

Palmer was setting his sights on Gunnison and the entire Western Slope of Colorado, even though Ute Indians still legally occupied most of that territory.

Gen. Palmer, a Delaware Quaker who grew up in Philadelphia, began working with railroads as a teenager.

He traveled to England to study rail operations there, and wrote an influential paper on the need for American railroads to switch from wood fuel to coal.

His rail career was interrupted by the Civil War, when his ardent abolitionist views took precedence over his pacifist Quaker upbringing.

He became a cavalry officer in the Union Army and eventually was promoted to the field grade of Brevet Brigadier General.

He also won the Medal of Honor for leading his troops on a successful mission against a much larger force.

Early on, Palmer demonstrated he was a determined man, someone who didn’t give up easily.

So, when some of the hundreds of surveyors he employed told him it was impossible to construct a railroad through the Black Canyon of the Gunnison as he aimed his rail line westward, he rejected their conclusion.

Palmer sent another crew of engineers into the canyon during the frigid month of January 1881.

“The surveying was extremely dangerous and was done partially through the use of ropes and scaling ladders,” wrote historian Duane Vandenbusche.

In particularly narrow sections, “Men, horses, and wagons were lowered down the steep walls by ropes.”

One member of the surveying party was killed when the rope he was using to scale the canyon wall broke and, Vandenbusche said, “The daring engineer was dashed to death at the bottom of the cañon.”

Despite such obstacles, the surveyors finished their work by summer 1881.

And this time the report to Palmer was acceptable: A railroad could be built through the eastern end of the Black Canyon, but it would have to come out at Cimarron, then continue westward over Cerro Summit.

Construction began that summer and, Vandenbusche wrote, “For a year, over one thousand men blasted and cut a road bed fifteen miles through the gorge.”

Those 15 miles now lie under the waters of Morrow Point Reservoir.

Palmer planned to have the D&RG continue westward to Salt Lake City. He purchased small, narrow-gauge railroads in Utah, and created the Denver & Rio Grande Western Railway to work from Salt Lake City south and east so the two lines could eventually connect and rail travelers could go all the way to the Pacific without having to travel north into Wyoming.

Palmer said the line to Utah would provide Colorado mining communities access to the agricultural products of Utah while allowing Colorado mining products and machinery to be shipped to Salt Lake and beyond.

He pushed westward even though most Ute Indians weren’t removed from the Western Slope until September 1881, when the Ute Reservation was officially opened to settlement.

Track was completed over 10,845-foot Marshall Pass — between Salida and Sargents, south of today’s Monarch Pass –— in the summer of 1881. The D&RG reached Gunnison City (now Gunnison) in early August.

By October, the Gunnison Daily News-Democrat reported that “The Denver and Rio Grande Railroad is anxious to reach Salt Lake City and is concentrating all of its forces on the Main Line in order” to get there quickly.

But there were obstacles to completing the work quickly:

A survey party working beyond the Black Canyon in early 1881 was ordered out of the Ute Reservation by the government’s Indian agent in the Uncompahgre Valley.

Later that year, another survey party was threatened by Utes and had to retreat from its work.

In August of 1881, five workers were killed in the Black Canyon when explosives detonated prematurely.

Some track layers wrote letters to newspapers, complaining of their dangerous work conditions. There were rumors of strikes.

Work crews had trouble getting enough steel rails over the mountains to keep the track moving forward, especially since the D&RG was also expanding into the San Juans and into New Mexico simultaneously.

Eventually, Palmer and his partners created the Colorado Coal and Iron Co. in Pueblo to manufacture their own rails.

And the company’s financial situation was always teetering on the edge of disaster.

Even so, by May of 1882, the railroad was nearly complete through the Black Canyon. Then on May 23, landslides on Marshall Pass closed the railroad for days and delayed the work again.

It wasn’t until Aug. 13, 1882, that the first D&RG train chugged through the eastern section of the Black Canyon and came out at Cimarron.

“The cost of building the fifteen mile road” through the Black Canyon to Cimarron “was prodigious” at $165,000 a mile,” Vandenbusche reported.

Cimarron was still the western end of the line for the D&RG in mid-August 1882.

But in early September, the rail line reached Montrose. One Colorado newspaper reported that the company was “sending all men possible to Montrose,” as the tracks were pushed north toward Grand Junction.

Meanwhile, the work in Utah was also proceeding steadily.

However, on Oct. 14, a Salt Lake newspaper reported there was still a 200-mile gap between the Utah and Colorado ends of the railroad.

The hoped-for connection date was pushed back from Jan. 1 to mid-February.

But none of this work would compare with the Black Canyon portion of the line, which one engineer later described as the “suicide run,” because of the frequent rockslides and avalanches.

British author Rudyard Kipling, who rode the D&RG through the Black Canyon in 1889, describe the ride like this:

“Then the driver put on all the steam and we would go round the curve on one wheel chiefly, the Gunnison River gnashing its teeth below. The cars overhung the edge of the water, and if a single one of the rails had chosen to spread, nothing in the wide world could have saved us from drowning.”

Next: The D&RG reaches Grand Junction and finally connects with the Utah branch.