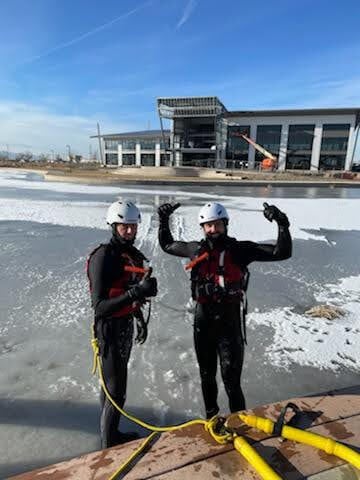 Grand Junction Fire Department firefighters train for ice rescues at Butterfly Pond at Las Colonias Park on Monday. Usually when GJFD firefighters are called to an ice rescue, it’s because of pets falling through the ice. 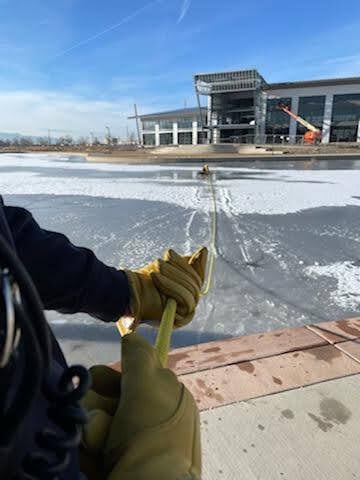 Grand Junction Fire Department firefighters train for ice rescues at Butterfly Pond at Las Colonias Park on Monday. Usually when GJFD firefighters are called to an ice rescue, it’s because of pets falling through the ice.

Grand Junction Fire Department firefighters were out at the Butterfly Pond at Las Colonias Park on Monday training for river rescues in frozen water.

During the winter months, icy conditions on nearby ponds, lakes and rivers can be very dangerous for children and pet owners in the Grand Valley.

GJFD spokesperson Ellis Thompson-Ellis said last year firefighters weren’t called to any ice rescues during the winter but the year before they went on “close to a dozen.”

“It really depends on the winter,” she said. “Last year, we didn’t have much ice. We had a pretty warm and dry winter and didn’t have consistent ice on our ponds on in our parks”

Typically, the ice rescues GJFD firefighters are called to involve a pet falling through the ice. GJPD advises pet owners to immediately call 911 and to never try to rescue the pets themselves. They put themselves, their dog and anyone who helps at greater risk by attempting it themselves.

Although Thompson hadn’t heard of firefighters being called to a rescue so far this year, she said it is still early. With lakes and streams around the area freezing over the past few weeks as colder weather moved in, Thompson said the cold front provided firefighters the perfect opportunity to get a little training in.

“It is really just a matter of temperature. This year it’s been cold enough that we have a thick layer of ice on side river channels,” she said.

Whenever there is good ice cover reported, as it is right now, GJFD fire stations will rotate doing ice rescue training. Officers will go out on the ice and practice what saving someone will be like in real conditions.

“A lot of our new firefighters this year did the academy over the summer and that’s not the same as actually getting in the water,” Thompson explained. “It’s important to give them real world training on that skill.”

Like many of the training exercises GJFD firefighters embark on, ice rescues can be extremely dangerous. According to the National Weather Service, cold water drains body heat up to 25 times faster than cold air and survival time is greatly diminished for someone immersed in water below 70 degrees.

Immersion in cold water is immediately life-threatening for anyone not wearing thermal protection and even strong swimmers reportedly lose muscle control in about 10 minutes in cold water.

Roughly 20% of those who fall in cold water die in the first minute of immersion due to cold water shock, the NWS reports, and within an hour hypothermia sets in.

“Our crews have a dangerous job,” Thompson said.

She said that whenever the fire department does training exercises like this, they go through safety precautions and protocols and leave plenty of time for preparation and coaching.

“Ultimately that is what we are doing is teaching safety in dangerous situations,” she said.

Firefighters also know the dangers before they set out.

“It’s very similar to how we practice rope rescue. The first step is off the training tower at Station 1 and we go through incremental steps to build skills,” Thompson added.