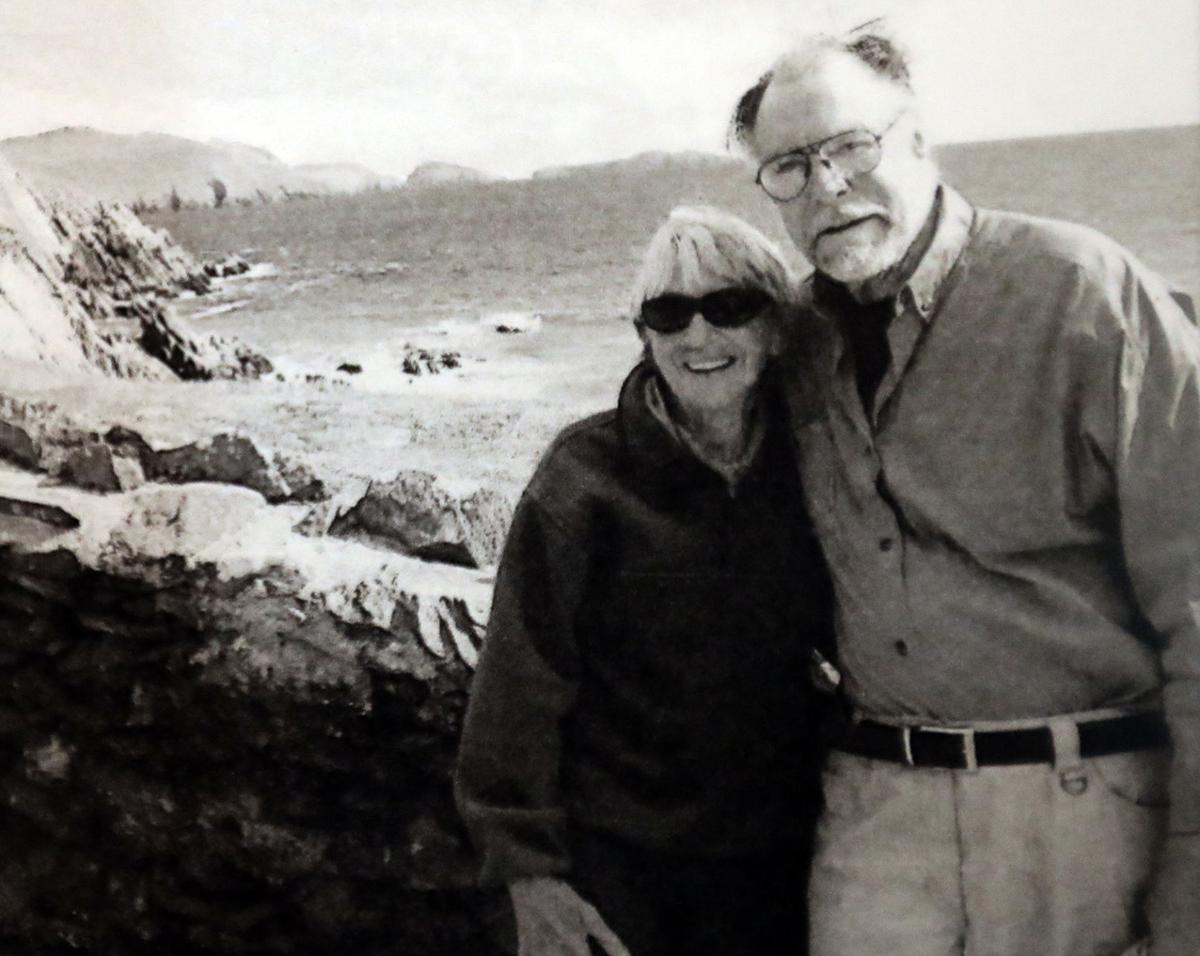 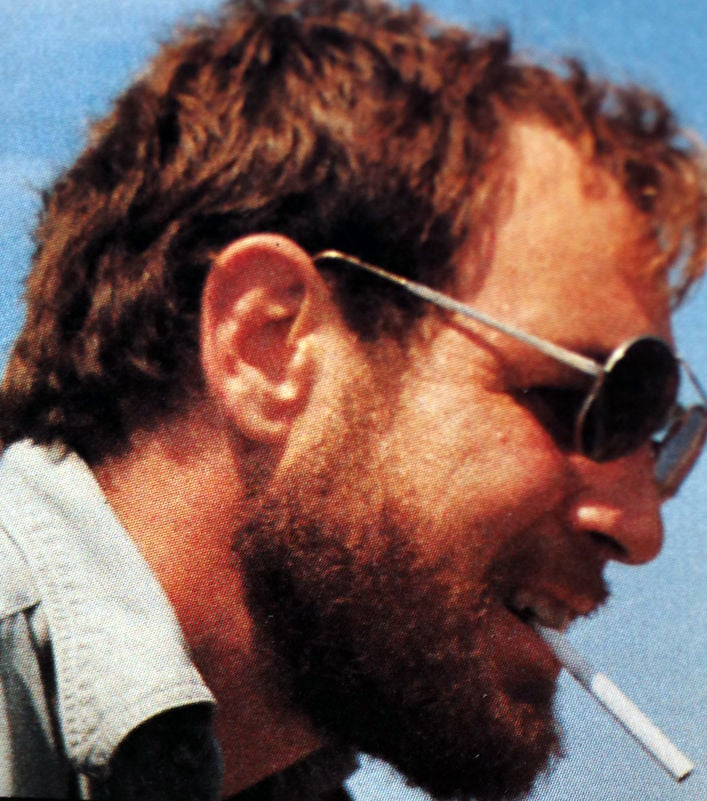 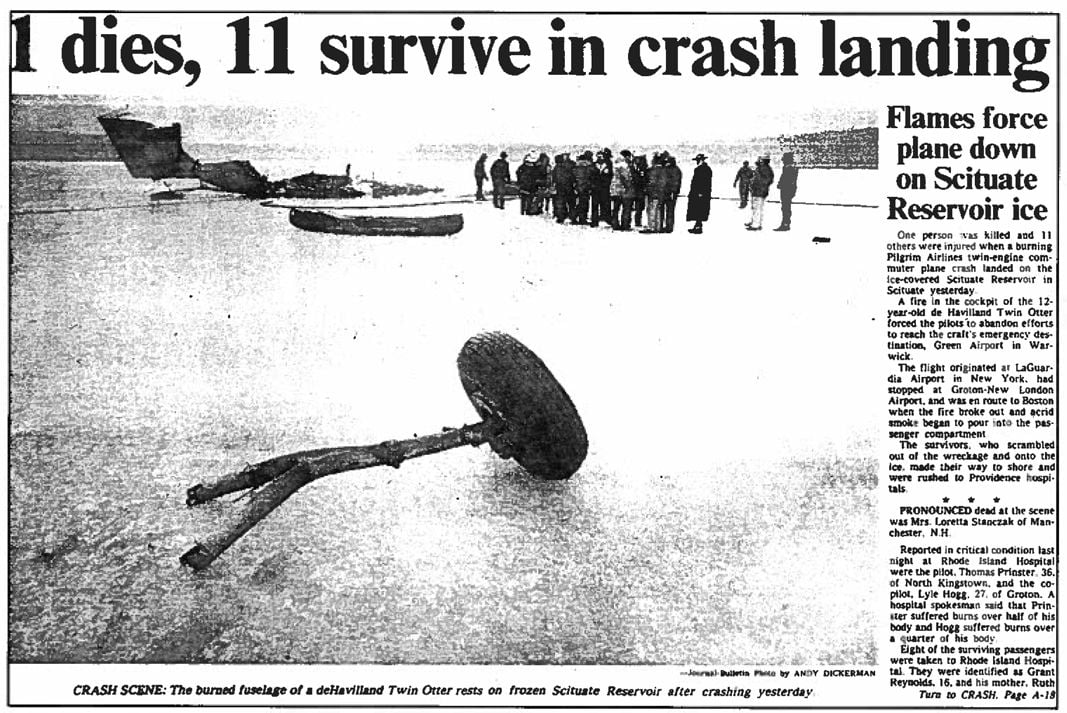 News account from a Rhode Island newspaper, Providence Journal, of the crash landing. 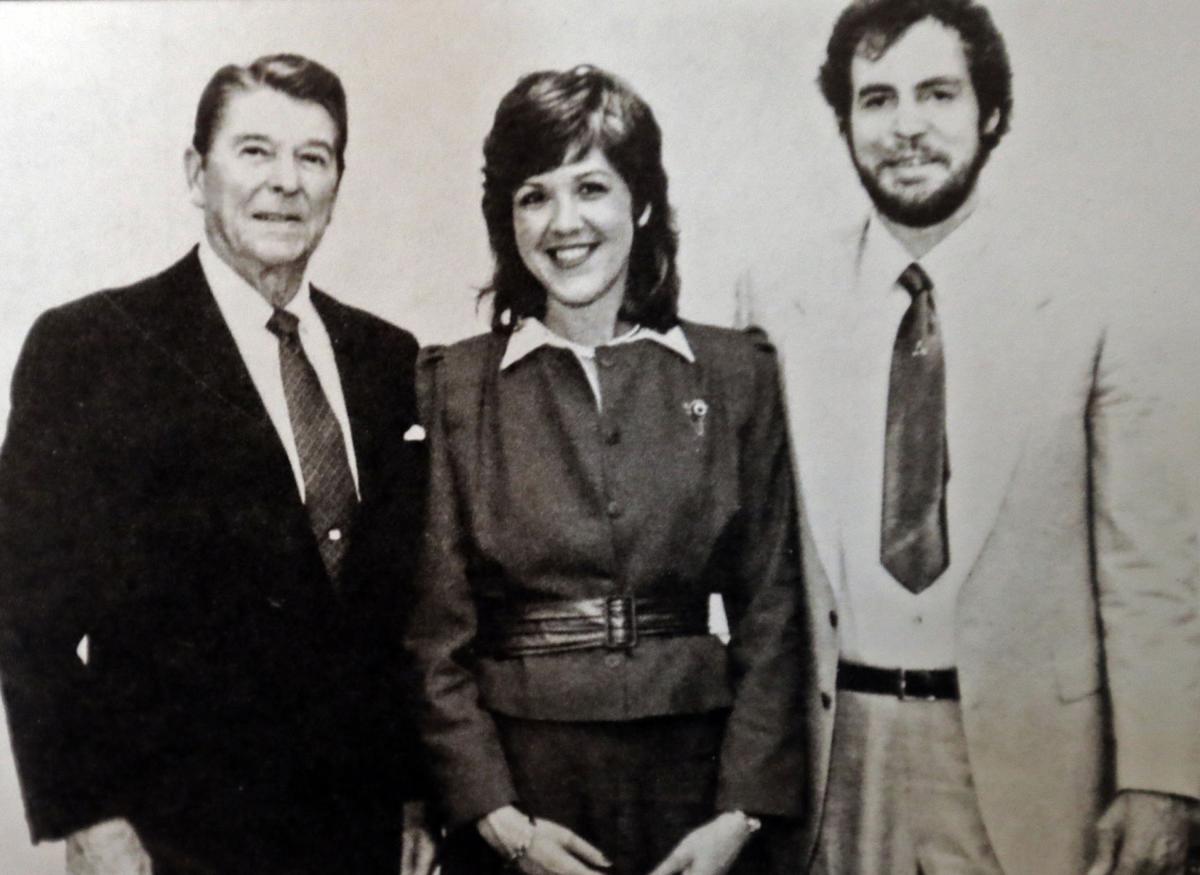 News account from a Rhode Island newspaper, Providence Journal, of the crash landing.

On Feb. 21, 1982, a commuter plane piloted by 36-year-old Thomas Prinster took off from New London, Connecticut, on a cold, crisp New England afternoon, headed for Boston with 10 passengers aboard.

Pilgrim Airlines Flight 458 would only make it as far as frozen Scituate Reservoir in western Rhode Island, though — where Prinster was able to guide and crash-land the plane crippled by fire …

While being roasted alive by the flames.

The fire broke out just below the cockpit, and soon the small space where Prinster and the less-experienced First Officer Lyle Hogg were seated was filled with black smoke. Flames consumed the controls of the plane, making them white hot, but Prinster would not let go of the yoke.

Interviewed later, he cast that decision as quite simple.

“If I left (the controls) we would crash and die. It wasn’t such a hard decision after all,” Prinster coolly explained.

Prinster — who grew up in Grand Junction, as part of the legendary family that opened City Market two generations before him, and learned to fly at Monarch Aviation, now West Star Aviation — died at the age of 73 last year, of complications from the crash 36 years earlier, according to his only brother, Tony Prinster.

Last month, Tom Prinster was inducted posthumously into the Rhode Island Aviation Hall of Fame, along with Hogg, for their incredible life-saving actions that February day. Of the 12 people on board, 11 survived, with one passenger dying of smoke inhalation.

An investigation determined that an antiquated deicing system was to blame for the fire. William Garvey, an editor at Professional Pilot magazine, thoroughly researched the incident and eloquently brought details of the accident — and the crew’s astonishing resolve — to light.

“The flames, furious and intensely hot, had eaten through the flight deck. Prinster and Hogg were being roasted in their seats. Their uniforms, part synthetic, were melting to their bodies. The heat and the flames were charring their arms, legs and torsos. Their hair was singed to dust. Their fingers were frying on the yoke. Even their ears were burned raw by the insatiable, excruciating flames,” Garvey wrote.

“They were being torched like meat on a spit. … But they both remained at their stations, flying their disintegrating craft through its final, screaming descent.”

Prinster, on fire, never let go of the plane’s controls.

After the impromptu crash landing on the frozen reservoir — at some point Prinster had his head out the window, braving a slipstream of frozen air, to find a place to land — both Prinster and Hogg “were burned horribly and as they made their way toward the shore, a quarter-mile away, lumps of charred flesh fell from their arms and legs,” Garvey wrote. “Their hair was cinder. Smoke or body steam was rising from their open wounds and clothing. Burnt, blackened gashes split their legs, exposing the bone beneath.”

After he was sure he could do no more for his passengers, Prinster collapsed.

Seventy percent of Prinster’s body was burned, much of that third-degree burns. He spent the next six months in the burn center at Massachusetts General Hospital. He was one of the first recipients of artificial skin. His lungs were scarred for the rest of his life, according to Tony Prinster.

After their recovery, the accolades started: Prinster and Hogg were invited to the White House to meet President Reagan and receive the Department of Transportation Heroism Award; the Rhode Island governor awarded Prinster the state’s Life Saving Medal; the park near the crash site was named in the duo’s honor; they also received the 1982 Order of Daedalians Civilian Air Safety Award, a Veterans of Foreign Wars Citation for Heroism, and the “Well Done” Award from the Charles Lindbergh Chapter of the Air Force Association, among other honors they received.

But the crash changed his brother forever, Tony Prinster said.

Tom — a “great brother,” he said — was just a teenager when he got his pilot’s license, and used it to scout climbing routes in the peaks around Grand Junction. The 6-foot 5-inch football player graduated from Gonzaga University with a degree in literature, then rode more than a thousand miles on his ten-speed from the school in Spokane, Washington, back to Grand Junction.

He joined the Navy during the Vietnam War and flew submarine patrols from the USS Enterprise, before returning home to pursue his commercial pilot career.

He flew as a commercial pilot again after the crash, but it was temporary, and likely just to know that he could do it again.

Instead, he pursued a “second life,” as Tony describes. Inspired by the Jungian psychology of dreams he got a degree in psychotherapy, and became a psychoanalyst and counselor. He also took up novel writing later in life.

In a profile, Tony described his kid brother as “fearless.”

Also tenacious. “Once he sets his mind to something, the mountain will move, but he won’t.”