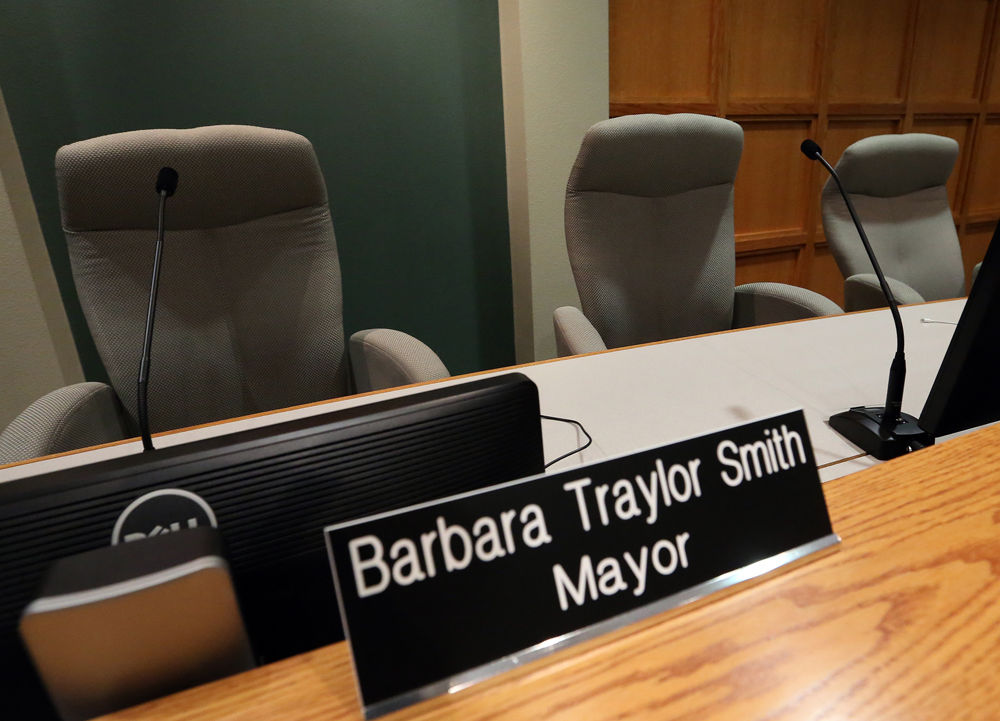 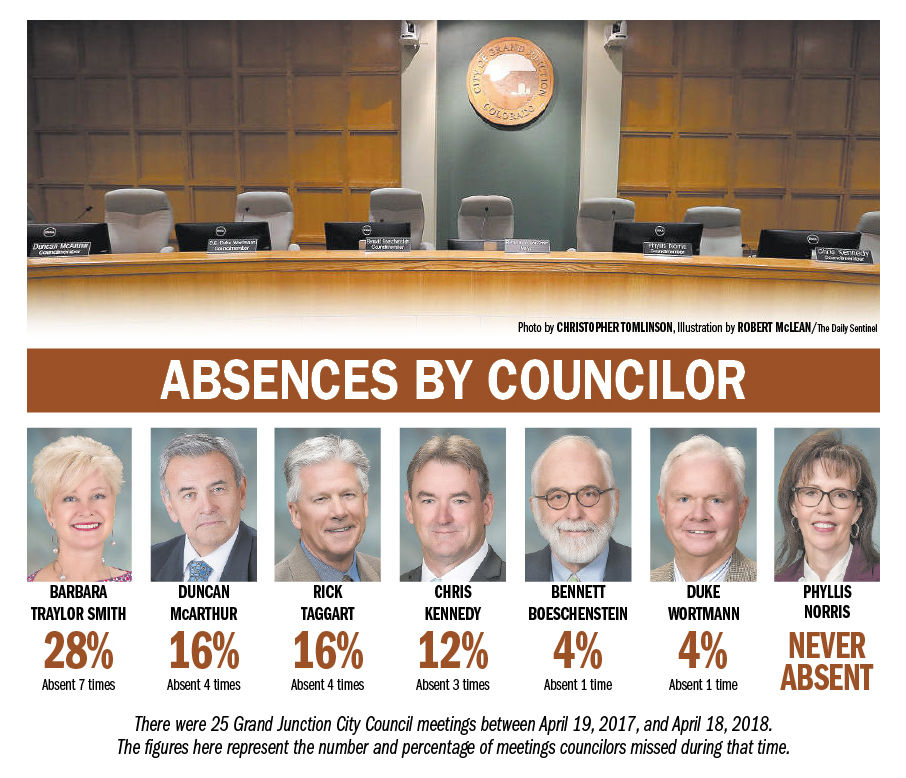 Smith, the president of Retirement Outfitters, LLC, and an independent wealth adviser with Wealth Source Partners, said in a recent interview she won't make promises to attend more of the twice-monthly, nighttime public meetings. She'll weigh her future attendance on a case-by-case basis considering her work commitments because she often travels for work or works late two to three nights a week.

"I've always got it on my calendar," Smith said of council meetings. "If I have something, I'm not going to reschedule my clients."

The Daily Sentinel reviewed minutes for the 25 City Council meetings held between April 19, 2017, and April 18, 2018, and found Smith was absent from seven of them, a 28 percent absence rate. The other six city councilors, by comparison, missed a combined 13 meetings during that same time. No other councilor missed more than four meetings. One of them attended every meeting.

While none of the absences comes close to running afoul of Grand Junction's city charter, Smith's disproportionately high absence rate — compared to other councilors — raises some questions.

Should councilors who are elected to represent their constituents and vote on a host of issues be expected to attend every formal meeting? If so, does the council risk being overrepresented by a small segment of the population — namely, retirees or the more well-to-do?

Smith's fellow council members said while they believe attendance at public meetings is an important function of being an elected leader, it's also important that a councilor's duties aren't so taxing that the position becomes out of reach for working folks.

The mayor isn't elected separately from the rest of the council but is, in fact, an appointed position that almost always rotates among the council annually or every other year. But the mayor isn't simply a figurehead with a fancy title. The mayor runs meetings and can cast the deciding vote on an issue. The mayor typically attends a number of additional engagements such as ribbon cuttings, grand openings and visits from political leaders, and often serves as the voice and face of the city. The mayor's $750 monthly stipend is $250 more than fellow councilors' stipends.

As mayor, Smith said she'll attend the events she can and offer up engagements to other councilors who might be interested in representing the city.

"If someone requests the Grand Junction City Council presence... if it's something that one council member is passionate about, let them be involved," Smith said about the prospect of divvying up mayoral engagements. "Then they know the city represents them. There's no reason the mayor has to do it."

Smith has served on the board for the past 4 1/2 years and was appointed by other councilors earlier this month to serve as mayor, a one-year term.

Smith, as well as the other councilors interviewed, said they want the city's elected board to be a diverse group of seven individuals, not solely retirees or folks who are wealthy enough that they don't have to work.

The last year was a particularly busy time for her work, Smith said, as business doubled. She has more help to handle the workload this year. Smith said she's likely the youngest person on Grand Junction's board, and one of a few who hold down a full-time day job.

"We have to be careful not to make this such a big job that people with a job can't do this," she said. "If I get opportunities outside of town … I get to make a choice. This is one of my challenges."

Smith is the kind of person who likes to be busy, she said, "and do as much as I can with my talents."

Before applying for a council appointment in 2013, Smith asked her daughter — a high school senior at the time — whether she should run for the position. If her daughter would have protested, Smith said she wouldn't have thrown her hat in the ring.

Before considering a run, Smith attended a month's worth of City Council meetings to ensure she could keep up with the pace.

She said she doesn't watch television, and judiciously chooses which movies to watch in a theater. Her daily work calendar is divided into 15-minute increments.

At her first meeting as mayor earlier this month, Smith kept speakers moving along, demanded the audience show respect when they started to grumble while listening to an opposing viewpoint and generally kept the proceeding efficient. Being efficient is a term she likes to use to describe her leadership style.

Smith said the pace of government is slow, so by the time an issue comes to a vote, it's been thoroughly vetted and either passes or fails by a majority vote of councilors without a lot of contention. She said being present to vote on matters may not always be necessary.

"Ninety percent of the time we are pretty much in agreement," Smith said of the council.

Bennett Boeschenstein, the current mayor pro-tem who serves as second-in-command to run meetings in the mayor's absence, is retired and usually attends all council meetings, unless he's traveling. He's missed meetings in the past while on vacation, and knows he'll be absent later this year because he'll be traveling.

Boeschenstein estimates he invests about 30 hours a week into the job — "way too many hours," he joked. In addition to the twice-monthly public meetings and the two workshops, he attends other assigned meetings as the council representative. Sometimes Boeschenstein attends other, extra meetings just to stay up-to-date with other boards.

He believes councilors should be at meetings to vote, but he also believes the workload shouldn't be so cumbersome that younger people can't run for office.

"We don't just want retirees on the board. We need young people," he said.

Taggart, who served as mayor before Smith, estimates his duties as the city's figurehead increased 40 to 50 percent compared to when he was a councilor. Taggart teaches nearly full-time at Colorado Mesa University.

"I made a decision I was going to go to as many things as I could fit in," he said. "I don't know that a mayor absolutely has to do that."

Taggart, like other councilors, said he would be happy to take a role in representing the city at certain events. However, he believes the mayor should be present at events they're specifically asked to attend.

Chris Kennedy said councilors' investment on the board's duties can vary, depending on a person's level of commitment.

"You can't do that if you're not there," Kennedy said. "If you're accepting the responsibility of council you have a duty to show unless there's an extenuating reason. If you're not making every effort to do that, it's a disservice to your constituents."

Being named mayor was a learning experience for acquaintances and clients, some of whom thought it meant Smith is now "running the city," she said. Smith said she sent a letter to clients to dispel that myth and offer some education.

Grand Junction runs on a weak mayor form of government, with the mayor running alongside councilors. The city manager is in charge of the daily operations of the city.

"People don't know we don't have a strong mayor," Smith said. "They don't understand our structure of government. That's been a great opportunity to tell the story."

While Smith maintains a busy business life, the council has been no stranger to people balancing work and home with council duties.

Former Grand Junction Mayor Bruce Hill kept a punishing schedule during the two terms he served from 2003 to 2011.

His wife's and his youngest child was born during Hill's second term on the board. Hill owns Superior Alarm, and was able to set his own schedule and keep himself free for meetings. He spent a year attending public meetings and workshops in advance of running for office to see if he could handle the commitment.

In some ways, he said, having a young child meant it was easier to get away to meetings, something he couldn't do with an older child and the abundance of after-school sports and activities to attend.

Hill kept a rule that he always made it home for dinner at 5 p.m. He agreed a councilor's meeting schedule can be taxing, and not being able to hit every ancillary meeting is "not the end of the world."

But Hill thinks attending the council's regular meetings is the crux of being a councilor.

"Philosophically, you're elected to vote," he said. "If you're at a workshop where you're learning, that's all fine and dandy and good. If you can't vote, what's the point?"

All photos taken during the JUCO tournament are available for reprint at GJSentinel.com.

Here's what other councilors had to say about Barbara Traylor Smith's absences from meetings:

"I think she's missed more than her fair share of meetings but that doesn't mean her reasons for missing aren't valid. When we are elected for office one of our first obligations is to show up."

"If folks reached out and asked for the mayor, I feel very strongly the mayor should be there. Can you do it all the time? The answer is no."

"It is important to be there and important to listen to the public testimony. If you're not there you shouldn't really make a decision. I don't know how the rest of the council feels, but I'm not worried about it."

"In a perfect world you'd want everybody there at every meeting to discuss everything. It's not reality."

"It's more important that you're engaged on the current agenda. I can't be critical of somebody who's got a job."