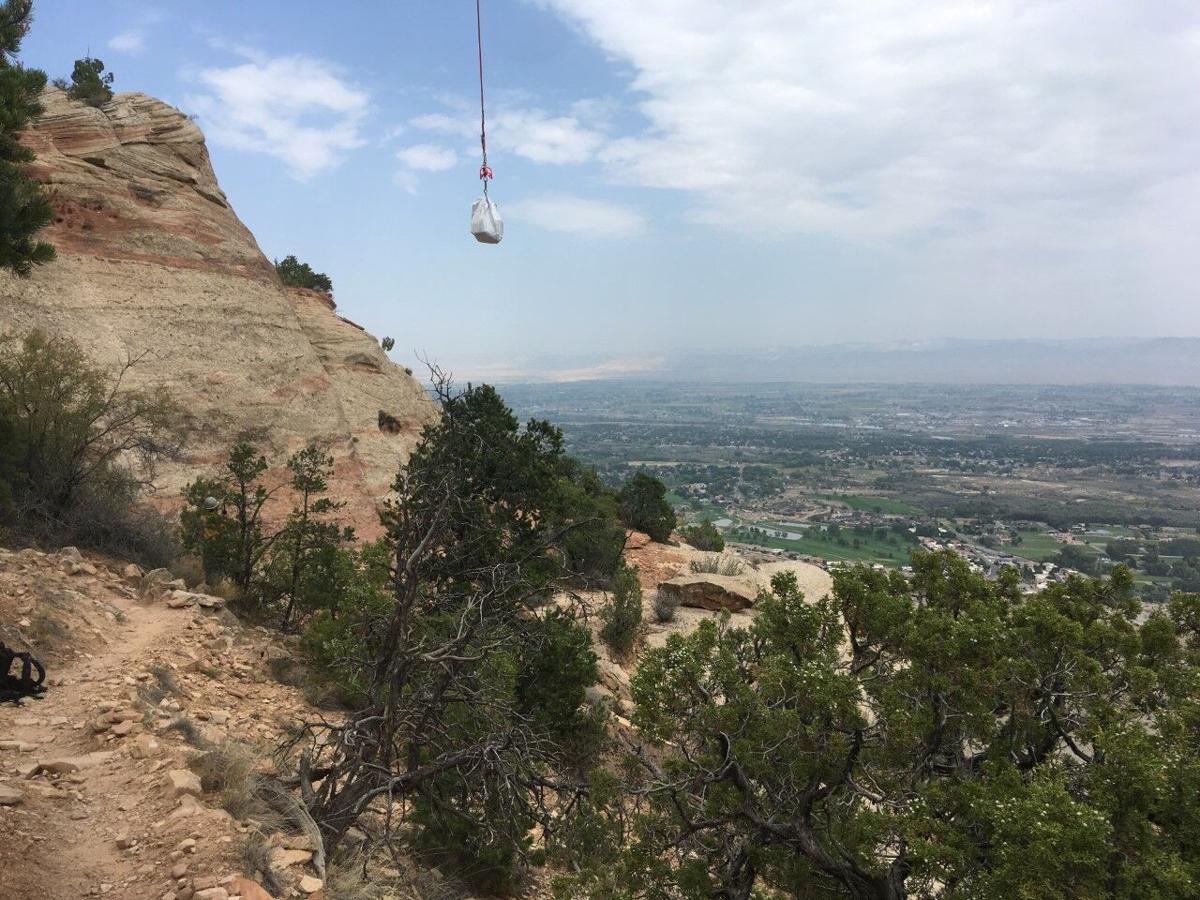 A helicopter delivers a load of rocks for use on the Liberty Cap Trail, where workers had to use ropes and harnesses in steep, exposed portions. 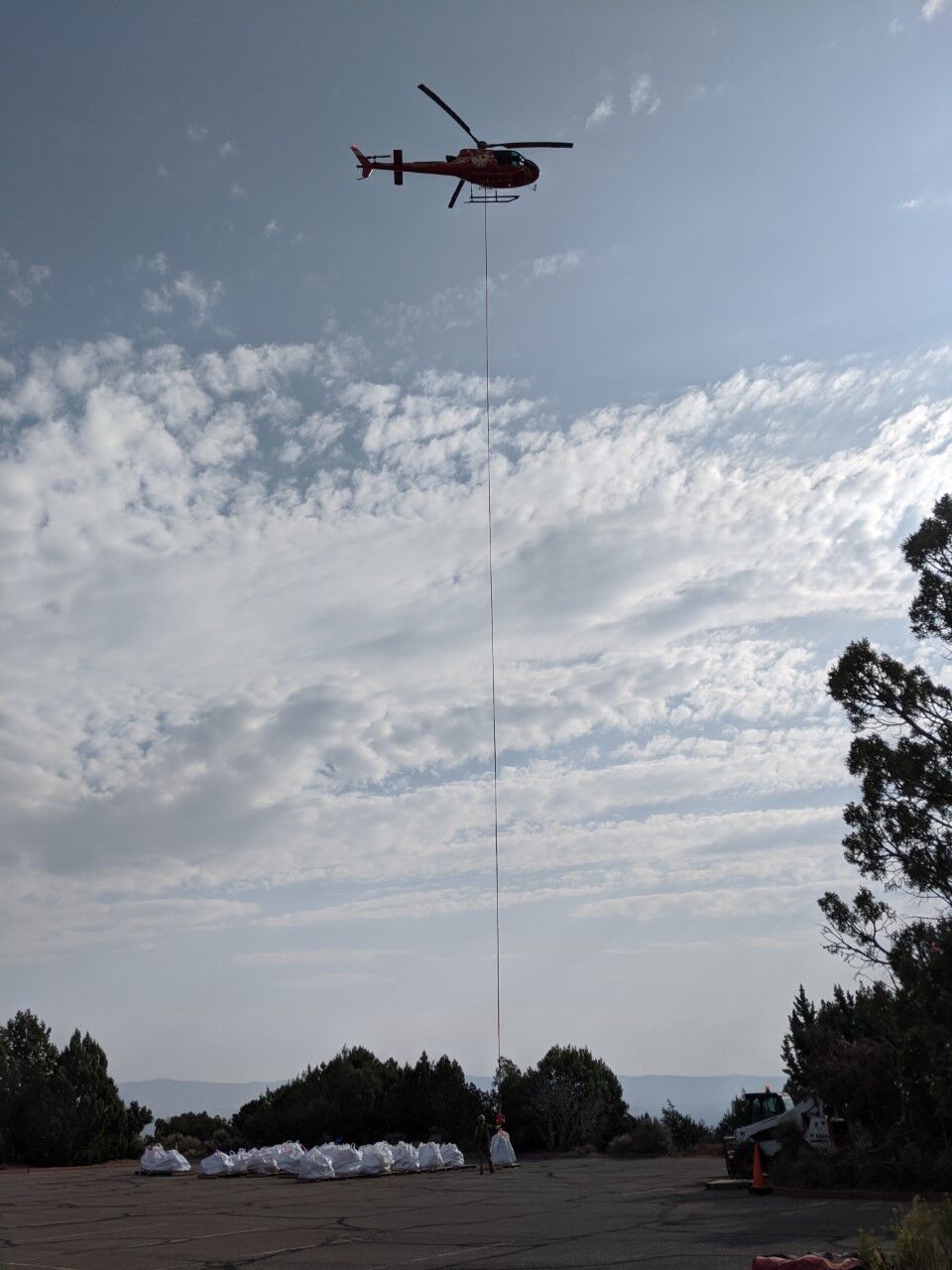 A helicopter picks up a load of rocks from the Saddlehorn Picnic Area parking lot for delivery to the Liberty Cap Trail. 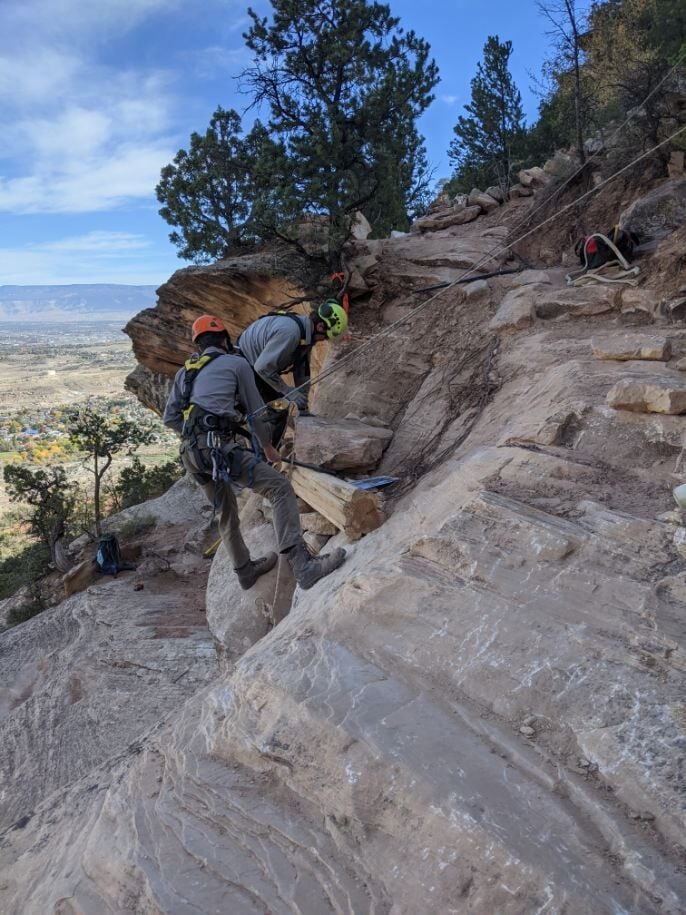 Roped up for safety on a steep slope, trail crew employees Dalton Moore, left, and Ben Dunphy make repairs to a historic retaining wall that may originally have been built by John Otto.

A helicopter delivers a load of rocks for use on the Liberty Cap Trail, where workers had to use ropes and harnesses in steep, exposed portions.

A helicopter picks up a load of rocks from the Saddlehorn Picnic Area parking lot for delivery to the Liberty Cap Trail.

Roped up for safety on a steep slope, trail crew employees Dalton Moore, left, and Ben Dunphy make repairs to a historic retaining wall that may originally have been built by John Otto.

With the help of ropes and harnesses, as well as helicopters, a historic Colorado National Monument trail is undergoing rehabilitation to help it better handle the considerable use it sees today.

A five-person crew of mostly seasonal National Park Service employees this year has been working to shore up the Liberty Cap Trail.

The work “is covering a fairly small length of trail but the trail that we’re working on is very steep in nature and requires a lot of stabilization,” said Conrad Clements, trails work leader at Colorado National Monument.

He said the trail was probably built around 1911 by John Otto. Otto built multiple trails that boosted accessibility in Colorado National Monument, and his promotional efforts contributed to its designation as a national monument by President Taft in 1911.

Clements said Otto put up a lot of retaining stone and log retaining walls on the rugged trail. Otto used mules a lot and the trail used to be open to them, but horses or mules aren’t allowed on it these days because it wouldn’t be safe due to its steepness, Clements said.

Clements said a lot of the historic retaining structures weren’t built to very high construction standards and are falling apart, “so we’re doing a lot of repair work on those structures.”

Other work is focusing on things such as repairing drainage features, and addressing stretches of trail that have “trenched out.” The crew is stabilizing those stretches by adding steps across them that hold soil in place to prevent more erosion, and adding new tread material, Clements said.

He said that in their work on historic trail structures, the trail crew is trying to match the character of what Otto installed.

While volunteers help on some trail projects in the monument, that wasn’t the case for the Liberty Cap project, at least partly because of its technical nature. Workers had to use ropes and harnesses as fall protection on steep, exposed portions.

Twice during the project — in September and earlier this month — the crew made use of helicopters. That allowed for the delivery of rock for the project due to the need for more than could be gathered from the trail area without impacting resources, Clements said.

“We needed a big enough quantity of stone and soil to execute the trail project that we didn’t want to gather it out in the field because that could potentially change the landscape,” Clements said.

While helicopter work is expensive, Clements said the trail crew was fortunate in September to enlist for a day the services of a helicopter crew out of Grand Canyon National Park after it finished responding to the Grizzly Creek Fire in Glenwood Canyon.

Clements said that reduced the cost of the trail project’s air operations.

He said he doesn’t know what the trail work is costing, but that it is being paid for through national monument entrance and campground fee revenues, most of which are used in the monument for improvements.

“Maybe that’s a little more motivation for people to support our park,” he said.

The public already shows a lot of motivation to use the Liberty Cap Trail, and that use and natural erosion from forces such as water flow have contributed to its wear and tear. Clements said the trail is easily within the top five in the monument in terms of use, in part because of fitness enthusiasts who seek it out for workouts because of its steepness.

Although a section of the trail has been closed on weekdays during the project, the National Park Service has kept it open to users on weekends, when the trail traditionally has seen the most use. The weekday closures are scheduled to continue through Dec. 4.

Clements said he thinks most people have been open-minded about the trail work and happy to see it being done.

“We’re trying to minimize impacts to visitors. We recognized that, this being a really popular trail, we want to keep it open as much as possible,” he said.

Clements said crews do general maintenance on all monument trails each year, from clearing overgrown vegetation to cleaning out drainage structures that fill with sediment or debris. But each year it also typically takes on a couple of bigger trail projects during the field season.

Next year the Park Service plans to undertake such projects on the Coke Ovens Trail and a part of the Monument Canyon Trail that’s prone to a lot of the same problems the Liberty Cap Trail has, Clements said.