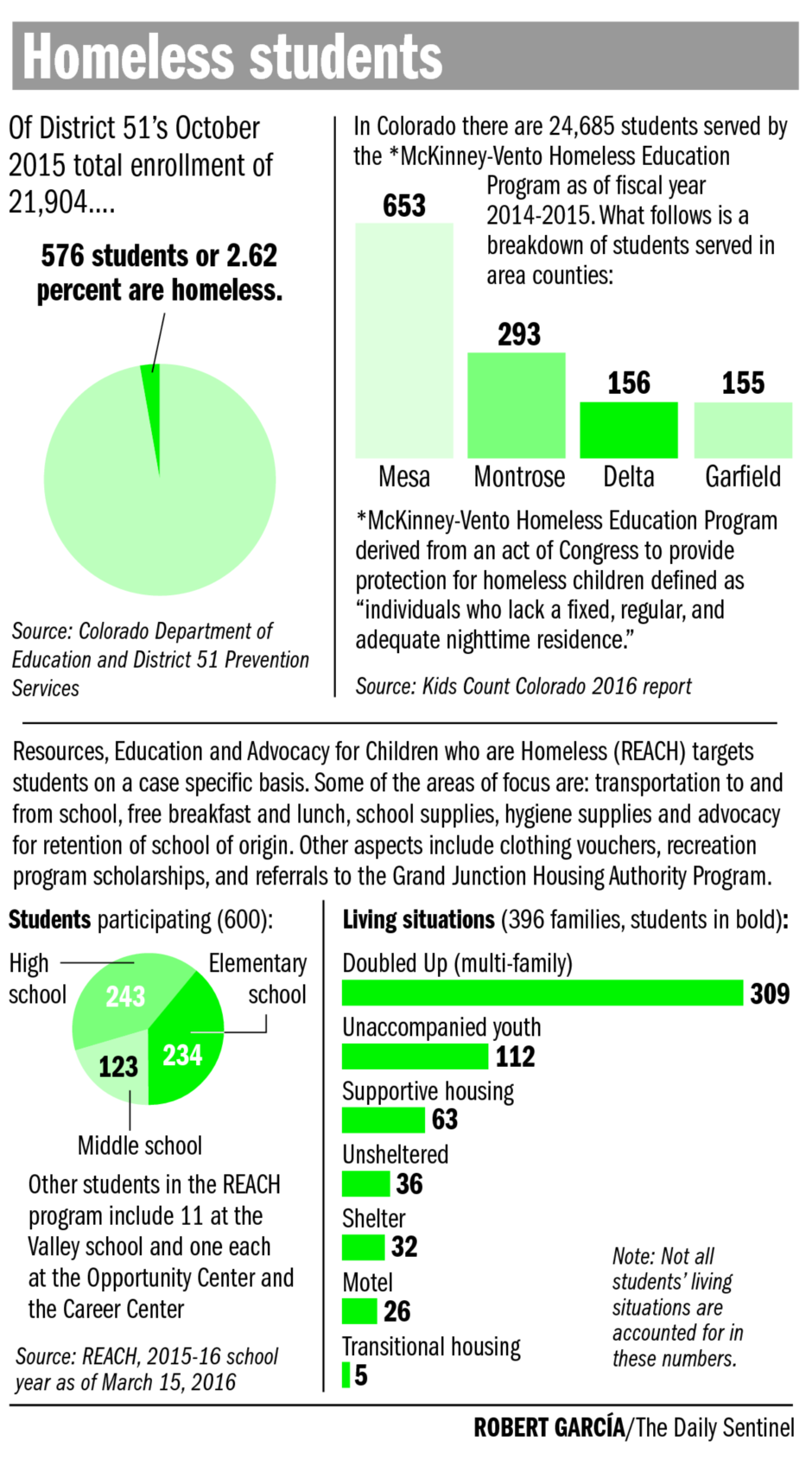 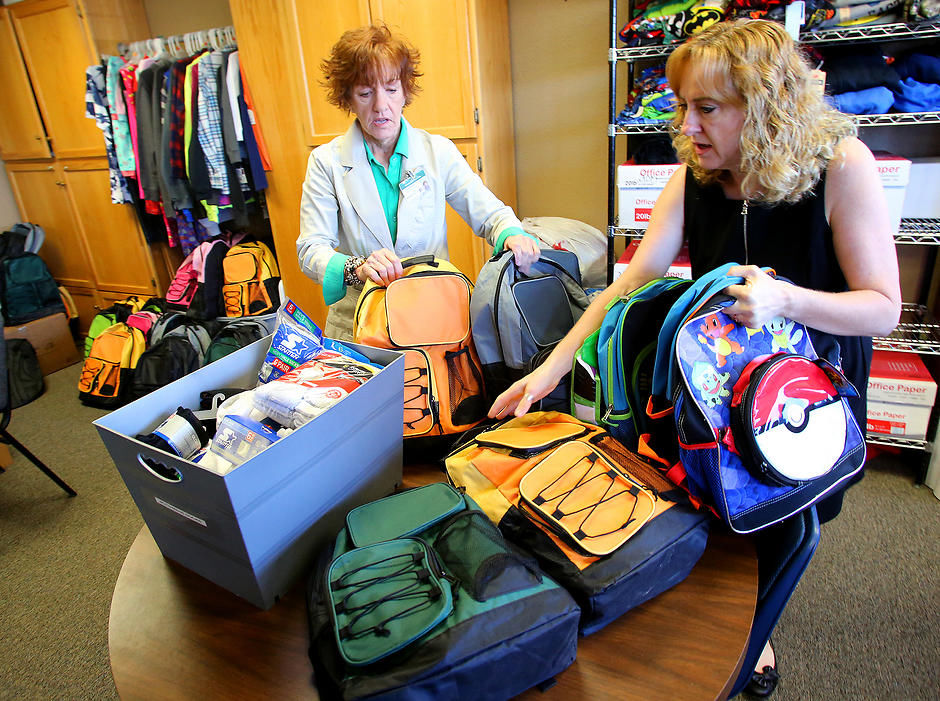 School District 51 REACH Advocates Belinda Howery, left, and Michelle Harmon sort through the backpacks for students in the Resources, Education, and Advocacy for Children who are Homeless (REACH) program at the Basil T. Knight Center, 596 N. Westgate Drive in Grand Junction.

School District 51 REACH Advocates Belinda Howery, left, and Michelle Harmon sort through the backpacks for students in the Resources, Education, and Advocacy for Children who are Homeless (REACH) program at the Basil T. Knight Center, 596 N. Westgate Drive in Grand Junction.

RELATED STORIES: A roof over their heads Life on the road takes a toll on transients

When School District 51 student advocate Belinda Howery talks about working with homeless students every day, she starts with backpacks.

Rows and rows of backpacks filled with school supplies, packs of new underwear and socks line a wall in the drop-in center. Watching a child unpack a backpack is like watching a child on Christmas, Howery said. They pick up every item and handle it with awe and care. Sometimes she must take a step back because she gets choked up watching children treat necessities like treasures.

"It's overwhelming to us that there's such a need for the basics of attending school. To have a clean pair of underwear and socks, that brightens a 7-year-old's day," she said.

There are currently 600 students in School District 51 who are broadly identified as homeless, a number that soared nearly 55 percent compared to two years ago, when there were 388 students identified as homeless. But a small, passionate group of advocates like Howery are getting better at identifying and helping the all-but-silent population of homeless youth in Mesa County.

Howery and her coworker, Michelle Harmon, work for the district's Resources, Education, and Advocacy for Children who are Homeless (REACH) program. The program's impact is vital but limited, because REACH does not provide housing for youth or families.

"The main goal of the whole program is to remove school-based barriers for these children," Harmon said. "We make sure they have everything they need and all of the opportunities that their housed peers have."

That goal is federally mandated under the McKinney-Vento Homeless Assistance Act, which requires "immediate enrollment in school, even when students lack paperwork normally required for enrollment, such as school records, proof of guardianship, a birth certificate, immunization or other health records and proof of residence."

In District 51, the number of homeless students rose by 265 between 2014 and 2015, one of the largest increases in a school district its size.

Many reasons explain the jump in homeless students, according to Cathy Ebel, the district's prevention services coordinator.

After the Colorado Department of Education notified them in 2014 about low identification numbers, REACH staff began to better monitor the number of homeless students in each school and focus on face-to-face interaction with students.

"We don't look at it as a bad thing, and truthfully I couldn't tell you that the numbers of homeless youth have dramatically increased," Ebel said. "We're just paying closer attention to the identification."

Sometimes, identifying a student as homeless is about looking for the right signs, and sometimes the student is up front about their living situation, Ebel said.

"We have kids that'll come to the nurse assistant's office consistently with tummy aches or they're hungry or they're tired. Kids sometimes will fall asleep on their desks, and when asked will say 'I slept on the floor last night.'" Ebel said. "They'll come (to school) sometimes not as clean and well kept as they should be. Sometimes they'll just come right out and say it, 'We're sleeping in the garage.'"

The circumstances of homeless students and youth vary — some are sleeping in motels, on couches, in campers, or in a homeless shelter. About 36 students in District 51 are identified as completely unsheltered.

Other reasons for more homeless students could include a stagnant local economy and more students who are on their own, Ebel said.

"They're couch surfing or living with a friend, or an aunt has taken them in," Howery said.

Whether with or without their families, children and teenagers have very little choice about their circumstances.

"When you think about the causes of homelessness, it's almost never about the kid. It's about the adults," Ebel said.

Jade Joyce, executive director of HomewardBound of the Grand Valley, said in the last year, 223 youth stayed at the shelter with their families.

The simplest tasks take much longer for homeless people, Joyce said, because everything involves extra steps. Someone who is homeless can't walk to their basement and put in a load of laundry while they're cooking dinner — they have to load it up, transport it to a laundromat, and wait there until it's done. That makes everything more difficult for adults, Joyce said, much less for children.

"One of the things that helps with stability of youth is that they have a house so they can have consistency with homework time and dinner time. It's hard for them to have a homework time when they don't even have a desk," Joyce said.

HomewardBound doesn't accept unaccompanied youth. According to Colorado law, housing a youth without parental permission isn't offering a charitable service — it's harboring a runaway or kidnapping.

Tracking down the parents of unaccompanied youth is where teen homeless shelter The House steps in. Executive Director John Mok-Lamme said The House and its larger organization, Karis, experienced explosive growth since opening in 2012, with a budget that skyrocketed from $30,000 to just under $1 million today.

Once staff at The House have parental permission, teenagers can stay there for up to 21 days and benefit from individual and group therapy, access to medical care, educational and vocational training and transition services.

Mok-Lamme said with few exceptions, the 200 teenagers who have come through The House were abandoned by their parents.

"There's no youth that's choosing not to have a home," Mok-Lamme said. "It's almost a myth, that this child is tired of structure and would rather be free and on their own. They're at incredible risk for additional trauma, sexual assault, trafficking, increased mental illness and increased physical illness. So I think it's typical for a youth to get angry with their parents and storm out and take a walk. I don't think many youth decide to be homeless."

The House has 10 beds for teens, as well as several other programs that are more permanent. The Other House is a place for teens who are pursuing stability through jobs and education. It has similar services to The House, and teens usually pay rent. Zoe House offers therapy and services for youth victims of sexual assault, date and domestic violence.

District 51 does not directly offer housing, but refers people to the grant-funded Next Step program. Operated through the Grand Junction Housing Authority, Next Step offers rental assistance, security deposits, employment counseling and intensive case management for 30-40 families every two years.

Ebel said there are almost 400 homeless families with children enrolled in District 51.

"It's a great service, but it's minimal compared to how many kids we serve," she said.

SCHOOL A SOURCE OF STABILITY

The dedicated staff and volunteers at District 51 and Karis make it their mission to treat the effects of teen homelessness. For District 51, that's doing everything possible to make sure students graduate.

Harmon said some parents in homeless families view getting to school as a low priority. But school is where children and teens have the same schedule every day, can eat two hot meals and form relationships with their peers and stable adults.

"I can't blame the parents, because they're living in crisis all the time," Harmon said. "But they still have to understand that it is and should be a priority."

For the volunteers and staff at The House, ending teen homelessness boils down to four goals: "Safe housing, access to mental health services, the opportunity for employment and education and positive connections with healthy adults and healthy communities. That's our goal," Mok-Lamme said.

Mok-Lamme said he knows that teen homelessness can end in Mesa County.

"It's fundamentally a problem of relationship and connectivity. We need these teens to belong to healthy communities and we also need them to have some kind of transformative purpose, whether that's art, church involvement, a contribution they're making to a business," Mok-Lamme said. "We need our youth to belong to a community and then have the opportunity to build lives of meaning."

Ebel said looking at the causes of homelessness is beyond the scope of what REACH and District 51 can influence.

"We're helping to mitigate situations, but in terms of preventing homelessness, you've got to go a lot further back than what we have access to. It's about the mental health, the economics, it's about a lot of different family dynamics and a lot of things that adult-serving organizations are trying to mitigate," Ebel said.

Mok-Lamme said causes of teen homelessness run the gamut from childhood trauma, sexual assault, drug use in the home, domestic violence and neglect.

"We can make sure that every homeless youth in Mesa County receives services and has the opportunity for safe housing," Mok-Lamme said. "We can end teen homelessness in Mesa County. What is more difficult to do is to address the causes."

'ASK BEFORE YOU ASSUME'

The children, teenagers and families who benefit from Karis and REACH are not the people who panhandle on the side of the road.

"One of the misconceptions we have is that our homeless families are like the people you see on the side of the road with signs. The vast majority of our families are working poor," Ebel said. "The housing here — with the disparities between pay and the cost of living — is crazy. The vast majority of our families are good, hardworking families trying to strap themselves back up to be self-sufficient. Our kids are smart and engaged. These are not just families that are taking, they are families that really need help and are putting it to good use."

Howery said most of the time, homeless students are invisible because they want to be. That also makes it harder to help them and their families.

"Even the elementary kids are aware enough that they're not going to tell you they're living in a garage or a basement," Howery said. "Nobody knows about them, but they need to, because quite honestly we need help."

Howery said it's as simple as starting a conversation, asking questions before assuming the worst.