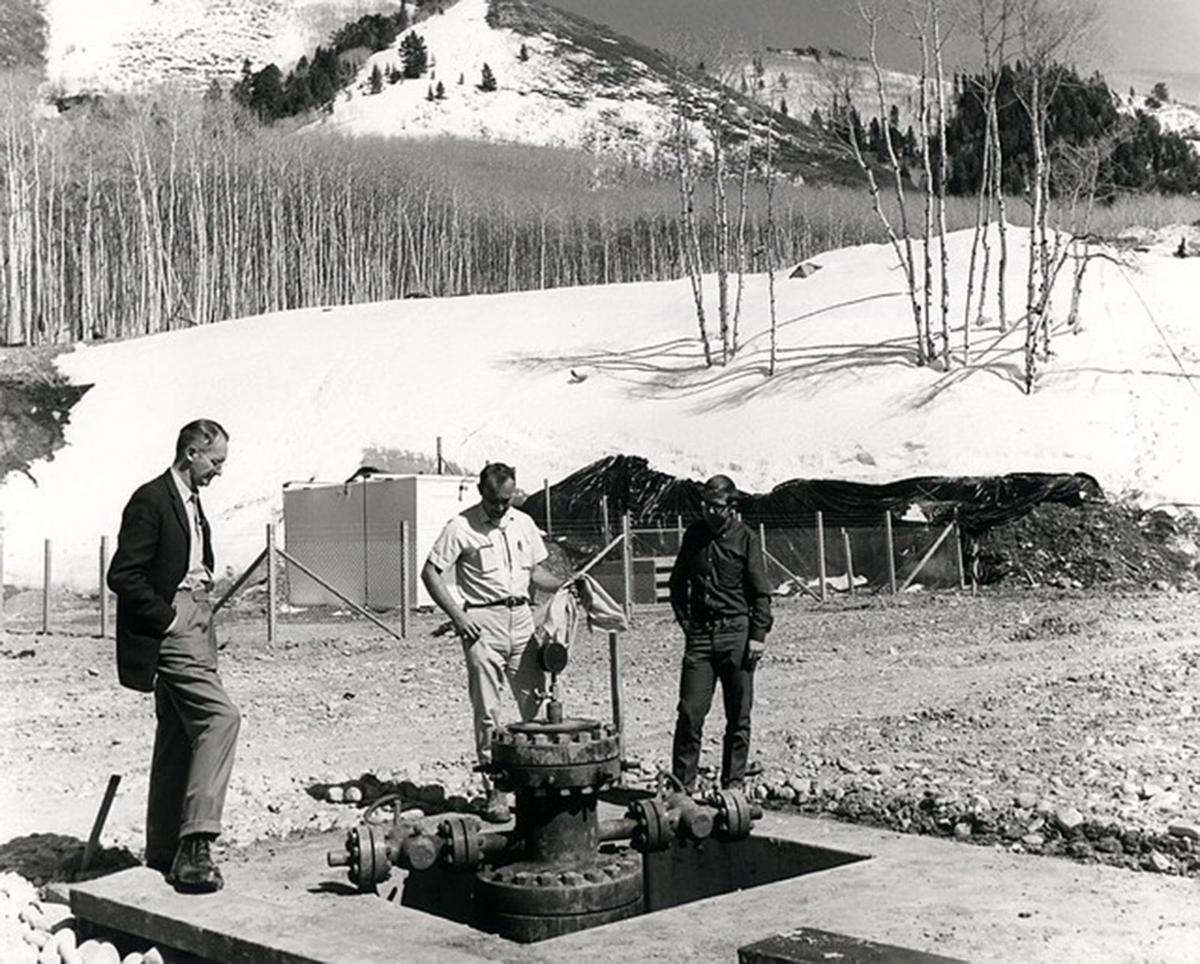 Photo courtesy of U.S. Department of Energy Officials look over the device before it's dropped into the ground. 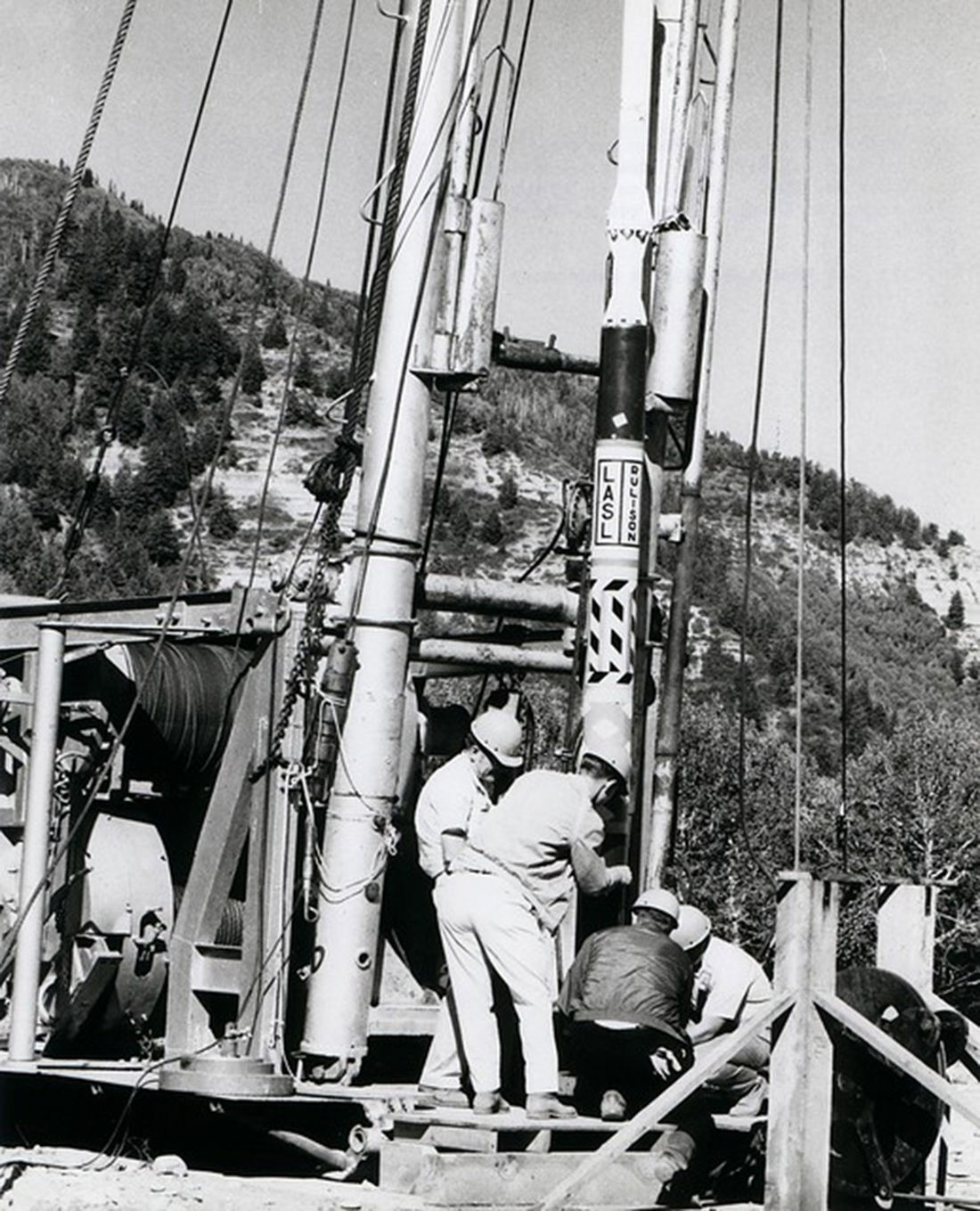 Workers prepare the explosive device for the 1969 Project Rulison test in Garfield County. U.S. DEPARTMENT OF ENERGY/Special to the Sentinel 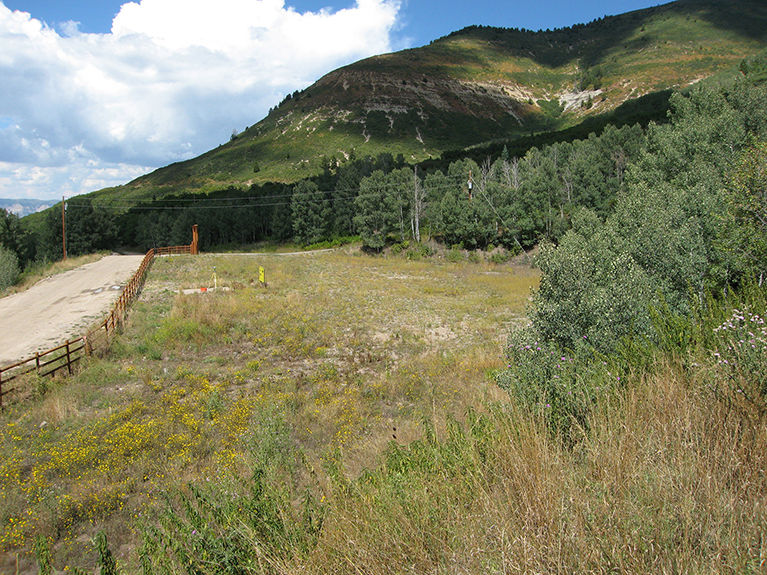 Photo courtesy of U.S. Department of Energy The 1969 Project Rulison test site as it looks today.

Photo courtesy of U.S. Department of Energy Officials look over the device before it's dropped into the ground.

Workers prepare the explosive device for the 1969 Project Rulison test in Garfield County. U.S. DEPARTMENT OF ENERGY/Special to the Sentinel

Photo courtesy of U.S. Department of Energy The 1969 Project Rulison test site as it looks today.

His memory remains sharp, especially when it comes to the events that occurred in Garfield County 50 years ago on Tuesday, on Sept. 10, 1969.

He clearly remembers lying on the ground in the Doghead Mountain area south of Rulison, along with another activist, Margaret Puls. They braced themselves, fear in their eyes, awaiting an underground nuclear blast about two miles from them that their act of civil disobedience had failed to stop.

They didn't know what was going to happen, McQueary said.

That's when they felt the Earth move.

"There was a tremendous whump," he said.

He said the event felt like lying next to railroad tracks when a train comes through. The blast lifted him perhaps 6 or 7 inches. It was followed by aftershocks, lasting maybe a minute or two.

Armed with binoculars to anxiously look for surface venting from the explosion, they instead saw dust from rocks being dislodged from the cliffs of Roan Plateau across the Colorado River Valley.

The two had just experienced what was called Project Rulison, an experiment by the U.S. Atomic Energy Commission as part of the Plowshare Program. The program was aimed at investigating possible peacetime uses for nuclear blasts, such as building canals or blasting highway routes through mountains.

Project Rulison's purpose was to see if nuclear energy could be used to free natural gas from the low-permeability sandstone formations containing rich gas reserves in western Colorado's Piceance Basin. That sandstone subsequently has been targeted by energy companies who have drilled thousands of wells and produced gas through hydraulic fracturing.

In 1969, though, the Atomic Energy Commission made use of a 40-kiloton nuclear bomb set off in a well 8,425 feet underground in its gas- development foray.

On the event's 40th anniversary, Cristy Koeneke — the granddaughter of Claude Hayward, on whose land the government conducted its experiment — described to The Daily Sentinel watching the ground ripple like an ocean wave toward where she watched several miles from the blast site. News reports in 1969 described rocks falling on area roads and a slight tremor being noticeable even from Grand Junction.

According to the commission's successor, the Department of Energy, the blast's heat vaporized rock and created an underground cavity. Fractured rock collapsed into it, forming a rubble-filled chimney. A second well drilled into that chimney produced 455 million cubic feet of gas over 107 days of testing in 1970-71. The gas was flared to the atmosphere and, while the concentrations of radionuclides dropped off during the production, it remained too radioactive to be marketable.

The experiment wasn't the only one of its kind. Project Gasbuggy took place in New Mexico in 1967. In 1973, the energy commission set off three nuclear devices almost simultaneously in a well southwest of Meeker in Rio Blanco County. It also produced gas that decreased in radioactivity over time, but the fracturing from the explosions didn't extend as far outward as predicted, the Department of Energy says.

Emily Hornback, staff director of the Western Colorado Alliance, said Project Rulison is a great example of something that gets approved without understanding the implications involved, and the consequences that can linger for decades.

"The whole thing's a parable of good ideas gone wrong," she said.

Project Rulison's lingering consequences primarily have centered on the question of what level of oil and gas development can safely occur around the site. Both it and what's called Project Rio Blanco remain under the oversight of the energy department's Office of Legacy Management. In 2010, the department released what it called a Rulison Path Forward report, saying there's been no evidence that contamination from the blast site has migrated or ever will beyond the 40 acres surrounding the blast site. It retains control of the subsurface rights below 6,000 feet on those 40 acres, prohibiting drilling beneath that depth.

Padraic Benson, a program analyst with the Office of Legacy Management, said the Department of Energy does gas, surface and groundwater testing for radioactivity in the area, including testing gas produced by privately drilled wells within a mile of the test site. None of the tests has detected radioactive contaminants — specifically tritium, the contaminant of concern at this point.

The Colorado Oil and Gas Conservation Commission also is involved in overseeing drilling around Project Rulison. It has certain testing requirements for gas wells within a mile of the blast site.

Until 2017, it had a second level of required testing for wells within three miles, or 25 square miles. But it then shrank that to a smaller, oval-shaped, 6.3-square-mile zone, saying the larger area was arbitrary while the smaller one aligns with fracture patterns in the gas-bearing sandstone.

It also eliminated ground and surface water testing in the area, saying gas production is the only credible way of transporting Project-Rulison-related contaminants to the surface and already must be tested.

Those changes have concerned the Western Colorado Alliance and the Garfield County-based Grand Valley Citizens Alliance.

"It's just like, why risk it," said Hornback, whose concerns harken back to the idea that Project Rulison even went forward.

"People went right along with it, thinking it would be safe," she said.

McQueary was among a small contingent of people who questioned the wisdom of the nuclear test strongly enough to try to put their bodies in the way of it going forward. The energy department had worked to make sure residents were cleared from a miles-wide safety zone around the blast site. So McQueary and other protesters figured that the government wouldn't go forward with the blast if it knew protesters were in the area. Eleven of them were on the mountain the day of the blast, scattered in small groups so authorities couldn't remove them all at once.

Shortly before the blast they set off flares to make sure their presence was known. McQueary remembers a military helicopter showing up where he and Puls were, its occupants apparently motioning to go to a spot where the helicopter safely could land. The two ran in the other direction, but not before McQueary saw a soldier furtively flashing them a peace sign.

A court challenge of the planned blast involving opponents including attorney Tom Lamm, and his brother, eventual Colorado Gov. Richard Lamm, also failed to stop the blast. And the Rio Blanco County experiment proceeded later despite opposition that included an effort by Chuck Worley, a founder of what's now the Western Colorado Alliance, to unfurl a protest sign across Rifle Gap near Rifle, using cable that the artist Christo had placed there for his Valley Curtain installation.

In 1974, however, McQueary was part of a successful ballot initiative that requires state voter approval of nuclear explosions in Colorado. He concedes it's questionable whether the federal government would feel bound by such a limitation by a state.

"It's never been tested," he said.

Reflecting on the legacy of undertakings like Project Rulison and Project Rio Blanco, and the debate that surrounded them, Benson said, "I think with the advent of atomic energy you see in the public two conflicting responses that last to this day.

"On the one hand there's this hope, there's this new technology, incredibly powerful, that could be harnessed for almost utopian dreams. I think that's what Plowshare was coming out of, was this notion of, 'we have the technology available to apply this incredible power, think of what we can do for humanity.'

"But conversely at the same time I think that the advent of atomic energy and the realization that humankind has this power within their hands created a fear at the same time.

"… For the Office of Legacy Management, I think the takeaway for us is no matter what you think about the original projects that happened, the sites that need long-term stewardship we're there for. We're there to monitor and make sure that communities in the area and the environment are protected."

McQueary ended up moving to the Rulison area and living there for 30 years. He was involved there in a beekeeping operation and said he was less worried about environmental impacts from Project Rulison than potential impacts from a hydraulically fractured gas well close to his house.

These days, he finds new things to worry about, from climate change to what he said is an unchecked U.S. nuclear modernization program.

"This whole environment that we're in now is extremely dangerous, I think," he said.

For Koeneke, now living in Arvada, the after-effects of Project Rulison linger. She continues to feel the government took advantage of her grandfather, convincing him to sign over the right to conduct the blast on his land when he was in his 70s, under an agreement to pay him $100 a month if it produced payable quantities of gas.

She said he died of an aggressive cancer a few years after Project Rulison, and she suspects a possible cause was the flaring conducted in connection with the project within a half-mile of a cabin where he spent summers. The energy department says that flaring was done between October and April, and monitored by authorities including EPA and state health and environmental officials.

Koeneke's family sold the land where the blast occurred. Despite the subsurface control it granted to the energy department on the 40-acre parcel, it retained mineral rights there, and on 360 adjacent acres, she said.

The oil and gas conservation commission requires a hearing for drilling within a half-mile of the blast site, and so far no wells have been drilled there. Much of the drilling more broadly around the area occurred when gas prices were higher and companies were more active a decade ago.

Koeneke long has contended the energy department should compensate her family for the gas that was flared and the other minerals it owns that never were developed or produced royalties.

"Fifty years later we're still sitting there harmed," she said. "That income to our family could have been life-changing, life-altering."

A discussion about the Project Rulison nuclear blast will be at 6 p.m. on the blast anniversary today at the Grand Valley Recreation Center in Battlement Mesa.

Chester McQueary, one of the protesters who tried to stop the explosion, is organizing the event. Speakers will include protesters at the time and people living in the area when the blast was set off.