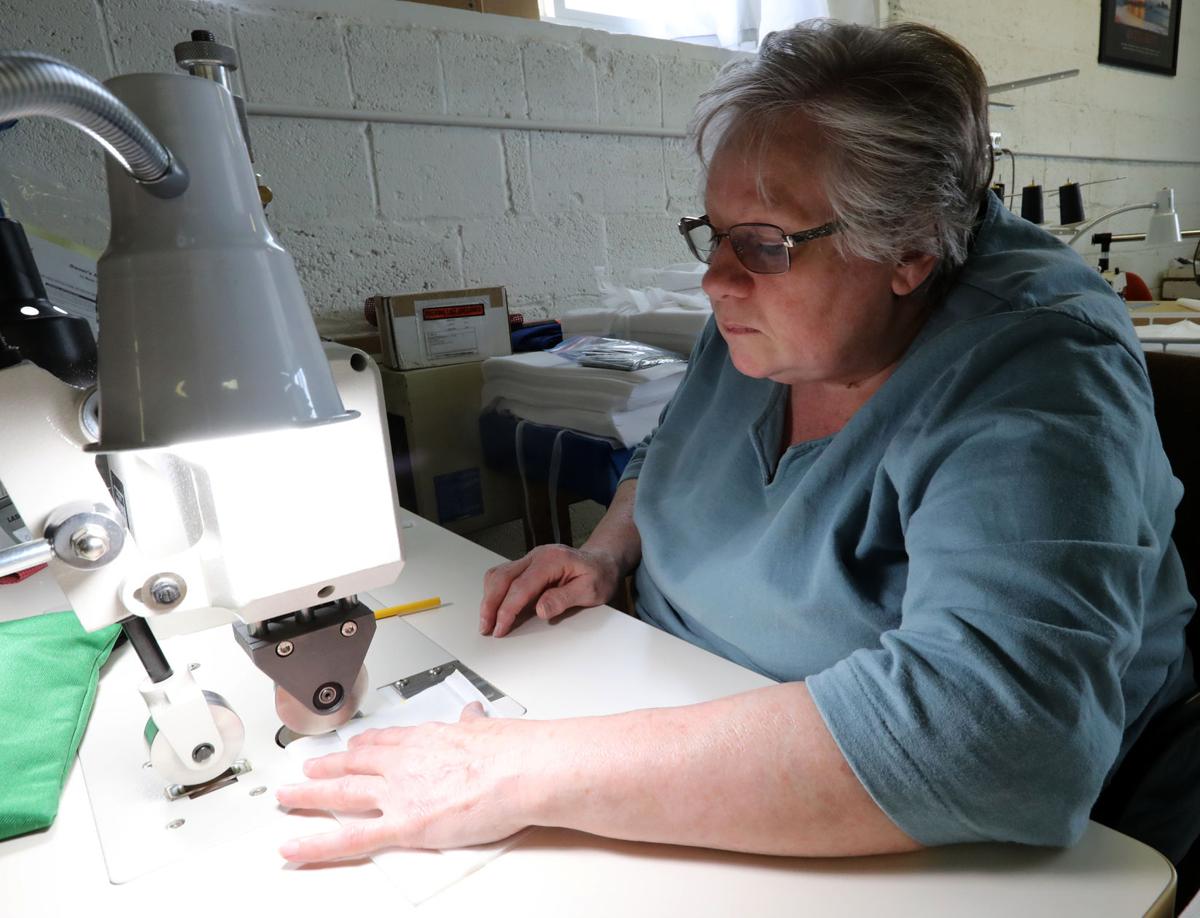 Melinda Stockman, a seamstress with ProSafe Products, welds a disposable face mask on the job at ProSafe Products. The company is making personal protective equipment and has been doing a lot of business, including helping to supply gowns and masks locally. The company at 830½ Seventh St. is owned by Laura Bradford, a former state legislator. 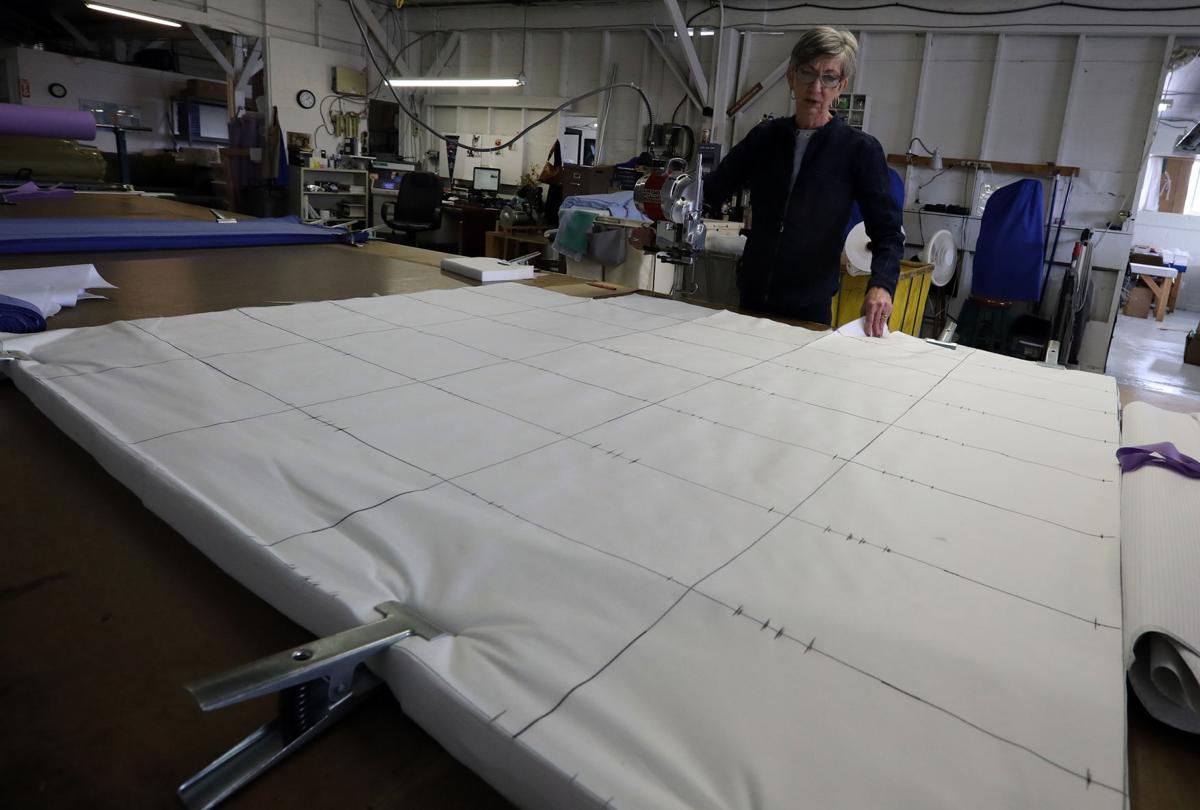 Laura Bradford and her company, ProSafe Products, are making personal protective equipment, including surgical masks that are suddenly in short supply.

Melinda Stockman, a seamstress with ProSafe Products, welds a disposable face mask on the job at ProSafe Products. The company is making personal protective equipment and has been doing a lot of business, including helping to supply gowns and masks locally. The company at 830½ Seventh St. is owned by Laura Bradford, a former state legislator.

Laura Bradford and her company, ProSafe Products, are making personal protective equipment, including surgical masks that are suddenly in short supply.

Former Grand Junction state Rep. Laura Bradford is answering a call to serve the citizens of Colorado once again, but this time it isn’t to run for political office.

Bradford, who served three terms in the Colorado House from 2008 until 2013, has converted part of her Seventh Street sewing business, ProSafe Products, into making surgical masks and other needed medical items because of a nationwide shortage caused by the COVID-19 pandemic.

Until the coronavirus crisis hit the nation, Bradford’s firm was specializing in gowns, disposable face drapes and other products meant for the dental industry.

But about 18 months ago, a supplier in Canada that’s she’s long worked with contacted her about the possibility of using a special fabric it had to make reusable facemasks, isolation gowns, lab coats and hospital scrubs.

That new fabric, which had received the go-ahead as an approved medical device from the U.S. Food and Drug Administration not long before, contains an antimicrobial that inhibits bacteria growth, making it 99.99% more effective than traditional fabric for antibiotic resistance.

On Friday, Bradford sent 6,000 masks to that distributor.

While Bradford and her 16 workers — she recently doubled the size of her workforce because of all this — were busy doing that, someone from St. Mary’s Medical Center contacted her two weeks ago about getting personal protective equipment.

Initially, Selendic asked Bradford if she could make disposable facemasks. Bradford showed him the masks she was making with the new fabric, but Selendic said he didn’t know enough about that material to get approval as masks (the hospital has since put in an order to purchase 500 hospital scrubs using that fabric).

Eventually, the two went through four different prototypes for disposable masks, and now Bradford’s company is making 5,000 for St. Mary’s, with more orders likely to come.

“We started looking at where we were seeing struggles for supplies because it was already starting to hit us even before we started seeing patients,” Selendic said. “We ended up having to look for alternative sources for products. I’m impressed and surprised at the local response to the hospital, and this just is a really good example of a community trying to come together to provide a resource to the hospital so we can do what we need to do to care for patients.”

Selenedic said that while some PPE suppliers have increased their prices for such high-demand items, what Bradford is charging them is about what the hospital normally pays for such things.

And as a side benefit to Bradford being able to create more jobs, she’s also purchasing as many other needed materials as she can locally.

For example, when making the masks, something her company never did before, she had to figure out how to sew in the metal strip that is needed to form-fit such masks to a user’s nose.

To do that, she reverse-engineered some other company’s mask and researched the kind of metal needed to make that work.

“I go down to True Value and said I need this metal, and my good buddy at 12th and Orchard, Brad, he goes, ‘It’s aluminum roofing flashing. How many rolls do you want?’” Bradford said. “I brought that down to All Metals Welding and I handed them one of the little pieces that I had taken out of an already produced commercial facemask and said, ‘I want to turn these rolls into this.’ They did.”

Since then, other contacts Bradford made while in the Colorado Legislature have come to her with similar requests, people with the Colorado Hospital Association, Montrose Memorial Hospital and groups that represent various nursing homes around the state.

Bradford asks that people don’t try to come to her shop to buy masks. Not only doesn’t she sell retail, all the orders she has are already spoken for.

“I’m reaching out to the old contacts that I had to take care of Colorado first as much as I possibly can,” she said. “And that’s only because of my old Rolodex.”