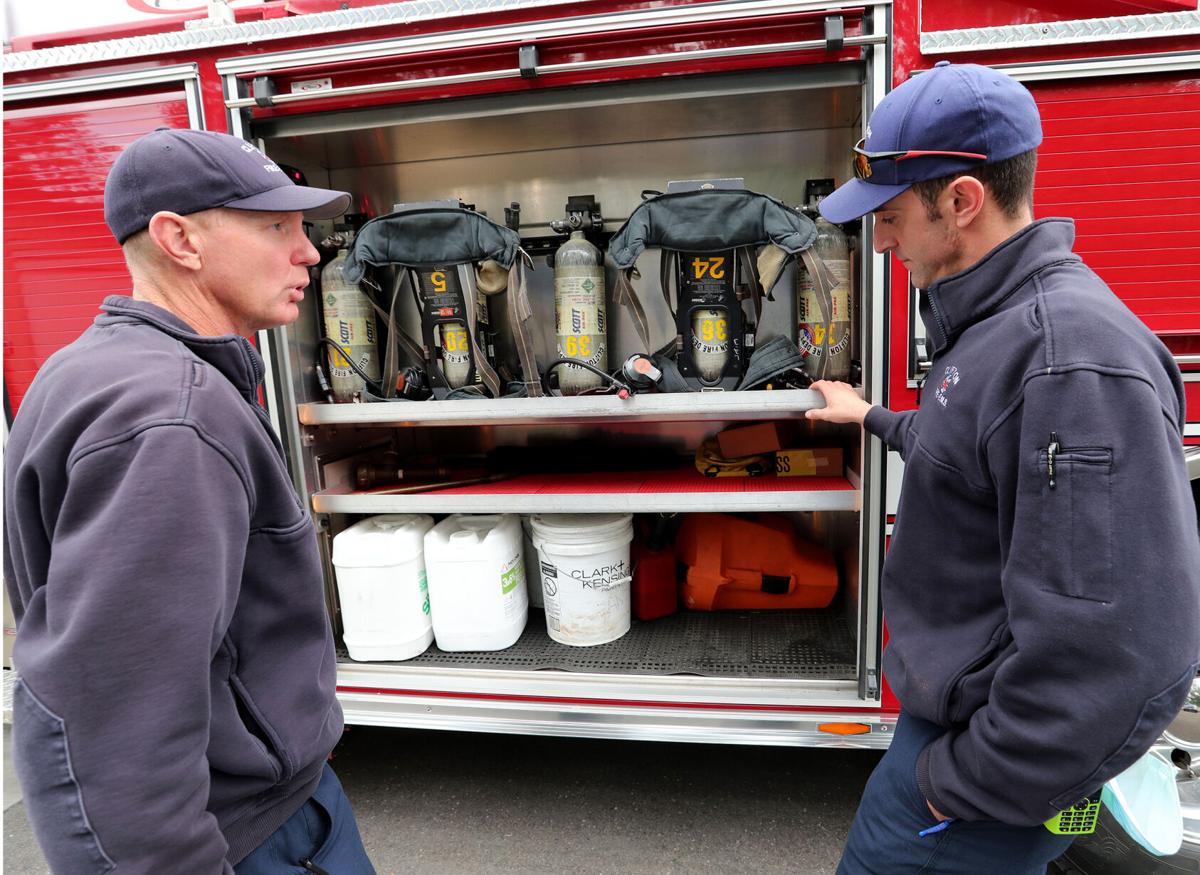 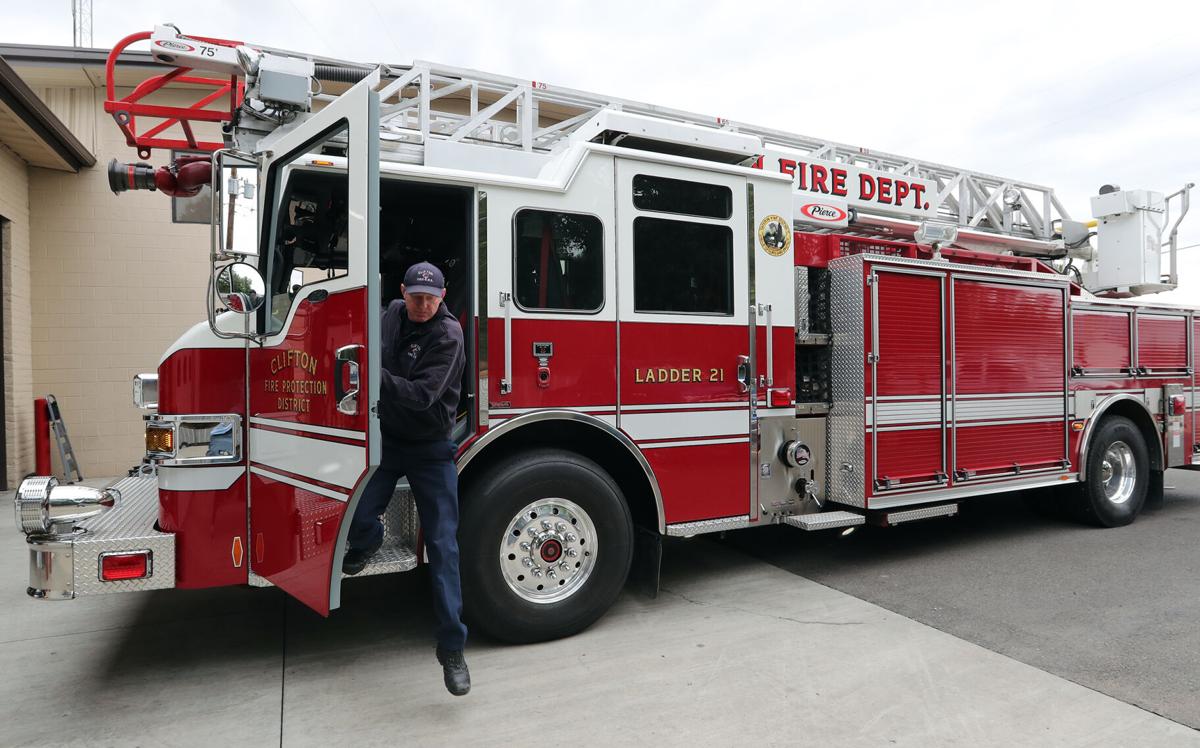 Capt. Shawn Seacrest on ladder truck No. 21 at the Clifton Fire Department. 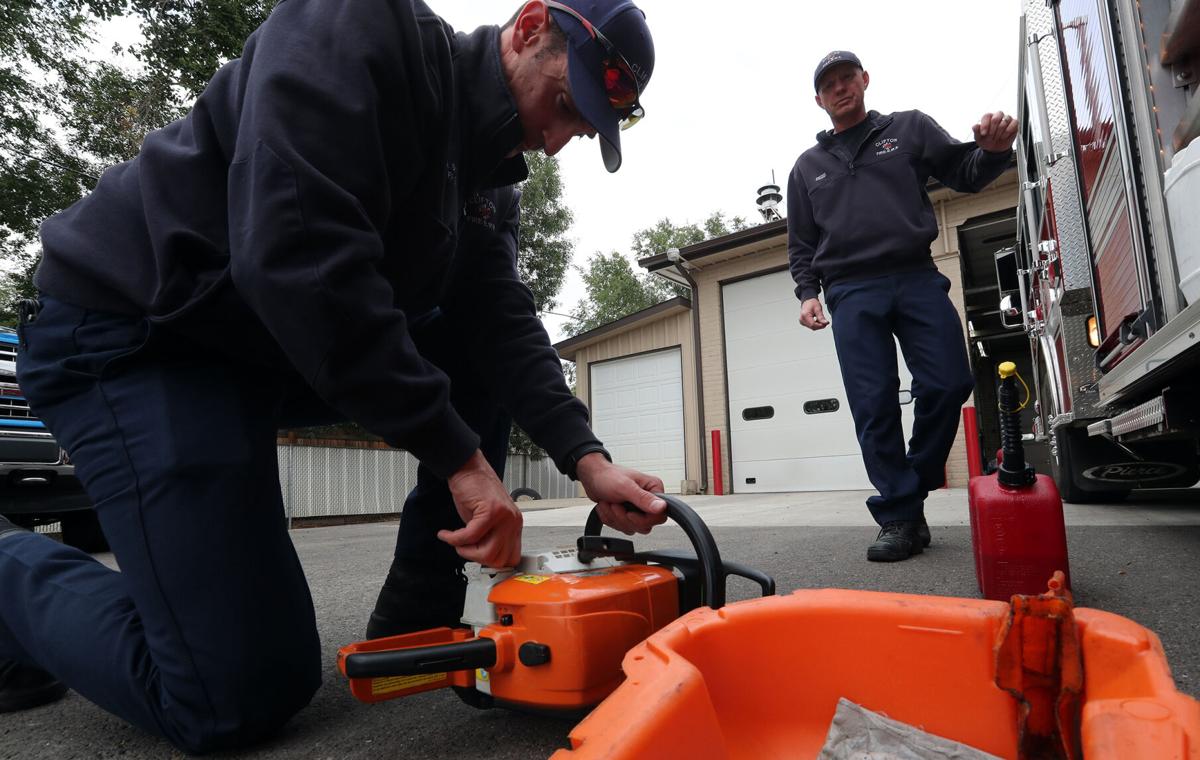 Capt. Shawn Seacrest, right, and firefighter/EMT Masson Sturgill work in one of the equipment bays on truck No. 21 at the Clifton Fire Department. Proponents of a measure to repeal the Gallagher Amendment say the repeal is necessary if property owners want to maintain an adequate level of fire and police service, among other amenities.

Capt. Shawn Seacrest on ladder truck No. 21 at the Clifton Fire Department.

Capt. Shawn Seacrest, right, and firefighter/EMT Masson Sturgill work in one of the equipment bays on truck No. 21 at the Clifton Fire Department. Proponents of a measure to repeal the Gallagher Amendment say the repeal is necessary if property owners want to maintain an adequate level of fire and police service, among other amenities.

Amendment B, the measure on this fall’s ballot to repeal the Gallagher Amendment, starts out saying that property tax rates would be frozen and not increase, but that doesn’t mean homeowners won’t end up paying more in property taxes.

Under the measure, the state’s current property tax rates would remain frozen, 7.15% for residential and 29% for commercial. What that means, however, is as property values rise, the amount of money both types of property owners pay will go up, though it would be less in areas where values aren’t climbing as high, as they are on the Front Range, both proponents and opponents of the amendment agree.

To the proponents, that increase is needed because the Gallagher Amendment and its caps on property tax rates for homeowners and businesses is resulting in an ever-dwindling revenue source for local governments, particularly in rural counties and special districts that rely heavily, if not entirely, on property tax revenues.

Proponents are quick to add that because of the Taxpayer’s Bill of Rights, those rates can’t be increased without approval by voters. Doing so would mean even higher property tax bills.

“TABOR still will rule,” said Kent Thiry, who’s working with the campaign for the measure. “No one can raise anyone’s property tax rates without a vote of the people.”

While opponents of the measure say the amendment is particularly troublesome for homeowners already strapped for cash because of the COVID-19 economy, proponents say it’s necessary if those property owners want to maintain an adequate level of services provided by county governments and special districts for such things as libraries and schools, fire and police and water and sewer.

Prior to that time, residential property tax rates were going through the roof, getting as high as 44% at one point. While that rate dropped to 21% of the assessed value of a home by the time the Gallagher Amendment was approved, since then it’s gone down much further, to the current 7.15%. If Amendment B isn’t approved, that rate is expected to drop again, to 5.88%.

“There was an enormous revolt up and down the Front Range about increases in property taxes,” Stewart said. “People were coming out to public meetings for state senators and state representatives — 500, 600 people — because they were intolerant of the kind of tax increases that were occurring. That’s what Gallagher has changed. There are ways to tweak Gallagher to make it better, but rather than doing that hard work, I think the Legislature had taken this more simplistic, throw-the-baby-out-with-the-bathwater sort of approach.”

Under Gallagher, the proportion of property taxes collected by local governments from residential and commercial property is to maintain a 45% to 55% split, respectively. At the same time, however, Gallagher froze the commercial rate at 29%, meaning that as property values increase, the only way to maintain that 45-55 balance was to lower the residential rate.

Under Amendment B, that commercial rate would stay the same, but it now is four-times higher than the burden on residential property.

While increases in property values theoretically means more tax revenues are collected, in many areas of the state that increase hasn’t kept pace with the cost of services, particularly for special districts that have more residential property within their boundaries than commercial, such as the Clifton Fire Protection District or Mesa County Libraries.

As a result, Gallagher has created a dramatic reduction in the total amount of tax revenues that local governments and special districts collect, particularly those in rural parts of the state that don’t have the rising property values seen on the Front Range, which the residential rate is based on, proponents say.

“Forty years ago, it made sense,” Thiry said. “It just is unfair now to have a statewide formula that dramatically impairs the ability of a bunch of localities to govern in a coherent way. It hurts rural districts. Hospital districts, fire districts, ambulance districts. A statewide formula forcing all that kind of economic dislocation in half the counties, any county that’s below average in growth, makes no sense.”

Opponents to the measure agree that’s an issue, but argue a full-on repeal of Gallagher isn’t the best solution.

They say a better one is what local governments have already been doing under Gallagher and the Taxpayer’s Bill of Rights: Going to their voters to request higher mill levies to allow them to increase the amount of revenue they can take in.

Proponents, however, say that hasn’t worked.

For one, voters in some jurisdictions have approved automatic mill levy increases to make up for the lower residential property tax rate, allowing them to make up any loss in revenue. Doing so, however, means that all pay more, particularly businesses, which some proponents says now have an unfair tax burden.

“Gallagher has disproportionately affected our part of the state, and a lot of that is because a lot of the essential services that citizens rely on are funded through property taxes,” said Rep. Matt Soper, R-Delta, one of a bipartisan mix of lawmakers who placed the measure on the fall ballot, including Rep. Janice Rich, R-Grand Junction.

“One thing that I saw right away is that Gallagher is fundamentally flawed,” Soper said. “It’s based on a formula that sets a statewide property ratio based largely on Denver and Boulder, and that just doesn’t work. Why should multi-million dollar homes in Cherry Hills Village essentially be paying a lower rate than, say, Grand Junction, Delta or Montrose? That’s just not fair.”

While state government doesn’t take in property tax revenues, the Gallagher Amendment has greatly impacted its budget. Under it, the state is require to backfill to public schools any reduction in property taxes collected by school districts, which account for about half of all collected property taxes.

In 2007, then Gov. Bill Ritter instituted a controversial property tax rate freeze on school districts, meaning any district that had a mill levy of 27 or lower could no longer lower their mills, something districts routinely do when residential rates go down.

Some districts, however, were doing that for the sake of their local taxpayers, knowing that the state would have to replace any lost revenues. As a result, the percentage of the state’s budget that goes to K-12 education rose from about 40% when Gallagher was approved by voters to more than 66% today, according to the Colorado Legislative Council, the research arm of the General Assembly.

Having to put more money into education means less is available for other government services, such as transportation, prisons, health care and human services.

That mill levy freeze, which was upheld by the Colorado Supreme Court in 2009, would remain in effect even if Amendment B passes, but it only impacts school districts. There is no such freeze for special districts.

On the other side, opponents range from Michael Fields, the former Colorado head of Americans for Prosperity and now head of the right-leaning Colorado Rising Action, former House Speaker Dickey Lee Hullinghorst, D-Boulder, and former state Sen. Dennis Gallagher, for which the amendment is named.

On Wednesday, another opposition group, Protect Our Homes Colorado, filed a lawsuit against legislative leaders for changes they made to the state’s Blue Book, the Legislature’s official description of statewide ballot measures.

The Colorado Constitution requires that book to be fair and balanced, but the opposition group said the legislative leaders, the people who placed the measure onto the ballot, has unfairly tilted it to favor their side.

They hope to get a judge today to approve an injunction to delay the book from being published until changes are made. It is set to go to the printers later today.