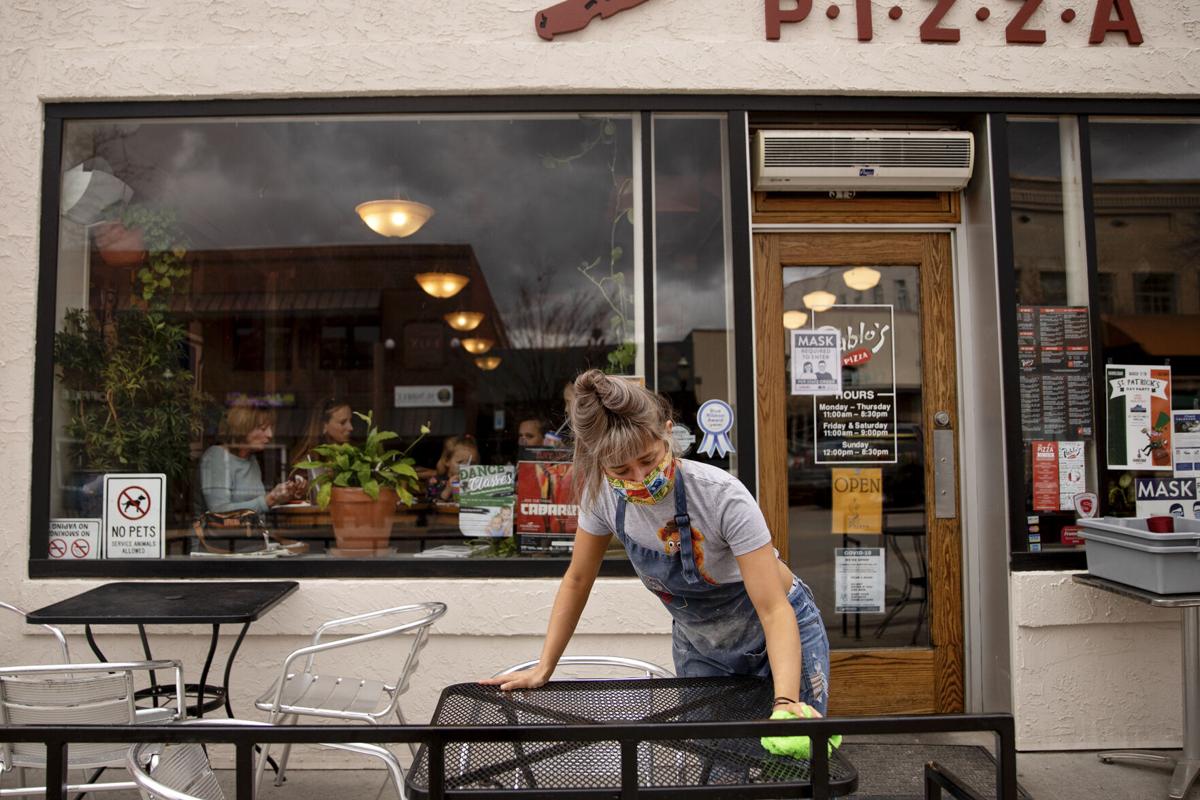 Lily Hanna, an employee at Pablo’s Pizza, 319 Main St., wipes down a patio table during her lunch shift on Tuesday. 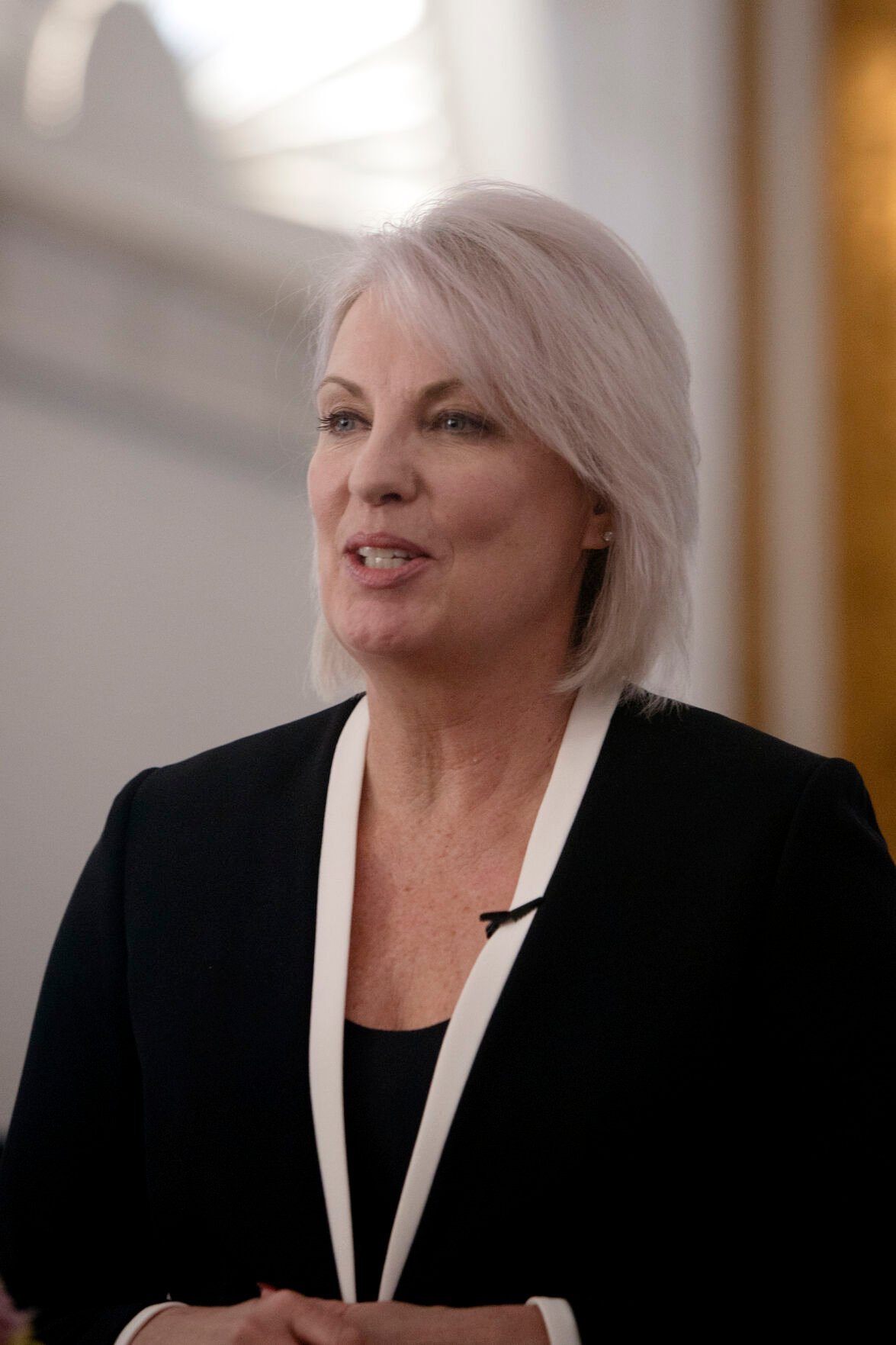 Lily Hanna, an employee at Pablo’s Pizza, 319 Main St., wipes down a patio table during her lunch shift on Tuesday.

The Mesa County commissioners were expecting to do battle with the state over a plan to fully reopen the county by the middle of next month, but Gov. Jared Polis isn’t fighting back.

Instead, the governor fully expects that what the Mesa commissioners want to do is entirely appropriate, at least by then.

As the state continues to ramp up the number of people who have access to one of the coronavirus vaccines, counties need to starting planning now for simultaneously opening up their economies, the commissioners say.

Polis agrees, adding that he’s expecting to announce next week major changes to state public health guidelines, and who gets to make those decisions.

“The default will be going to the county level relatively soon, in the next few weeks,” Polis said Tuesday. “That’s because the state’s nexus in this is, our emergency is preventing hospitals from exceeding capacity, and we’ve done that successfully. As long as counties are not exceeding their hospital capacity with COVID patients and non-COVID patients in need of hospitalization and dying needlessly, we encourage that kind of flexibility at the county level.”

The county’s plan is to remove all COVID-19 restrictions sometime around the middle of April, or sooner if possible, allowing all businesses, entities and residents to decide for themselves if they want to continue following public health orders, such as wearing masks or social distancing.

“This is based on science,” said Commissioner Janet Rowland, chairwoman of the three-member panel. “We selected mid-April specifically because of the timing. This will allow everyone to wants to have a vaccine to have access to it by then, so it’s not just a random, we’re sick of this, we’re done, which we are. But it’s time-based on the science behind it.”

By the middle of next month, at least half of the county’s residents — and possibly more — are expected to have received at least their first dose of the vaccine, and far more than that among the most susceptible to serious illness or death from the virus.

As of Tuesday’s report from County Health, 46,255 doses have been administered to Mesa County residents, a figure that is expected to triple by the middle of next month. Of those, 31,435 were first doses and 14,820 county residents have received both doses. Just last week the county administered 5,104 doses.

Mesa County Public Health intends to open up access to the vaccine to everyone next week, about three weeks sooner than what the state plans.

Even though the state isn’t officially opening up access to the vaccines to people age 50 and over and a slew of others, such as restaurant workers, until Friday, Health Department Director Jeff Kuhr actually did that last week.

All along, Kuhr has made the vaccine available to far more groups than what the state has outlined, primarily because he wants to make sure every dose the county receives gets used. He has repeatedly said that it makes no sense to try to finish up one group before moving on to the next.

Statewide, 77% of Coloradans 70 and older have received at least one dose of the vaccines, far more than what state public health officials initially expected.

Most of what the county plans to do is outlined in a letter sent to Polis this week, which says that the time has come for each county — and not the state — to decide for themselves what restrictions to place on their residents.

Currently, 49 counties — including Mesa and all other counties in the region — are now in the “blue” category under the state’s COVID-19 alert dial. That’s just one level above the least restrictive “green.” category.

Part of qualifying for that lesser category is having ample hospital bed space. Currently, Community Hospital has no COVID patients, and St. Mary’s has four, only one of whom is in its ICU ward. At the same time, the county’s one-week average positivity rate is down to 1.2%, while it’s seven-day incidence rate is at 42, the lowest it’s been since the county’s first real surge last fall.

The problem with the state’s dial system, Kuhr said, is it still only allows businesses and public places to be open to no more than 50% capacity regardless of what category a county is in.

Kuhr says the time is right to go to 100%, adding that he’s expecting the state to revise that dial soon so counties can plan accordingly. Polis said he expects that to happen as early as next week.

Some commissioners were expecting to get more pushback from the state, much like it did when Mesa County started its Five Star Program, one that allowed for more openness for those establishments that followed all state-mandated public health orders.

“Because of some egos, my guess is we’re going to meet with some stiff resistance regarding executive orders,” Commissioner Scott McInnis said. “Their statements will be true that they can preempt local counties, et cetera, et cetera, but I think once they start looking at the facts and once the other counties start saying, ‘Wait a minute. You know? We need to consider this, governor.’ This letter will make a difference.”

Kuhr agreed, saying he’s still planning on encouraging — but not ordering — residents to wear masks and practice social distancing when in public places.