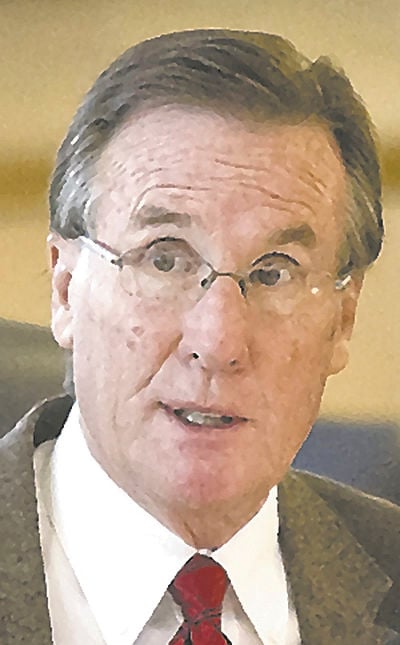 TOM JANKOVSKY "In my opinion this is a gun to our head."

TOM JANKOVSKY "In my opinion this is a gun to our head."

Wear a mask and take the pandemic seriously if you want to keep the county open for business, Mesa County commissioners say.

In issuing the county’s first official public plea over the pandemic, the chairman of the Mesa County Board of County Commissioners, Scott McInnis, is asking residents to do what needs to be done to control the coronavirus, including refraining from putting themselves into close contact settings, staying away from confined spaces that have poor ventilation and avoiding being in the midst of large crowds or other places with a lot of people nearby.

McInnis said his hope is to forestall more places from having to shut down or seeing access limited to a higher degree because of an even greater increase in COVID-19 infections over the next few weeks.

“We urge residents not to ignore our responsibility as individuals and as a community to keep our families, friends and employees healthy and our economy running,” said McInnis, a Republican. “The increase in cases can be managed if we all do our part, right now. What we need is for our community to show solidarity by doing the right thing, using common sense, washing hands, wearing masks and avoiding the three Cs (close contact, confined spaces and crowds).”

Meanwhile, the Garfield County commissioners are pushing back on a state recommendation that it move from its current yellow alert to the higher orange level where Mesa County is now, at least until Friday when the county is to go to an even more restrictive red “severe risk” level.

While the Colorado Department of Public Health and Environment is recommending Garfield move to the higher-risk level, the commissioners say they aren’t there just yet, and doing so would be unfairly impactful on county businesses that still are trying to recover from the last shutdown.

The Garfield commissioners said the county’s test-positivity rate is only at 12%, three percentage points shy of what state public health officials have set for the orange level. Both levels are in the less stringent safer-at-home category, but the orange level is twice as restrictive on capacity limits.

Until recently, both counties had been doing far better in keeping the virus contained than elsewhere in the state. That, however, has changed.

While Mesa County has seen a two-week infection of nearly 2,000 cases, Garfield County’s two-week infections have more than tripled since the beginning of October, according to that county’s public health department.

Since the beginning of the pandemic, Mesa County’s three commissioners have been practicing what they preach in public meetings — and advising others to do so, too — but have stopped short of issuing a public plea.

Instead, they have tried to lead by example by wearing masks, practicing social distancing and allowing as many county workers as possible to work remotely.

Their goal from the start has been to keep the community safe without having to shut it down again, all that in the face of numerous defiant county residents, along with others in the state and nation, who continue to push back against what they see as unfairly restrictive public health orders that they maintain violate their personal liberties.

Since March, the commissioners have tried not to politicize the pandemic, saying they would follow whatever public health orders are issued by the Mesa County Board of Public Health and Jeff Kuhr, executive director of Mesa County Public Health, getting weekly COVID updates from him for months now at the start of their Monday meetings.

“This is a call for action,” McInnis said. “Let’s work through this together to keep Mesa County open.”

A revised statewide pandemic color-coded restrictions dial is designed to allow counties to impose public health rules without having to shut down local economies completely. Under its new red level, only a few businesses that cater to groups, such as bars and restaurants, will be impacted. That new order also comes with an 8 p.m. last call for alcohol for on-premises drinking, rather than the current 10 p.m.

The new red level that Mesa County and other counties statewide are expected to go to on Friday means that some indoor activities, such as gyms, would be limited to 10% capacity, while others, such as churches, must reduce to a 25% capacity level, but with a 50-person cap.

While the re-minted red level asks people to stay at home as much as possible, including working from home if their jobs allow, it isn’t the same draconian stay-at-home level the county and state went through in the spring.

The new level still allows previously deemed essential businesses to remain open, such as grocery stores. It also allows for non-essential retail establishments to remain open, too, but at a 50% capacity and using curbside sales or delivery as much as possible.

All require patrons to wear masks and maintain their distance from others, according to state public health guidelines.